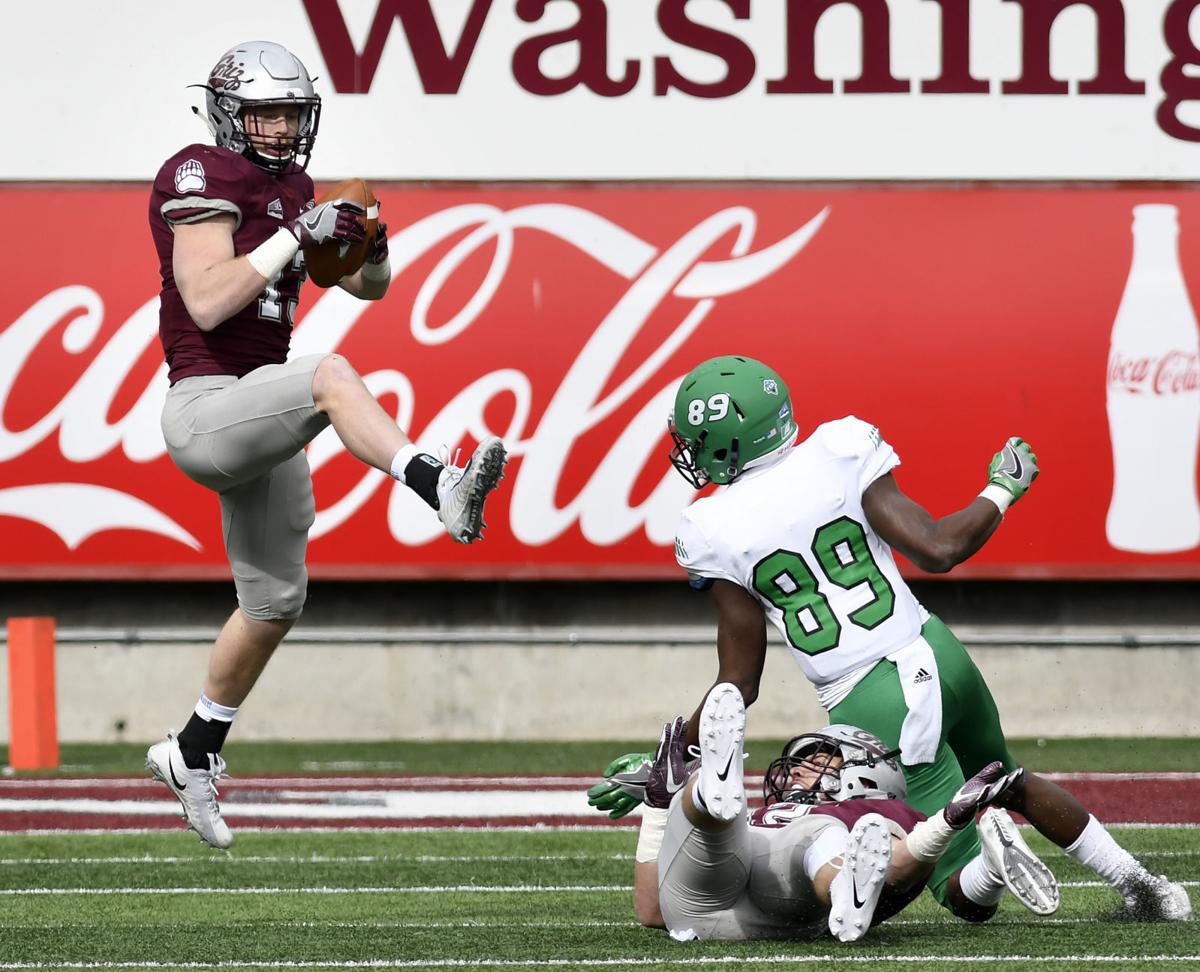 Montana safety Josh Sandry, left, intercepts a North Dakota pass in 2017. The Bigfork native returned the ball 74 yards. Sandry is one of 42 players from Montana on the Griz roster. 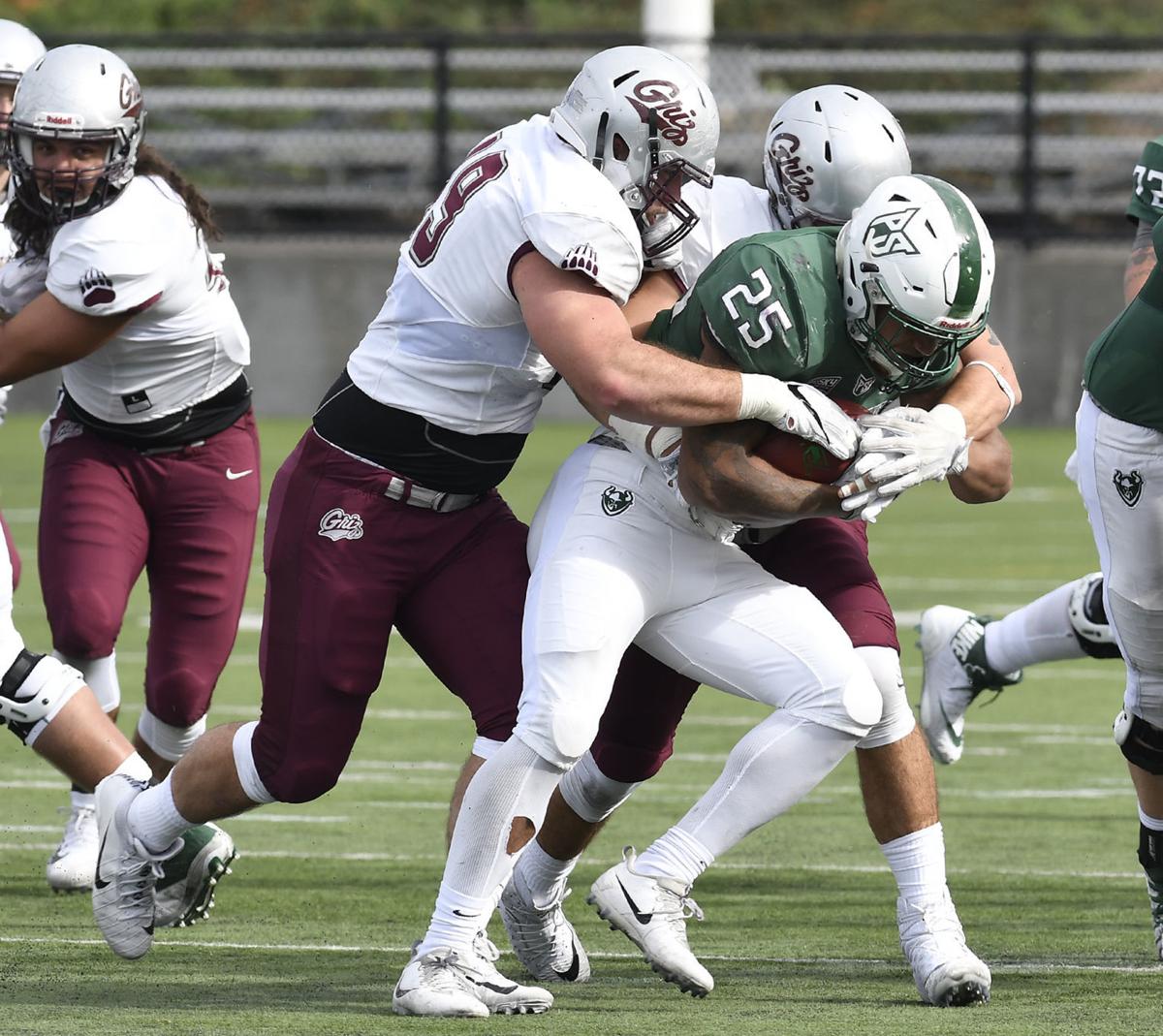 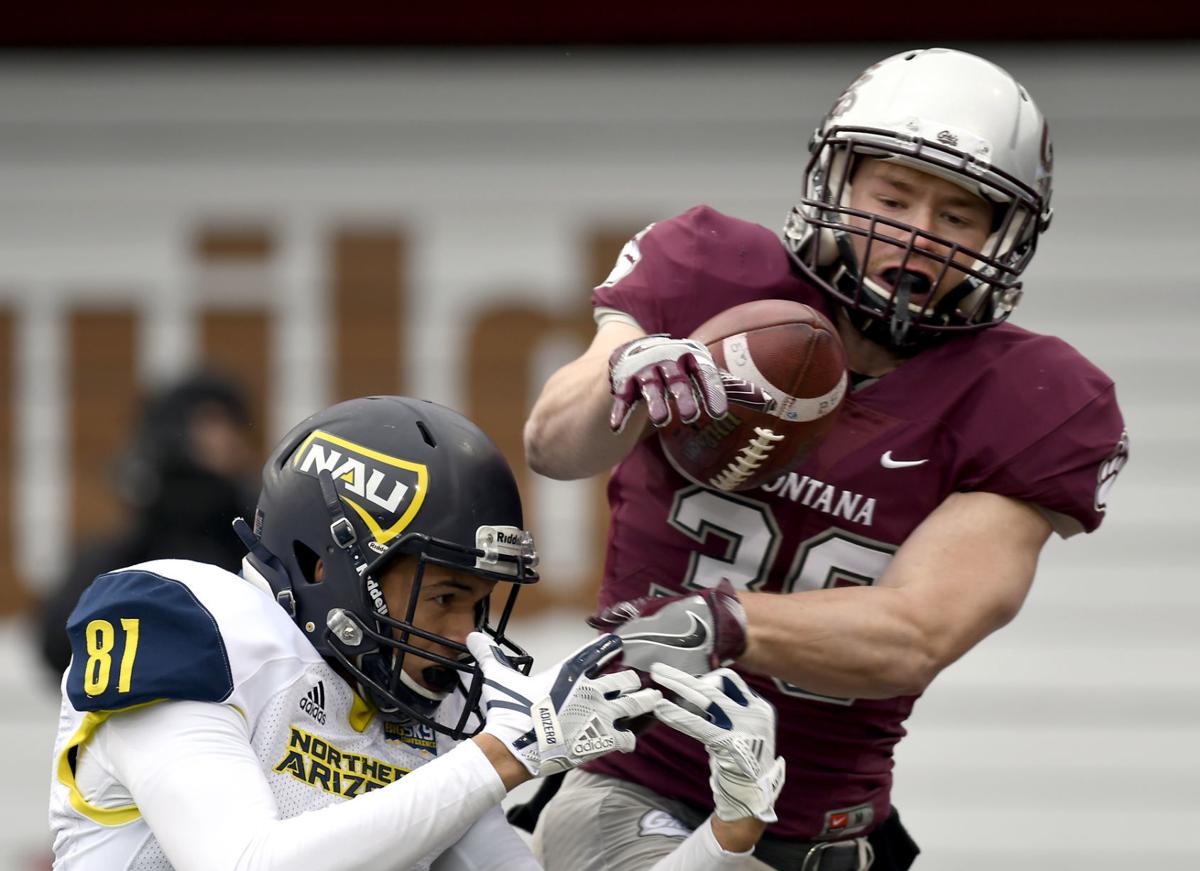 Montana safety Evan Epperly of Kalispell breaks up a pass to Northern Arizona's Justis Stokes in 2017.

Montana safety Josh Sandry, left, intercepts a North Dakota pass in 2017. The Bigfork native returned the ball 74 yards. Sandry is one of 42 players from Montana on the Griz roster.

Montana safety Evan Epperly of Kalispell breaks up a pass to Northern Arizona's Justis Stokes in 2017.

MISSOULA — The sentiments from in-state high school football players when they commit to the University of Montana are always similar.

"I've always wanted to go play football for the Griz. If you're from Montana, Grizzly Stadium is the place to be," Conor Quick of Helena said in August 2017.

"It's always been my dream ever since I was a little kid to play for the Griz," Gabe Sulser of Billings said back in July 2017.

"Growing up here and going to every single game, I've fallen in love with the place and I knew from the start I always wanted to be a Grizzly," David Koppang of Missoula said in September 2017.

"I've been a Griz fan since before I could walk," Nathaniel Ferguson of Butte said in January 2018.

There are currently 42 Montana football players who call the Treasure State home.

Those 42 mark the highest number of Montanans on the roster since 2007 — when Hauck coached current UM safeties coach Shann Schillinger as a sophomore and Grizzly legend Chase Reynolds as a redshirt freshman.

The current Treasure State Grizzlies hail from 17 different places, representing far flung corners of the state and everywhere in between.

"Montana kids love this program," Epperly said recently. "They'll do anything for this program.

"The University of Montana football program means a lot to me. Most every Montana kid grows up cheering for the Griz, watching the Griz. It means a lot to put on the silver and maroon every day. I certainly don't take it for granted."

"Every Saturday I looked forward to the Griz game more than anything," Sulser said in June. "Just thinking about the days back when Coach Hauck had things rolling got me pretty excited to some day hopefully be there and now I'm happy it's finally coming true."

Two players are from Great Falls — freshmen Jake Olson and Gerritt Bloemendaal. And two more are from Polson — Tanner Wilson and Matt Rensvold.

The other 11 are lone rangers, representing their hometowns by themselves.

Josh Sandry is from Bigfork. Trase Le Texier is out of Boulder. Ferguson is the first Butte Grizzly on the roster since 2015. Garrett Graves is from Eureka. Jace Lewis grew up in Townsend. Cole Sain was born in Hamilton and grew up in Darby. Colten Curry is from Valier, and Jed Nagler hails from Whitefish.

Shayne Cochran calls Culbertson home, and Michael McGinnis is from Sidney. The two of them share the longest drive from their stomping grounds to Missoula — treks of about 540 miles.

And, last, but not least, No. 37 Jesse Sims is from Stevensville and graduated from Corvallis High School.

The reaches of Montana's football program stretch far beyond the Treasure State's borders, but the greatest impact is felt at home.

The tradition of in-state players carrying the Grizzlies to victory is as old as the program itself.

The United States Census recognizes 129 cities and towns in the state of Montana. Grizzly football lettermen call 76 of those places home — representing 59 percent of municipalities in the state. The largest city that doesn't have a Grizzly letterman representing it is Belgrade, with a 2010 population of 7,389.

And then there are several Grizzly lettermen from smallest Montana localities, like Frank Benson of White Pine — a community nestled in between Noxon and Thompson Falls on Highway 200. And Oral Berry, who lettered for UM in 1906-07, lived in Granite in the early 1900s before it was ghost town.

National Signing Day 2018 featured 11 more players in addition to the players that inked their National Letters of Intent during the inaugural Early Signing Period in December 2017.

"We are going to take every Montana kid that we can get that we think can help us win a championship," Hauck said on National Signing Day. "And then we'll go elsewhere."

He doubled down on that approach this summer.

"In terms of recruiting, Montana's home base. That's where we start," Hauck said on Aug. 23. "We'll look at every kid in the state that has a chance and if we think they can compete at a championship level and help us win a championship, we're going to recruit them."

Hauck isn't the only one going after in-state players. Montana State has built its brand on Treasure State natives too.

"We're going to see more intense in-state recruiting battles because I know he values Montana kids and we'll go toe-to-toe on the best and the brightest in the state," Montana State football coach Jeff Choate said of Hauck in July at the Big Sky Football Kickoff.

"... I think it's hard to make a rivalry as good as the Montana State-Montana game any better, but I do think the emphasis he places on that game and winning the in-state recruiting battles and knowing how important that game is and winning those battles will make a great game even better."

The battle has already begun.

Bozeman tight end Ryan Lonergan — one of the Treasure State's top prep football players this season — was offered by the Grizzlies just days before he committed to Montana State.

Loyola Sacred Heart's Ryan Tirrell committed to Montana back in April, but said he was in close contact with the Montana State coaching staff before pledging to play for his uncle Hauck.

Montana State was also involved in the recruitment of Fairfield's Ryder Meyer before he was the first to commit to Montana back in April for the 2019 class.

The Edge — Assessing how the No. 24 Montana Grizzlies, No. 13 Northern Iowa Panthers stack up

Editor's Note: This story has been updated to reflect Montana and Northern Iowa's depth charts, which had not been released at the time of thi…