MISSOULA — One of the biggest concerns surrounding Bobby Hauck's return as coach of the University of Montana football team dealt with players' off-the-field actions.

Those concerns have been cemented into Hauck's contract, which the Missoulian obtained via a public records request.

"Coach Hauck and I have had lengthy discussions around player achievement, particularly off the field," incoming university president Seth Bodnar said in an emailed statement on Friday. "We expect our athletes to embody the vision and values of the University of Montana and to conduct themselves accordingly.

"New language in the coaching contract places an emphasis on academic excellence (in) addition to the expectations for the football program. I know that Coach Hauck and I are aligned in these expectations.”

In addition to the new language, the contract outlines incentives beyond his base salary of $185,000 that — if Hauck achieves every one — would net him a total of $323,000, around $10,000 more than incoming president Bodnar's salary. Several of those incentives are for double the rate former coach Bob Stitt received.

In section three, "Duties," this subsection is new:

"The University and Coach will work to create an atmosphere where assistant coaches and student athletes understand and embrace the following:

In section four, "Conduct of the UM football program," the second subsection is also new.

That subsection outlines that Hauck, all his assistant coaches, everyone who directly reports to him and football student-athletes must "foster a culture of collaboration within the department, across campus, and within the community."

The first four of the 17 incentives in Hauck's contract relate to academic success, just as in Stitt's. But the dollar amounts corresponding to those academic incentives are quite different.

"We came to the conclusion to place more emphasis on the academic performance of our football student athletes," Haslam said at Friday's news conference introducing Hauck as the new coach.

"President Bodnar is a former Division I student-athlete. This is very important to him.

"We will continue to reward coaches for athletic performance. That's important. But we have re-weighted the reward for academic performance and increased the importance of those goals for the coaches." 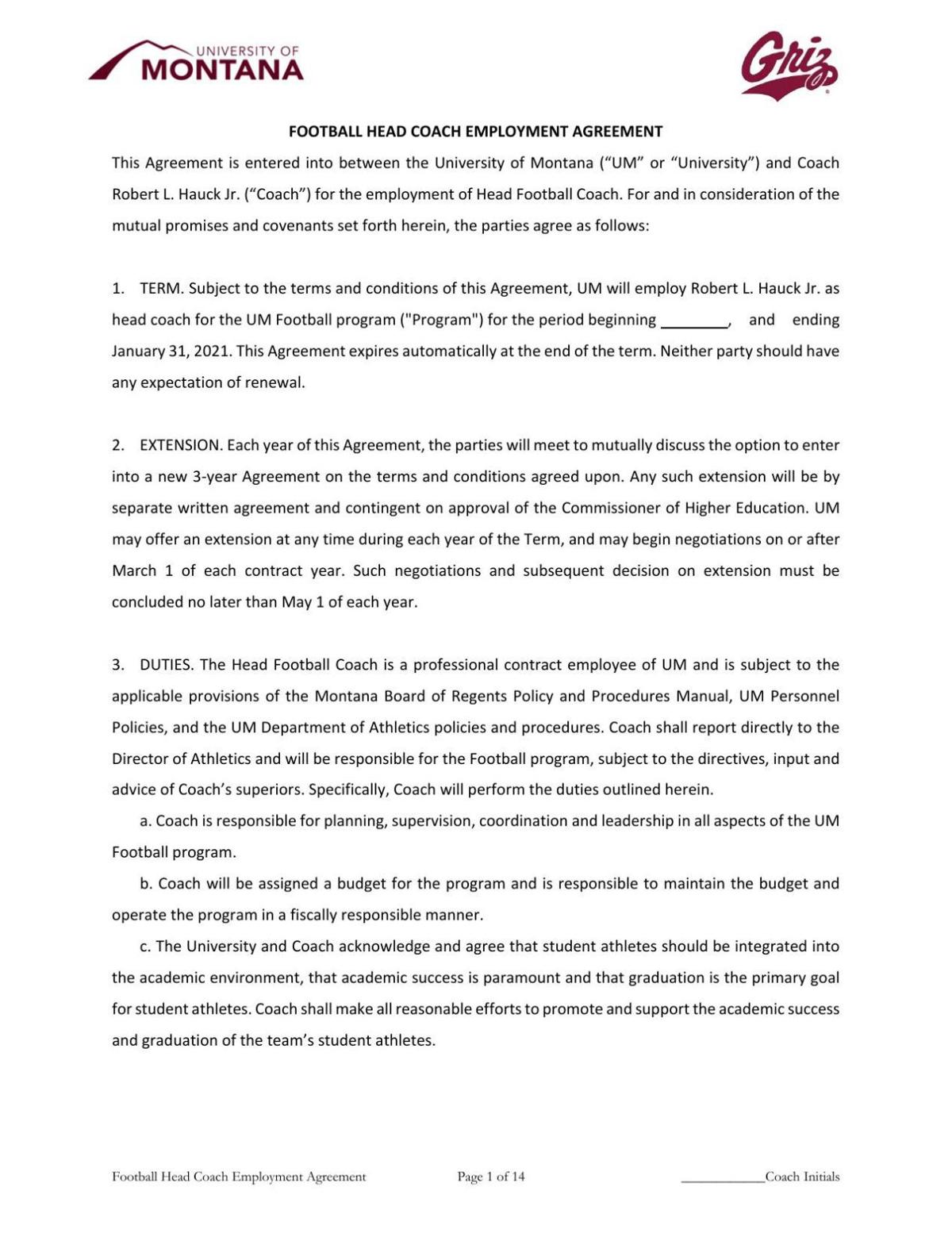 Assistant coaches also receive bonuses for GPA under Hauck's contract. Those incentives were not in place under Stitt. Assistant coaches receive a bonus of $500, $1,000 or $2,000 depending on team GPA.

Nope. Not talking about credit cards or loans here. When it comes to the NCAA, the APR refers to Academic Progress Rate.

The APR score is a number that's calculated by looking at two criteria.

From the NCAA: Every student-athlete on an athletic-based scholarship earns one point for staying in school and another point for being academically eligible. A team's total points are divided by the total possible number of points and multiplied to by 1,000.

To be eligible for postseason play and to avoid incurring other penalties, teams must have a 930 four-year average or a 940 two-year average.

If Montana has a 950 or above, Hauck receives $7,500 in incentive pay, while his assistants receive $1,000 each. Stitt's incentive for the same APR score was $2,500 with no assistant compensation.

The NCAA calculates graduation success for its student-athletes as well. It's similar to the federal graduation rate calculated by the government, but it's slightly different. The NCAA's GSR accounts for transfer students, while the federal statistic doesn't. Both rates track over six years.

Hauck's incentive for maintaining a GSR that's equal to or higher than the national FCS average is $7,500. Assistants receive $1,000 each. Stitt's incentive for the same GSR criterion was $5,000 with no assistant compensation.

Remember the ever-confusing APR? Back to that.

When calculating the team's APR score, every student-athlete on scholarship can give a potential two points to the team. This incentive looks at those scholarship athletes and sees if they have at least one of those two possible points.

There were other changes from Stitt's incentives to Hauck's incentives beyond those based on academic performance.

Stitt received $15,000 for "attend(ing) all reasonably requested UM Athletics and GSA Functions." Hauck is set to receive $20,000 for meeting that criteria.

The rest of the incentives remained the same, except for adding $1,000 of assistant compensation in the event that Montana defeats a non-conference team that advanced to the FCS playoffs within the last two years.

Amie Just covers Griz football for the Missoulian, among other things. Follow her on Twitter @Amie_Just or email her at Amie.Just@406mtsports.com.

MISSOULA — Nick Puckett felt like a deer in the headlights.