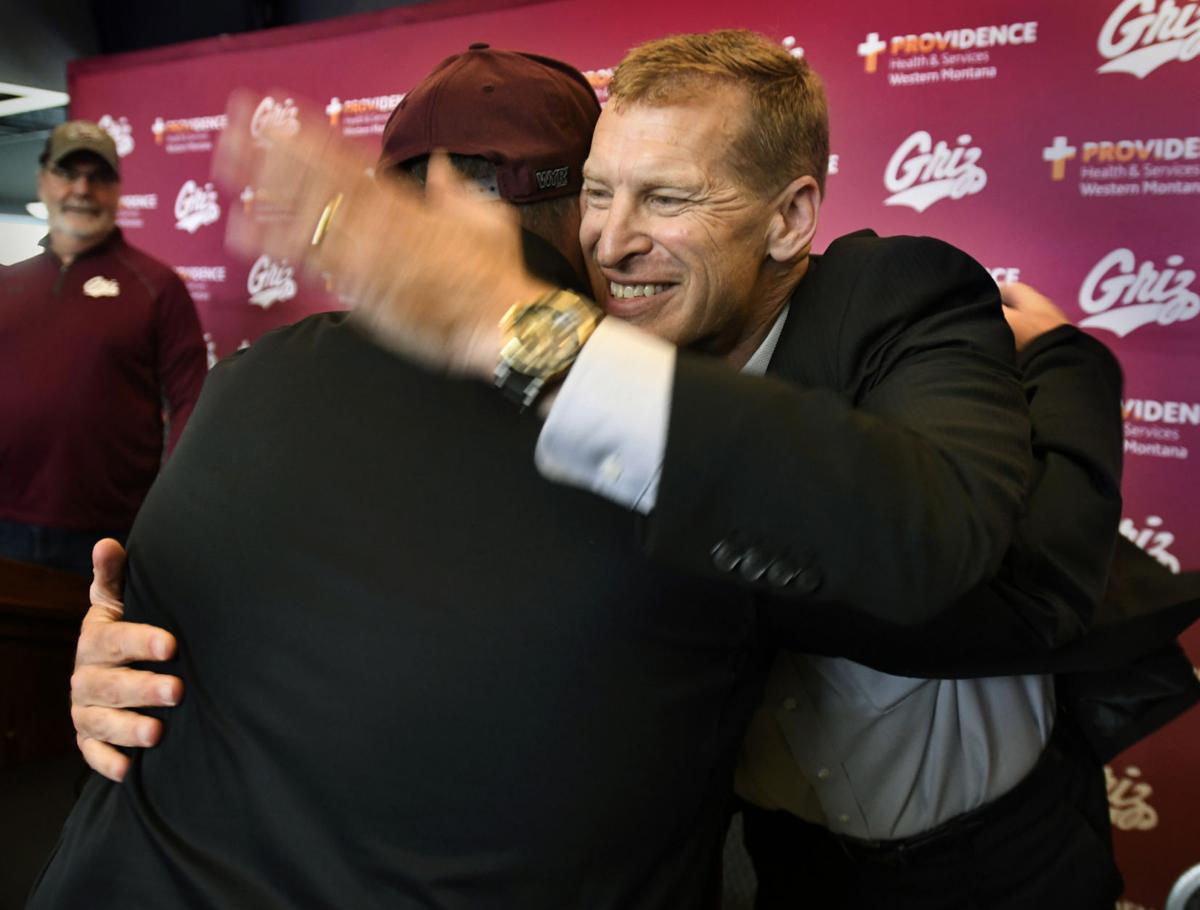 Bobby Hauck hugs a supporter Friday morning before the start of a press conference formally announcing the Missoula native as the head coach of the Montana Grizzlies football team for the second time. Hauck led the Griz from 2003-09, compiling a record of 80-17 and taking the team to the FCS National Championship three times. 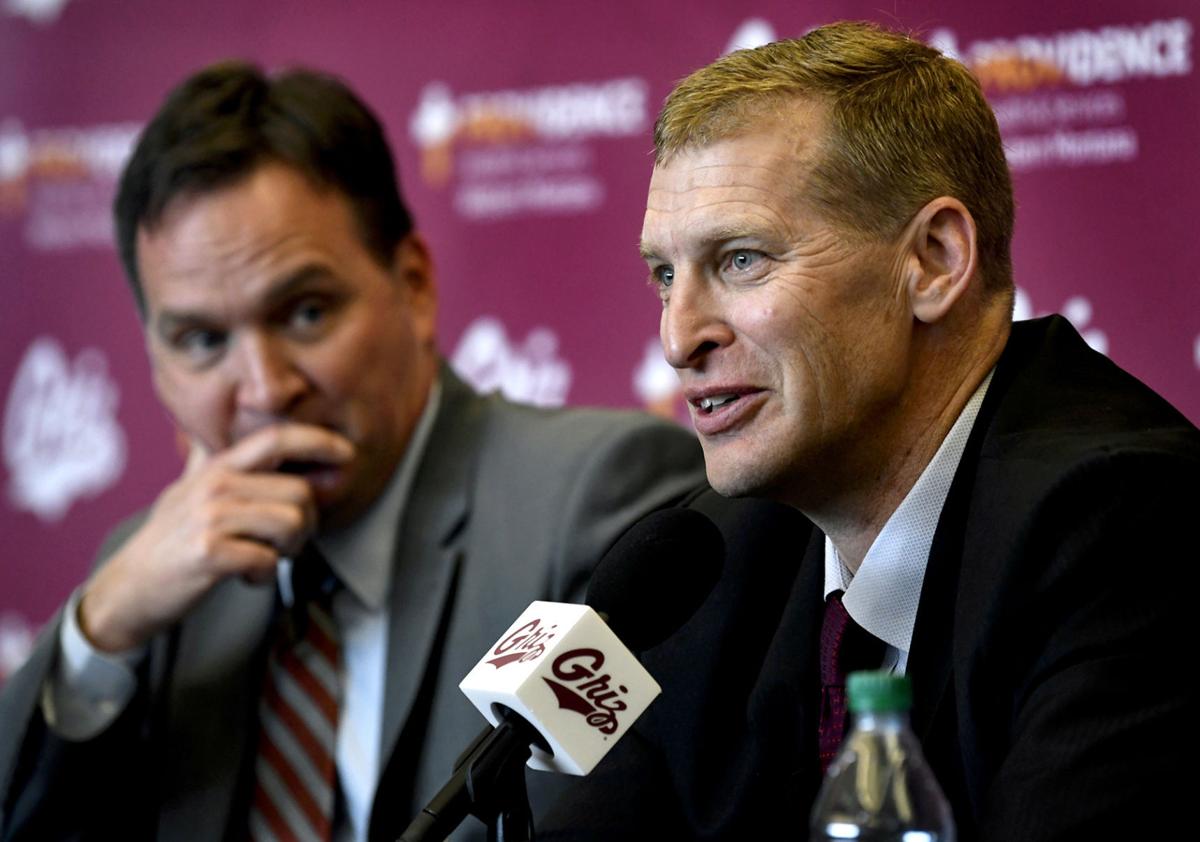 Hauck, a controversial choice for the position, addresses a question from the media Friday morning while Montana athletic director Kent Haslam looks on. 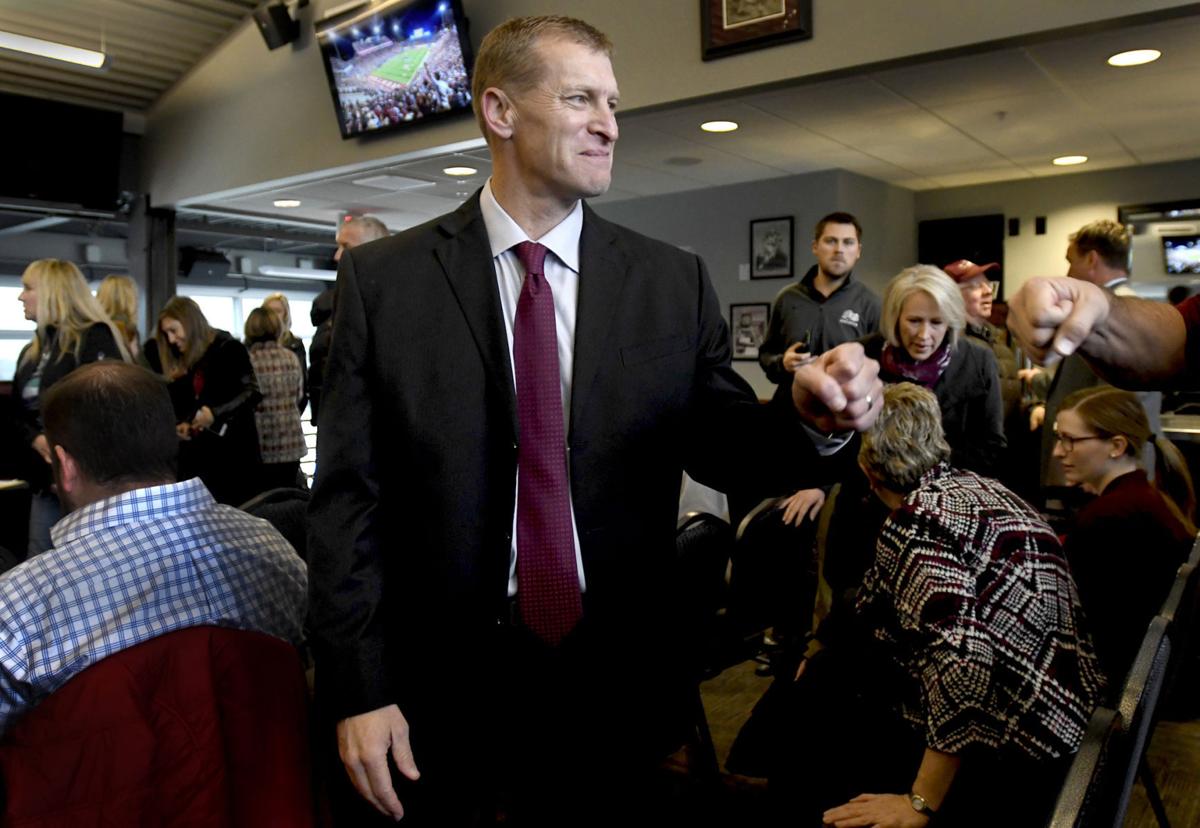 Hauck gestures to the crowd of family members and supporters who filled the Canyon Club in Washington-Grizzly Stadium for the announcement. 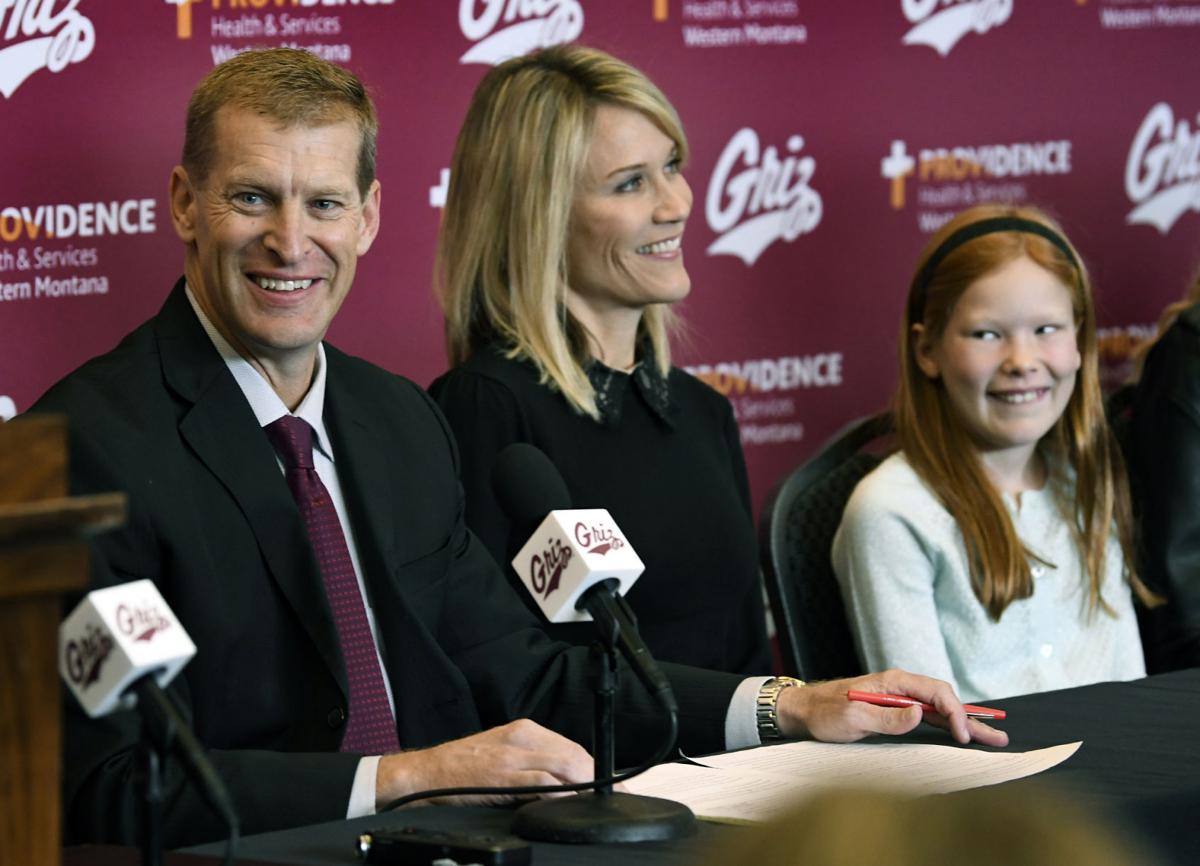 Hauck sits with his wife, Stacy, and his youngest daughter, Elise, during his reintroduction to the media and supporters at the press conference. 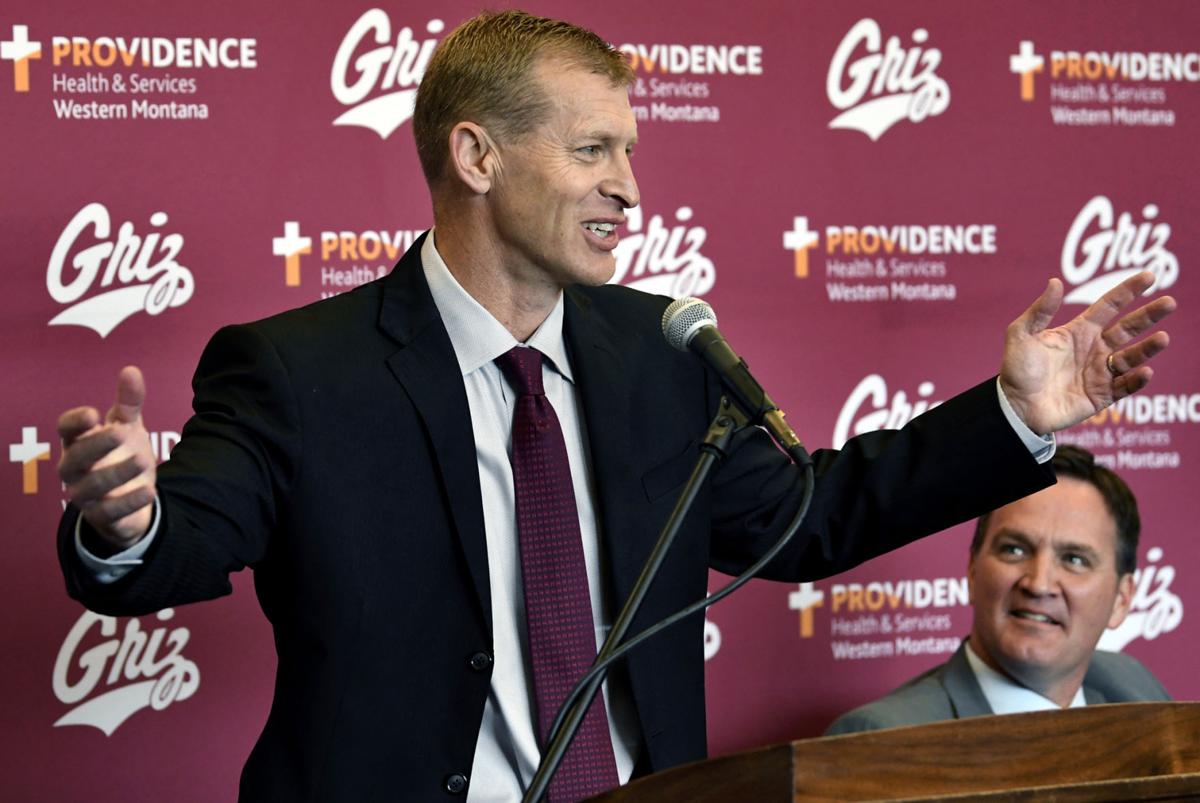 Bobby Hauck addresses the crowd at his inaugural press conference after being named Montana football's next head coach."My expectation for us is to win championships here," he said. "We're going to do that." 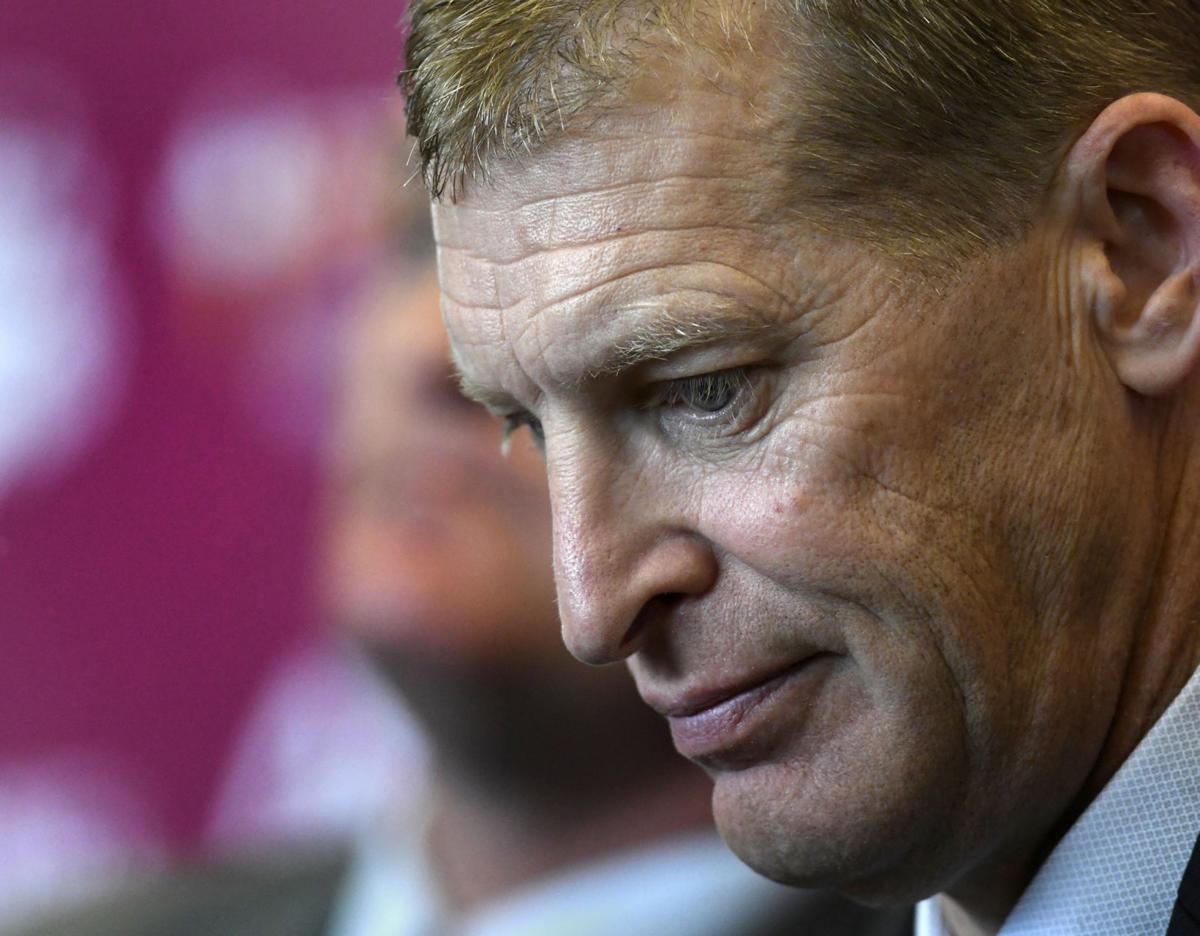 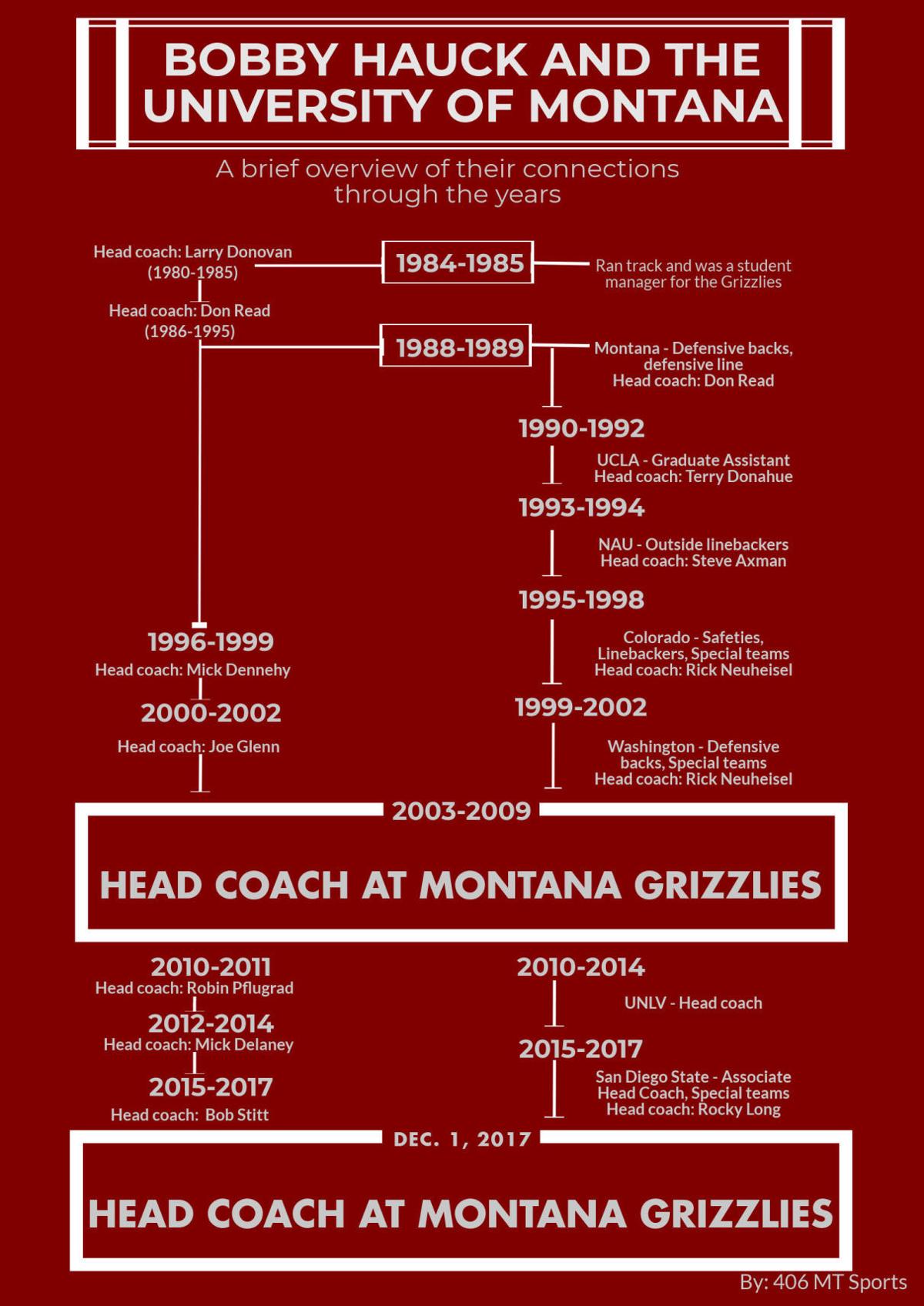 Bobby Hauck's coaching career has been intertwined with the University of Montana.

Hauck, a controversial choice for the position, addresses a question from the media Friday morning while Montana athletic director Kent Haslam looks on.

Hauck sits with his wife, Stacy, and his youngest daughter, Elise, during his reintroduction to the media and supporters at the press conference.

Bobby Hauck addresses the crowd at his inaugural press conference after being named Montana football's next head coach."My expectation for us is to win championships here," he said. "We're going to do that."

MISSOULA — Bobby Hauck unleashed the charm before his introductory press conference even began on Friday morning.

Armed with a charismatic smile and hearty handshake, the University of Montana's next football coach took time to chat with nearly everyone in the packed Canyon Club room atop Washington-Grizzly Stadium.

"Probably 90 percent of my best friends in the world are in town," Hauck, a Big Timber product, said in his opening statement, before rattling off names of a dozen family members who were either present or listening in.

"This place is a special place for the Hauck family," he added. "... Generations have come through this place. I'm a third-generation alum. Some of my progeny are going to be fourth generation and hopefully we go beyond that."

Hauck, 53, interviewed for the vacant head coach position on Monday, where he spent all day in off-campus meetings with President Sheila Stearns, incoming President Seth Bodnar (via Skype), Athletic Director Kent Haslam, and other people inside and outside of the athletic department.

Haslam said he interviewed four candidates for the job and offered Hauck the position on Thursday morning. Hauck returned the signed contract to Haslam on Friday morning.

The contract is a three-year deal with a base salary of $185,000 per year. Incentives and other specifications of the contract are not yet available, but after discussions with Bodnar and interim President Sheila Stearns, greater weight was given to rewarding the coach for his players' academic achievements.

"We came to the conclusion to place more emphasis on the academic performance of our football student athletes," Haslam said. "... We will continue to reward coaches for athletic performance. That's important. But we have re-weighted the reward for academic performance and increased the importance of those goals for the coaches."

Hauck said that academic performance is important to him, as well, mentioning the 104 academic All-Big Sky student athletes he had on his rosters last time he was here.

Haslam also said in a one-on-one interview that if Hauck leaves before his contract is up, whoever initiates the departure would pay the remaining base salary to the other party.

Hauck said he will hit the ground running for Montana ahead of the early signing period, which starts Dec. 20. But he will not formally leave San Diego State until he coaches one more game.

The Aztecs are bowl eligible with a 10-2 record. It has not yet been decided in which bowl game they will play.

"I have a commitment to coach an SDSU bowl game, which will not detract me from the recruiting process, I assure you," Hauck said.

Hauck later added in the interview that he's been in this situation before.

"The last time I came here I was at Washington before, coached the Sun Bowl game and recruited for Montana at the same time," Hauck said. "It's absolutely doable. It's going to be a lot of work and we gotta knuckle down and get it done."

Due to NCAA violations in 2011, the last time UM officially won the Big Sky Conference title was in 2009 — Hauck's last season with the Grizzlies.

Hauck is the second Montana coach to have multiple head coaching stints with the Griz. Doug Fessenden led the Griz from 1935-41 and again from 1946-48. Due to the breaks in their tenures, Hauck is the 38th hire as UM head football coach and the 36th man to hold the position, though, Montana Athletics regards Hauck as the 37th head coach in school history.

"Griz Nation, here we go," Hauck said to end his opening statement. "Together we're going to return to dominance here. Go Griz. Let's get after this thing."

Hauck went 31-1 in league games from 2006-09. The lone conference loss came in 2008 to Weber State, which Montana avenged in the playoffs two months later.

While there was a stellar product on the field, Hauck's previous tenure at Montana was muddied with multiple off-the-field incidents involving players.

Those incidents involved allegations ranging from drunken driving, domestic violence, a drug-related robbery and assault. After Hauck's departure, one of his recruits — Beau Donaldson — was charged with rape. Donaldson pleaded guilty and was sentenced to 30 years in prison with 20 of those suspended.

"We talked about what mistakes were made'' with past player transgressions during Hauck's interview, Haslam said. "How did we get there? We talked about player conduct, the process for evaluations, where were mistakes made? How did those things happen? How are we going to handle those things moving forward?

Hauck added: "As a leader of the Griz football team, I'm going to lead as a positive example for this community and hopefully across this country. People pay attention that we're the gold standard for all of that."

Hauck was born in Missoula, went to high school in Big Timber and graduated from UM in 1988 with degrees in business and physical education. He didn't play football while he was at UM, but participated in track and field.

After leaving Montana, Hauck was the head coach at the University of Nevada-Las Vegas from 2010-14. In 2013, he led the Rebels to their first winning season since 2000 and to their fourth-ever bowl game. He finished his five-year stint there with a 15-49 record before resigning.

He's been at San Diego State since 2015, where he's coached the Aztecs' special teams unit. In 2016, he retained that title and was promoted to Associate Head Coach.

According to USA Today's database of FBS assistant coaches' salaries, Hauck made just over $209,000 in 2016. Hauck said he believes he has one year left on his contract with the Aztecs, but there's no buyout attached.

"I'm just so proud of what we accomplished at both those places, though sometimes it's not always quantified on the scoreboard," Hauck said. "I come back here as a better coach than when I left.

"If I can hold up my end of the bargain, I think we're gonna get the job done. That experience the last seven, eight years, has been invaluable to me in terms of what I can bring back home."

Hauck inherits the program after Bob Stitt led the Grizzlies for three seasons.

Under his leadership, Montana failed to make the playoffs in 2016 and 2017, marking the first time the Grizzlies went without postseason appearances in back-to-back seasons since 1991-92.

He served as a graduate assistant at UCLA from 1990-91 and earned his master's degree in education administration in 1991. He transitioned into the assistant recruiting coordinator role for the 1992 season.

He coached outside linebackers at Northern Arizona and served as recruiting coordinator from 1993-94. At Colorado, Hauck was in charge of the safeties and special teams units from 1995-97, and was in charge of recruiting coordinator duties. In 1998, still at Colorado, Hauck coached outside linebackers and special teams.

Hauck was at Washington before coming to Montana as its head coach the first time. From 1999-01, Hauck coached safeties and special teams at UW. In 2002, he led the defensive backs there.

Amie Just covers Griz football for the Missoulian, among other things. Follow her on Twitter @Amie_Just or email her at Amie.Just@406mtsports.com.

~=Bobby Hauck is entering his second coaching stint at UM.

MISSOULA — Near as I can tell, there are no college courses on how to be a Big Sky Conference athletic director.

The day after posting her petition telling the University of Montana not to hire Bobby Hauck, when it had gathered around 200 signatures, Lisa…