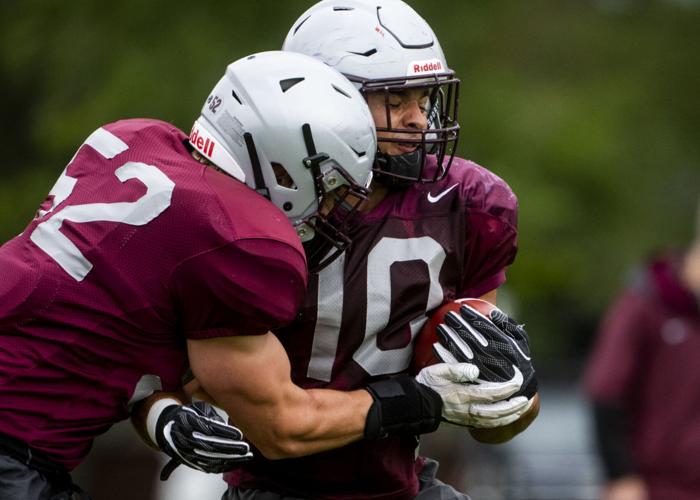 Montana linebacker Marcus Welnel runs drills during preseason football camp Wednesday at Dornblaser Field. Welnel is one of 11 Montana natives in the Grizzlies' linebacker position group and could be in line to start this season. 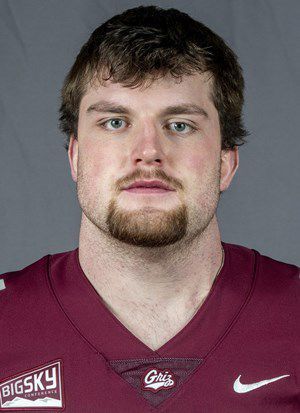 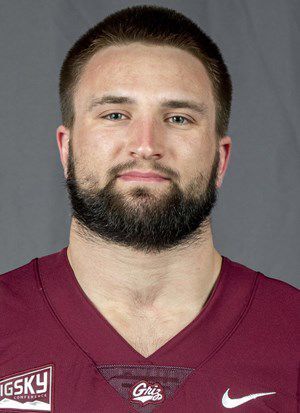 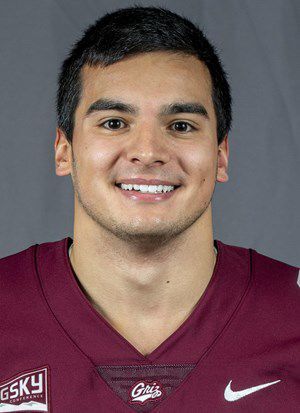 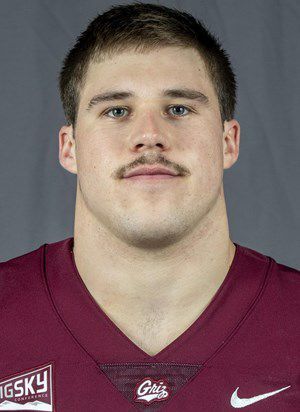 MISSOULA — Something dawned on Jace Lewis and the rest of Montana’s linebackers prior to Thursday’s practice: almost everyone in their position group was from the state of Montana.

“That’s what we were talking about today,” the Townsend native said. “We were saying there’s only two out-of-staters in the linebacker room. I feel like everybody in there just has that blue-collar work ethic and just puts their heads down and grinds.”

It’s not just that 11 of their 13 linebackers are from Montana, but their entire starting linebacking corps looks like it’ll be Montanans this season, which no other offensive or defensive position group can say. The first guys off the bench after that might also be from the Treasure State.

It’s a treasure for the Griz to have a player like Lewis, an All-American, heading the linebacking corps. He’s joined by senior Patrick O’Connell of Kalispell, who appears poised to start again this year. Marcus Welnel of Helena started both games in the spring, but Braxton Hill of Anaconda, who’s finally healthy, has been competing with him to earn a shot at starting.

Then there are Missoula natives Levi Janacaro and Tyler Flink, who are working toward earning playing time. Also upping his game is junior Mike Matthews of Camas, Washington, who Griz coach Bobby Hauck dubbed a “quasi-Montanan” because he’s a fishing guy.

“It’s mostly in-state guys now, which is cool to see,” Lewis said. “Playing with Pat, Marcus, Braxton, Flink and all those guys coming up is just cool. I think it’s a coincidence, but it’s a cool coincidence.”

But it has been dominant as a group over the years. Stats Perform even named Montana “Linebacker U” for the 2010 decade.

Former Griz linebackers Caleb McSurdy, Jordan Tripp of Missoula and Brock Coyle of Bozeman went on to play in the NFL since 2010. Josh Buss was an All-American later in the decade, and Dante Olson won the Buck Buchanan Award for the best defensive player in the FCS in 2019.

“Seeing older guys’ successes really fires up the younger guys and keeps everyone coming,” Hill said. “We’re all so tight and have a lot of the similar goals. It’s easy when guys around you want the same thing. I just think we have a lot of similar mindsets when it comes to hard work, which is awesome. It really motivates individually, and it motivates the whole group to keep going.”

Lewis credits the continued success to older players taking younger players under their wing when they arrive on campus as freshmen. For him, it was Tucker Schye, Connor Strahm and Buss. He even still has his Twitter bio as “THE Josh Buss’ backup.”

“You just pick up on things that each guy does well and put that into your own craft and carry it along to the younger guys,” he said.

Lewis is now the elder statesman of the group and is helping along younger guys like freshmen Ryan Tirrell of Missoula, Geno Leonard of Missoula, Soren Syvrudof Missoula, Carson Rostad of Hamilton, Asher Croy of Bozeman and Chase Johansen of Utah. The linebackers also hang out outside of football, making practice more fun and fortifying their bonds for when things get tough on the field, they say.

“I think the most exciting thing for the group is just our relentless effort and dedication to getting better and to making each other better,” O’Connell said. “The group that we’ve got really excites me because all the things that we do, we do together. We never leave anyone behind. I think it’s going to be a great year with a great group of guys.”

It’s rare for Montana’s current in-state linebackers to have come in on full-ride scholarships, but they have a desire to strive toward playing time, which in turn can lead to increased scholarships.

Lewis was a walk-on who earned a scholarship and the No. 37 legacy jersey thanks to his consistent improvement. Hill walked on after a torn labrum, broke his wrist at UM and later broke his collarbone but has persevered to earn a full-ride scholarship.

“That meant everything,” Hill said. “I just want to represent this team and my hometown well.”

O’Connell walked on in 2018 under Hauck after he went to Division II University of Mary because former Griz coach Bob Stitt didn’t recruit him. He earned a spot on the team, was named the scout team defensive player of the year while redshirting, gained a scholarship and won starting time.

“The Montana boys are always tough and physical and hard-nosed,” he said. “So, I think the coaches know what they’re getting when they recruit us.”

Welnel only had offers from NAIA schools in the state before he had the chance to join UM, his dream school.

“Montana guys are just tough guys that know how to work hard,” he said. “We don’t get looked at by a lot of other schools. We grew up loving this place, we all did. So, we have a lot of passion for the university here, so we all go really hard.”

Hauck and his staff prioritize the state of Montana when recruiting, and not just for linebackers. They look for players who have good running ability, change of direction and tackling when seeking out linebackers.

Hauck feels a player’s speed can translate quickest to the college game, but they still need to adapt to the speed of the game, hit the weight room and learn the playbook. On the field, they first need to learn their role in the defense, then understand how they fit into the whole defensive scheme and then comprehend how offenses are trying to attack them.

Then it comes down to being able to defend the run and pass while navigating space.

It’s one thing to recruit players who have potential and a desire to work hard, but it takes good coaching on top of that.

Defensive coordinator and linebackers coach Kent Baer has been building the linebacking group since Hauck hired him in 2018. He certainly has experience now in his 49th season of coaching, having played linebacker at Utah State and coached at Notre Dame, Stanford and Arizona State, among other stops.

“He’s got great experience, so he’s seen a lot of different players over the years, and he’s got a good sense for how to develop different guys,” Hauck said. “Everyone’s different, and he does a real nice job bringing each guy along in terms of what’s best for him.”

O’Connell raved about Baer’s knowledge of the X’s and O’s and ability to teach the mental side of the game.

“I think a lot of our success has to do with coach Baer and how he coaches us,” O’Connell said. “They know what they’re recruiting, so they get what they want with a lot of toughness not only physically but mentally. The way that him and coach Hauck coach us, they prepare us for any situation so that we’re ready.”

Lewis has found his time in the film room with Baer especially helpful.

“We hit the meeting rooms, watch film, he’s telling us what we did wrong, where we can do better,” he said. “He’s pushes us to be great. He sees something in each and every one of us.”

What Baer asks of his players is what Hill craves.

“He coaches us hard,” Hill said. “He preaches physicality and toughness and work ethic and all the things that us Montana boys harp on and the things that mean a lot to us and our pride.”

For Welnel, the key is to pay attention to Baer’s words.

“He’ll get on you, that’s for sure,” Welnel said. “He’s an old-school, hard-nosed coach. If you can just listen to him, you’ll be a good linebacker.”

While there’s excitement about Montana’s homegrown linebacker group, it's all hype until they prove it on the field.

What Hauck wants to see out of the linebackers this year is simple on paper.

Montana’s defense under Hauck is seemingly designed for linebackers to rack up stats. Olson had 179 tackles in 2019 and 151 in 2018, and Lewis had 131 in 2019; those are the top three single-season tackle records in UM history.

O’Connell’s 6.5 sacks in 2019 were the most by a Griz linebacker in the 2010 decade. They were tied for the sixth most by any Griz player that decade, with the others all ebing defensive ends.

Montana’s 3-3-5 defense, with three defensive linemen and three linebackers, is a unique scheme. It takes time to learn but is fun for Welnel to play in after he came from a 4-3 defense in high school.

“It’s pretty overwhelming to learn all we have to do,” he said. “Once you get it down, I enjoy it a lot because offenses, it’s hard for them to see exactly what we’re doing because they don’t see it week to week.”

The past year allowed the Griz to continue their development at linebacker, just like at every position. Even Lewis, with all his time in the system, still found it helpful to improve areas of the playbook where he was struggling and eliminate bad habits.

Hauck feels they now have enough depth to go at least two deep at each of the three linebacker spots — and those might all be Montana natives.