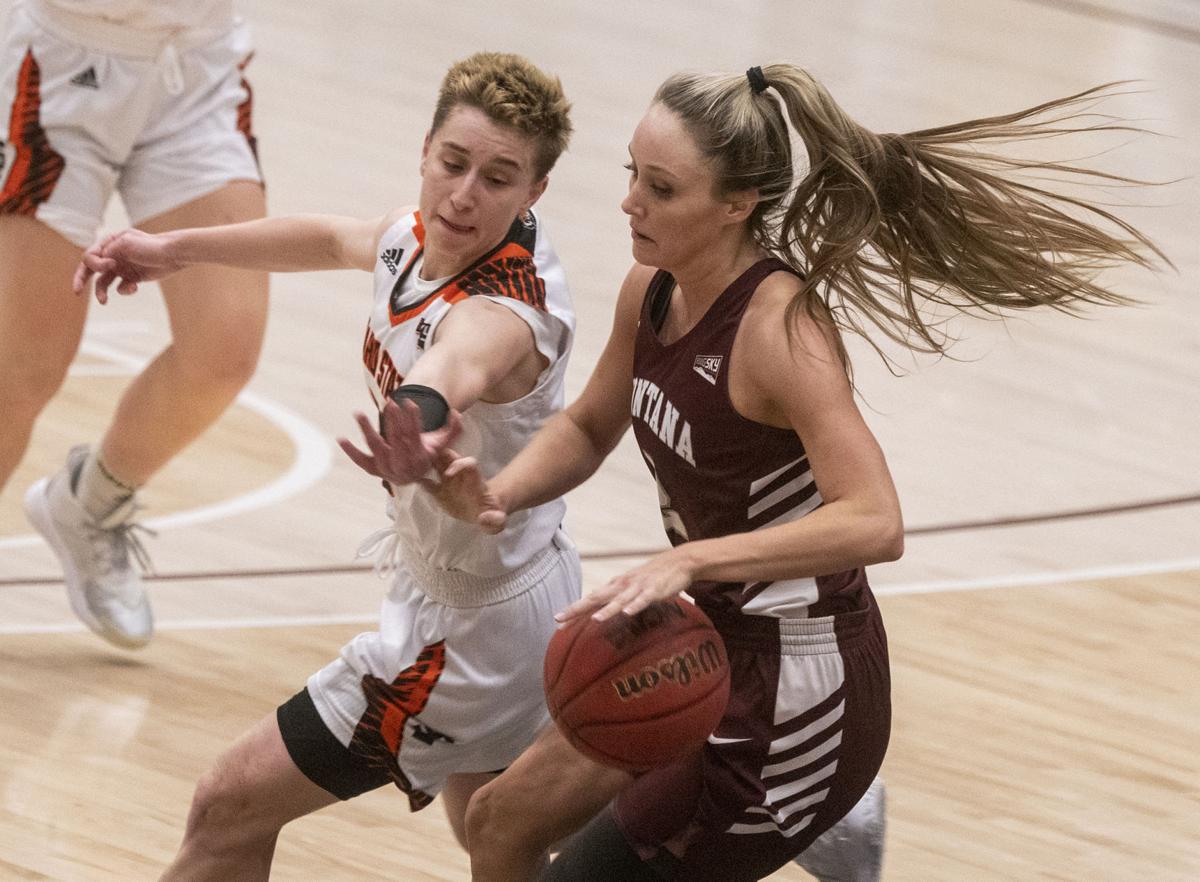 Idaho State’s Dora Goles (left) reaches for the steal against Montana’s Sophia Stiles during Saturday's game at Dahlberg Arena in Missoula. The Bengals defeated the Lady Griz, 72-56, to complete the series sweep. 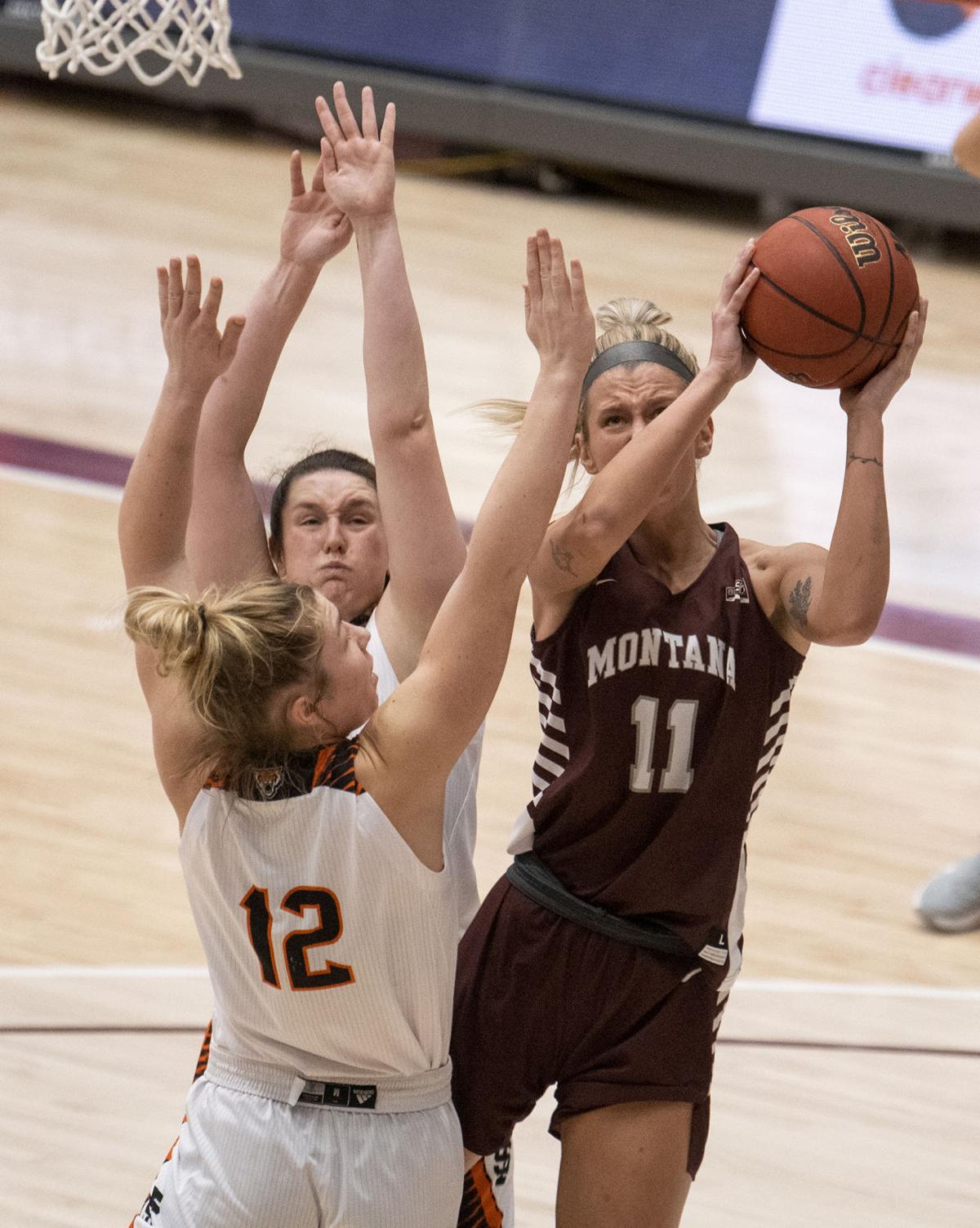 Montana’s Abby Anderson (11) rises up for a shot against Idaho State’s Callie Bourne (12) and Delaney Moore (22) during their women’s basketball game Saturday at Dahlberg Arena in Missoula. Anderson scored 18 points. 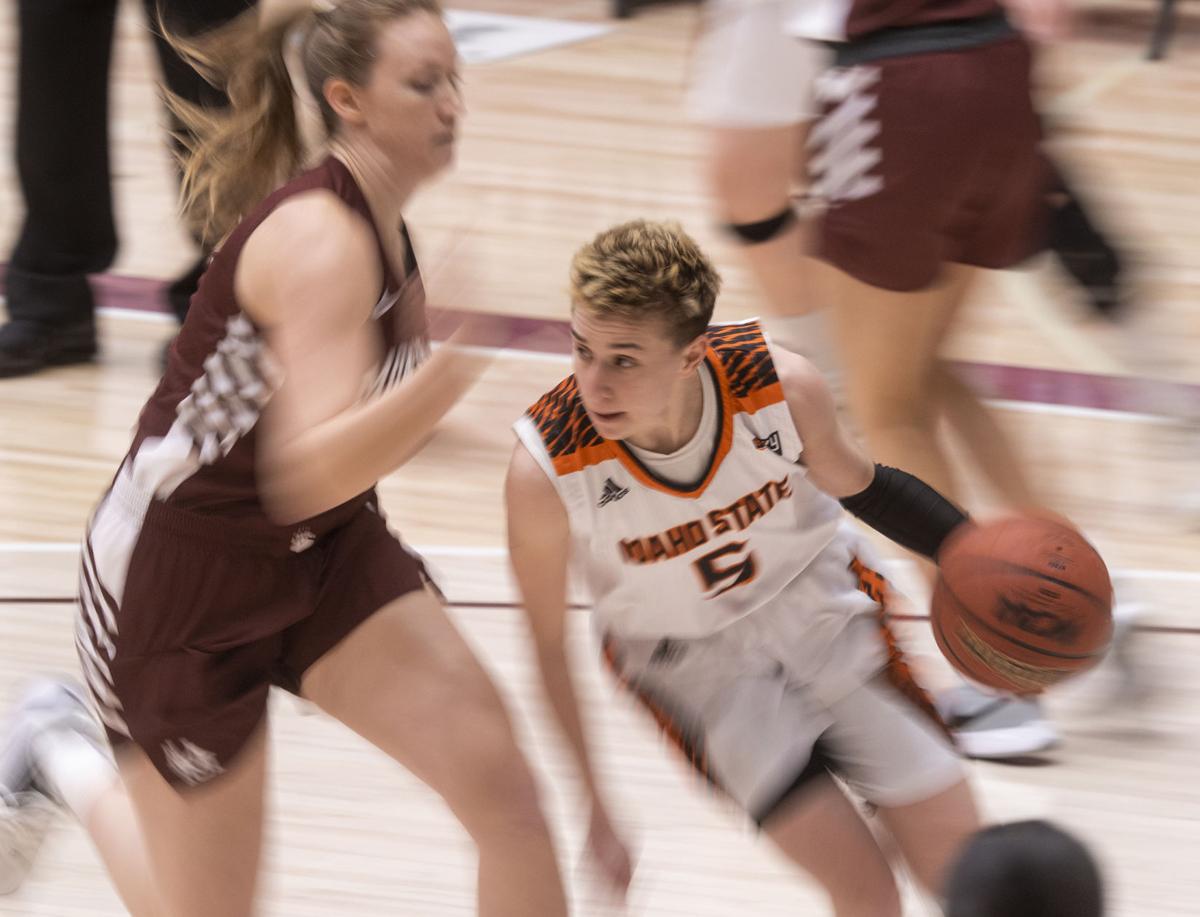 Idaho State’s Dora Goles (left) reaches for the steal against Montana’s Sophia Stiles during Saturday's game at Dahlberg Arena in Missoula. The Bengals defeated the Lady Griz, 72-56, to complete the series sweep.

Montana’s Abby Anderson (11) rises up for a shot against Idaho State’s Callie Bourne (12) and Delaney Moore (22) during their women’s basketball game Saturday at Dahlberg Arena in Missoula. Anderson scored 18 points.

MISSOULA — Without a wealth of experience off the bench, the Montana women's basketball team struggled to keep pace with Idaho State Saturday.

The Lady Griz looked good early in both halves, but they couldn't match the explosiveness or 3-point shooting of the Big Sky Conference-leading Bengals. Idaho State built a comfortable lead midway through the second quarter and was never seriously threatened in posting a 72-56 win at Dahlberg Arena.

The Bengals hit 11 triples to Montana's two and owned a 21-8 advantage in bench points. The Lady Griz struggled to take care of the ball, piling up 18 turnovers.

"Give credit to them. They're a very good team that's experienced and efficient," Montana coach Mike Petrino said. "If they hit 11 3s, they're going to be tough to beat.

"I'm proud of our effort. We still have room to grow ... Me, I'm thinking about our next practice and how we can do better taking care of the ball and scoring outside the paint."

Montana fell to 9-7 in league play and 12-9 overall and is now in jeopardy of dropping to the No. 6 seed for the league tournament. The Lady Griz may need to win at Idaho (14-6) in Friday's regular-season finale to avoid having to play a first-round tourney game on March 8.

Idaho State (14-2, 18-3) moved within one win of clinching an outright Big Sky regular-season championship. All the Bengals need is to split with Eastern Washington at home this week to earn the top seed for the conference tourney.

Abby Anderson enjoyed a big start for Montana Saturday, scoring eight points in the first six minutes as the Lady Griz built a 12-7 lead. But the Bengals answered with a game-defining 22-2 run.

"Our girls showed resiliency to come back from a tough night Thursday, and we had a good start," Petrino said. "The first five minutes we don't have any turnovers today, then we have nine the next 15 minutes.

Montana trailed by nine at intermission but crept back within six, 46-40, with just under seven minutes left in the third quarter. Then the Lady Griz went cold, hitting just one shot the rest of the period.

Montana trailed 53-42 with one quarter left and failed to draw any closer down the stretch.

"Thursday's (30-point loss) definitely hurt us," said Montana forward Carmen Gfeller, who led all scorers with 19 points. "We took that to heart, and we were ready to take it to them this game.

"You just have to get over that hump, and we weren't able to do it ... They don't take very many bad shots, so you really have to make them work for them. They make us work on defense and they wear us down."

Idaho State shot 49.2% (30 for 61) and was led by Callie Bourne with 17 points. Teammate Montana Oltrogge scored 13 points behind three 3-pointers and Estefania Ors scored 12 points thanks to four 3-pointers.

Photos from the second game of a two-game series between the Lady Griz and Idaho State Bengals at Dahlberg Arena, Saturday, Feb. 27, 2021 in M…