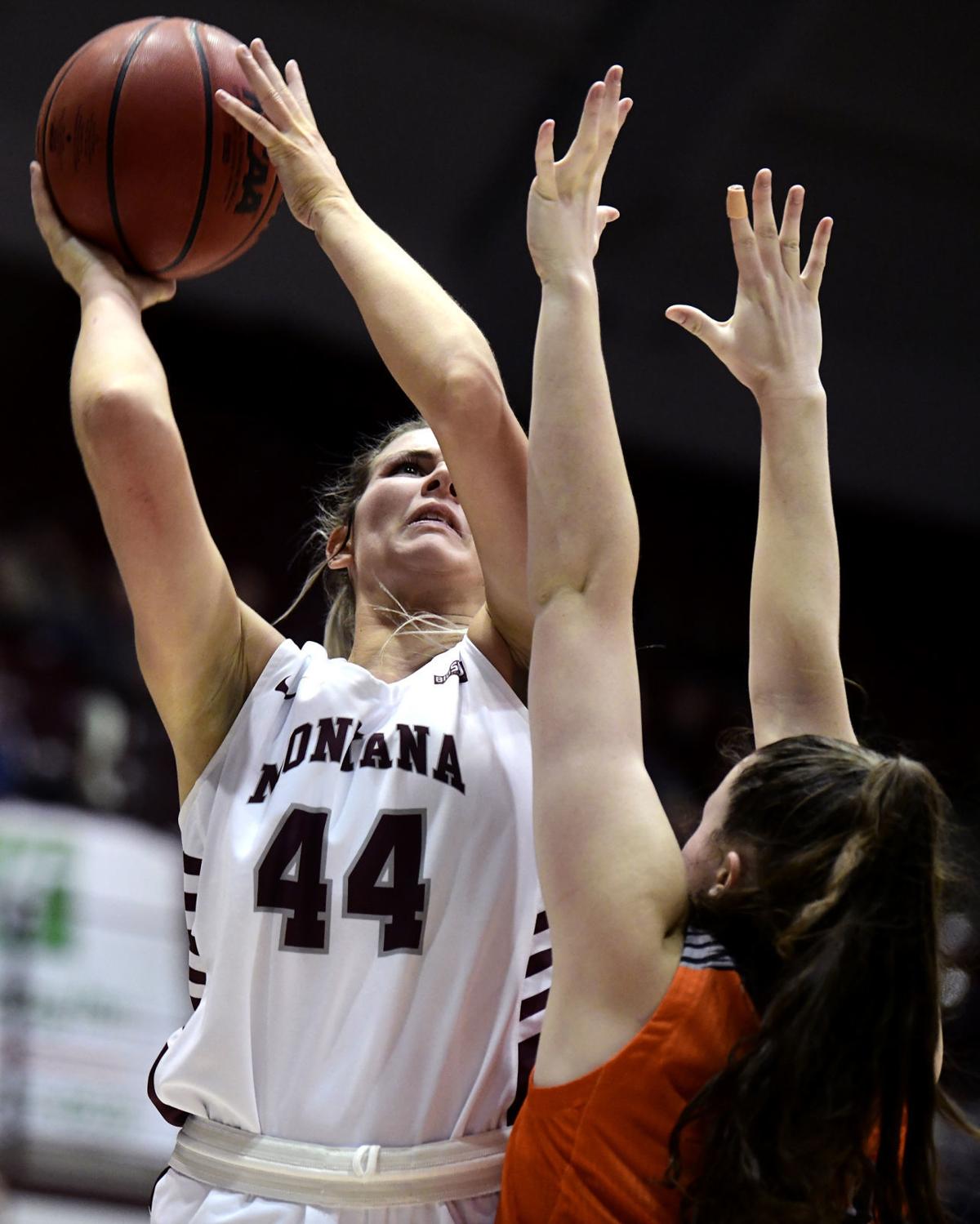 Montana's Emma Stockholm (44) drives to the basket against Idaho State's Delaney Moore during their game at Dahlberg Arena on Thursday night. The Bengals defeated the Lady Griz, 67-53. 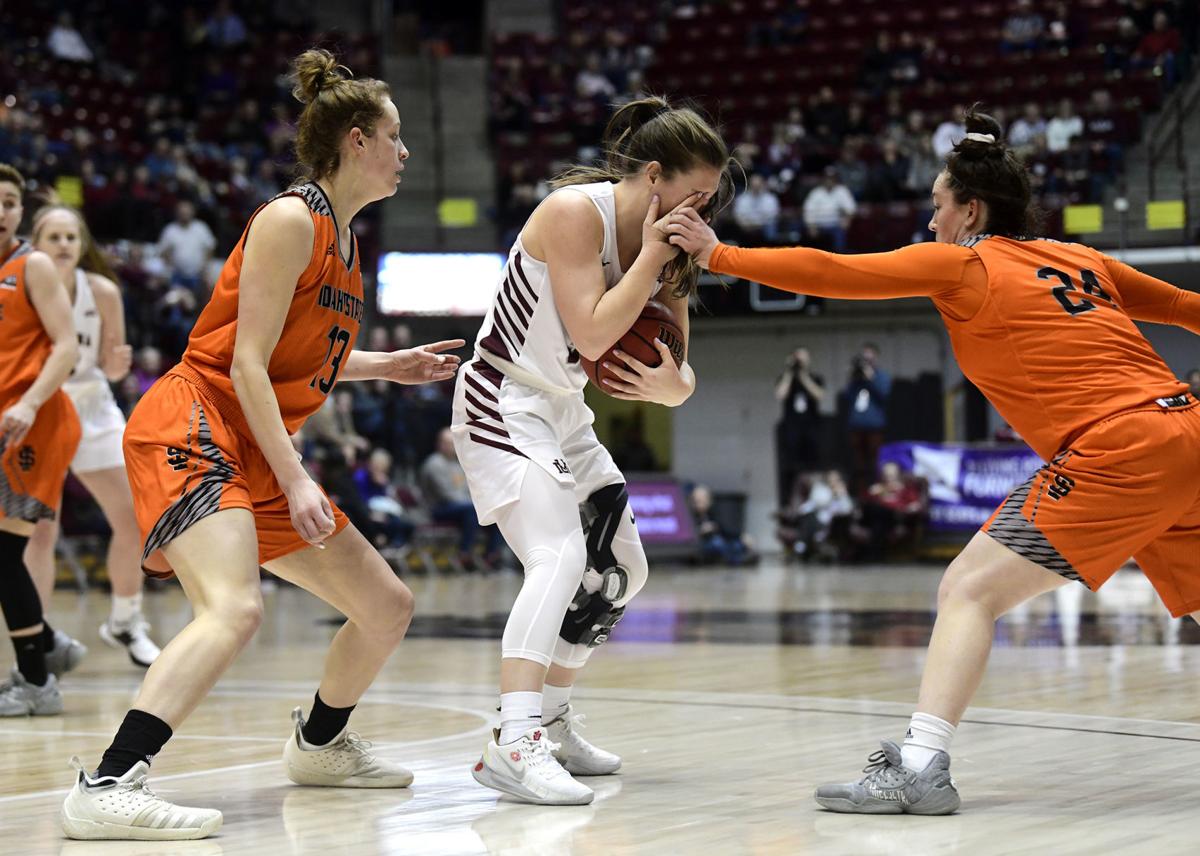 Montana's Emma Stockholm (44) drives to the basket against Idaho State's Delaney Moore during their game at Dahlberg Arena on Thursday night. The Bengals defeated the Lady Griz, 67-53.

MISSOULA — Montana was Montana's worst enemy when it mattered most Thursday night.

Idaho State reserve Montana Oltrogge caught fire early in the fourth quarter, hitting four straight shots to spark the Bengals past the Lady Griz, 67-53, in front of 2,445 fans at Dahlberg Arena. Oltrogge, a sophomore from Phoenix who averages about seven points per contest, finished with a game-high 18 on 8-for-12 shooting.

"This is one of the first games all year I felt like we didn't compete very well," Lady Griz coach Shannon Schweyen said. "It's disappointing. Coming off a couple (road) losses you'd think you'd be fired up and ready to go."

Montana (4-4 Big Sky Conference, 9-8 overall) was in good position when McKenzie Johnston hit a pair of free throws to put the team in front, 40-39, with just over 3 minutes left in the third frame. Idaho State answered with a 7-0 run, highlighted by Callie Bourne's 3-ball off the backboard, but the Lady Griz clawed back and trailed by just two with 9 minutes remaining.

That's when Oltrogge caught fire. She hit a triple, then a couple long deuces, then another long jumper to give her team a 57-49 lead with 3:50 left. From there it was matter of holding on.

"A couple things were drawn up for her," Idaho State coach Seton Sobolewski said of Oltrogge, who scored half of her 18 points in the final frame. "A specific play to have her come off a down screen and then hand off. She got some great looks and she made them.

"If we can get her open enough she's a good shooter. That was the momentum changer, her hitting back-to-back shots. It gave us hope to keep fighting."

Oltrogge's hot shooting wasn't the only key to Montana's demise. The Bengals' vaunted defense also played a role. The Lady Griz led 34-33 at halftime behind 14-for-31 shooting, but Idaho State (4-4, 8-9) made a halftime adjustment and the hosts hit just 4 of 23 shots in the second half.

The first half was a back-and-forth affair with 16 lead changes. Reserve Gabi Harrington had a decent start with eight points through two quarters for UM, but Schweyen was not pleased with the performance of her team overall.

"We didn't come ready to go," she said. "I mean, it just felt like we were flat at the beginning of the game and we let them get off to a good start.

"Then we never picked up our intensity. It was frustrating on defense just to have that lack of intensity tonight. They had way too many easy looks. We had no hustle on D on certain actions."

The Lady Griz were ice cold in the third frame, hitting 1 of 11 shots from the floor. Still, they trailed by only four heading into the final frame and Idaho State's lead was cut to 46-44 on a Johnston basket with 9:24 left.

Then came Idaho State's fateful 11-5 run, with nine of the Bengals' points coming from Oltrogge. Montana tried to rally but couldn't overcome its 3 for 12 shooting in the final frame.

"A bunch of 1-footers on out-of-bounds plays and you know, those gotta go," Schweyen said of her team's shooting woes. "Credit to Idaho State for their defense. I mean, they're one of the better defensive teams in the league. We needed to hurt them in the paint and we didn't hurt them as much as we should have."

Montana will try to snap its three-game skid when it plays host to Weber State (3-14) on Saturday. The Wildcats were blown out at Montana State Thursday. 81-52.