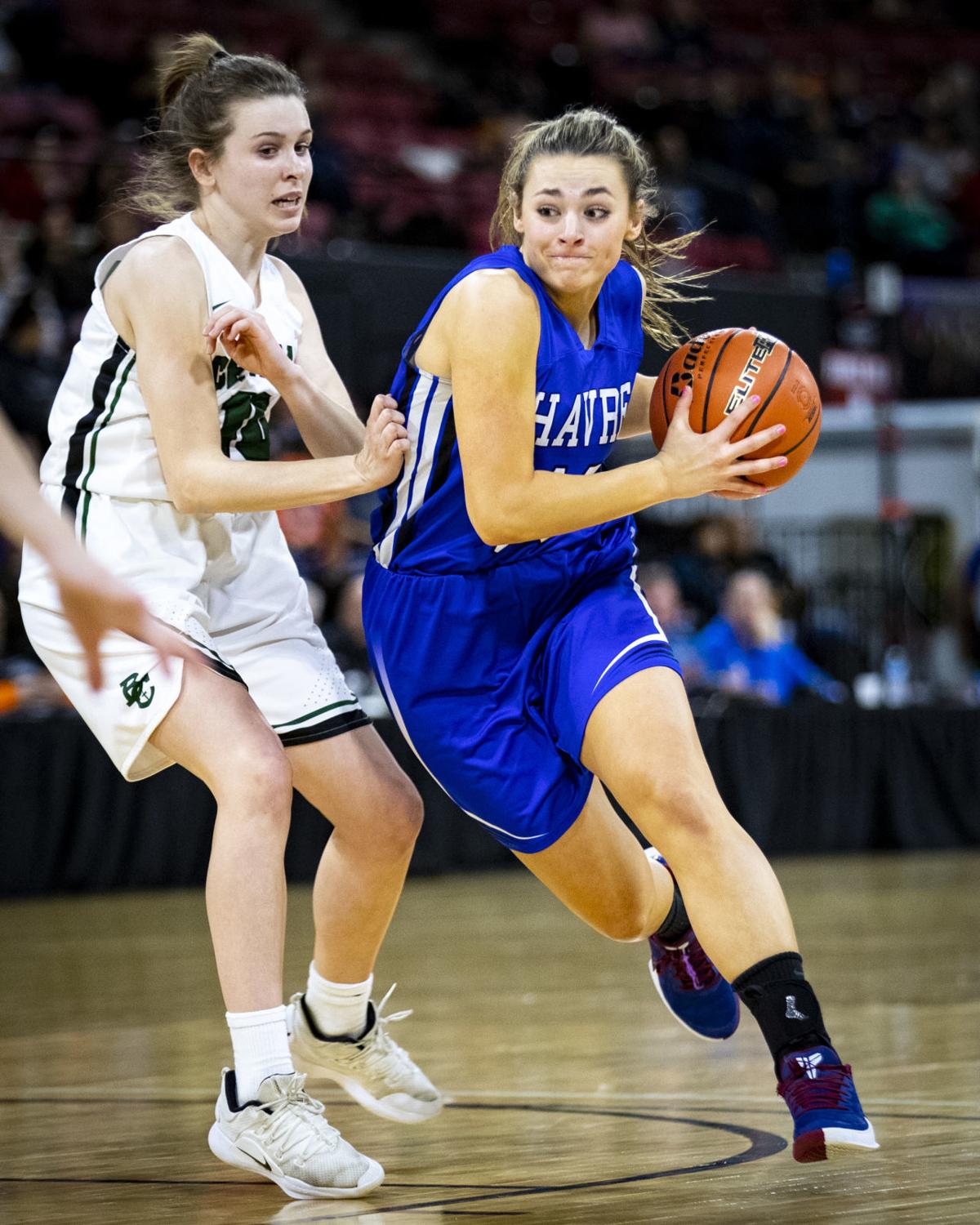 Havre's Kyndall Keller (10), shown against Billings Central during the Class A state semifinals on March 13, has wanted to play for the Montana women's basketball team since she was little. 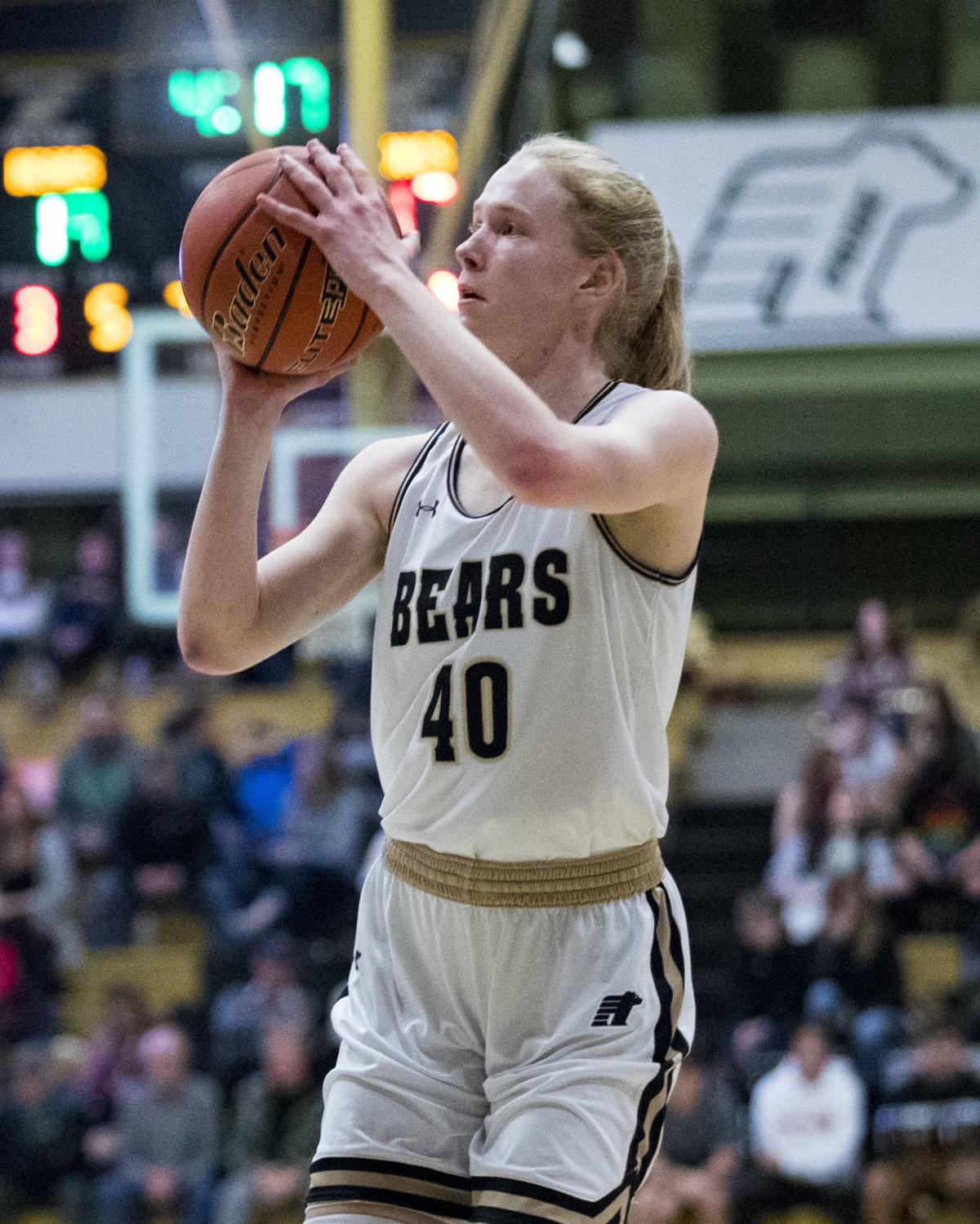 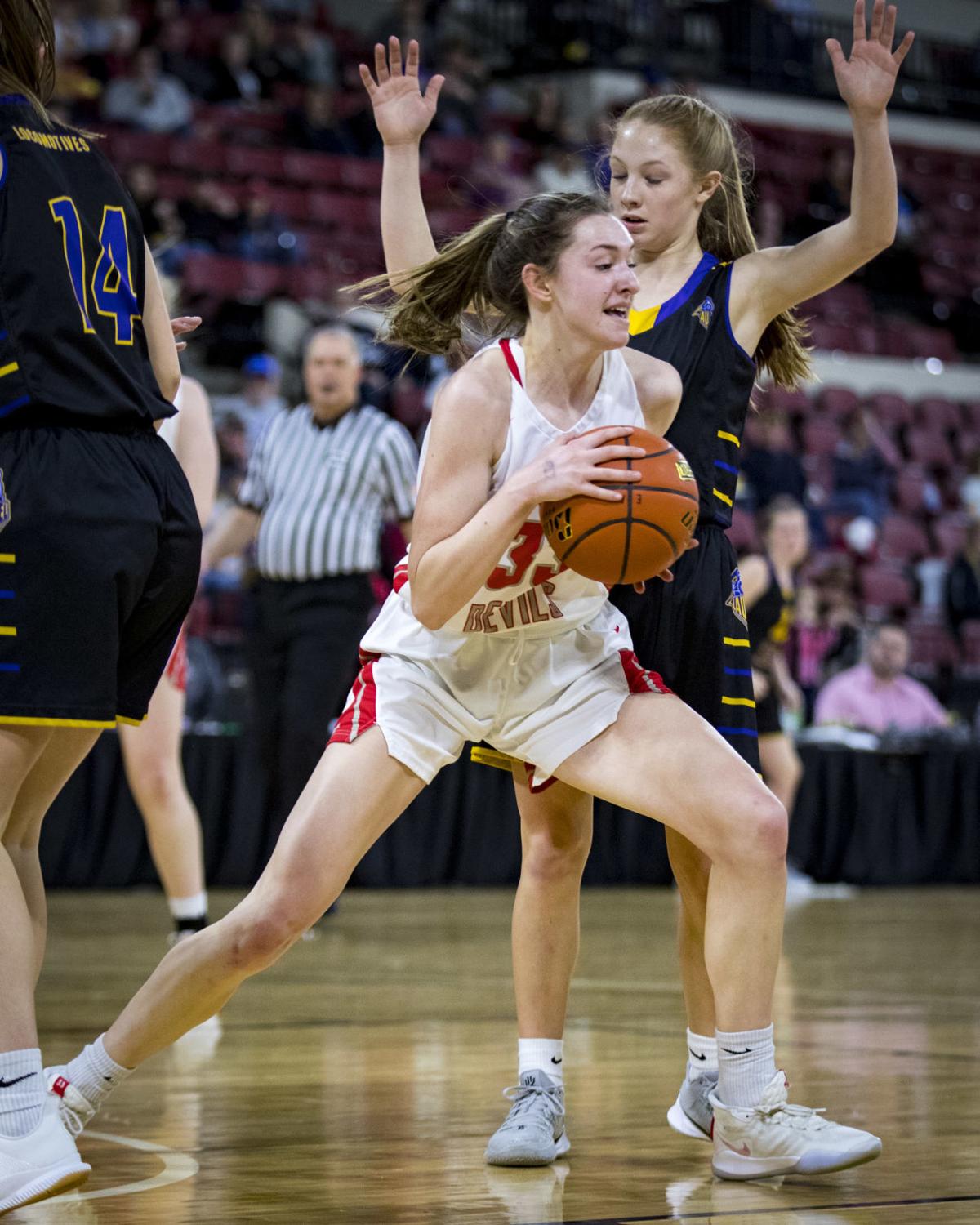 Glendive's Karsen Murphy looks for some space to shoot during the Red Devils' game against Laurel in the first round of the Eastern A Divisional Tournament at First Interstate Arena at MetraPark on Feb. 26. 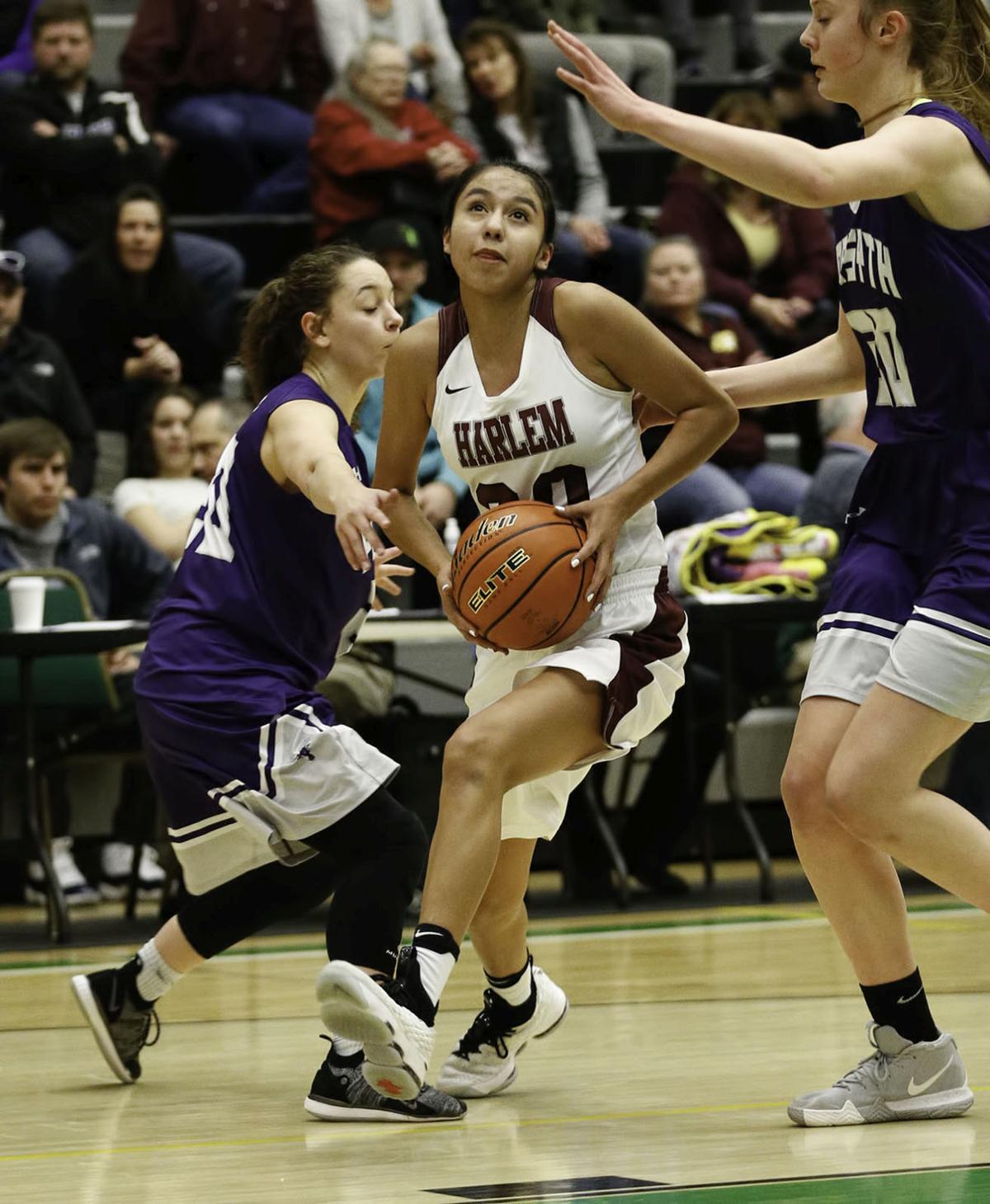 Harlem’s L’Tia Lawrence splits the Forsyth defenders for a layup during the Class B state girls basketball tournament on March 7, 2019, in Belgrade. 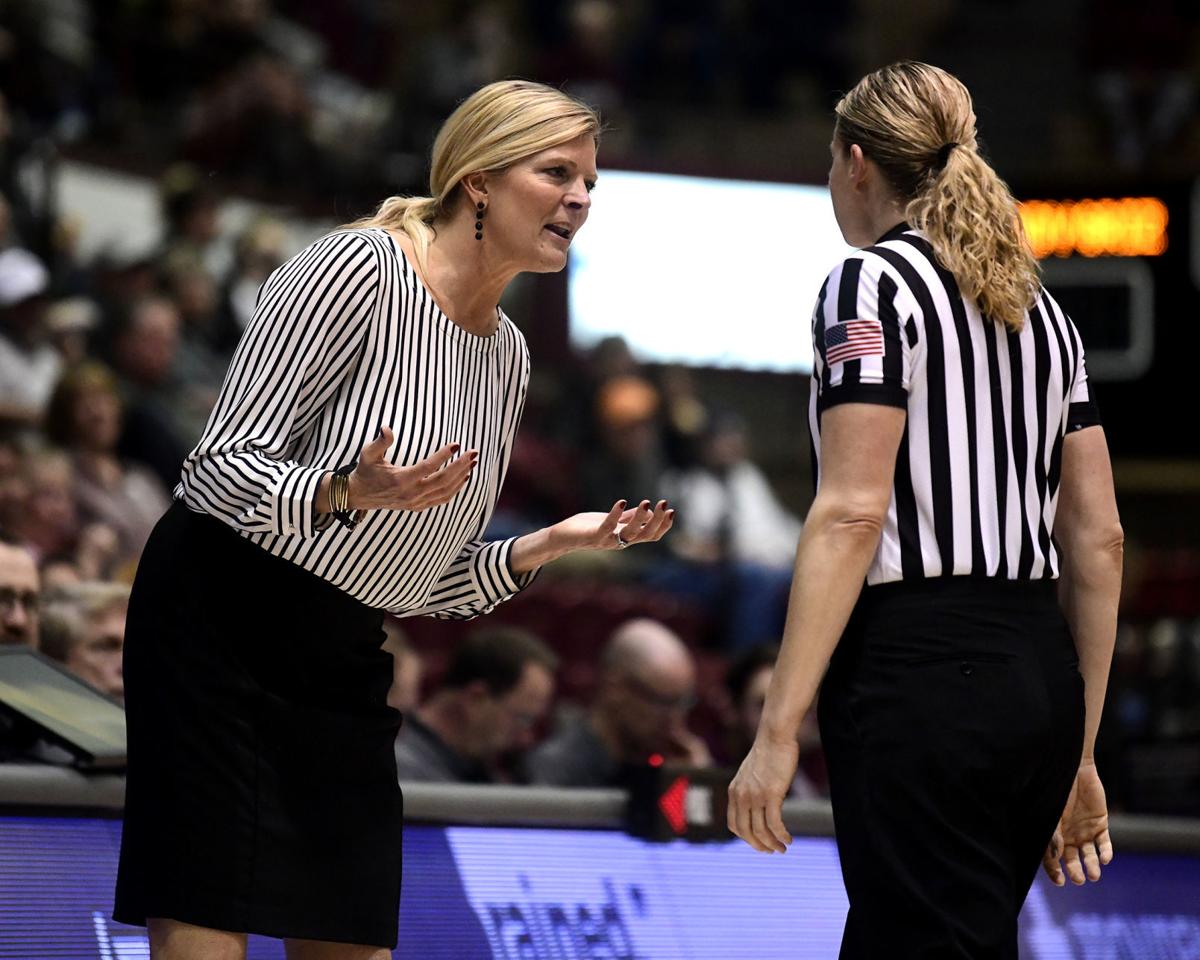 Montana head women's basketball coach Shannon Schweyen speaks with an official during an 85-57 victory over Weber State on Jan. 25 in Missoula.

Havre's Kyndall Keller (10), shown against Billings Central during the Class A state semifinals on March 13, has wanted to play for the Montana women's basketball team since she was little.

Harlem’s L’Tia Lawrence splits the Forsyth defenders for a layup during the Class B state girls basketball tournament on March 7, 2019, in Belgrade.

Montana head women's basketball coach Shannon Schweyen speaks with an official during an 85-57 victory over Weber State on Jan. 25 in Missoula.

BILLINGS — Kyndall Keller is almost amused by bad news at this point.

Three weeks ago, Keller was trying to lead the Havre girls basketball team to its third straight Class A state title. The Blue Ponies lost to Billings Central in the semifinals on Friday, March 13, and the bad luck was just getting started.

Because of the coronavirus pandemic, the final day of the state basketball tournaments was canceled, schools and other businesses were closed throughout the state, spring sports were suspended and Montana residents were ordered to stay home for the foreseeable future.

On Tuesday, the University of Montana did not renew Shannon Schweyen’s contract as women’s basketball coach. Keller is one of four in-state seniors signed or committed to play for the Grizzlies, and all of them reacted to the news with surprise and sadness. Keller felt a sense of “here we go again.”

“This year’s just been crazy so far,” Keller said Thursday, “and it hasn’t barely started yet.”

Schweyen’s exit was upsetting but not a deal-breaker for the four seniors. They, as well as Helena Capital junior Dani Bartsch, are still 100% committed to playing for UM, they told 406mtsports.com on Thursday.

Keller, Billings West’s Willa Albrecht and Glendive’s Karsen Murphy have all signed letters of intent with Montana. Harlem senior L’Tia Lawrence committed to the Lady Griz on Tuesday after originally signing with Montana State-Northern, and Bartsch committed in October.

Keller “got a sick feeling in my stomach” when she heard that UM and Schweyen were going separate ways, she said. Albrecht also felt surprised and praised Schweyen’s standout UM career, which includes All-American accolades as a player and 28 years on the coaching staff, including the last four as head coach.

“I was a little taken aback. I’m still processing it,” Murphy said. “It’s kind of upsetting that I never got to be coached by her.”

Wednesday’s news was especially jarring to Lawrence, who chatted with Schweyen over the phone Tuesday. Not once during the conversation, which revolved around Lawrence’s commitment, did the Harlem point guard sense that Schweyen would be gone a day later.

“I was really surprised and a little confused,” Lawrence said. “I was like, ‘What happens now?’”

The signees/commits might change their minds about UM after Schweyen’s successor is announced. She was a major factor in all of their decisions, from her personality to her coaching style. The new coach might not like some, or any, of these players as much as Schweyen does.

But the four seniors and Bartsch didn’t choose the Lady Griz solely because of Schweyen.

“I’m still super excited to play there,” Albrecht said. “There are other factors that I find just as important as coaches.”

Some of those factors include UM’s community support, the Lady Griz’s current and future players and the campus.

UM was the only school to extend an offer to Murphy for basketball. That probably wouldn’t have happened without Schweyen, but her absence won’t extinguish the confidence Murphy feels that she can play at the Division I level.

“Just the fact that she saw a lot of potential in me gives me a lot of motivation to go up there,” Murphy said. “I’m just still blessed that I have an opportunity to be a Griz.”

Lawrence has been a Griz fan since her father took her to a basketball camp in Missoula when she was young. Playing for UM — or rival Montana State — is a lifelong goal for many in-state athletes.

That’s certainly the case for Keller, who chose UM over Carroll College. She was devastated to learn that Schweyen won’t return, but she still has something to look forward to in this brutal year.

“I’ve always wanted to play for the University of Montana. That’s been my dream,” Keller said. “I’ve got to give it a shot.”

Schweyen was 52-69 in four seasons as head coach of the Montana Lady Griz.