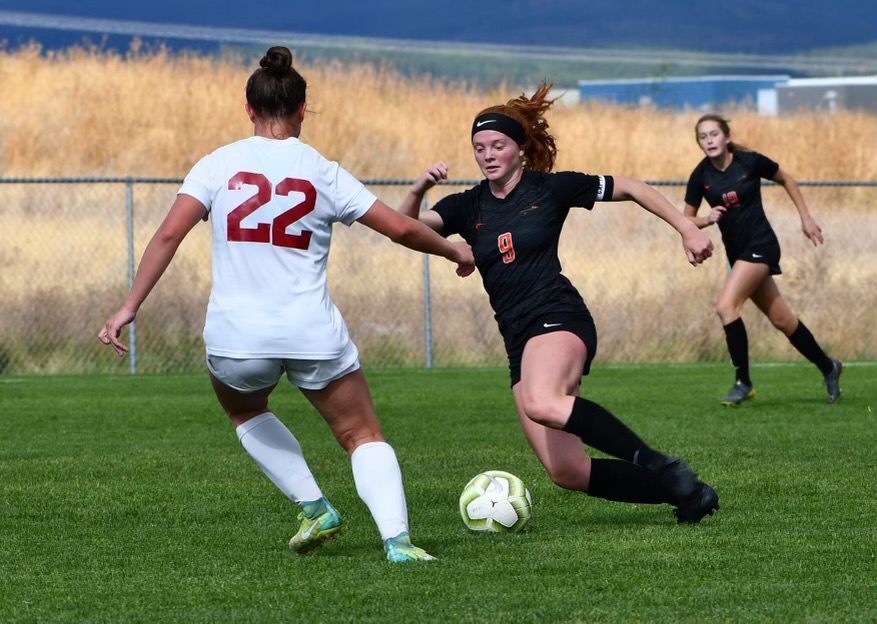 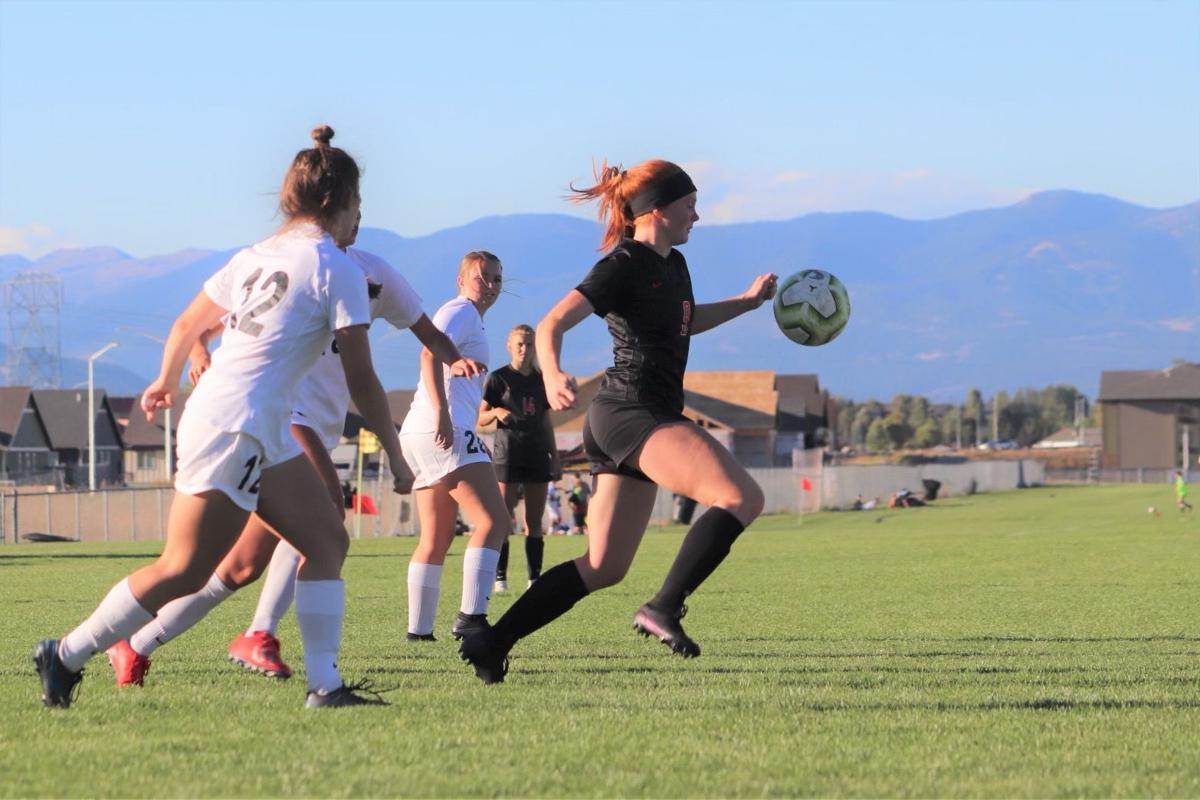 Kalispell Flathead's Skyleigh Thompson (9) keeps her focus on the soccer ball during a game earlier this season. 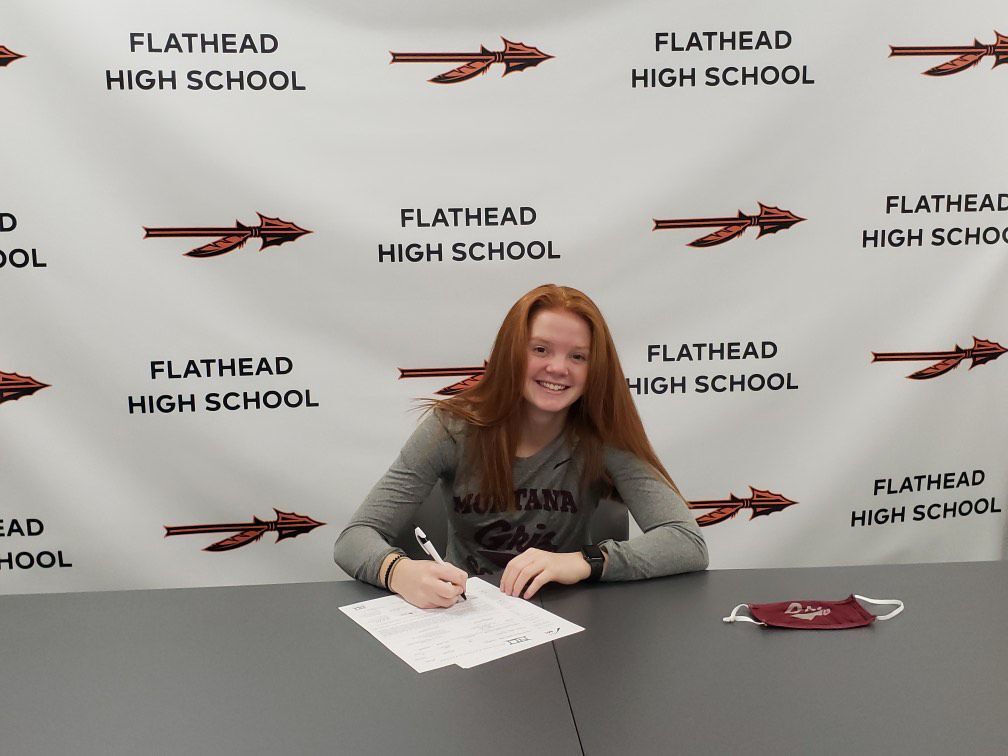 Kalispell Flathead's Skyleigh Thompson (9) keeps her focus on the soccer ball during a game earlier this season.

MISSOULA — Skyleigh Thompson isn’t one to be denied.

Defenders have had a hard time slowing down the Kalispell Flathead senior on the soccer field over the past four years as she’s netted goal after goal. She also hasn’t been stopped by the high expectations she’s placed on herself, finding an internal motivation that led her to playing soccer at the high school, club and travel levels on a year-round basis.

A driven individual, Thompson shot for the stars, became a four-time all-state player and landed with the Montana Grizzlies, signing her National Letter of Intent on Wednesday on National Signing Day.

“I just love competing,” Thompson said of how she developed her dedication to soccer. “Team sports have always been super fun because you get to go through all the stuff with people you become super close with. I fell in love with the feeling of scoring goals. It’s a great feeling.”

Thompson’s scoring abilities piqued the interest of Montana soccer coach Chris Citowicki and helped her land a spot at Montana. With her deft touch and powerful boot, she racked up 53 goals and 20 assists in her high school career, leading all of Class AA as a junior despite a foot injury and ranking first in the Western AA conference as a senior.

The awards followed for Thompson. She’s believed to be one of just a few four-time all-state players, she was named the 2019 Western AA conference player of the year and she earned 2020 preseason All-American status.

“She’s got a technical base where if you watched her in practice, she’s knocking the ball around well, she just fits in,” Citowicki said. “When it comes to games, she wins games, and that’s what you want, not just working hard. She’s got that level of competition. You’ve got to take somebody like that.”

Scoring goals wasn’t always Thompson’s priority. She had played defender until midway through her freshman season, when she was moved up to forward and wing.

It was around that same time where Thompson became engrossed in the sport, stopping swimming and basketball. Soccer became a year-round endeavor for Thompson, who played with Flathead Valley United club soccer and on out-of-state travel teams with Rocky Mountain FC and the Montana Development Program, part of the Olympic Development Program.

The travel teams presented her with opportunities to play in showcases and tournaments in front of college coaches. She also visited Montana soccer camps and was offered as a junior, choosing the Griz over Eastern Washington and some smaller schools.

“The coaching is just unlike anything I’ve ever seen and been around,” Thompson said. “I love their philosophy centered around family and hard work. That made them stand out.”

Thompson knows something about working hard to achieve her goals coming from a family of athletes. Her father, Flathead wrestling coach Jeff Thompson, wrestled at the University of Minnesota. Her mother ran cross country and track at Pacific Lutheran. And her sister plays soccer at University of Providence in Great Falls.

As a coach himself, Jeff knows what it takes for an athlete to make the college level. He also knows about the potential burnout factor, but he felt he never had to worry about that with Skyleigh.

She pushed herself to excel in the sport, just like she has in the classroom, where her interest in psychology, which has led to her planning to study criminology or cognitive neuroscience in college, has benefited her on the field. She owns a 4.0 grade-point average to rank first out of 261 kids in her graduating class while also serving as the school’s student body president.

“That internal drive is just something she has,” Jeff said. “It’s the way she’s wired. She’s addicted to that work.”

Thompson had to grow up fast playing soccer. She started in the sport because her sister got involved, playing up on teams with her sister and older kids because it made carpooling easier.

Challenging herself paid dividends along the way and should benefit her when making the jump to the Division I level. She’ll bring with her the fast-twitch muscles evident on the soccer field and on the track, where she was an all-state sprinter in the 400-meter relays as a freshman and sophomore.

“She’s just a strong athlete,” said Citowicki, who led Montana to the 2018 Big Sky tournament title and the 2019 Big Sky regular-season title in his first two seasons. “At this level, you’ve got to be athletic. That’s just baseline. She has this ability to score goals, which is so uncanny, so unique. It isn’t an accident. That’s what we saw, what we wanted was that athlete.”

Heading to Montana, Thompson will be immediately thrown into the deep end of the pool, Citowicki analogized. Like other in-state players who join the Griz, the room for growth is large compared to athletes coming from warmer climates who can play the sport more, against tougher competition and with a higher level of coaching.

Flathead coach Bledy Doda, who named Thompson a captain as a sophomore, has seen enough to know she’ll be ready.

“Skyleigh is extremely hardworking,” Doda said. “She is a girl who is very self-motivated. That makes her a natural leader.”

For Thompson, who went through all the non-stop work and stressful recruiting, Wednesday was a day to bask in the glow of the success she made sure she wouldn’t be denied.

“When it finally kind of pays off,” Thompson said, “it just feels so very good.”

In addition to Thompson signing with UM, several other area athletes inked with a college program on Wednesday, the first day of the NCAA signing period for athletes in all sports except football.

Missoula Sentinel's Sierra Dennison made her commitment official with Montana for volleyball.

The Montana Grizzlies soccer team signed eight players on the first day of the early signing period, including one in-state standout.