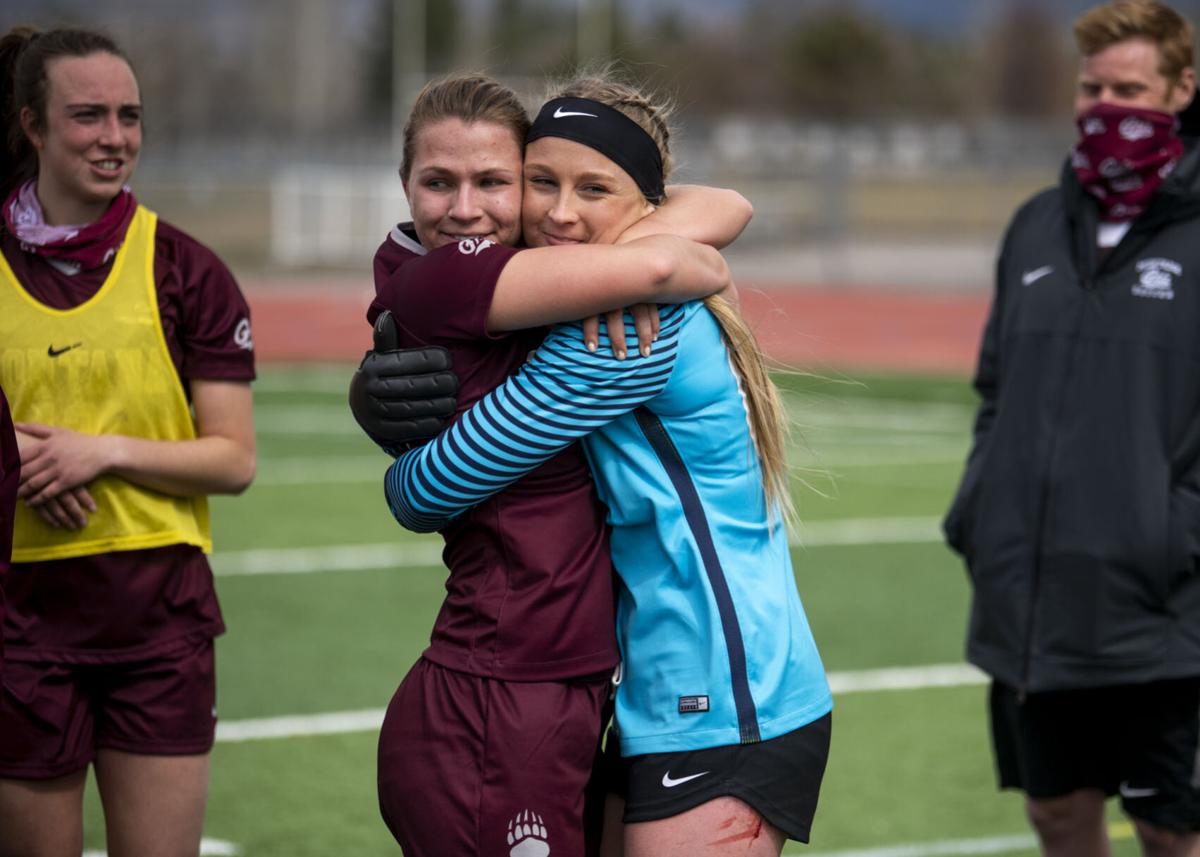 Montana midfielder Raye Burton, left, hugs goalkeeper Claire Howard, right, following their victory over Portland State on Sunday at Missoula County Stadium. The Griz defeated the Vikings, 3-0, to improve their record to 5-0 as Howard broke the Big Sky Conference career record for shutouts with her 30th. 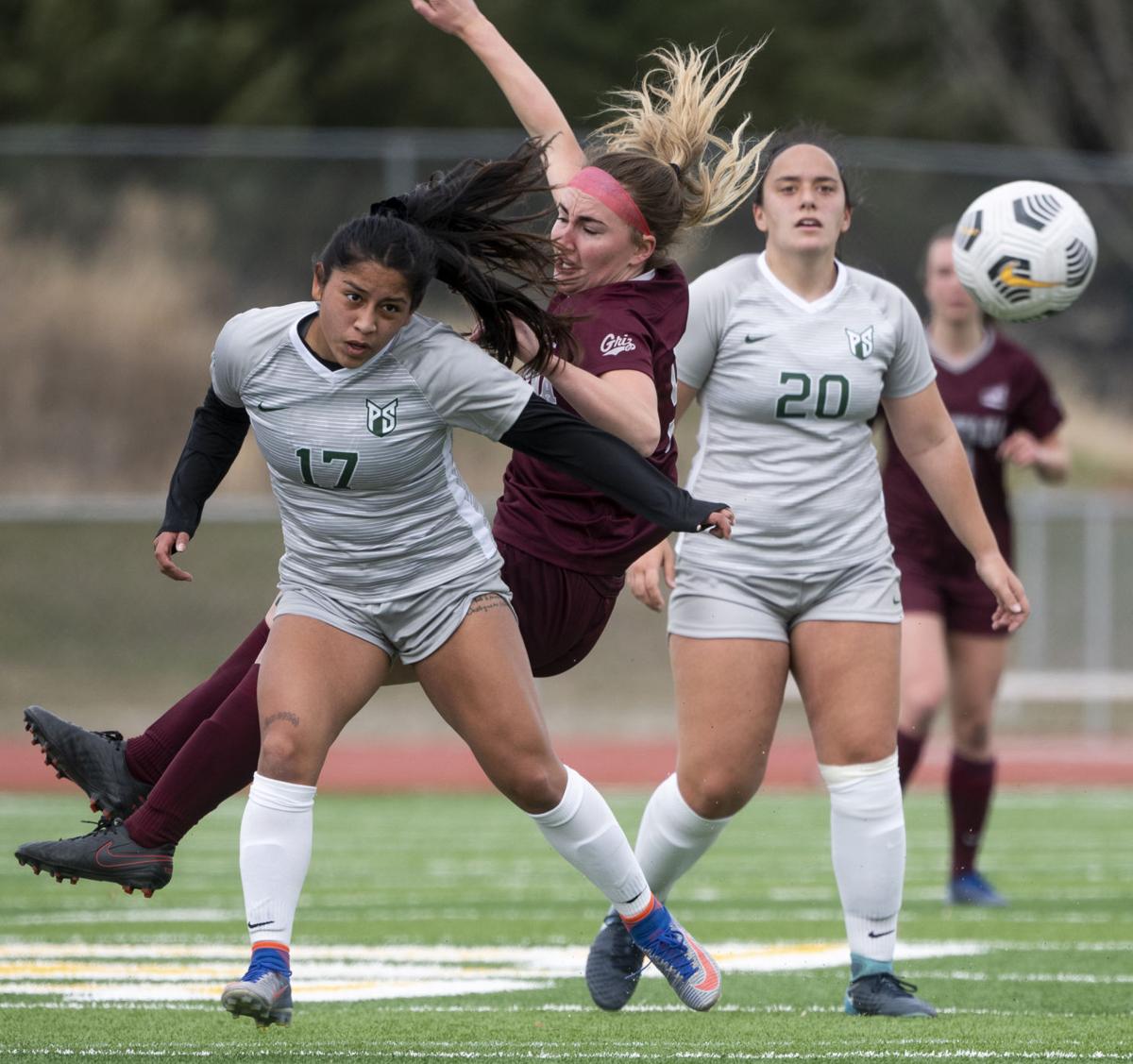 Montana midfielder Sami Siems, rear, loses her footing while vying for the ball against Portland State midfielder Natalia Blanco, front, during the soccer match between the Griz and Portland State on Sunday at Missoula County Stadium. 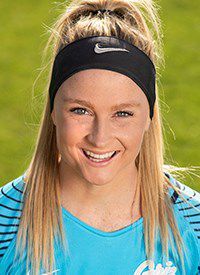 Montana midfielder Raye Burton, left, hugs goalkeeper Claire Howard, right, following their victory over Portland State on Sunday at Missoula County Stadium. The Griz defeated the Vikings, 3-0, to improve their record to 5-0 as Howard broke the Big Sky Conference career record for shutouts with her 30th.

Montana midfielder Sami Siems, rear, loses her footing while vying for the ball against Portland State midfielder Natalia Blanco, front, during the soccer match between the Griz and Portland State on Sunday at Missoula County Stadium.

MISSOULA — Not much catches Claire Howard off guard on the soccer field, but her Montana teammates got her good when they snuck up behind her and dumped a teal-colored cooler filled with water on her head.

The smile-inducing gesture was the final celebration of Howard on an overcast, windy Sunday at Missoula County Stadium. The team had taken her down in a dog pile on the field and then lifted her up on their shoulders as they celebrated the Grizzly senior etching her name in the Big Sky Conference record book for most career shutouts.

“It’s amazing. It’s extremely humbling to know the love and support that I have,” Howard said after UM moved to 5-0 overall and 4-0 in conference play with a 3-0 win over Portland State. “I always say that it takes a village to accomplish anything, and our village is pretty special.”

Howard’s jersey that got soaked with water features the number 00, which has been her jersey number since she was in club soccer. She chose that because she liked how zeroes represented shutouts, and she was all about getting as many shutouts as she could.

That was long before she came to Montana from Santa Rosa, California, and recorded 30 shutouts in 67 games. A four-year starter, she had seven clean sheets in 2017, 10 in 2018 and nine in 2019. She collected her fourth in five games this spring season on Sunday after the Big Sky didn’t play a fall slate.

“I love knowing that someone has to beat me to score,” Howard said of how she’s embraced being a goalie, which she said she didn’t start playing until she filled in one summer during club soccer when a teammate went on vacation. “I love that pressure, and I love that moment of ‘I’m the one you have to get the ball past.’”

Howard can’t capture the shutouts alone, and her humility shows through in how quickly she credits her teammates in front of her. She likes predictability and routine, but that can be fleeting in an isolating position like goalkeeper and in a sport that can change on a dime, so she takes care to make sure her defenders are set up in the proper positions.

The 5-foot-7 goalie directs those teammates with her voice, telling the defense where to line up, where to move or which opposing players to key on, which was especially evident on free kicks and corner kicks Sunday. That voice she’s developed over time is what third-year coach Chris Citowicki said separates her from other goalies.

“Her ability to communicate, lead and organize is a piece that a lot of people end up missing,” Citowicki said. “She has control. She has presence. And that’s what makes her so good. She makes saves even when she doesn’t make a save because she organizes the back line and tells people where to be. That is her superpower right there.”

Howard needed those superpowers late in Sunday's game as she tried to secure her 30th career shutout, which broke the record held by Sacramento State's Savannah Abercrombie, who set it from 2008-11. Portland State came with shot after shot as it tried to get on the board in the closing minutes, and Howard answered with save after save.

She had been gifted a 1-0 halftime lead as senior Taylor Stoeger slotted home a pass that was placed into the box on a free kick. The Griz extended that lead in the second half when senior Alexa Coyle scored on a header and sophomore Allie Larsen netted her first career goal.

Larsen’s goal was UM’s first score by someone other than a senior this season. The upperclassman-heavy team returned everybody from the 2019 squad that won the Big Sky regular-season title, and having an experienced team like that takes pressure off Citowicki. It’s especially helpful when he has a talented goalie like Howard.

“This year, she came into it saying, ‘I’m going to try to enjoy my senior year and have fun,’ because she has this tendency like myself of being too serious and forgetting to love the moment,” Citowicki said. “That’s what she’s changed this year a bit. She smiles a bit more at practice and still crushes it but has fun with her teammates at the same time.”

This is Howard’s last hurrah as she won’t be returning for the fall 2021 season even though seniors were granted an extra year of eligibility because of the pandemic. She’s at peace with her decision and is working on a master’s degree in public administration that she’s hoping to put into use in college athletics.

Citowicki thinks Howard is built to be a coach and could step into a coaching role right now. She’s not focusing on that decision yet as she tries to lead the Griz to another Big Sky tournament championship and NCAA tournament berth, which they accomplished in 2018.

“I’m very grateful to be able to represent Montana and be on a team this successful and this loving,” Howard said. “It goes by fast, and you have to take each game and do the best you can because time is fleeting.

“I’m just trying to enjoy every moment and just soak up all the memories that I can with my teammates.”

Montana soccer gets back on track with a win heading into the Big Sky tournament this week.