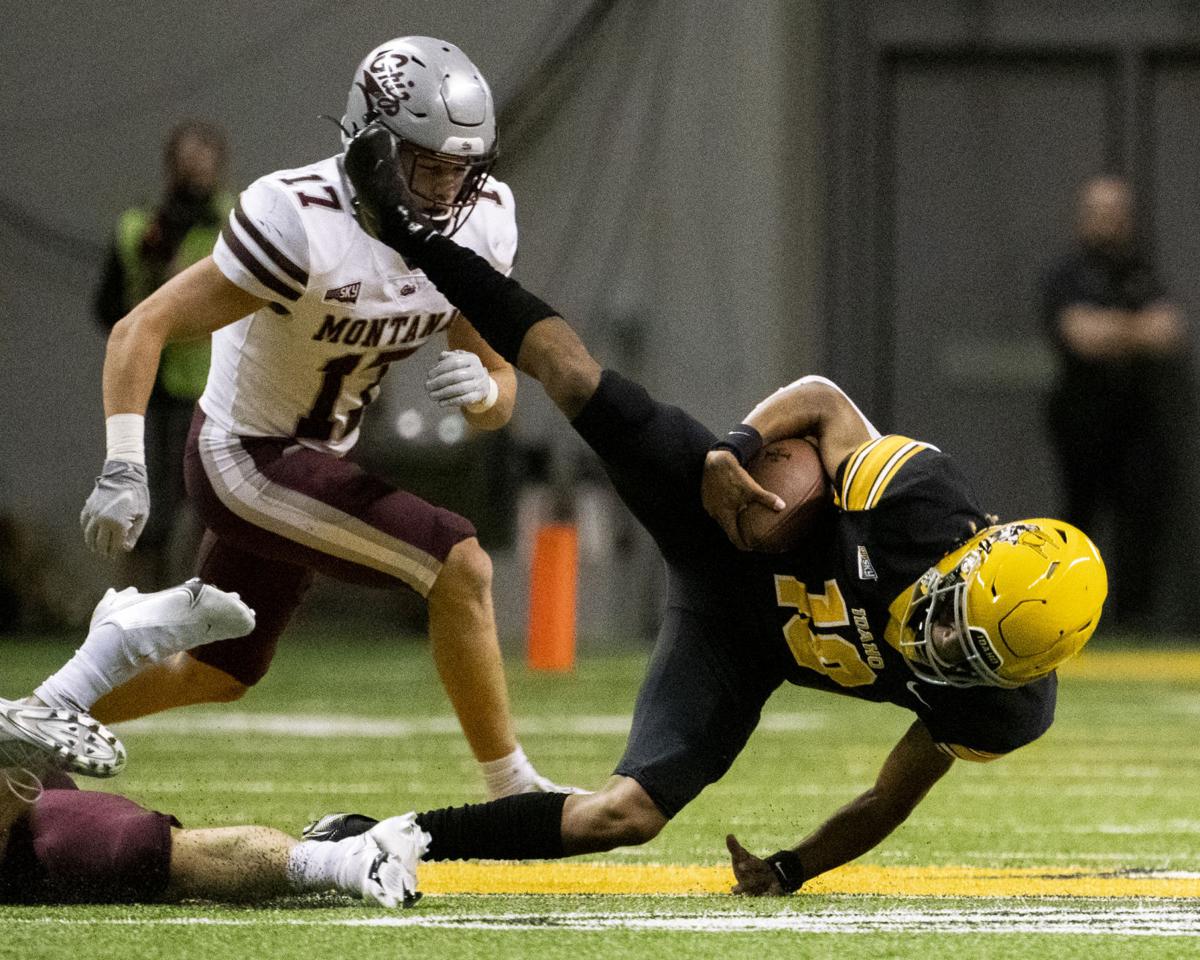 Montana junior safety Robby Hauck pursues Idaho quarterback Gevani McCoy during the Grizzlies' 34-14 win over Idaho on Saturday at the Kibbie Dome in Moscow, Idaho. In the game, Hauck became the 12th player in UM history to reach 300 career tackles and is just two behind his uncle Tim Hauck. 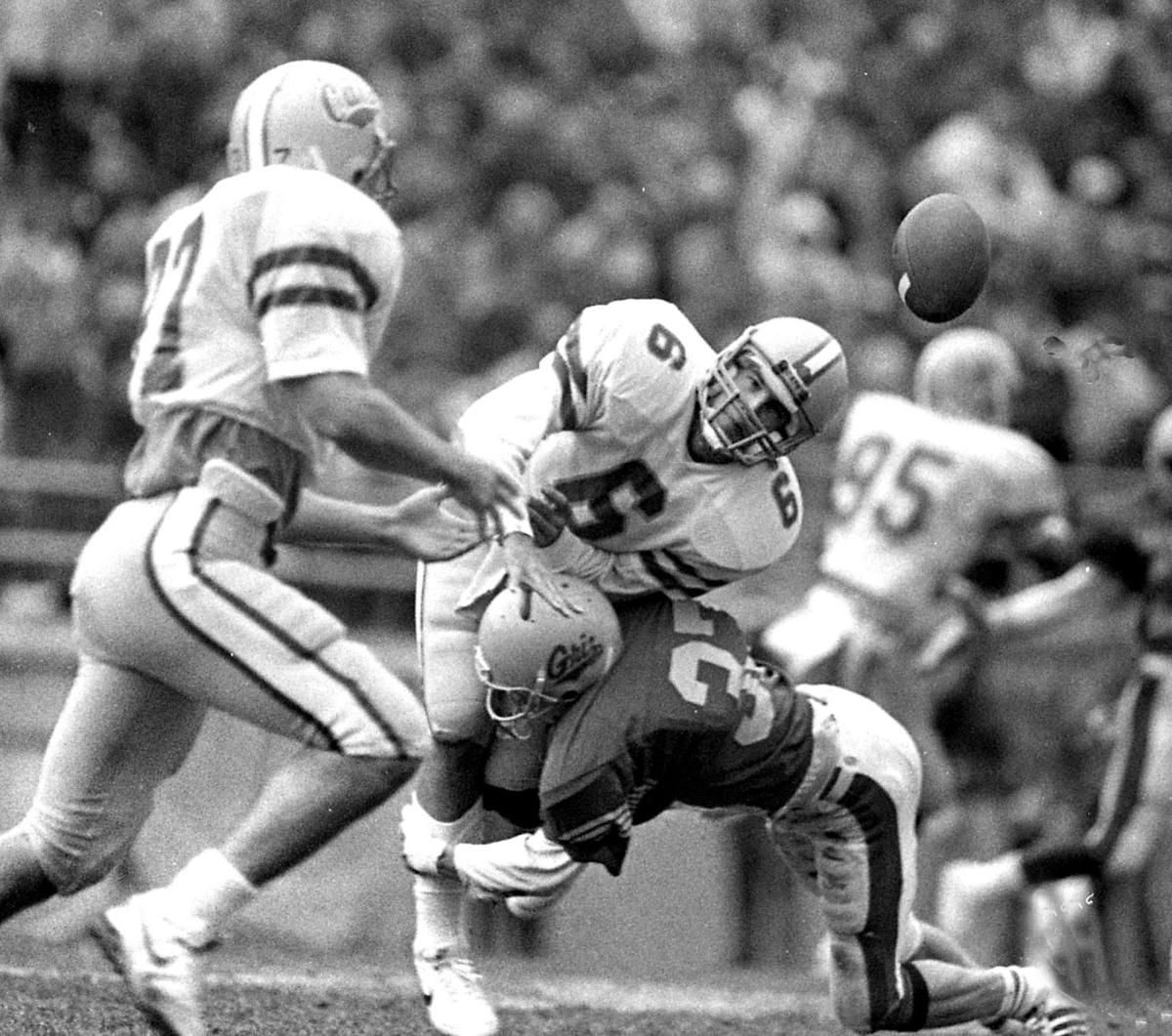 Former Montana safety Tim Hauck (37) puts a hit on Montana State quarterback John Tetrault just as he pitches the ball in the 1988 rivalry game. Hauck officially wrapped up 305 tackles in his Griz career before he went on to play 13 seasons in the NFL. 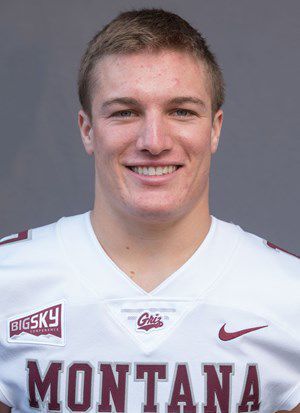 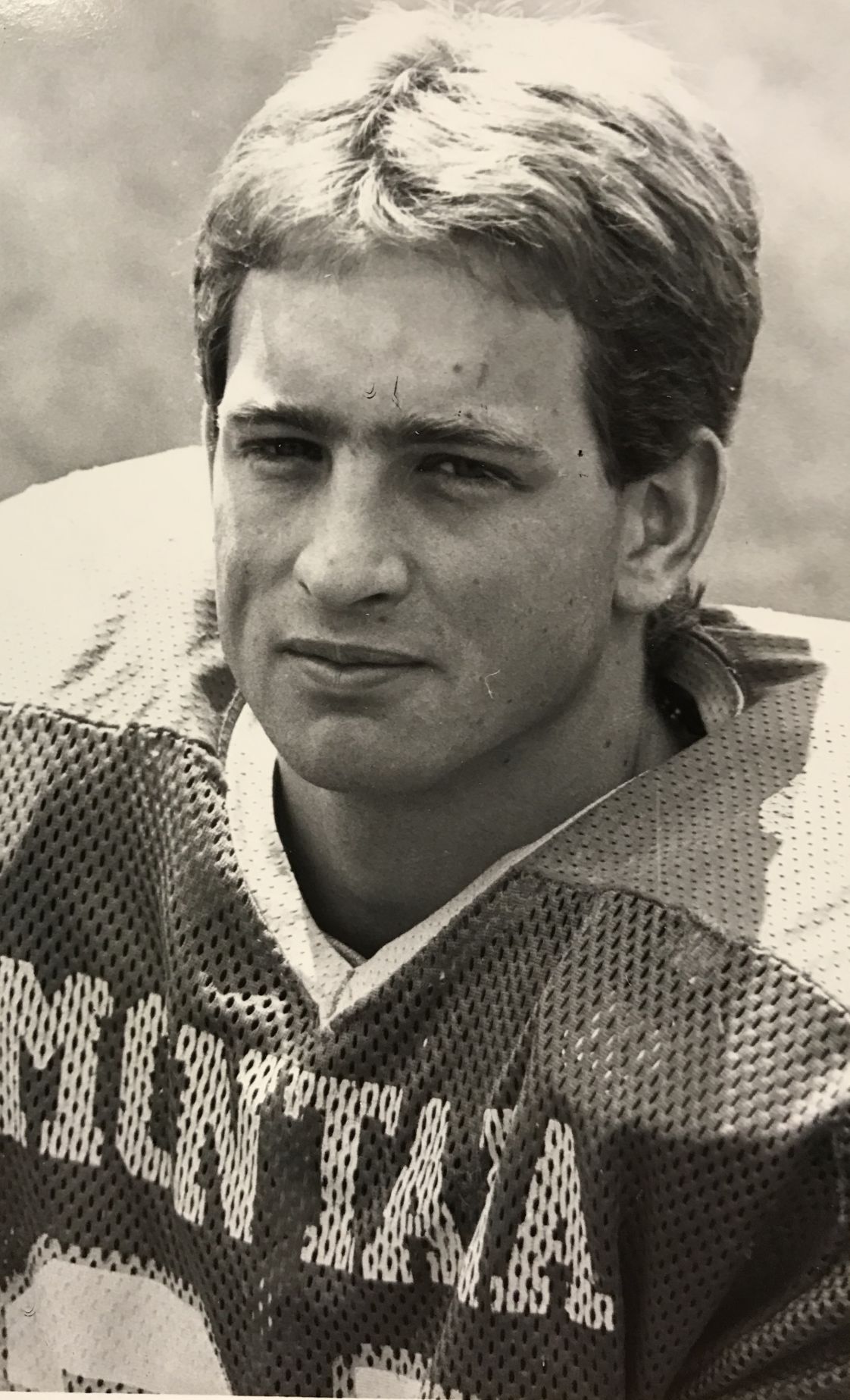 Montana junior safety Robby Hauck pursues Idaho quarterback Gevani McCoy during the Grizzlies' 34-14 win over Idaho on Saturday at the Kibbie Dome in Moscow, Idaho. In the game, Hauck became the 12th player in UM history to reach 300 career tackles and is just two behind his uncle Tim Hauck.

Former Montana safety Tim Hauck (37) puts a hit on Montana State quarterback John Tetrault just as he pitches the ball in the 1988 rivalry game. Hauck officially wrapped up 305 tackles in his Griz career before he went on to play 13 seasons in the NFL.

MISSOULA — Tim Hauck, a former Montana cornerback and safety, was nicknamed “Hitter” during his All-American career from 1987-89.

About 30 years later, that nickname would be a proper fit for his nephew, Griz junior safety Robby Hauck. They’ve both laid punishing hits on opposing players, Tim to the tune of 305 tackles in a career that led him to being a 1998 Grizzly Sports Hall of Fame inductee and the 46th-ranked player on the Big Sky’s list of 50 greatest male athletes in 2013.

Robby has accrued 303 tackles and should pass Tim, 55, in career tackles and move into the top 10 in UM history on Saturday, barring unforeseen circumstances, when the 11th-ranked Griz host Southern Utah at noon at Washington-Grizzly Stadium in Missoula.

“I really didn’t know honestly how close I was, so hopefully I can get it done this coming weekend,” Robby said. “I think that’s pretty special to do. There’s a long list of Grizzly greats, and I think he’s on top of that list. So, it would be a pretty special moment and an honor to be able to do that. I’m pretty excited, if I can do it.”

Robby became the 12th UM player to reach 300 career tackles, which he did in Saturday’s win. He’s sitting at 11th, while Tim is ninth and holds the UM single-game record with 25 tackles.

Tim unofficially had 346 tackles after he transferred to UM as a walk-on sophomore. The NCAA didn’t start counting stats from bowl games and playoff games until 2002, so Tim had 41 tackles in four playoff games that don’t count as official.

Tim, the second Grizzly to wear the No. 37 legacy jersey, went on to play in the NFL for 13 years and coach in college and the NFL. He won a Super Bowl with Philadelphia in February 2018 as an assistant coach.

“I was pretty young when he was playing, but I do remember probably towards the end of his NFL career,” Robby said. “But I also view him kind of similar as my dad as a coach. Talking ball with him and picking his brain on things is pretty special to be able to do.

“I admire the way he played and just the guy he is. It’ll be a cool moment and a special moment because he’s a great guy, a great player, a great coach.”

Robby and Tim share the fact that they were viewed as too small or not good enough to initially play at UM. Tim, who was 5-foot-10 and 187 pounds, began his career at Pacific University in Oregon after UM didn’t offer him coming out of Sweet Grass High School in Big Timber.

Robby, who’s 5-10 and 185 pounds, went to Northern Arizona out of Del Norte High School in California to play for former Griz assistant coach Jerome Souers in 2017. When Bobby Hauck was hired by UM in December 2017, Robby transferred after a redshirt season and got an NCAA waiver to play immediately for his father.

Bobby, a former UM track athlete, was a grad assistant for the Griz under Don Read when Tim was playing. He passed Read as UM’s all-time winningest coach in 2018 and reached 100 career wins at UM this season.

“They’re both outstanding tacklers, especially in open space,” Bobby said. “Both of them are really smart players, understand the scheme, understand what offenses are trying to do. And then both of them are great teammates. So, yeah, I think there’s some similarities.”

Strong safety Vince Huntsberger unofficially holds the school record of 469 tackles from 1998-2001. However, Huntsberger officially is second in school history with 393 because of the NCAA’s policy for postseason stats while he was playing.

For now, the focus and celebration will be on Robby passing Tim, who's expected to be in attendance for the game. It might even lead to some friendly smack talk at future family gatherings.

“It’ll be fun. We’re not only family members, we’re friends, so there’ll be some banter about that, I’m sure,” Bobby said, before jokingly adding: “He’s only got 300 more than me.”

The Grizzlies hosted Southern Utah in Missoula. Here's what you may have missed from the ninth week of their season.

The Montana Grizzlies (5-2) are hosting Southern Utah (1-7) in the Thunderbirds' final trip to Missoula as a member of the Big Sky Conference.