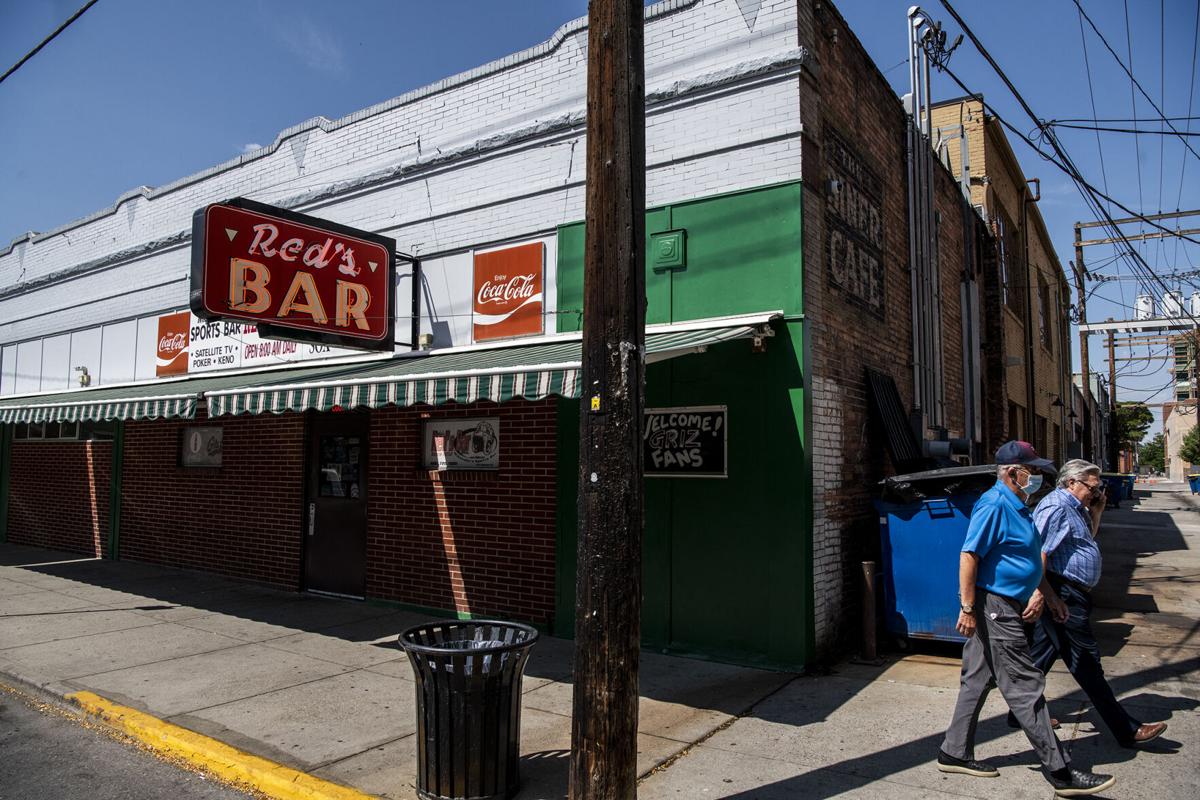 Red's Bar is one of Missoula's go-to spots for Griz football fans. Owner Mike Helean said the loss of the football season will have a huge impact on revenue. Out-of-town visitors bring in about $2.53 million in revenue to the local economy, according to a 2017 study by the Bureau of Business and Economic Research at the University of Montana. 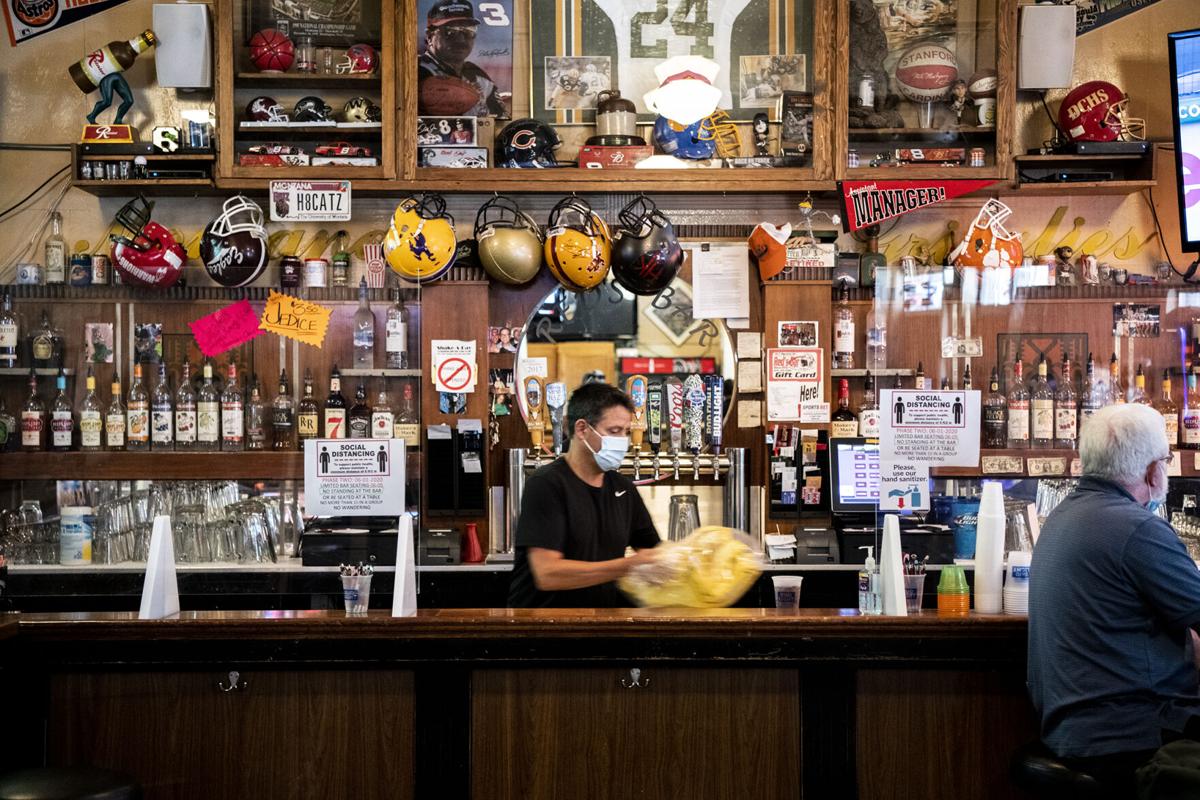 Von Richter has worked as a bartender at Red's for 24 years. The bar begins hiring new staff come football season, though summertime staffing may stay the same without a Griz football season, according to owner Mike Helean.

Red's Bar is one of Missoula's go-to spots for Griz football fans. Owner Mike Helean said the loss of the football season will have a huge impact on revenue. Out-of-town visitors bring in about $2.53 million in revenue to the local economy, according to a 2017 study by the Bureau of Business and Economic Research at the University of Montana.

Von Richter has worked as a bartender at Red's for 24 years. The bar begins hiring new staff come football season, though summertime staffing may stay the same without a Griz football season, according to owner Mike Helean.

The loss of a University of Montana football season would be a crushing blow to the Missoula economy if it happens. There was no official confirmation as of Thursday afternoon that the Big Sky Conference voted to delay the season until spring due to the coronavirus, but two college sports reporters tweeted the news on Thursday, citing unnamed sources.

The money that fans spend in town during home football games helps single mothers pay rent or buy school shoes for their kids. It helps businesses pay property taxes, which goes to the city for street repair and to school districts.

"It's pretty heartbreaking," explained Luke Laslovich, the general manager of the Campus Inn near the Washington-Grizzly Stadium. "Those five home games represent half of our last few months of earnings. Basically, three-fourths of our staff will lose their jobs. It's sad. We have quite a few folks who, the Griz games are a major part of why they're able to survive and live in Missoula."

A 2017 study by the Bureau of Business and Economic Research at UM found that out-of-town visitors spend about $2.53 million, excluding airfare, in Missoula County for each home football contest. Grizzly athletics produce 1,384 permanent jobs in a variety of industries, $120.8 million in gross annual sales for area businesses and $52.8 million in wages and benefits.

Laslovich said all hotels and motels will be impacted, so it's not like the workers out of jobs at his hotel can just go find another job elsewhere because nobody will be hiring until next spring and summer when the tourist season picks up again.

"None of us are high wage earners that can weather the storm," he explained. "We have 18 employees right now, and I'm going to have to cut that down to right around five."

Mike Helean has owned Red's Bar in downtown Missoula for 28 years, and it's one of the go-to spots for Griz fans.

"It's a huge deal," he said, when asked how the loss of the football season will affect his business. "It will absolutely impact us greatly. It's definitely affected hiring practices. Towards the end of summer, we start hiring a few new people because we're so busy in the fall. But if we don't have football or if students don't come back for the fall, I will probably keep the staff normal for summertime."

Helean said the fall season is the busiest time of year at Red's, and out-of-town fans are a big part of that. They come from as far away as Billings and Seattle.

"It's a tough pill to swallow, but I'm sure we'll get through it," he said.

Nearly 170,000 people attended Griz football games in 2015, with 90,0000 of those traveling from outside of Missoula. About 9,500 people from out of town came for Griz basketball games, and another 8,200 traveled here for Lady Griz basketball games. Total nonresident spending by those attending those three sports totaled $30.7 million, including airfare.

Griz football visitors spend an average of 1.98 nights in Missoula, and the average group size of 2.7 people spends an average of $200 a day while here.

“We’ve known anecdotally that Griz athletics must have an impact on the economy of Missoula,” said UM athletic director Kent Haslam in 2017. “We have 26,000 people at a football game, so we figured it was significant. But I was surprised that the economic impact was as large as it was.”

In the 2016 fiscal year, the UM Athletic Department’s budget was $22.9 million. It paid out $6.6 million in employee compensation and provided $4.4 million worth of scholarships, fellowships and tuition waivers. The department spent $10.3 million on construction, equipment and other vendors and brought in about $700,000 from visiting teams and officials for all Griz athletic home events.

The 343 varsity student athletes spent $5.5 million on housing, food and other expenses in Missoula in the 2016 fiscal year.

The UM study found that without Griz sports, there would be 1,334 fewer people here and $44.9 million less in disposable after-tax income. The $120.8 million in spending from out-of-town visitors for sports events covers everything from groceries to auto repair, but was dominated by accommodations, food, retail goods and entertainment.

Laslovich, the general manager at Campus Inn, said there are intangible losses as well.

"Year to year, the same people come to games," he said. "Lots of them are player's families and alumni. It's just a part of their fall to come enjoy Missoula, and staying with us is just one part of what they do. It's sad to see those things maybe not happening across the board and all the other things that are fun for people to enjoy that support the economy. It's sad to see that in jeopardy."

The Big Sky wants to hear from the NCAA's Board of Governors before deciding the fate of its fall sports next week.

Jeff Welsch: Fires show we can unify against COVID-19 to save lives — and basketball