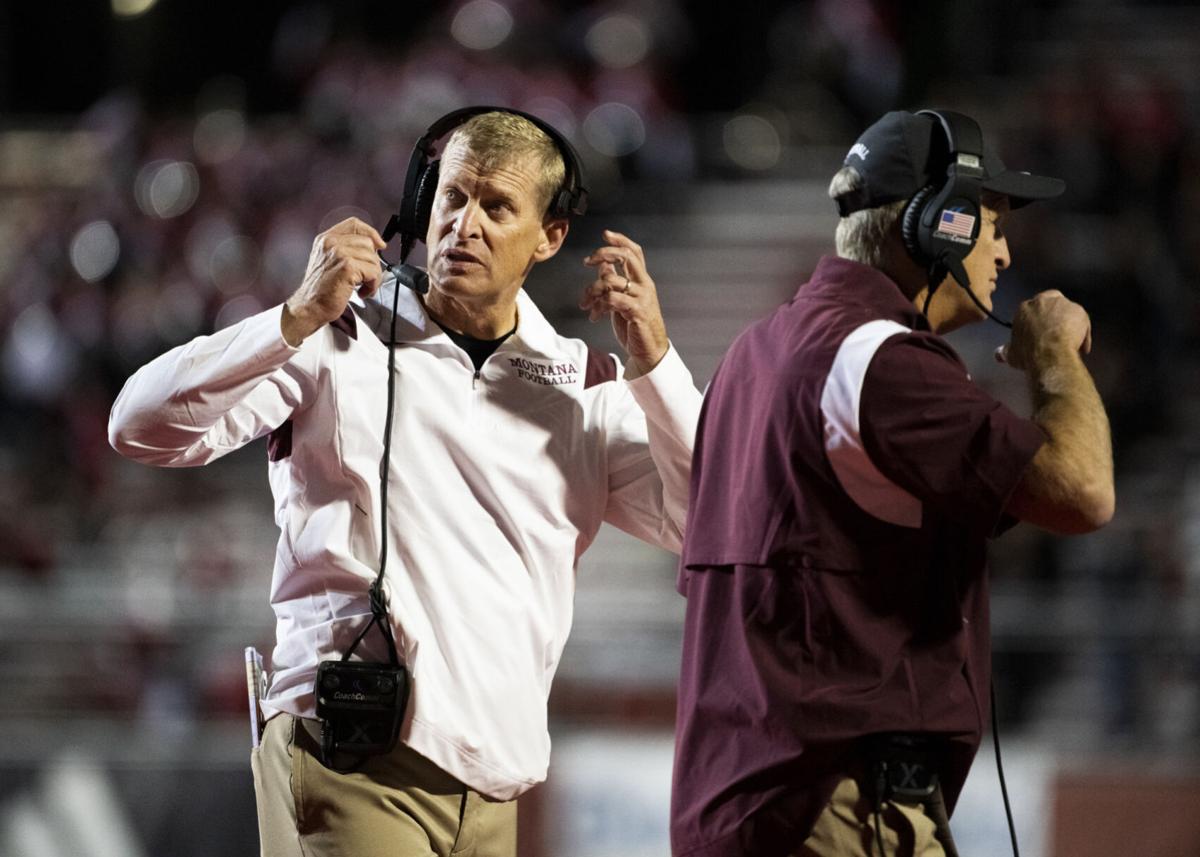 Montana head coach Bobby Hauck, left, looks on during the college football game between the Griz and Eastern Washington on Saturday at Roos Field in Cheney, Washington. 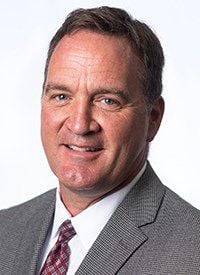 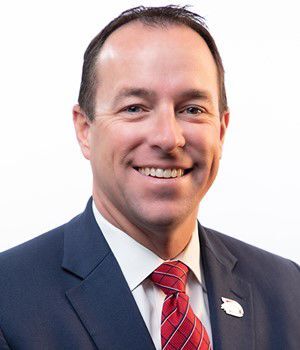 MISSOULA — As Montana athletic director Kent Haslam recalls, it was just a matter of minutes after he heard that Dixie State was moving up to Division I that he reached out to his counterpart at the Utah-based university, Jason Boothe.

There’s a lack of non-Big Sky FCS teams in the western United States, so Haslam was keen to start a conversation about setting up football games between the schools. They settled on a four-game series, the first of which is 1 p.m. Saturday at Washington-Grizzly Stadium.

“Being a non-conference FCS opponent out west is probably the equivalent of being the ice cream truck at a Little League field,” Haslam said. “You’re going to be really popular.”

Montana leaped at the chance to play Dixie State because those games fill several of its scheduling goals. The ability to get DSU to come to Missoula aids the Griz in fulfilling their preference of at least six home games each season.

Then there are considerations of dates matching up, travel required, and whether the opposing team is looking for a home or away game and for an FCS or FBS opponent.

Those factors were similar when UM scheduled North Alabama, a transitioning team, for 2019.

Specifically with Dixie State, it’s beneficial that the school is out west, is in an area that UM is familiar with and is in the same time zone. That makes travel easier, so UM will head down to Dixie State as part of the agreement.

“We’d have probably done six if we could,” Haslam said with a laugh. “It really was just as simple as the dates matching up.”

He’s hoping to create some history with Dixie State through the series. Growing up in Utah, Haslam knows about DSU’s success of winning junior college national titles before moving up to Division II in 2006, playing in the GNAC from 2008-16 and in the RMAC from 2017-19.

“There’s no guarantee you’re going to get a win. That’s for sure. You go into it wanting Division I games,” he said. "That’s what I would hope is that we can have a long-term relationship where we can be doing home-and-homes and be playing each other.”

There are few FCS teams in the west outside of the Big Sky, leaving conference teams with few chances for non-league FCS games anywhere close to them. A primary one has been San Diego.

The four Dakota schools are also nearby options. North Dakota became eligible when it left for the MVFC in 2018. UM has a home-and-home series scheduled with UND for 2024 and 2025.

Southern Utah will become another option when it leaves the Big Sky for the WAC starting in July 2022. UM hasn’t been able to work out any games with them yet, Haslam said.

The addition of Tarleton State (Texas) and St. Thomas (Minnesota) to the FCS in 2021 and Texas A&M Commerce in 2022 could give UM more scheduling options. The amount of travel could factor into UM choosing whether to play those teams, Haslam noted, as well as the fact they’re directly moving into a conference instead of beginning as an independent like Dixie State, meaning they have fewer open dates for games.

At least the Griz got some dates with Dixie State on the horizon before those were gone.

“They’re going to be a prime target for all these schools out in the Big Sky that need out-of-conference, non-conference opponents,” Haslam said.

Boothe had to fill 11 games each season when Dixie State became a D-I independent in 2020, so it was a pleasant surprise when UM reached out and became one of the first opponents.

While Big Sky teams like UM are excited to have another non-conference opponent out west, the fact that the Big Sky is the only league in the area means DSU might be seeing them a lot. This year’s schedule includes four teams from the Big Sky.

“As an independent, we didn’t really have much choice, but our coach is awesome about saying, ‘It doesn’t matter, let’s go play anybody, any day, anywhere, anytime,’” Boothe said. “I’m like, ‘Good, because that’s what we’re going to have to do to get a schedule together.’”

Filling an 11-game schedule on its own wasn’t the worst thing financially because DSU could get money from FCS guarantee games, which it wouldn’t for league games. FBS teams won’t play DSU until 2022 because an FBS team can only count an FCS win for bowl eligibility if the FCS team has been offering 90% of the maximum FCS scholarships for at least two straight years.

DSU realized it wasn’t far off financially from making the move to D-I when it got an invite. In addition to the guarantee money, DSU is helped by increases in student fees, enrollment and ticket sales. Boothe also noted the games against Sacramento State and Weber State this fall drew 6,600 and 8,200 fans, the two largest in DSU history after averaging 3,000 in the past.

DSU had been the lone public D-II team in the state but can have rivalries with in-state teams because it’ll count as a D-I game for all teams. Being D-I also makes travel easier because of close proximity to opponents and can lead to more media coverage, which may aid enrollment.

“As a transitioning school, we’re looking for as much money as we can possibly make just to start to build a program, knowing it’ll come with very good opponents,” Boothe said.

The first thing DSU has focused on for its financial increases was scholarships because it would give the Trailblazers the best chance of being competitive. DSU was offering just 32 at the D-II level and increased that to the FCS allotment of 63 last year but ending up offering 59.5.

DSU will focus on increasing coaching salaries and the higher number of coaching spots allowed in D-I. Other focuses will also be about putting more money into football recruiting and operational budgets. DSU is even able to afford to charter flights for the first time this year.

“Now, are we going to be up there with the Montanas right away? No, not even close,” Boothe said. “But we’re going to be able to be competitive and put teams out there and slowly build it within our means to grow it smartly.”

DSU decided to accept a football invitation to the WAC, an unexpected move when the old FBS conference was resurrected as an FCS league this year in an alliance with the ASUN. The WAC’s decision to begin play in 2021 instead of 2022 meant DSU might lose $1 million in guaranteed game money this year if it had to cancel non-conference games to play a league schedule.

Boothe and the WAC worked to where DSU would play only three WAC games this year and remain an independent before becoming a full member next year. The 2022 season is more of a challenge because of the higher number of conference games, so Boothe has worked to find other schools to take the previously scheduled games off their hands.

“We just did too good of a job of getting an infinite schedule together and now we have to backtrack and go the other way and try not to spend a lot of money on cancellations,” he said.

UM and DSU haven’t had to cancel any of their games but did change this year’s game from Sept. 25 to Oct. 9. After the series was scheduled in 2019, the Big Sky moved its canceled 2020 conference season because of the pandemic to 2021, and UM had to host Cal Poly on Sept. 25.

Dixie State could have a new name at some point in the series. The school’s board of trustees voted to change the school’s name to Utah Tech. The process has moved on to the state board of higher education, and the legislature still has to act on it, Boothe said.

Neither Haslam nor Boothe believe a name change will void the game contracts. Haslam equated it to a scheduled game staying on the books even if one of the school’s athletic directors who signed the contract moved on to another school before the game was played. Boothe said if anything there might just be an addendum added noting the change.

Whatever name the Trailblazers go by when they face UM over the years, Boothe is hoping they gain experience that’ll help them when they’re eligible for the playoffs beginning in 2024. He’d also like to win at least one game against the Griz.

“Even if we don’t win any of those games, if we’re given the opportunity to be fortunate enough to get to the playoffs, the team will know what it’s like to play in front of a big crowd and in a pressure situation against a good team,” he said. “We’ll have built towards that by playing the best.”