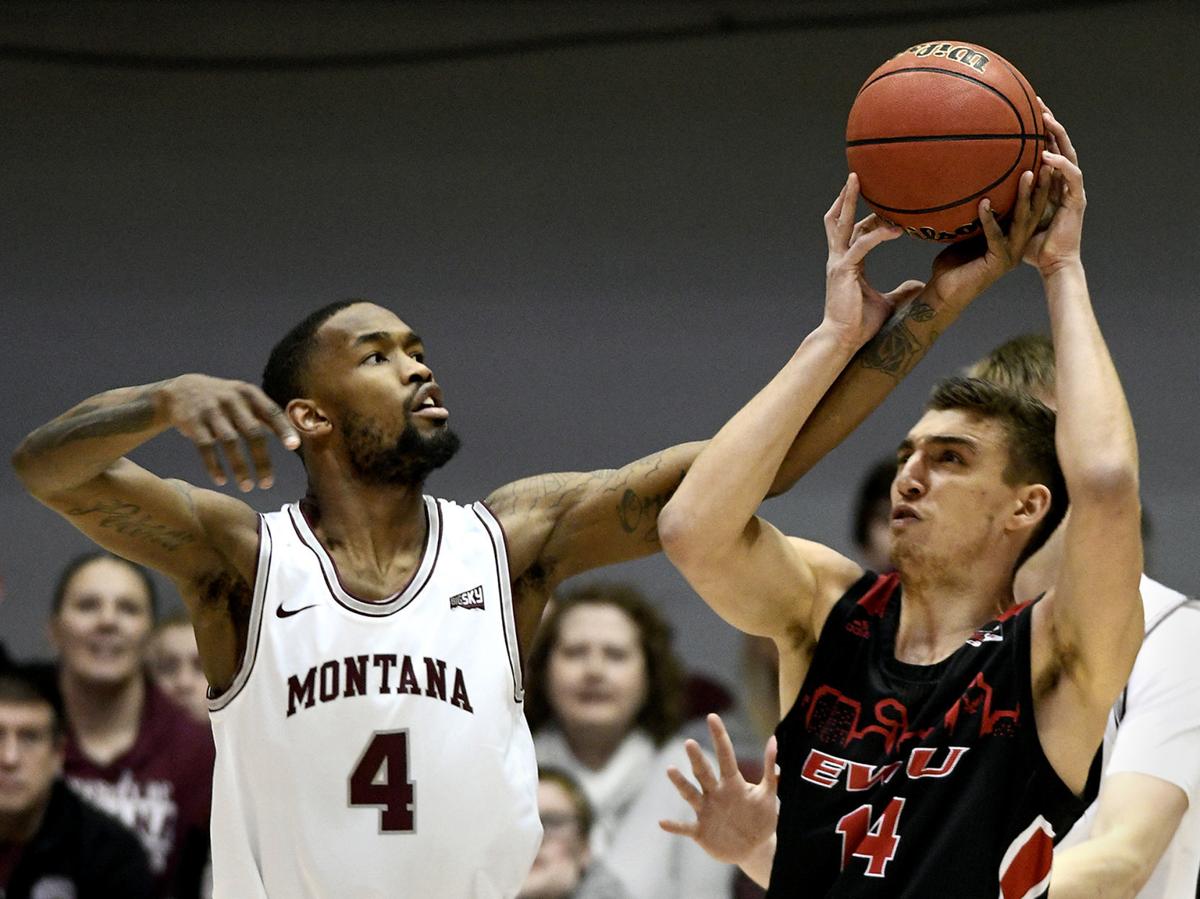 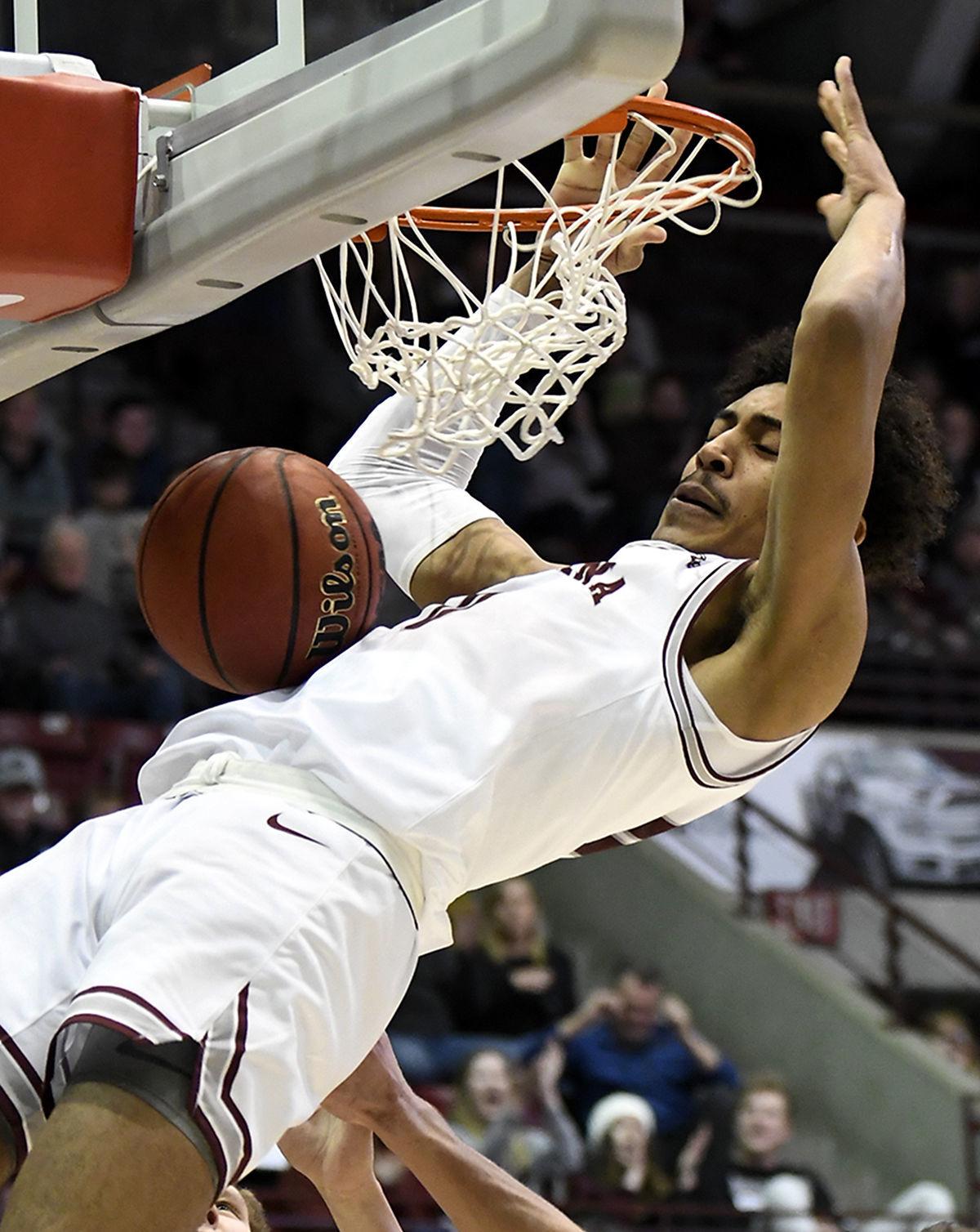 Montana's Kyle Owens dunks the ball near the end of the first half. Owens received a technical foul for hanging on the rim.

Montana's Kyle Owens dunks the ball near the end of the first half. Owens received a technical foul for hanging on the rim.

MISSOULA —  It was scrappy, it was full of technical fouls and it was everything an Eastern Washington and Montana men’s basketball game has been over the past few seasons.

A Montana cheerleader was even ejected in a game that ended with 55 total fouls and six technicals as the Grizzlies won 92-82.

“We know when we play Eastern there’s going to be some of that and we’re going to have to play through it,” Montana head coach Travis DeCuire said. “I would like for it not to be a double tech and for it to be one way. We got to manage that a little better.

“But it’s kinda what comes with that game and I thought we did a good job of not losing composure as a unit.”

The fouls made the game choppy and there were several moments where it looked as if the Grizzlies might cough up the lead down the stretch, but a personal 7-0 Kendal Manuel run a bit under the 10-minute mark in the second half helped Montana extend a hot burst out of the locker room.

That was important, because with nine minutes left in regulation all four of the posts Montana uses most frequently — Jared Samuelson, Kyle Owens, Mack Anderson and DJ Carter-Hollinger — all had four fouls.

Samuelson and Owens each fouled out over the next few minutes of play, leaving the Grizzlies in a tough spot. It was made worse when Timmy Falls fouled out after a double technical foul with Eastern Washington’s Kim Aiken Jr. with 5:53 left in the second half and the Grizzlies up by 13 points.

“It’s becoming part of the game plan, we’re used to everybody being in foul trouble,” DeCuire said. “We had three starters sitting going down the stretch in the first half, we’ve got a lead we’re trying to hang on to and it’s blown, but our bench keeps getting better and keeps getting stronger.”

Montana got off to a torrid start, hitting a cluster of shots — including 3-pointers from Falls and Samuelson — on the way to a 21-10 lead. It was the largest lead of the first half for either team as Eastern Washington shook of the slow start and found its rhythm midway through the period.

Jacob Davison was the catalyst for several Eagle runs that kept Eastern Washington in the game and finished with a game-high 34 points.

“It was a fun one to be a part of and obviously it didn’t come out how we hoped, but it was definitely fun to be a part of,” Davison said. “It was gonna be a high-intensity game when we got here and it was fun, but it sucks the outcome we got.”

The two teams combined for 25 fouls in the first half alone of the tense, fervent affair. Four players fouled out, including Montana’s Falls, Samuelson and Owens. Kim Aiken Jr. also fouled out for Eastern Washington.

Aiken Jr. was also involved in the play that saw the Montana cheerleader ejected near the student section on the north end of the court. Late in the game Sayeed Pridgett and Aiken Jr. were tied up after Pridgett pulled down a defensive rebound. Aiken Jr. was called for a common foul. At that point, according to a fan who was on that end of the court, a male cheerleader who was near the play was then ejected and taken off the court by security with Montana athletic director Kent Haslam also in the area.

Eastern Washington head coach Shantay Legans did not see the play, but did comment on it following the game.

“One of my players said he fell into the crowd and the cheerleader pushed him, I don’t know,” Legans said. “I didn’t see it … I’ll have to see the film, I have no idea what happened. The referee said there was some pushing and they kicked the people out.”

Montana was able to finish out the game with eight straight free throws, two each from Josh Vazquez and Pridgett as well as four from Manuel.

Pridgett finished with 24 points and passed Wayne Tinkle for ninth on the school's all-time men’s basketball scoring list. Manuel scored 18 and was 3 of 4 from behind the 3-point arc.

Montana now has sole possession of the conference lead with a 9-3 record in Big Sky play, while Eastern Washington fell to 8-3.

“This is what it’s about,” DeCuire said. “Not only just enjoying the preparation, and my portion for getting up and going through my day in preparing for it, but watching these young kids enjoy the moment. I don’t know there’s any environment better than college basketball.”

Saturday night, as Montana and Montana State worked through the first few minutes of the second half in the 300th Cat-Griz men’s basketball ga…