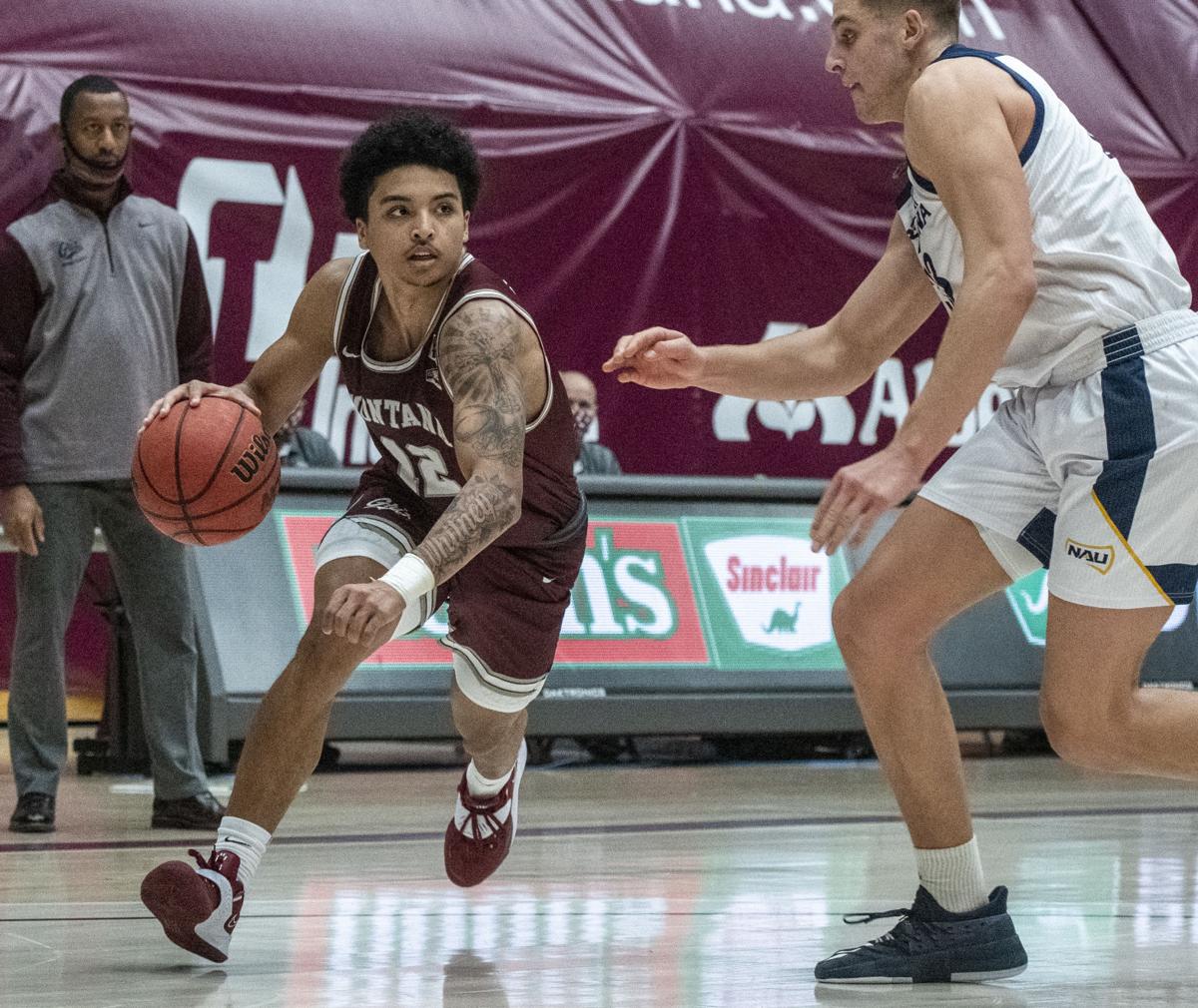 Montana's Brandon Whitney dribbles the ball in the Grizzlies' game against Northern Arizona on Saturday at Dahlberg Arena. Whitney scored a career-high 22 points on 11 shots, but UM blew a 17-point lead in the 62-58 loss. 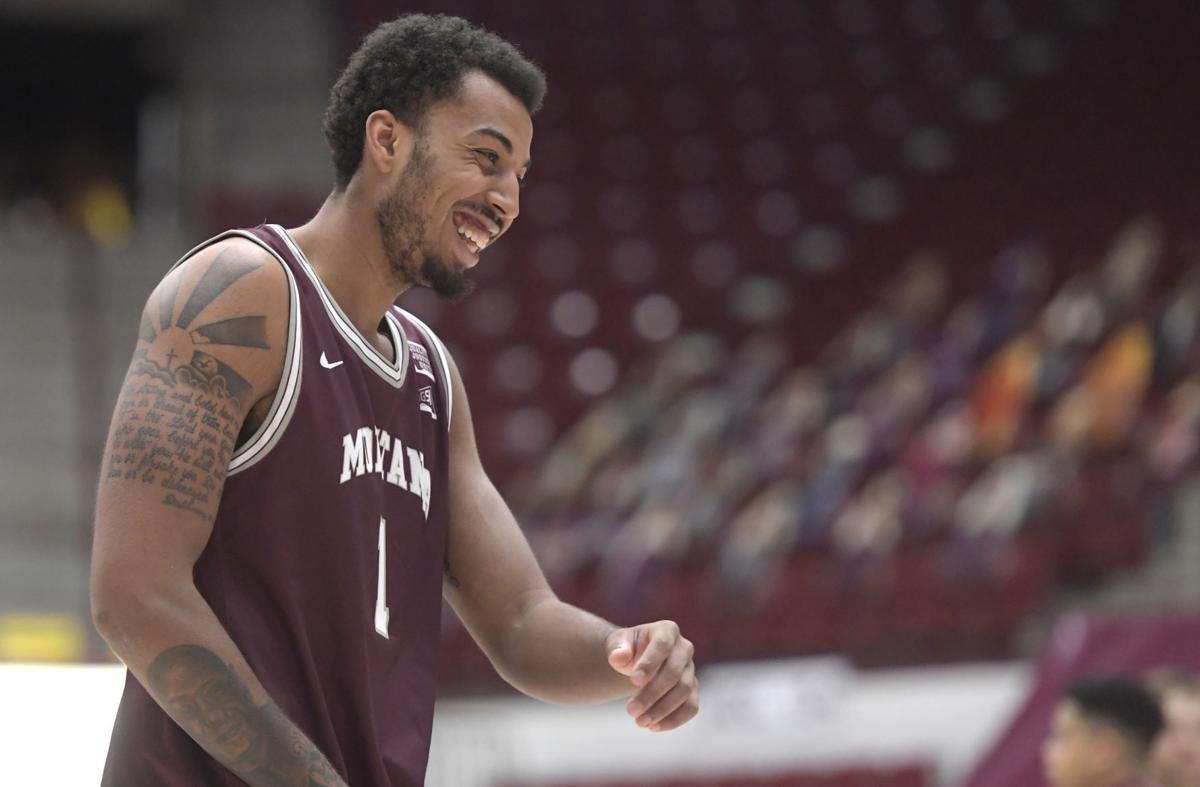 Montana forward Michael Steadman smiles during the Grizzlies' game against Northern Arizona on Saturday at Dahlberg Arena. UM allowed the Lumberjacks to close the game on a 12-0 run in a 62-58 loss. 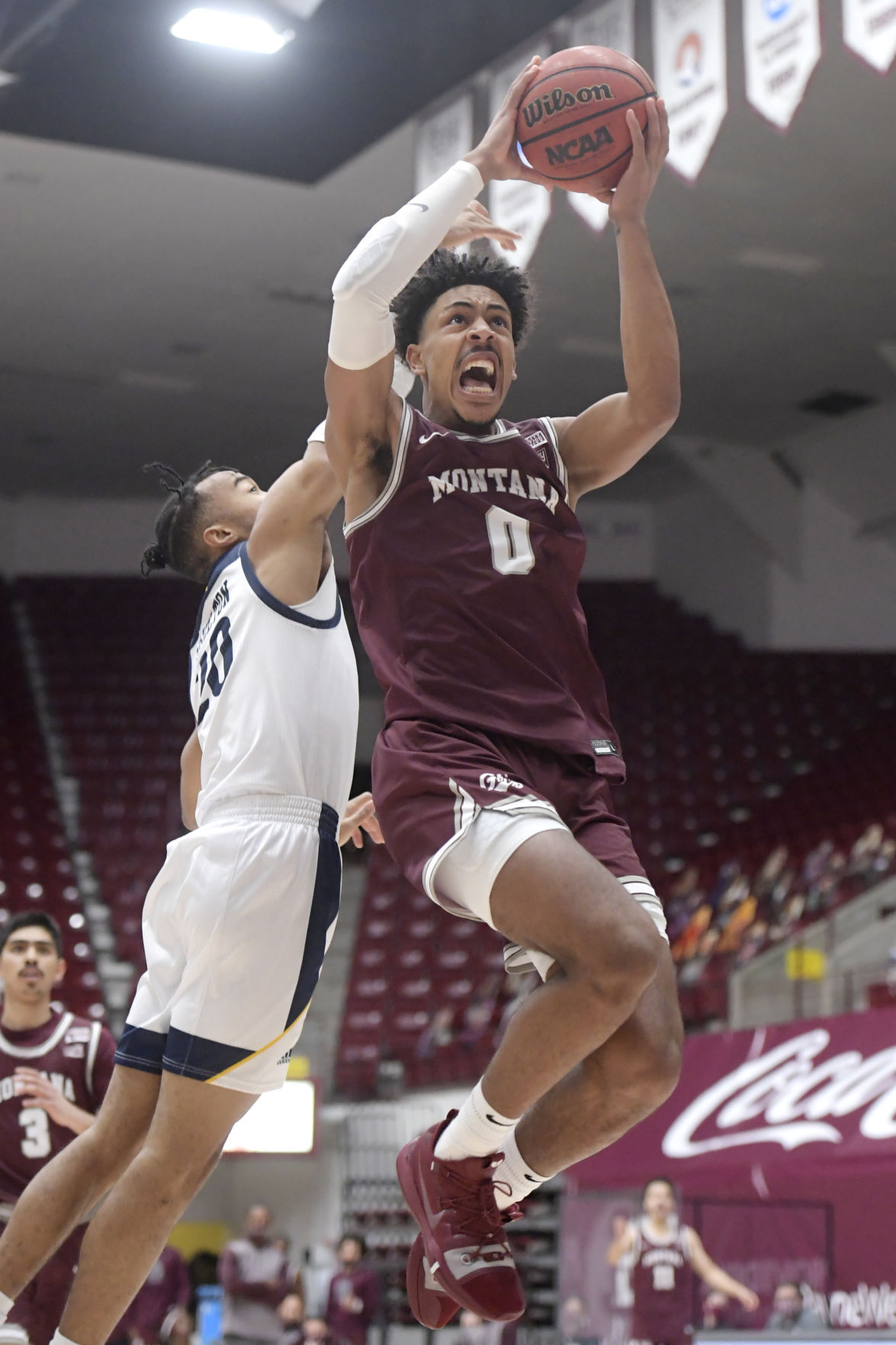 Montana forward Kyle Owens drives for a layup against Northern Arizona on Saturday at Dahlberg Arena. The Griz lost to the Lumberjacks, 62-58, two days after beating them in their first meeting.

Montana's Brandon Whitney dribbles the ball in the Grizzlies' game against Northern Arizona on Saturday at Dahlberg Arena. Whitney scored a career-high 22 points on 11 shots, but UM blew a 17-point lead in the 62-58 loss.

Montana forward Michael Steadman smiles during the Grizzlies' game against Northern Arizona on Saturday at Dahlberg Arena. UM allowed the Lumberjacks to close the game on a 12-0 run in a 62-58 loss.

Montana forward Kyle Owens drives for a layup against Northern Arizona on Saturday at Dahlberg Arena. The Griz lost to the Lumberjacks, 62-58, two days after beating them in their first meeting.

MISSOULA — Over the final five minutes and 31 seconds of Montana's 62-58 loss to Northern Arizona on Saturday at Dahlberg Arena, the Grizzlies did not score a point.

UM's last seven possessions included two turnovers and 0-of-5 shooting from the field. Montana had just two offensive rebounds in the game — one in each half and none in the final 11 minutes of the contest.

Scoreless stretches have become commonplace this year for UM. The Grizzlies have only reached the 70-point mark once this year against a Division I team.

Northern Arizona ended the game on a 12-0 run.

"At the end of the day, you just got to have more energy and and be more aggressive down the stretch," UM head coach Travis DeCuire said. "We're not there right now."

Then, however, came the first of two runs by Northern Arizona.

Lumberjacks guard Cameron Shelton had 11 of his 15 points after halftime and helped key a 12-2 spurt that got NAU back in the game. Shelton's layup with 11:16 left capped the run and brought the Lumberjacks within a point. That was answered with a flurry of 3-pointers by Montana guards Josh Vazquez and Brandon Whitney.

"We made a couple mistakes here and there where we turn the ball over or maybe didn't take the shot we really wanted or maybe didn't get a rebound when we should have," DeCuire said. "And that was taking the life out of us, and we've got to find ways to get through that."

As the season has progressed, Montana has steadfastly remained committed to running through long possessions in its half-court offense. According to KenPom.com, UM averages 18.4 seconds per offensive possession, which is 307th out of 347 NCAA Division I teams.

"Yeah, definitely, but we just want to get the best shot that we can at the end of the day," Griz point guard Brandon Whitney said when asked if they wanted to get shots off earlier in possessions. "If it has to take that long, then it does, but we would rather get it earlier in the shot clock."

There are two things at play with that statistic. First, Montana does not fly out into transition and has had very few long outlet passes following defensive rebounds this season. The Grizzlies have had 32 fast-break points in 10 games against Division I opponents this year. In those same games, their opponents have scored 100 points in transition.

Second, it takes the Grizzlies a very long time to run through their half-court sets and settle on a shot. This slows the game down immensely and can work if shots are going down at a high percentage.

That's important because the overall result from this style of play is fewer offensive possessions. Montana also turns the ball over at a fairly high rate (14.5 turnovers per game) and does not take very many 3-pointers, meaning its margin for missing shots and making mistakes is very small.

The only way the Grizzlies have been able to steal back possessions and points is on the back of their strong free-throw shooting and stingy defense.

"I'm not worried about the time of possession, I'd like to be faster and getting quicker shots, but that's hard to do when someone's doubling and you want to throw the ball into the post when they're helping on penetration," DeCuire said. "When you play off of penetration, you don't know if it's one, two, three, four, five passes before someone comes open.

"So yeah, you'd like to see it, but you just don't know when it is, and as a young team, you got to be willing to play with some patience when necessary."

For a program that has consistently been at the top of the conference and to lose players like Sayeed Pridgett and Kendal Manuel, regression perhaps should have been expected.

Even so, both the coaches and media picked UM near the top of the preseason Big Sky polls. Grizzly big man Michael Steadman was a preseason all-conference player.

But reality is starting to set in. The loss dropped the Grizzlies to 2-4 in Big Sky play, and they will head into a two-game series with Sacramento State on the road after splitting their home series against Northern Colorado and Northern Arizona.

Montana has the ability and the players to turn the season around, and the Griz are not far away. Their four Big Sky losses have come by a combined eight points, and there would be a very different perception of the team had they won even two of those.

Those losses, however, have all had similar themes of blown leads and a failure to close out teams late in games. Until Montana figures out those issues, close games — where the margins are razor thin and a young team still figuring each other out is at a disadvantage — will continue.

"You got to have some success," DeCuire said. "And as you do that, you start to have more confidence."