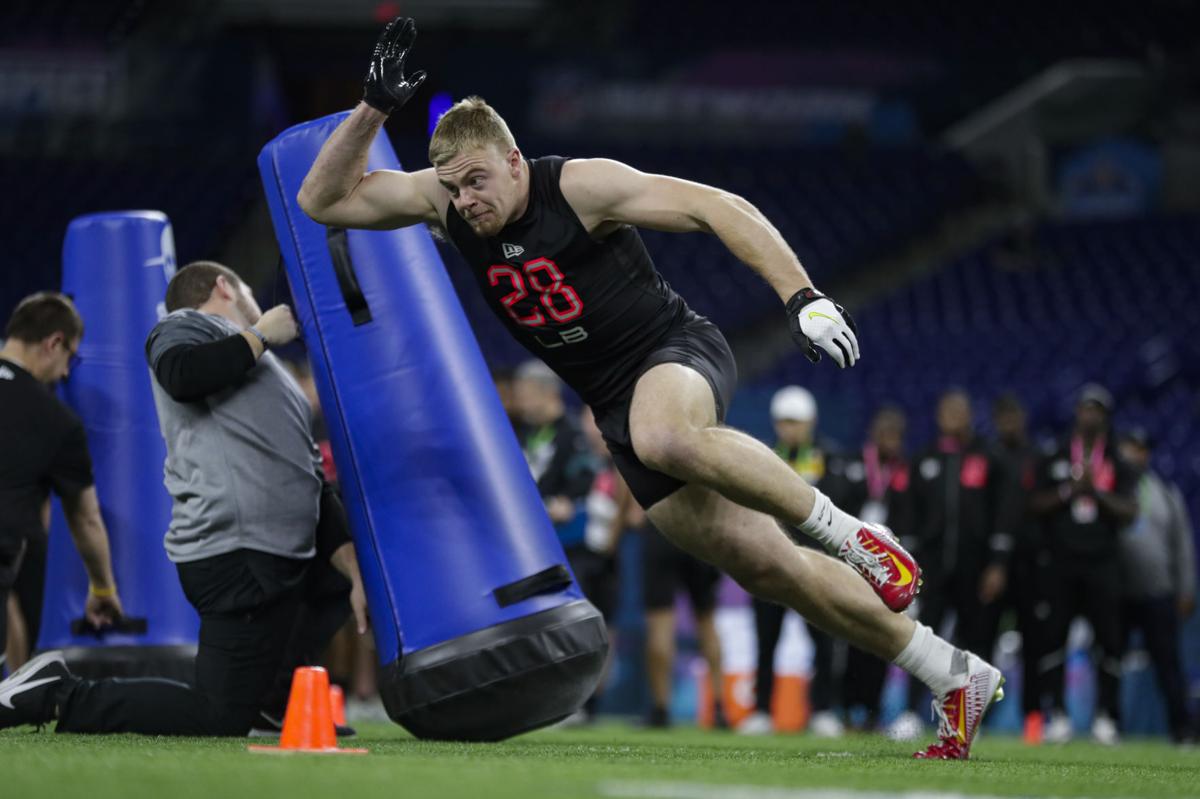 Montana linebacker Dante Olson runs a drill at the NFL Combine on Feb. 29 in Indianapolis. Olson was waived by the Philadelphia Eagles on Wednesday after having signed with them as an undrafted free agent in April. 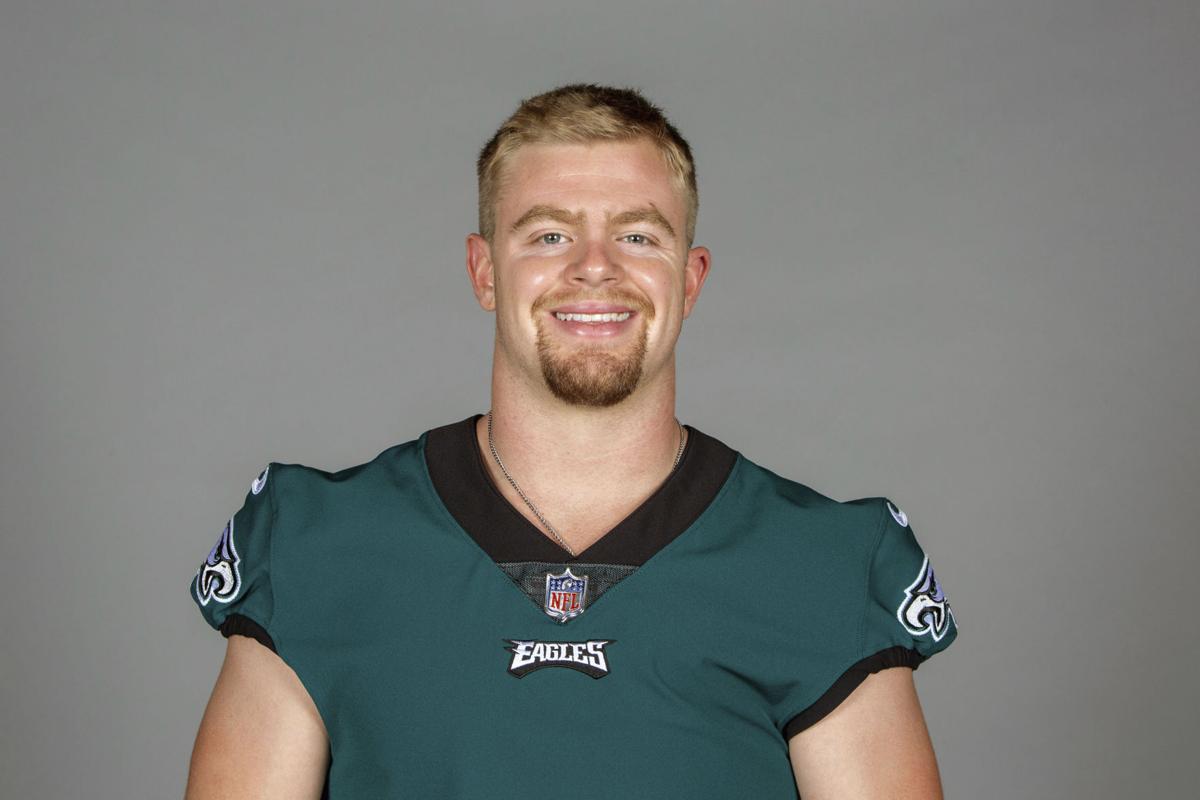 MISSOULA — Former Montana linebacker Dante Olson may have to find somewhere other than Philadelphia if he wants to live out his NFL dream.

Olson, the 2019 Buck Buchanan Award winner as the top FCS defensive player, was waived by the Eagles on Wednesday morning, the team announced.

It was believed to be a challenging climb for Olson to make the active roster for the season because he signed as an undrafted free agent following the 2020 NFL Draft and because there aren't the regular four preseason games for players to prove they belong. However, he had joined a team that was weak at the linebacker position and had former Griz players or coaches on its staff in safeties coach Tim Hauck, senior offensive consultant Marty Mornhinweg and linebackers coach Ken Flajole.

Olson, a native of Medford, Oregon, has overcome adversity before. He was cut from his high school varsity team as a freshman and didn't earn starting time at Montana until his redshirt junior season, when head coach Bobby Hauck returned to Missoula to replace former coach Bob Stitt.

Olson, a two-year starter with the Griz, left with the school record for career tackles (393) and the school and conference records for single-season tackles (179). The 6-foot-2, 237-pound inside linebacker finished his career as the 2019 Big Sky defensive player of the year.

Olson, a consensus All-American his senior season, had been the only former Griz player on an NFL roster before he was waived. He signed a three-year contract worth $2,285,000 with $10,000 in guaranteed money and no signing bonus, according to OverTheCap.com and Spotrac.com.

Montana was ranked No. 7 in the STATS Perform FCS Top 25 preseason poll, which was released Tuesday. The Griz were one of five ranked teams from the Big Sky Conference, which tied with the Missouri Valley Football Conference for the most teams in the poll.

North Dakota State, which has won eight of the past nine FCS titles, received all 147 first-place votes. The poll was voted on with the intention to reflect what the rankings were projected to be following the 2020 season, assuming it was played as scheduled back in March before the coronavirus pandemic hit.

In addition to the team recognition, several Grizzlies racked up preseason awards in recent weeks.

Senior wide receiver Samori Toure was named to the Senior Bowl Watch List as the lone Big Sky representative on the 250-player list of the top draft-eligible seniors in all levels of college football. He's coming off a year in which he set single-season school records for receptions (87) and receiving yards (1,495).

Senior long snapper Matthew O'Donoghue was one of 20 FCS and FBS players to land on Special Teams U All-American Watch List. He logged zero bad snaps in 144 attempts during the 2019 season, his third year as a starter.

Montana junior running back Marcus Knight was named the best FCS player currently wearing jersey No. 21 by HERO Sports. Senior wide receiver Sammy Akem and junior safety Robby Hauck got the same recognition as the best players wearing No. 18 and No. 17, respectively. They joined senior left tackle Conlan Beaver (No. 78) and senior linebacker Jace Lewis (No. 34) on the list.

Knight, the 2019 Big Sky newcomer of the year, set single-season school records for rushing touchdowns (23), total touchdowns (25) and points scored (150) during his first year at UM after transferring from junior college.

Akem ranks in the top 20 in school history for career receiving yards (1,934), receptions (136) and touchdown catches (20). Hauck tallied 129 tackles last season, tied for the fifth most in a single season in school history.

Montana's online football roster has been updated as students reported to campus for the start of the fall semester. Eight walk-on players who hadn't been previously listed on the roster now appear online, and all incoming players since December now have jersey numbers.

Among the newly listed walk-ons, Hunter Allen is a redshirt junior cornerback who began his career as a wide receiver at Arizona State and spent the past two years at San Diego Mesa Community College. Jack Cooper is a redshirt junior kicker/punter who began as a walk-on at Ole Miss but didn't play there over two seasons and transferred to Fresno City College for 2019. Max Gardiner is a junior wide receiver who played baseball at Linfield College in Oregon the past two years. Ryan Ressler is a redshirt freshman cornerback from Colorado who tried out during spring camp.

Two players who had previously committed aren't listed on the roster. Peyton Brammer, a 3-star tight end from Washington, said he's still planning to grayshirt this fall as he recovers from an injury and will officially enroll at UM and join the team in the spring semester. Washington State defensive end transfer Beau Braden, who had committed in the spring, didn't respond to a request for comment.

No player is listed as the next recipient of the No. 37 legacy jersey following the graduation of defensive tackle Jesse Sims.

Montana linebacker Dante Olson is heading to the Philadelphia Eagles to join a pair of former Grizzlies who are now on the coaching staff.