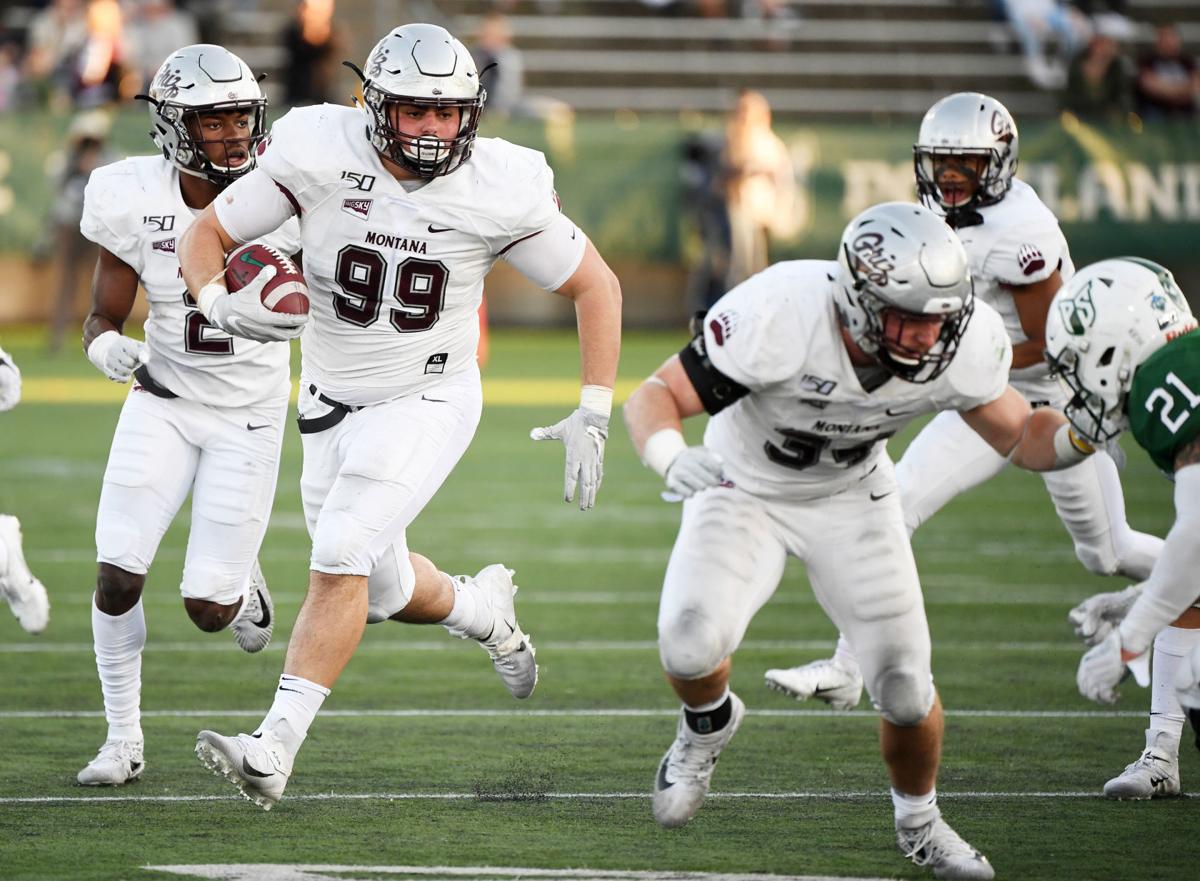 Montana's Alex Gubner runs with the ball after pulling down an interception in the fourth quarter of the Grizzlies' 38-23 win over Portland State on Saturday in Hillsboro, Oregon. The 6-foot-3, 285-pound redshirt freshman defensive lineman leads Montana with three interceptions this season. 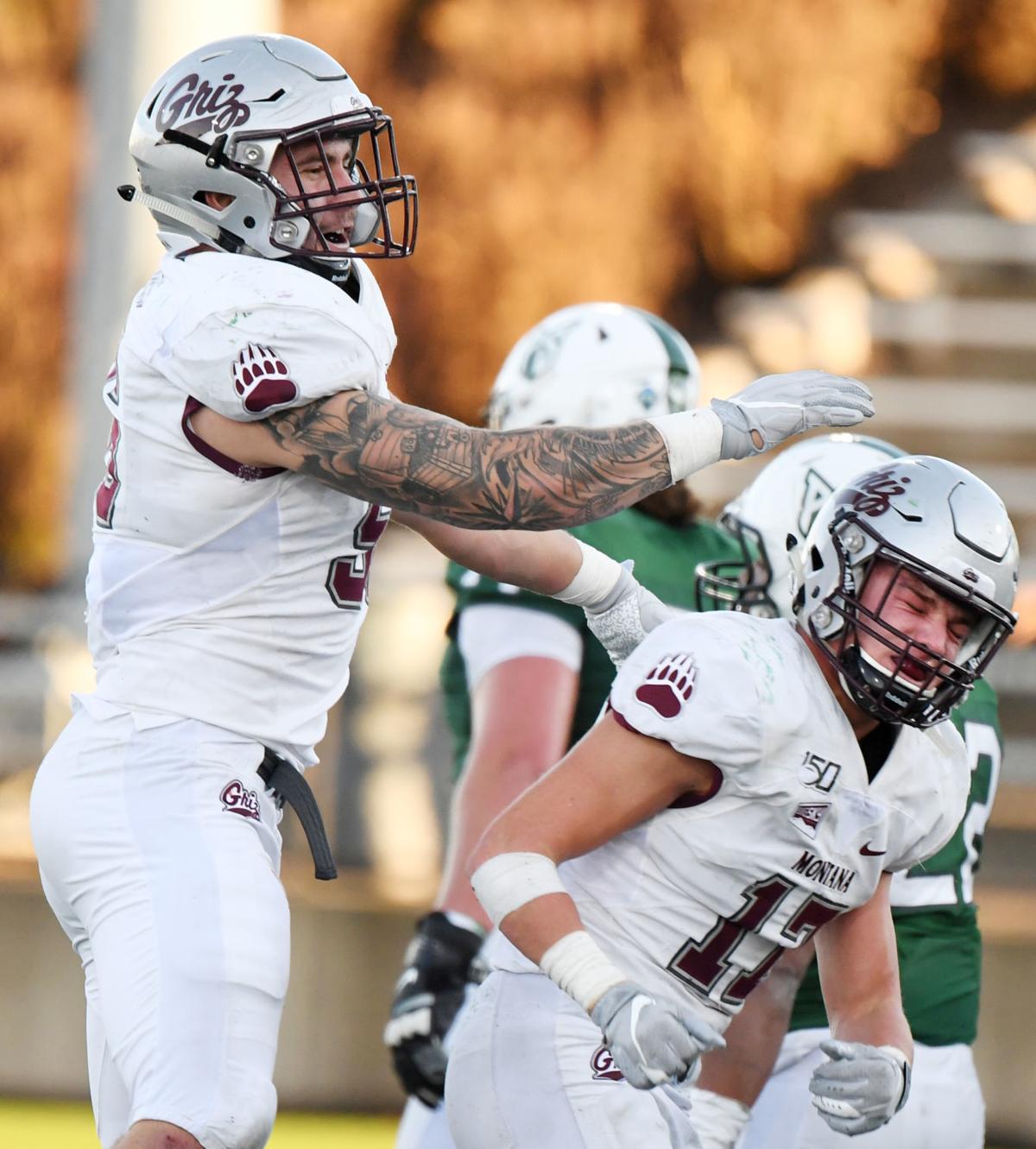 Montana's Joe Babros, left, celebrates with Montana's Robby Hauck after a big stop in the second half. Hauck led the defense with 10 tackles.

Montana's Alex Gubner runs with the ball after pulling down an interception in the fourth quarter of the Grizzlies' 38-23 win over Portland State on Saturday in Hillsboro, Oregon. The 6-foot-3, 285-pound redshirt freshman defensive lineman leads Montana with three interceptions this season.

Montana's Joe Babros, left, celebrates with Montana's Robby Hauck after a big stop in the second half. Hauck led the defense with 10 tackles.

HILLSBORO, Ore. — Saturday couldn’t have gone much better for Montana after a rocky start.

First off, the eighth-ranked Griz took care of their own business by rallying for a 38-23 win over Portland State to overcome a halftime deficit caused by missed opportunities and self-inflicted wounds.

That win moved them to 7-2 overall and 4-1 in conference play, giving them the requisite seven wins to be able to qualify for the FCS playoffs after missing out each of the past three seasons.

"We knew this was the type of season we were going to have. It’s just all the work that we put in, in the offseason and the execution, finishing in the fourth quarter. Everything’s just coming together.”

The seventh victory came in redemptive fashion against Portland State, which upset Montana in Missoula last season. That loss had started the Grizzlies’ tailspin of three consecutive home losses to close the season.

The Grizzlies’ seven wins this season also exceed the six they had last year. They still have three games remaining to add to that total, playing against two rivals and a top-3 team in the country.

There’s also potential to win a split conference championship for the first time since 2009 and earn a seed in the playoffs — and they don’t even have to leave the state of Montana the rest of the regular season.

“This is why we work as hard as we do — to be in this position with November being here,” Montana coach Bobby Hauck said.

Montana is in this position partly because of the play of backup quarterback Cam Humphrey. The Griz were coming off a loss when starter Dalton Sneed got injured, and their season could’ve gone two ways. Humphrey helped guide them to a pair of wins, completing 71.9% of his passes for 511 yards and five touchdowns with no interceptions.

The question going forward is when will Sneed return to replace Humphrey, who’s filled in admirably.

“Everyone’s embraced me,” Humphrey added. “It feels great to be able show everyone that we can do it, whoever’s back there.”

The Grizzlies have owned the second half this season, outscoring teams 206-73 to reverse the narrative of 2018. They’re 7-0 when leading after three quarters after blowing four of their 10 fourth-quarter leads last year. They’ve even pitched a fourth-quarter shutout for four consecutive games and six times in nine games.

“We want to play a clean game,” Montana linebacker Jace Lewis said. “But like the coaches say, you’re always going to have mistakes. You’re going to make them here and there; it’s just how you respond from them. I feel like from last year to this year, we’ve cleaned that up a lot and we’ve worked on just cleaning up our mistakes and putting it in the past.”

Sandwiched around Montana’s win on Saturday were victories by Monmouth and Weber State, both meaningful to the Griz.

In the morning, Monmouth thrashed No. 5 Kennesaw State, 45-21, bolstering what’s been the Grizzlies’ best victory of the non-conference season. The Hawks are now sitting atop the Big South at 4-0 and are in the driver’s seat to garner the conference crown.

At night, No. 3 Weber State rolled to a 36-17 win over No. 6 Sacramento State, the lone team to beat Montana. That keeps the Griz alive for a potential shared Big Sky title should they win out, which includes a game against Weber State on Nov. 16 in Missoula.

Weber State sits atop the Big Sky at 5-0, while Sacramento State and Montana are both 4-1. All three could potentially finish with identical 7-1 records. Every other Big Sky team has at least two league losses.

In addition to beating Weber State, Montana would also have to defeat Idaho this week in the renewed rivalry game that picked up last year when the Vandals dropped down to the FCS.

The Griz close the regular season Nov. 23 by going on the road to face a potentially ranked Montana State squad that’s beaten them in three consecutive seasons.

“The next three games are big games, championship games,” Lewis added. “You just got to treat them the same and approach every game like if it was your last game.”