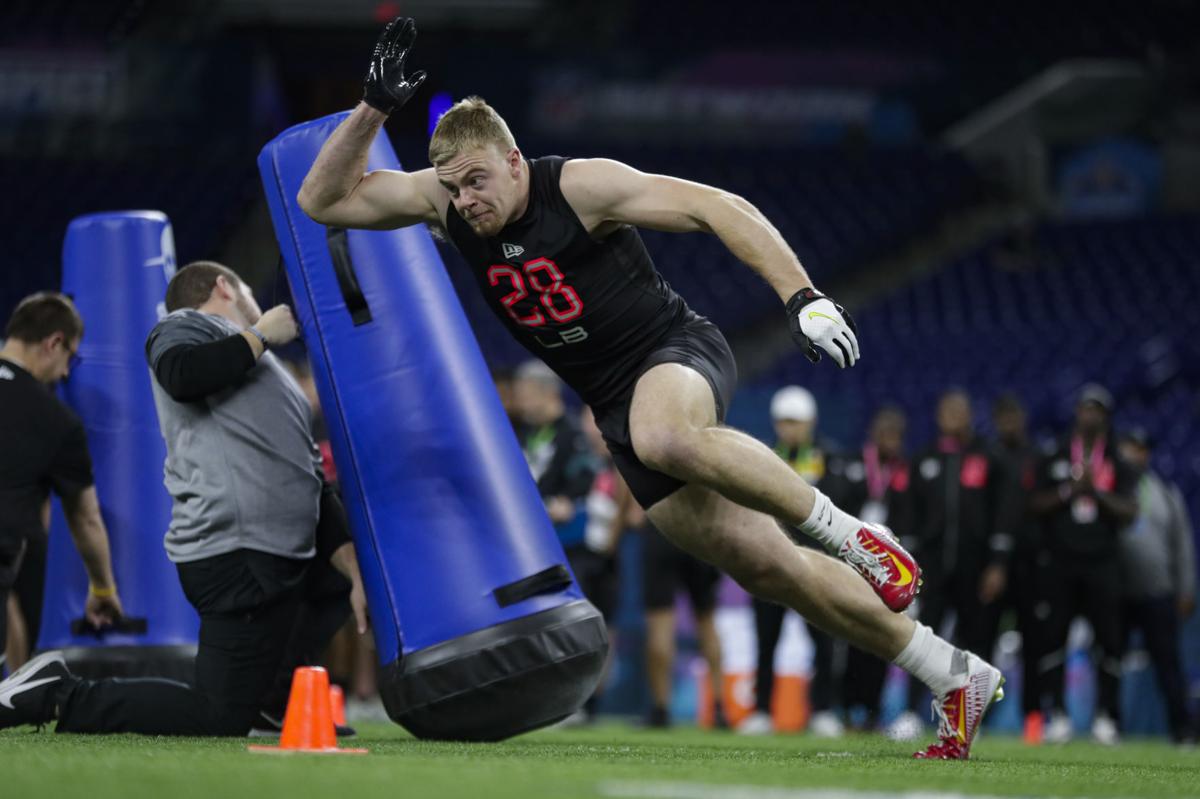 Montana linebacker Dante Olson runs a drill at the NFL Combine on Feb. 29 in Indianapolis. Olson signed with the Philadelphia Eagles as an undrafted free agent on Saturday night. 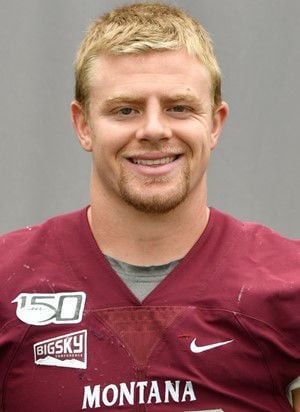 MISSOULA — Former Montana linebacker Dante Olson has been on a path to prove people wrong since he was cut from his high school varsity football team as a freshman.

Olson will try to show he belongs yet again, signing an undrafted free agent deal with Philadelphia Eagles on Saturday night following the conclusion of the NFL Draft.

"This is an incredible feeling, and I couldn't be happier or more humbled," Olson told Stats Perform. "It's been my dream for as long as I can remember to play in the NFL, so this is a culmination of a lot of hard work, but the hard work is far from over."

Olson was aiming to become the first Grizzly to be selected since 2016, when Tyrone Holmes was taken in the sixth round, but ended up going undrafted through 255 picks. In fact, no Big Sky Conference players were drafted and only six FCS players were selected, making it appear that the lack of Pro Days, which were canceled due to the coronavirus pandemic, hurt the smaller-school kids.

In Philadelphia, Olson will join a pair of former Montana Grizzlies who are on the coaching staff. Marty Mornhinweg is a senior offensive consultant and Tim Hauck, the brother of Griz head coach Bobby Hauck, is the safeties coach.

"We are very proud of Dante and all he's accomplished on and off the field during his time at Montana," Bobby Hauck said in a news release. "He's got what it takes to be an NFL player, and we are all excited to see his career continue at the next level."

The 6-foot-2, 237-pound Olson will try to make it in the pro ranks after he put together a record-breaking career at Montana. He finished as a consensus All-American and the winner of the Buck Buchanan Award, given to the top defensive player in the FCS.

Olson broke the school's career tackles record with 397 and toppled both the school and conference's single-season tackles record with 179. He also totaled 26 tackles for loss, 11.5 sacks, three interceptions, five forced fumbles and one fumble recovery. Olson accomplished that in just two years as a defensive starter, playing in 47 games and starting in the final 25 games after one season as a redshirt and the next two primarily on special teams.

Former NFL scout Bob Beers, an ex-Grizzly player and coach, expects Olson to be a middle linebacker who would excel in a 3-4 defense as a runner-stopper on first and second downs. He also feels it'll be imperative for Olson to make an impact on special teams if he wants to increase his chances of sticking in the league and earning playing time on defense.

Olson's draft stock was believed to be hurt when he ran a 4.88-second 40-yard dash at the NFL Combine in February. He didn't get a chance to reduce that time when UM's Pro Day was canceled because of the coronavirus, but he did impress with a 42-inch vertical leap at the Combine, where he got to meet with teams and undergo a medical evaluation.

There should be few character concerns about the native of Medford, Oregon, who was an exemplary representative of the Grizzly football program off the field. Olson excelled in the classroom, being one of 12 finalists for the William V. Campbell Trophy, also known as the "Academic Heisman." The son of a former college coach, he got his degree in business management with a 3.91 grade-point average.

Olson was also a pen pal with kids from Gerber Elementary School in an underprivileged area in rural Northern California for the past two years. It was meaningful way he could help kids after he was bullied in middle school because he was overweight, which led to him developing an eating disorder, being diagnosed with severe depression and anxiety, and contemplating suicide.

Montana players who went undrafted in the past have found some success in the NFL. Brock Coyle spent five seasons in the NFL and Colt Anderson had an eight-year NFL career. Anderson is now an assistant coach with the Cincinnati Bengals.

"Congrats @danteolson25," Coyle wrote in a tweet. All you need is an opportunity. Go get it bro."