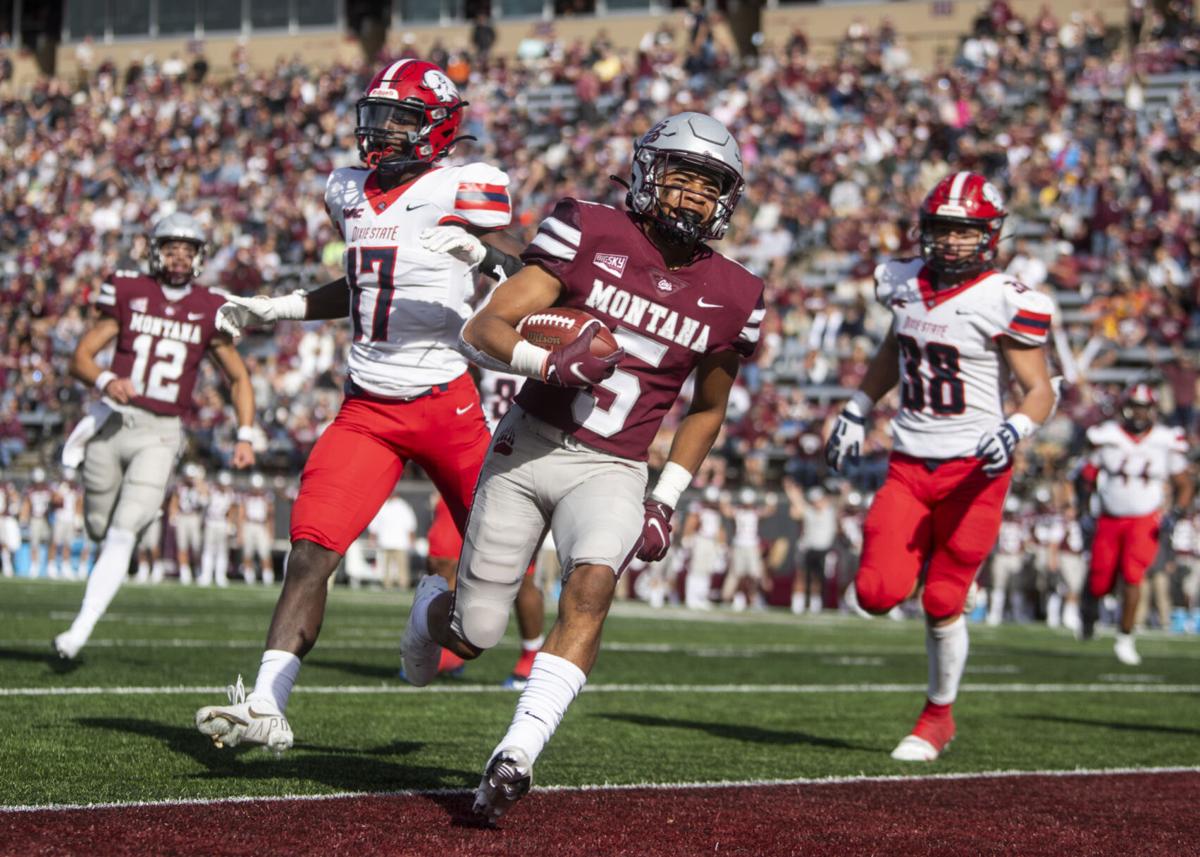 Montana’s Junior Bergen (5) runs into the end zone for a touchdown during the college football game between the Griz and Dixie State at Washington-Grizzly Stadium, Saturday, Oct. 9, 2021. The Griz defeated the Trailblazers, 31-14. 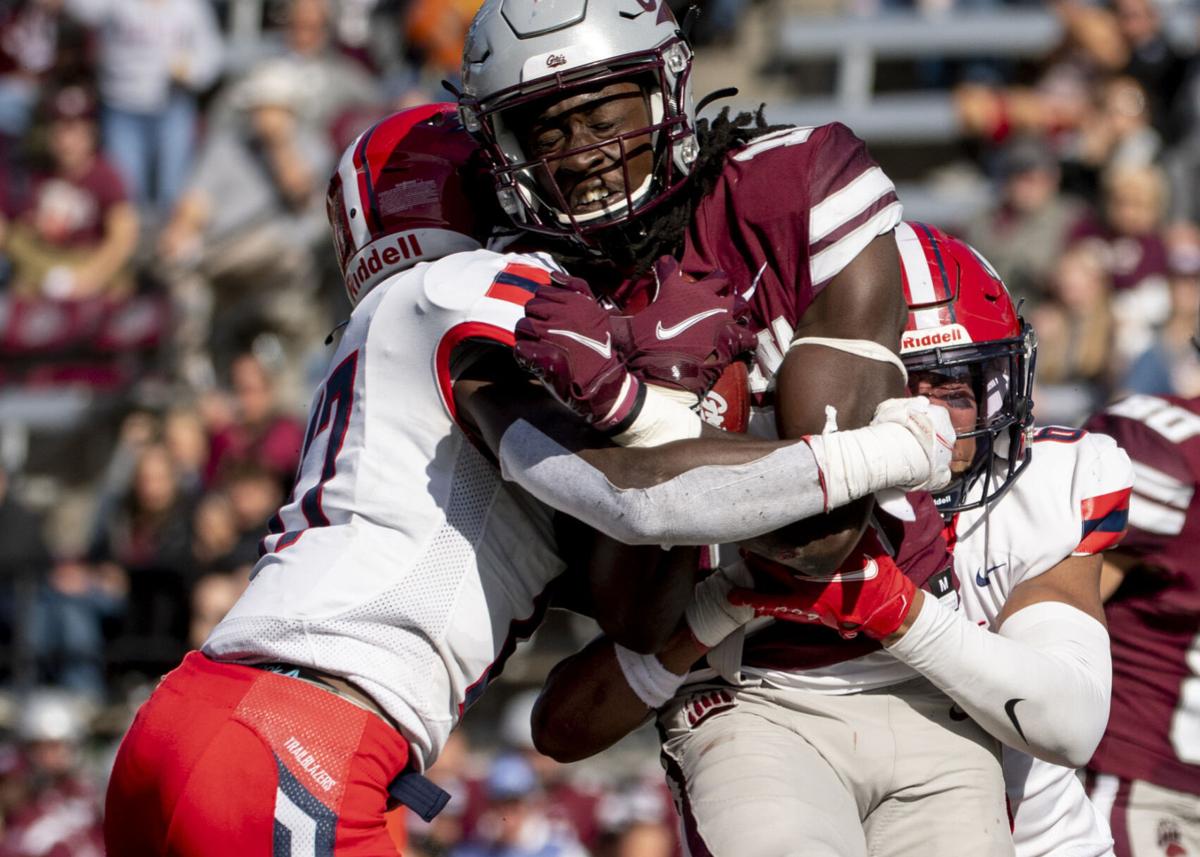 Montana’s Junior Bergen (5) runs into the end zone for a touchdown during the college football game between the Griz and Dixie State at Washington-Grizzly Stadium, Saturday, Oct. 9, 2021. The Griz defeated the Trailblazers, 31-14.

MISSOULA — What can Brown do for U(M)?

That question wasn’t answered until the second half as Montana quarterback Kris Brown struggled throughout the first half Saturday and the Griz football team went into the locker room clinging to a 3-0 lead. The rough patches weren’t entirely unexpected because he hadn’t started a game since his senior season at Bozeman High School in 2018.

Brown, who was filling in for injured Cam Humphrey, had only played in the ends of blowouts before being thrust into four high-leverage plays in last week's loss. He bounced back after halftime this week to helm up the shorthanded offense as the sixth-ranked Grizzlies outscored winless Dixie State 28-14 after halftime to score a 31-14 win and improve to 4-1.

“At the quarterback position, there’s a lot of moving parts, so it’s managing the game, it’s making the throws, it’s getting the checks, all those things,” Montana coach Bobby Hauck said in his evaluation of Brown. “I thought he did just a fine job today. I was impressed with him. There’s a lot going on. … It wasn’t a simple game plan. We didn’t simplify anything. I thought he did a good job.”

Brown got his feet under him more and more throughout the game as he finished 20-of-30 passing for 241 yards, one touchdown and one interception. Hauck challenged the team to “take the win” in the third quarter, and Brown went 9-of-11 passing for 131 yards and one touchdown as UM turned a 3-0 lead into a 17-0 advantage after three quarters.

Brown added a pair of 1-yard QB sneak touchdowns in the fourth quarter as the Griz showed their ability to finish drives in the second half. They scored on four of six drives after the break, taking advantage of short fields to convert drives of 51, 51, 33 and 41 yards.

“I would say as the game went on, the game just kind of sorted itself out and started to slow down,” said Brown, who was 10-of-12 passing for 141 yards in the second half, with the only real blemish that half being a fourth-quarter fumble, his third of the game.

While Brown was the center of attention, the Griz were banged up at other positions on both sides of the ball. The offense still managed 440 yards, including 191 rushing yards, the second most of the season. They did so behind an offensive line that included left guard Hunter Mayginnes, who Hauck said was named the player of the game by the team in the locker room.

Xavier Harris carried the ball a career-high 29 times for 119 yards. Junior Bergen rushed 14 times for 44 yards, including a 6-yard touchdown, his first career score, to make it 10-0 in the third quarter. Isiah Childs, dealing with a reported knee injury, ran just once for 13 yards.

“I thought X did a good job,” Hauck said. “I thought he ran hard. There’s a couple plays today where I thought he ran bigger than he is. I thought he finished some runs really physically. I think 29 carries is probably too many, but that’s hindsight. When the game’s going on, we didn’t really have a firm pulse on that. But that’s a good game by him. He’s ran the ball really well the last two weeks.”

Dixie State tackled well, but UM’s receivers had some catch-and-runs in the second half as they broke tackles and got good downfield blocking. That was despite the passing game missing wideout Gabe Sulser, who got injured last week.

Tight end Cole Grossman stepped up to haul in a career-high 70 yards on five catches. His 8-yard scoring grab, one of multiple swing passes to him in the flat, was his first career touchdown and made it 17-0 in the third quarter.

“We didn’t come up with those plays at halftime or anything,” said Brown, who connected with Sammy Akem and Mitch Roberts four times apiece, for 57 and 30 yards. “We spent all week practicing them. Just waiting for the right time to use them, and like you said, Grossman played great today, caught his touchdown. It helps having playmakers around you as a quarterback for sure.”

Montana had clung to a 3-0 lead at the intermission and looked like it might join the list of top-ranked FCS teams who lost Saturday. Second-ranked South Dakota State lost 42-41 in OT, No. 3 James Madison lost 28-27 and No. 7 UC Davis lost 27-17.

The Griz moved the ball into the red zone three times in the first half but ended with a 27-yard field goal by Kevin Macias, a failed fake field goal run and a lost fumble. Brown had been 10-of-18 passing for 100 yards with one interception and two fumbles, one lost, in the first half.

The defense kept the Griz in the game in the opening 30 minutes and limited Dixie State to 261 yards of offense and 2 of 13 on third downs for the game. The Trailblazers played Kenyon Oblad and Kody Wilstead at quarterback and were missing top receiver and returner Jalen Powell.

The Griz pitched a defensive shutout until Dixie State scored on a 3-yard pass from Oblad to Cade Veach with 92 seconds left in the game. Earlier in the game, Justin Ford had an interception in the end zone and a forced fumble that he recovered on fourth-and-goal.

Dixie State’s first score was a 38-yard fumble recovery touchdown by cornerback Devin Chandler to cut UM’s lead to 24-6 with 7:37 left in the game. That was Brown’s third fumble of the game, an obvious area to be cleaned up.

“Like all our guys, we want them to go play their best game the next week. … So, correct mistakes, learn from them, play better,” Hauck said about the progression he wants to see from Brown going forward. He later adding: “I think that he’ll take correction this week and go play a great one next week, unless Cam makes it back, and then we’ll see.”

Montana and Dixie State will play four times over the next seven seasons.

You'll remember this one, Junior! Bergen scores his first career TD to put the Griz up 10-0!#GrizFB #RTD #GoGriz pic.twitter.com/ZkdFPeM49s