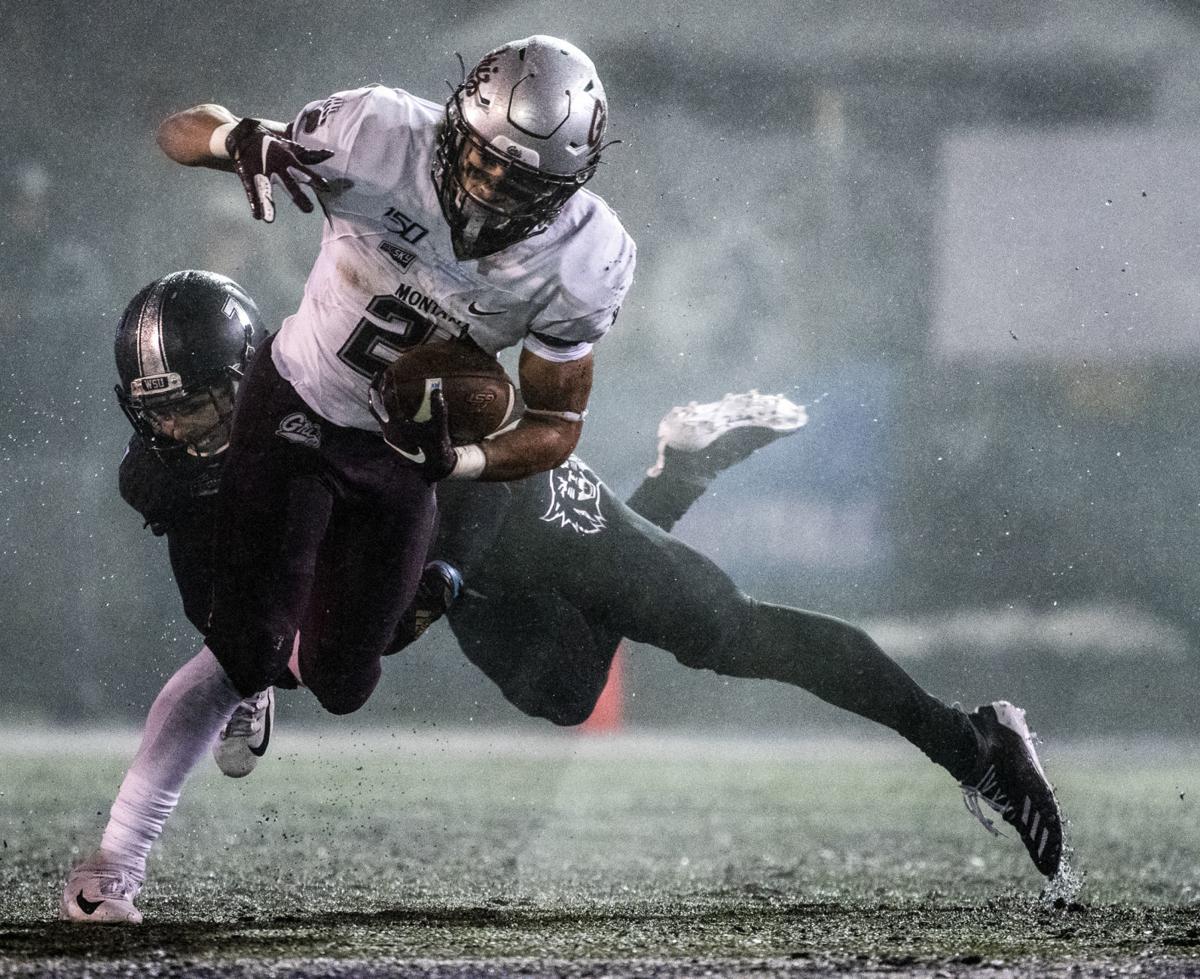 Montana running back Marcus Knight (21) tries to shake a tackle by Weber State's Preston Smith (7) during their FCS quarterfinal playoff game at Stewart Stadium in Ogden, Utah, on Friday night. 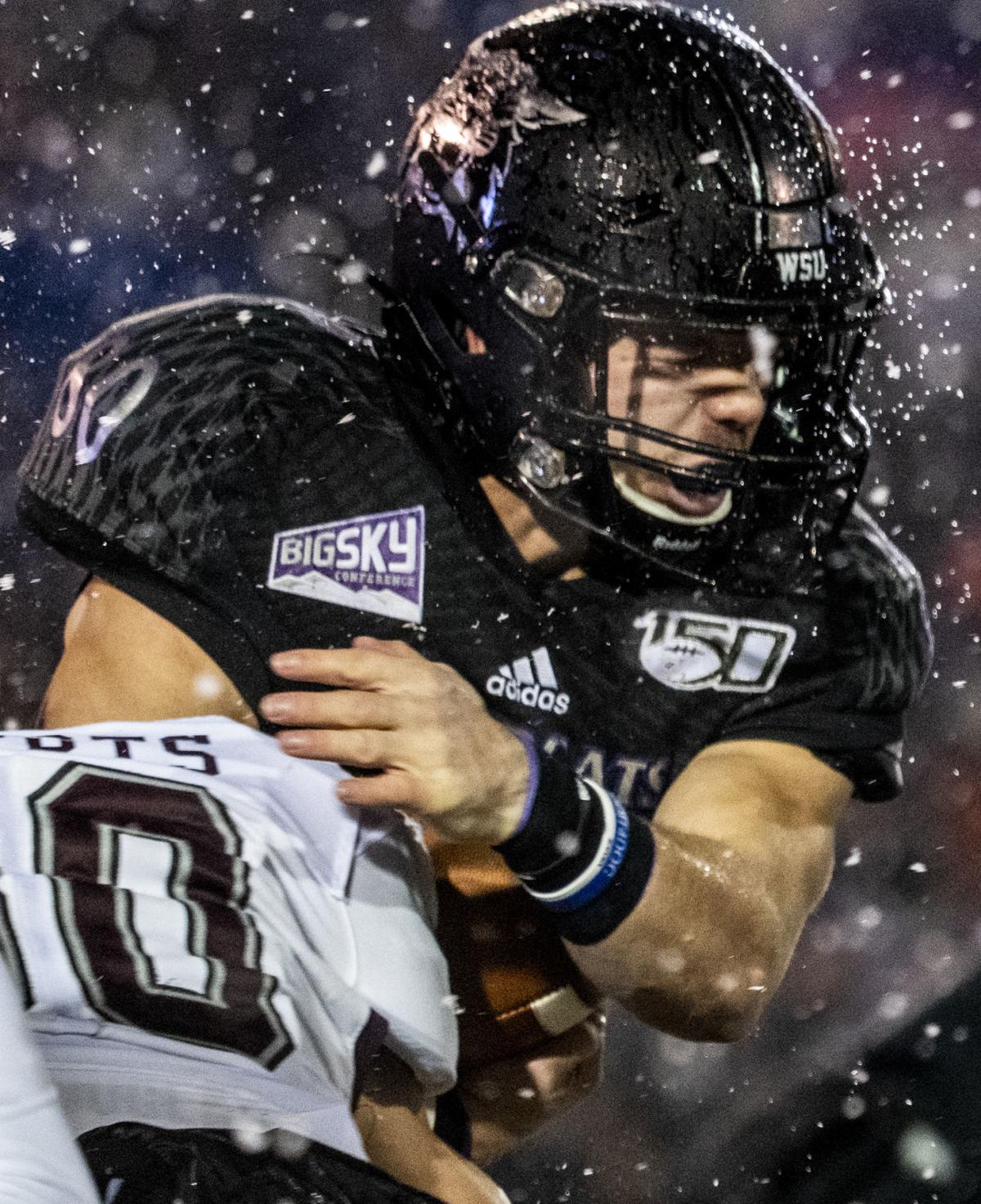 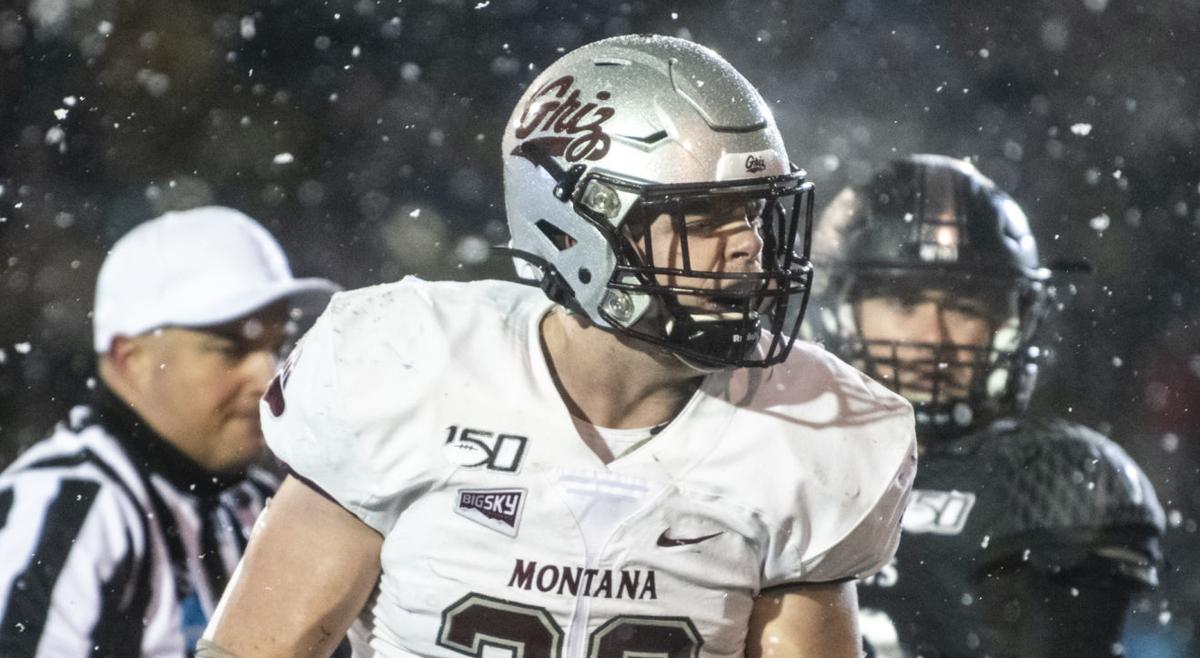 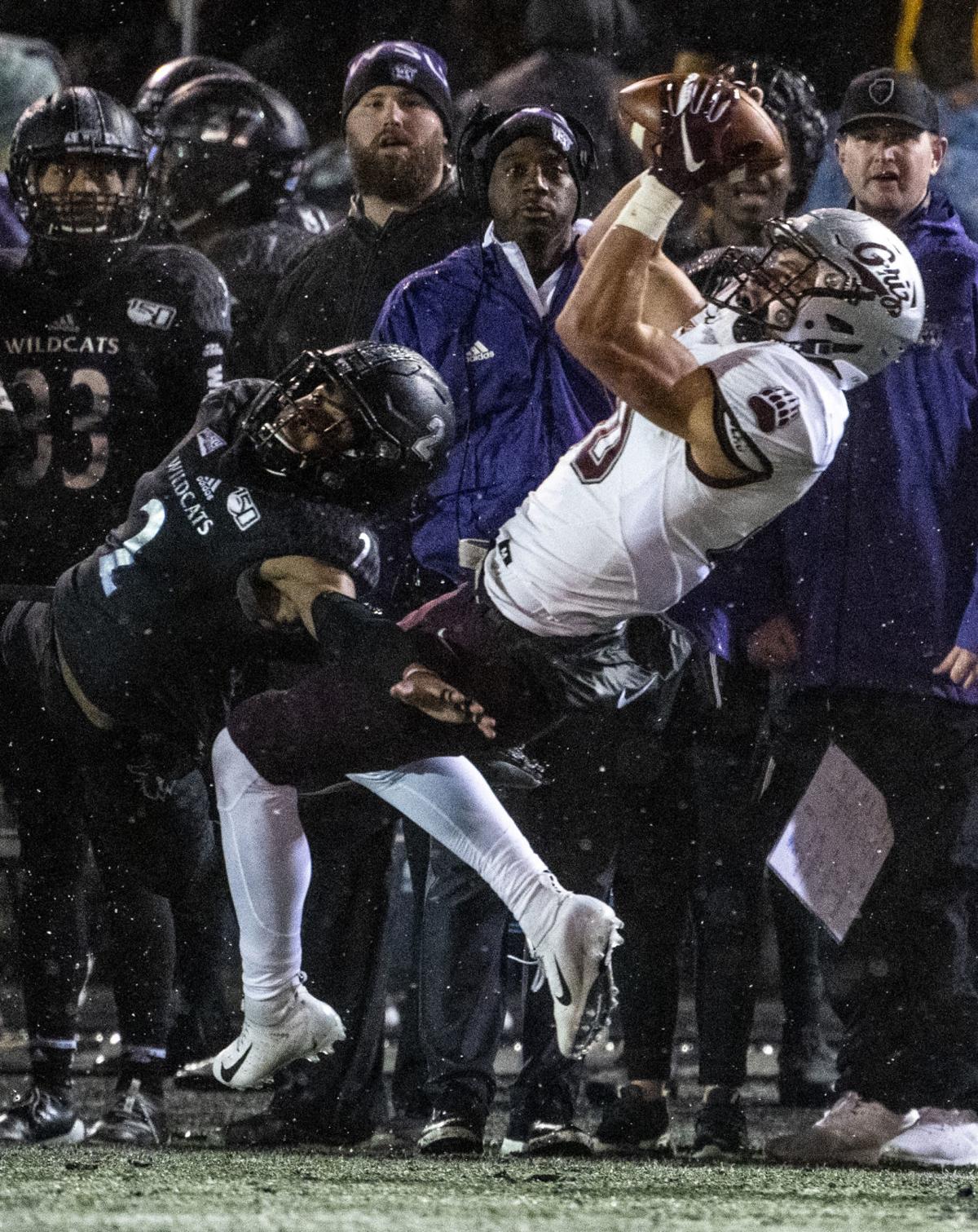 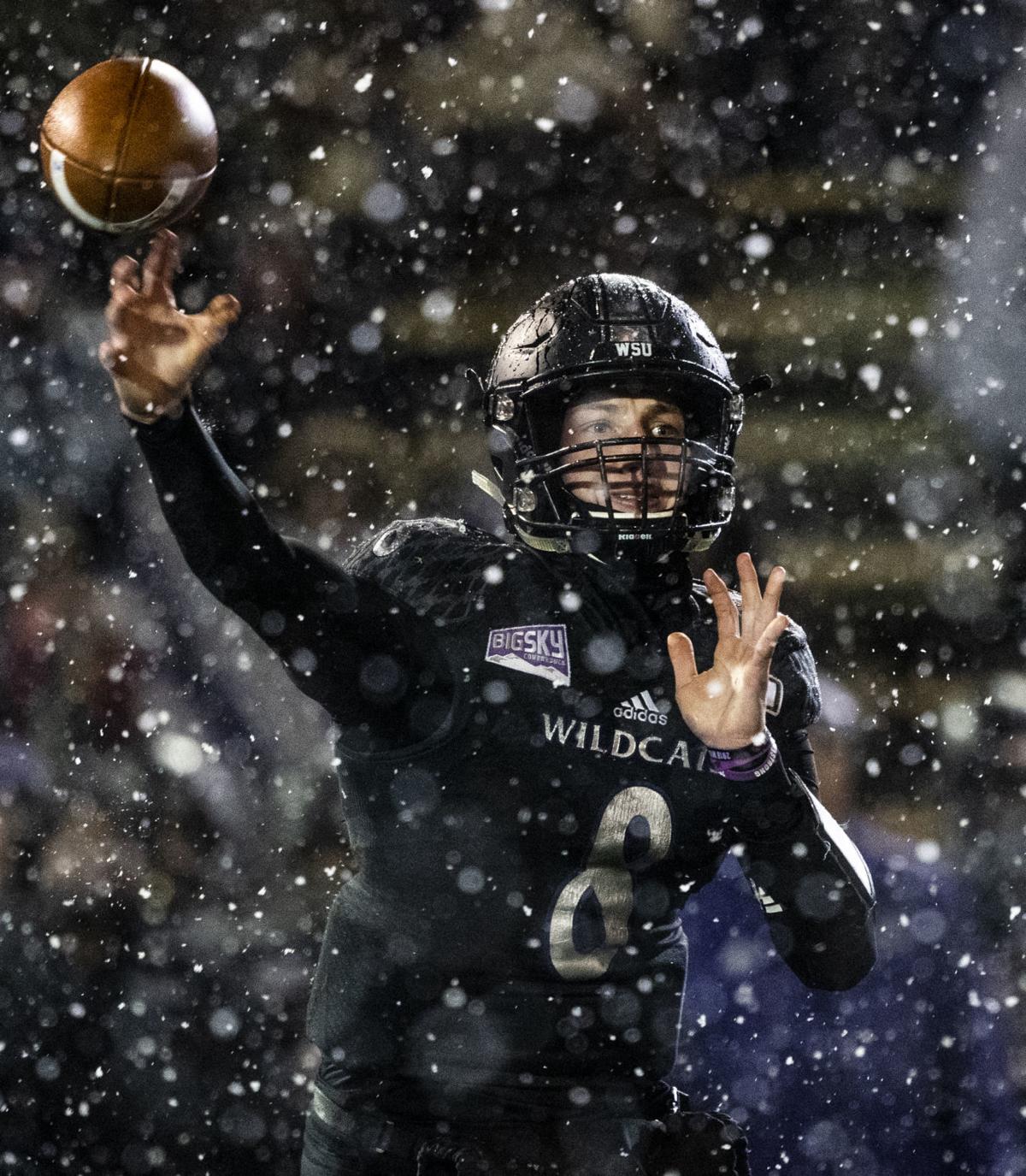 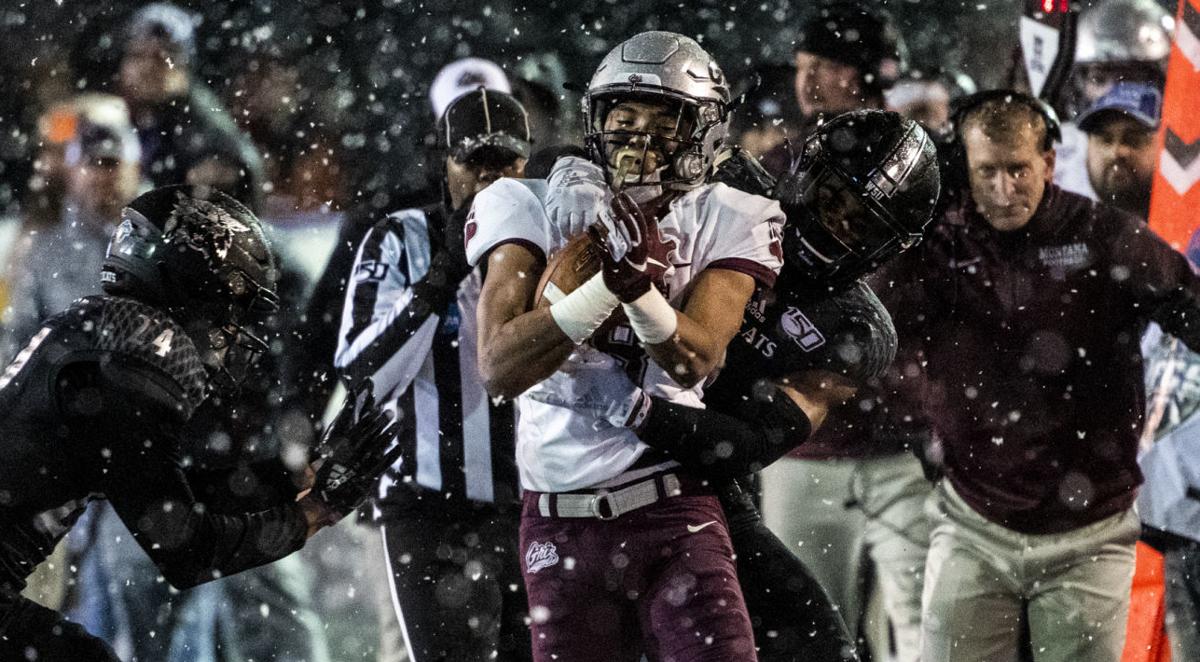 Montana running back Marcus Knight (21) tries to shake a tackle by Weber State's Preston Smith (7) during their FCS quarterfinal playoff game at Stewart Stadium in Ogden, Utah, on Friday night.

OGDEN, Utah — Montana coach Bobby Hauck took it hard that the deciding score in the Grizzlies’ quarterfinal loss to Weber State was a blocked punt returned for a score because he prides himself on the special teams phase of the game.

The blocked punt didn’t count as one of Montana’s five turnovers, but it was more consequential because it helped doom a team that seemingly left its offense in Missoula one week after putting up 73 points in a second-round playoff victory.

The Griz were limited to a season-low point total against an FCS team, senior quarterback Dalton Sneed was picked off five times and the special teams gave up what proved to be the deciding score in a 17-10 quarterfinal loss to Weber State in a mix of snow, rain and fog throughout the game under the lights on Friday at Stewart Stadium.

“That’s kind of the story of the game was the turnovers,” Hauck said after his team’s season ended with a 10-4 record, while Weber State improved to 11-3 and advanced to face James Madison on Dec. 21 in Harrisonburg, Virginia.

“Obviously, the blocked punt was a bad call by our special teams coach, who is me. I didn’t get us in the right protection there, and we gave up a touchdown back on our own end.”

Unlike Montana’s 35-16 win over Weber State in Missoula, the Griz made the fatal mistakes, including on special teams. The punt blocked in the fourth quarter was returned for the touchdown that proved to be the deciding score.

Weber State’s Ja’Kobe Harris had a free run to punter Adam Wilson because the player who would be defending him was directed to run down the field in coverage. Harris then recovered the ball in the end zone for the score, putting Montana down 17-7 with 9:41 to play.

“It’s the difference in the game, certainly,” Hauck said. “There’s all kind of things in 60 minutes of football and there’s all kinds of things that could’ve gone differently, but that’s a big play. That’s a touchdown given up and the defense isn’t giving up a dang yard.”

Montana more than doubled Weber State in yards but struggled to convert them into points as Sneed was intercepted a school-record five times, two of which Hauck attributed to a slick ball. The Griz rose up and held Weber State to just one made field goal on those turnovers, but they were unable to gain a turnover themselves.

Sneed finished 30-of-48 passing for 257 yards, hitting tight end Colin Bingham on a 1-yard pass for the only touchdown in the first half. He was under regular pressure and was sacked six times, including four times by defensive end Adam Rodriguez.

Sneed looked confused by the defense and was picked off for the final time on a potentially game-tying drive with 2:01 remaining. He came into the game having been picked off just nine times in 390 pass attempts.

While Weber State collected the turnovers, Montana’s defense had a stout performance as the Griz outgained Weber State 274-113 in yards, had a 17-8 edge in first downs and converted eight third downs to the Wildcats’ three.

Montana outgained Weber State 170-38 in the first half but gave up 72 yards on the Wildcats’ first drive of the second half. The possession ended in Weber State’s lone offensive touchdown, and it put the Griz in a 10-7 hole they couldn’t climb out of.

Weber State running back Josh Davis scored that touchdown, an 11-yard screen pass on his first play back into the game after leaving with an apparent right leg injury in the first half. Despite his injury, neither team found much success running the ball, with Weber State collecting 43 yards on 37 runs and Montana with 17 on 27.

“Our defense tonight was special,” Hauck said. “They were spectacular. I believe we have the best defense in the conference, and they showed it tonight.”

Defense ruled early as Montana and Weber State combined for nine consecutive punts to open the game. The Griz forced four three-and-outs to start and didn’t allow a first down until the Wildcats’ fifth drive.

Montana nearly got a game-changing play when safety Robby Hauck forced running back Kevin Smith to fumble, but Wildcats receiver David Ames recovered the ball at their 12-yard line. The first quarter that ended in a 0-0 tie.

The Griz struck first on a seven-play, 80-yard touchdown drive that started when Mitch Roberts made a diving 24-yard catch. Sneed got ample time in the pocket and hit Samori Toure over the top for a 40-yard gain to the 2-yard line. Two plays later, Sneed hit Bingham to his right for a 1-yard score to go up 7-0

Montana made its first mistake when Sneed uncharacteristically threw off his back foot toward Jerry Louie-McGee in quadruple coverage. Eddie Heckard intercepted the ball and returned it 19 yards to the Montana 25-yard line. The Griz defense held Weber State to a 41-yard field goal by Trey Tuttle one play after Sandry broke up a touchdown pass to Ty MacPherson in the front, right corner of the end zone. That cut Montana’s lead to 7-3 with 4:29 left in the first half.

Montana marched down to the Weber State 36-yard line with short passes, but Sneed was picked off by Maxwell Anderson in the final minute of the half when he overthrew Louie-McGee at the right hashes. Montana took a 7-3 lead it took into the break.

After the Griz opened the second half with a three-and-out, their defense was picked apart on the ensuing drive. Weber State quarterback Jake Constantine connected with tight end Justin Malone for a 32-yard gain to the Montana 37-yard line. Cornerback Justin Calhoun was later called for pass interference on a play where the Griz brought a heavy blitz. Davis capped the drive with a touchdown to put Montana down 10-7 with 9:46 left in the third quarter.

On the next drive, Sneed got picked off underneath by defensive end George Tarlas, who dropped into coverage and returned the ball to the UM 21-yard line. Griz linebacker Jace Lewis forced a fumble on the ensuing drive, but the Wildcats recovered. The Griz held them to a 41-yard field goal attempt, but a high snap over the holder’s head didn't even result in an attempt.

“We were put in some tough situations and really proud of the way that we responded,” Montana linebacker Dante Olson said. “Obviously, we didn’t keep them out of the end zone enough. It shows on the scoreboard. So, disappointed on that. But proud of the guys and our effort.”

On the Grizzlies’ next drive, Sneed was intercepted for the fourth time, this one coming one play after a 27-yard completion to Roberts was overturned. He tried to rifle a pass to Bingham, and linebacker Noah Vaea stepped in front to snag the ball near midfield.

“He didn’t play his sharpest for sure,” Hauck said of Sneed. “But part of that’s the defense doing a good job too.”

Montana held Weber State to a 28-yard field goal attempt, which defensive end Alex Gubner blocked to keep the Grizzlies’ deficit at 10-7 with 0:14 left in the third quarter.

Two drives later, Sneed was nearly picked off for the fifth time, Wilson had his punt blocked and Montana fell into a 17-7 hole with 9:41 to play.

The Griz responded by putting together a 16-play drive that ate up 6:06 of the clock but resulted in just three points as they settled for a 27-yard field goal by Brandon Purdy. That cut their deficit to 17-10 with 3:23 left in the game.

Montana forced a punt and got a final opportunity, but Sneed was picked off again by Tarlas.

The No. 6 Montana Grizzlies visit No. 3 Weber State in the quarterfinal round of the FCS playoffs at Stewart Stadium in Ogden, Utah.