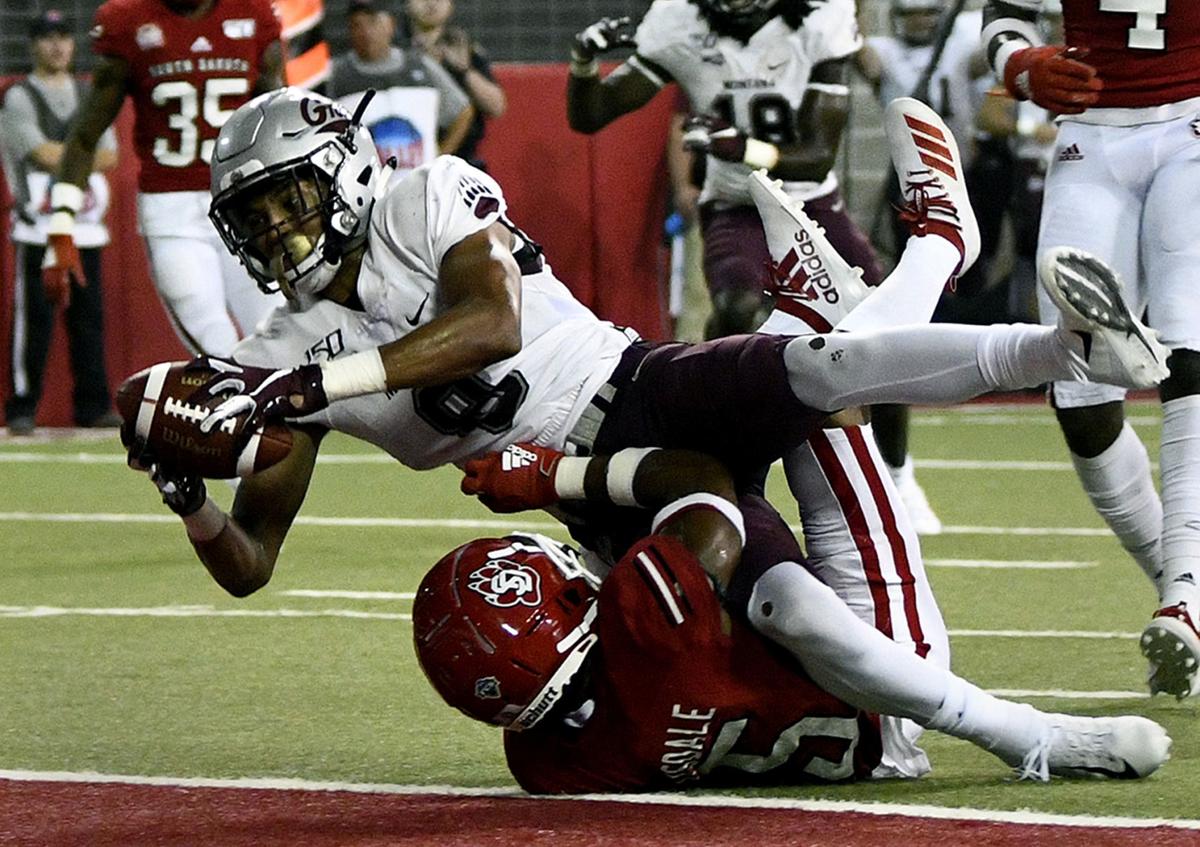 Montana wide receiver Samori Toure scores a touchdown as South Dakota's Cameron Tisdale tackles in the second quarter on Saturday at the Dakotadome in Vermillion, South Dakota. Montana won 31-17 in the opener for both teams. 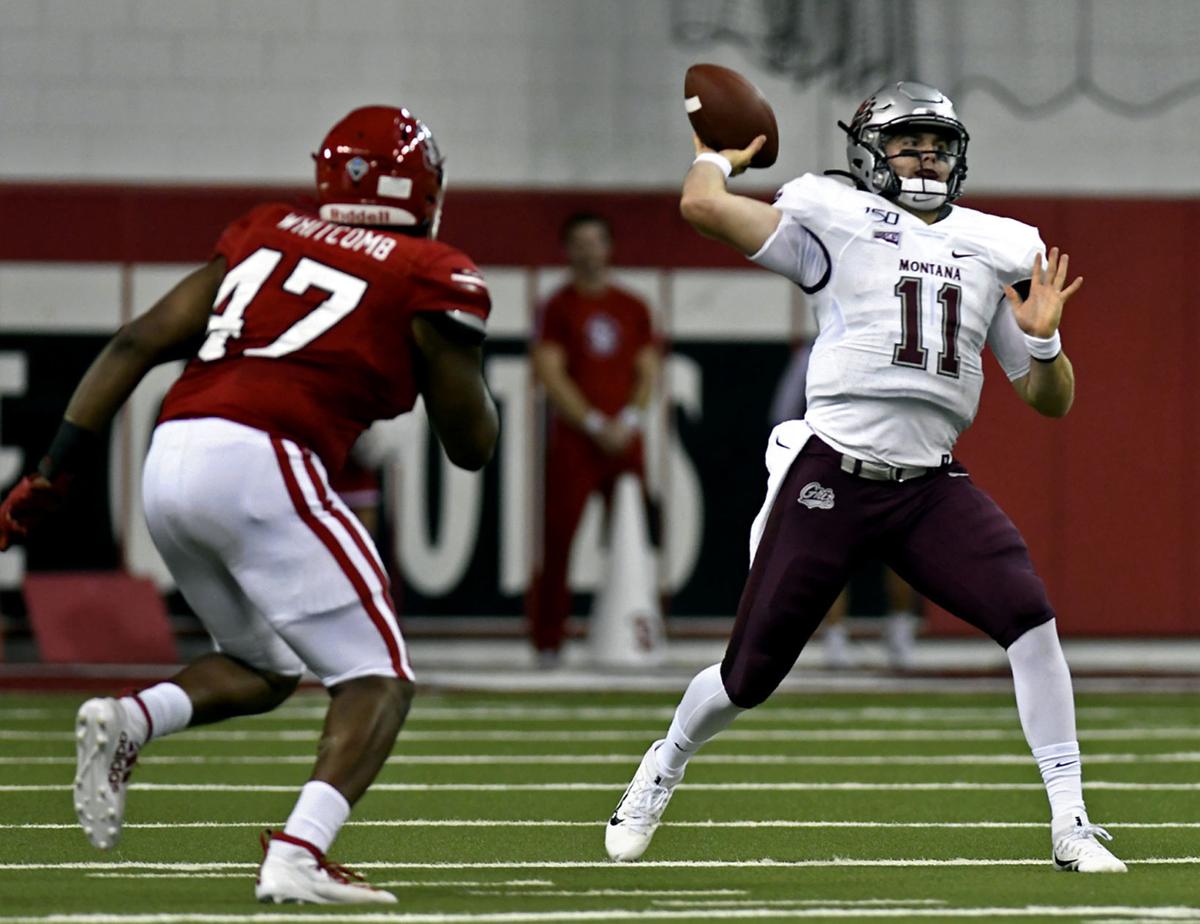 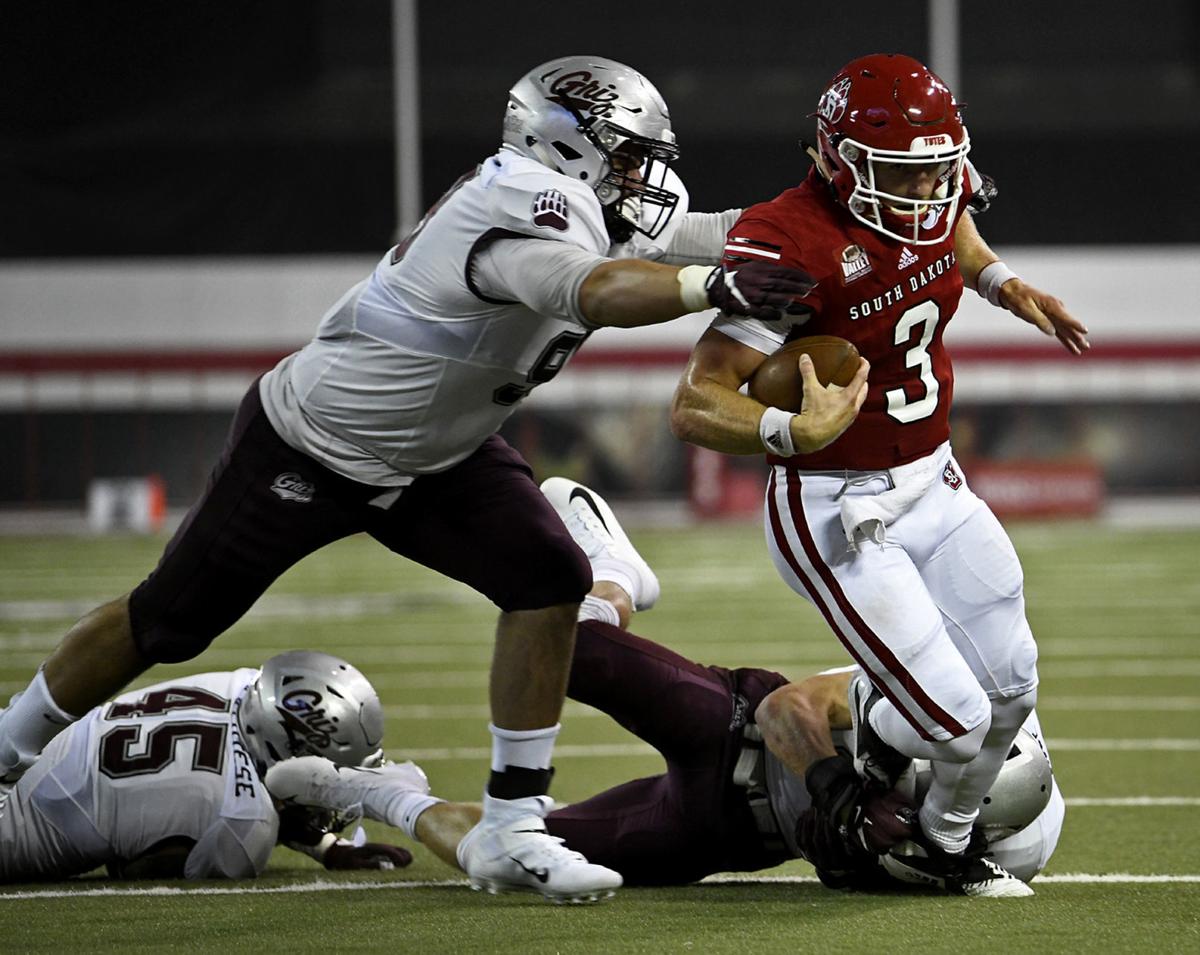 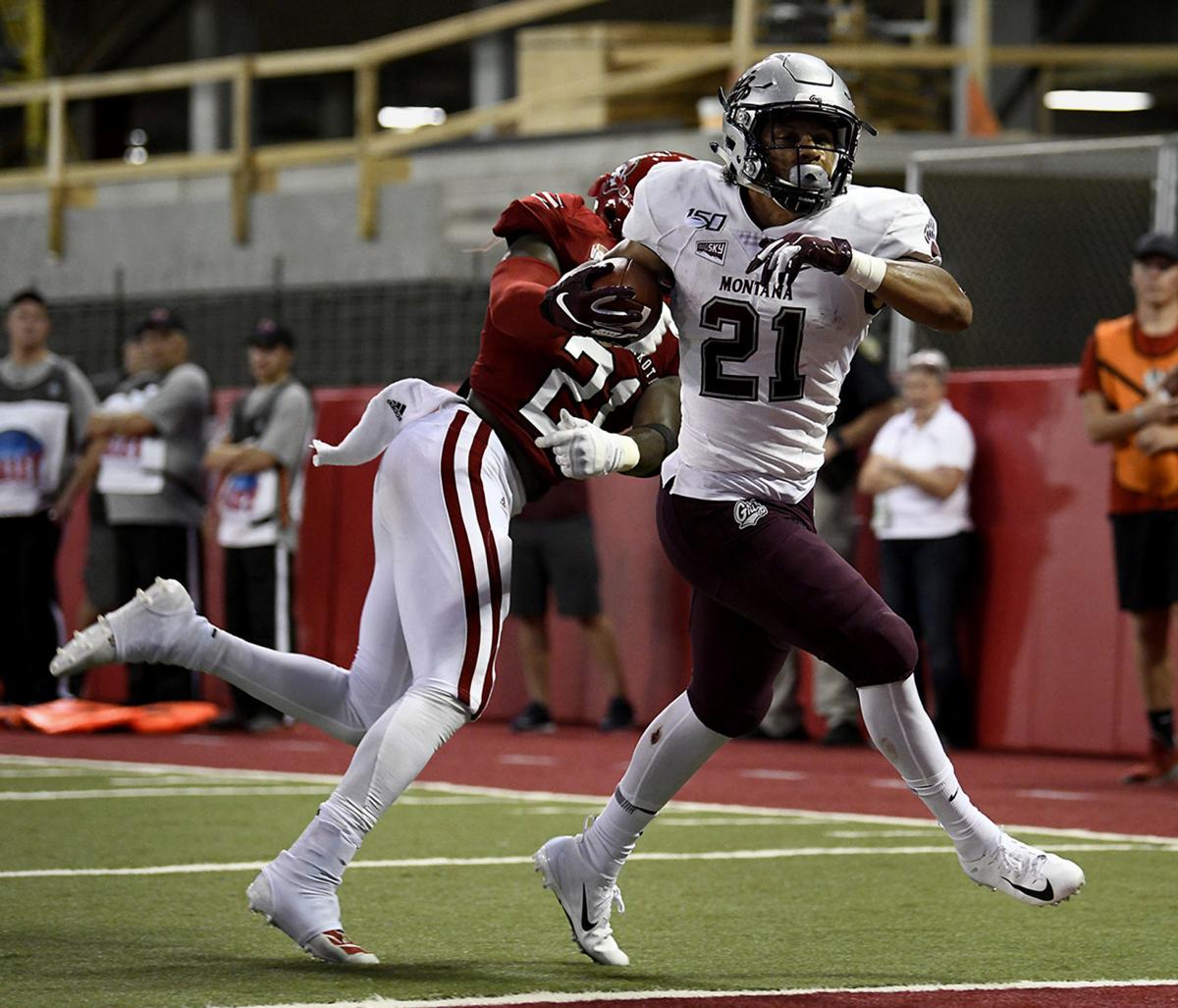 Montana running back Marcus Knight scores a touchdown on a 6-yard pass from Dalton Sneed as South Dakota's Phillip Powell defends in the third quarter. 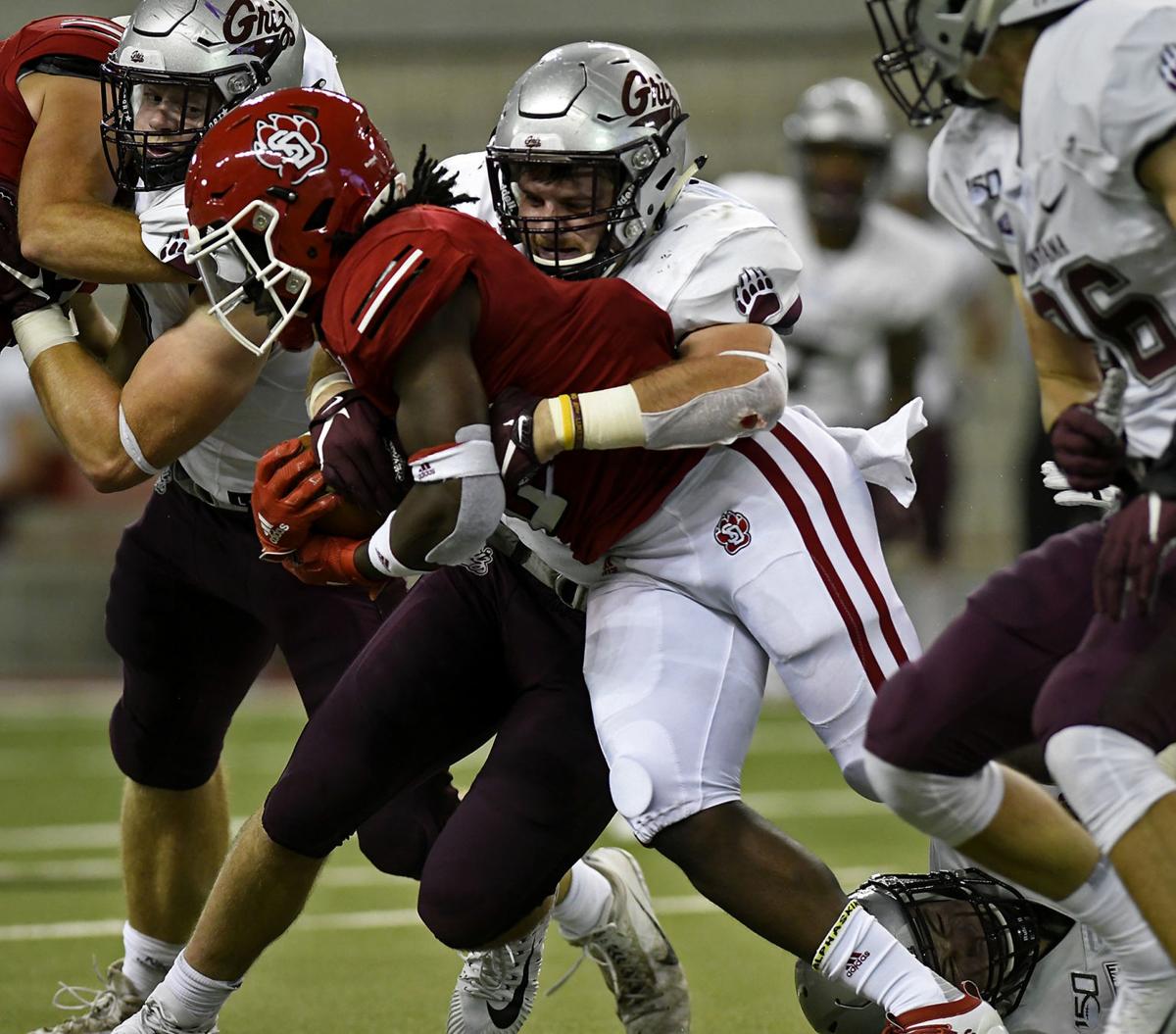 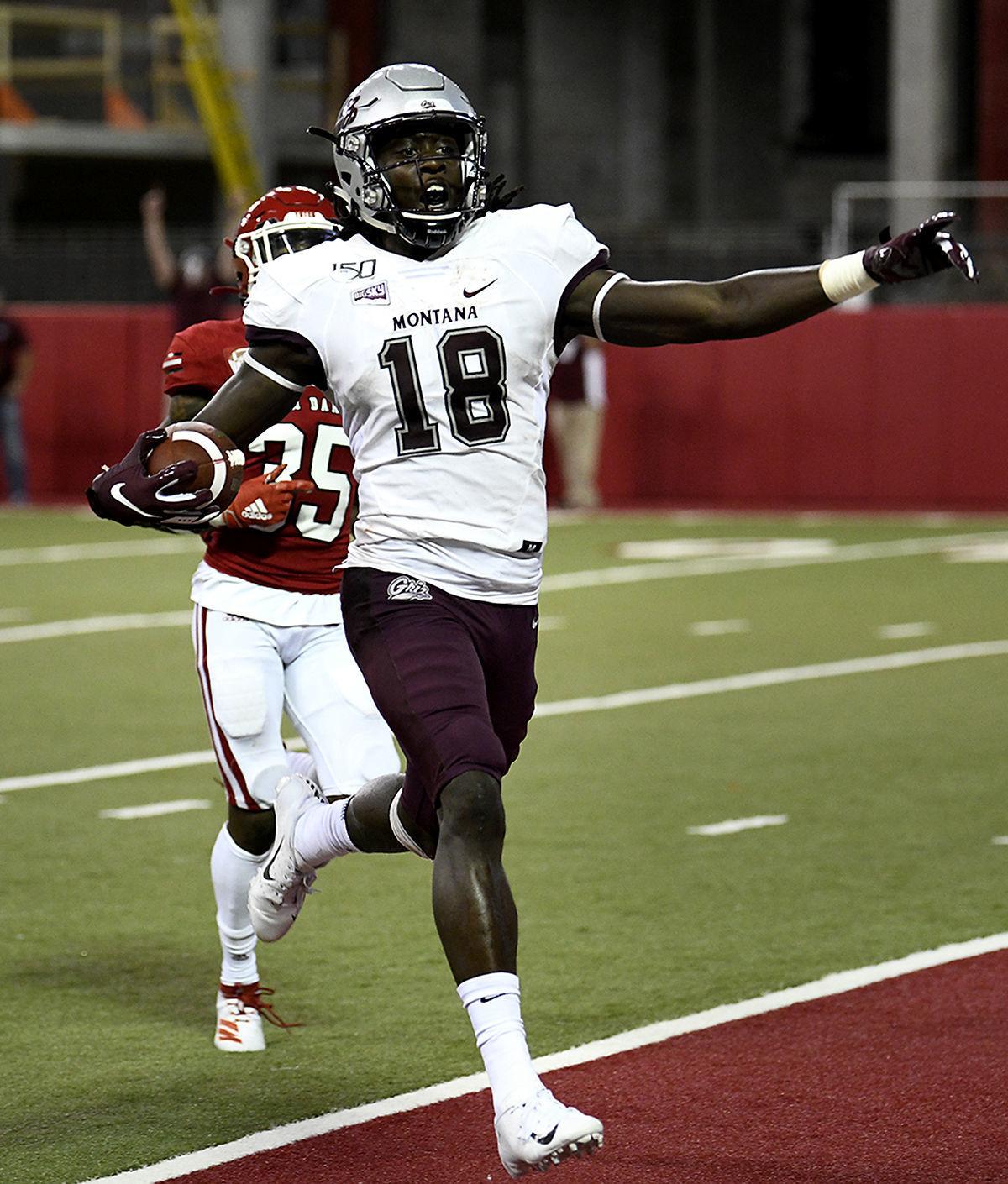 Montana wide receiver Samori Toure scores a touchdown as South Dakota's Cameron Tisdale tackles in the second quarter on Saturday at the Dakotadome in Vermillion, South Dakota. Montana won 31-17 in the opener for both teams.

Montana running back Marcus Knight scores a touchdown on a 6-yard pass from Dalton Sneed as South Dakota's Phillip Powell defends in the third quarter.

VERMILLION, S.D. — If there were questions about the arm of Montana quarterback Dalton Sneed, the redshirt senior put some of them to rest.

Sneed threw for a career-high 430 yards with the help of his diverse stable of wide receivers who shredded the South Dakota Coyotes’ defense as the 25th-ranked Griz scored on five consecutive drives and got some late defensive stands to overcome mistakes in a 31-17 season-opening win on Saturday at the DakotaDome.

"I think they were just giving us easy throws," Sneed said while standing on the field after the game. "They’re backing off and we’re just able to make quick, easy throws in the quick game and let our playmakers do the rest. We got weapons everywhere on the outside, and they really showed that today with their yards after catch."

That was the game plan the Griz came to realize would work against the “position-less defense” employed by new South Dakota defensive coordinator Travis Johansen that geared up to stop the prevalent run-pass option offense.

Montana turned to its wide receivers on the outside, who combined to catch 29 passes, while the running backs and tight ends added eight more receptions. The Griz finished 10 of 16 on third down, picked up 30 first downs and tallied 510 yards of offense.

“They were ganged up to stop the run,” Montana coach Bobby Hauck said. “They gave us several fronts that we had not practiced against that were way different than what we practiced against. They didn’t challenge us at all on the outside. That was their game plan: they were going to make us throw it, and thank goodness we can.”

Sneed completed 37 passes on 52 attempts, spreading the ball around to 10 players and getting picked off twice. The Griz found success with chunk plays on short and intermediate routes followed by yardage after the catch. Twenty of Sneed’s completions resulted in gains of 10 or more yards.

“I think there’s no ceiling for them,” Sneed said of his receivers. “Today was just a glimpse of what they can really do. They make guys miss, they run great routes, they get open, they catch the ball. I can’t ask for anything better than that as a quarterback.

Sneed did take some shots down the field by stepping up in the pocket. He connected with Toure for 45 yards on a post route on the first play of the game and found him for a 16-yard touchdown pass at the goal line that gave Montana a 7-3 lead in the second quarter.

In the second half, Sneed hit Akem in stride for a 43-yard touchdown on a post route to give Montana a 24-10 advantage on the first drive. He also found running back Marcus Knight for 6-yard touchdown pass in which Knight used a nifty move in space to beat the defender and give Montana a 31-17 lead.

It was on the next drive that Sneed felt South Dakota finally made a defensive adjustment to deal with the wide receivers.

“When we got out there, they were playing us very soft,” Toure said. “They were playing off, like 10 yards. We know we can just take 5 yards, 5 yards, 5 yards. Once we keep doing that, then they’re going to tighten up, and then that’s when we can take the deep shots on them. It’s just a matter of watching a lot of film, recognizing what coverage you see and then just executing.”

South Dakota quarterback Austin Simmons completed 23 of 33 passes for 246 yards with two touchdowns and one interception. He finished with 25 rushing yards, 21 of which came on one scramble. His 271 yards of total offense came up short of his 314.2 that led the Missouri Valley Football Conference last season.

Simmons found a potent receiver in Kody Case, who caught 11 passes for 144 yards and two touchdowns. Case’s second touchdown grab, a 9-yard score on fourth down in the red zone, pulled South Dakota within 24-17.

In the fourth quarter, Montana cornerback Justin Calhoun had an interception and the Grizzlies’ defense forced two turnovers on downs, the second of which came after Sneed threw an interception in the end zone.

The Griz finished with just 80 yards on 28 carries as South Dakota geared up to stop the run and Montana’s offensive line didn’t get much push. One of the carries was a 2-yard touchdown run by Sneed off left guard for a 14-3 lead in the second quarter.

The offensive explosion from both teams came after a first quarter that featured a battle of defenses. The teams combined for four punts, one missed field goal and one interception.

Montana kicker Brandon Purdy made a 43-yard field goal to give the Griz a 17-10 lead heading into the half. Purdy missed his first attempt, wide left from 37 yards, on Montana’s first series.

“We have a ton of stuff to work on,” Hauck said. “It’s always good to get a win and be able to correct. We missed a short field goal. We turned it over on the 6 going in and then we took a knee on the 5 or whatever it was there at the end. I’m not sure that the score is indicative of how lopsided the game was, but it doesn’t matter. It’s a good win.”

Montana defeats South Dakota 31-17 in the season opener for both teams at the Dakotadome in Vermillion, South Dakota

The Montana Grizzlies opened their 2019 season in Vermillion, South Dakota against the Coyotes. Here's what you may have missed.