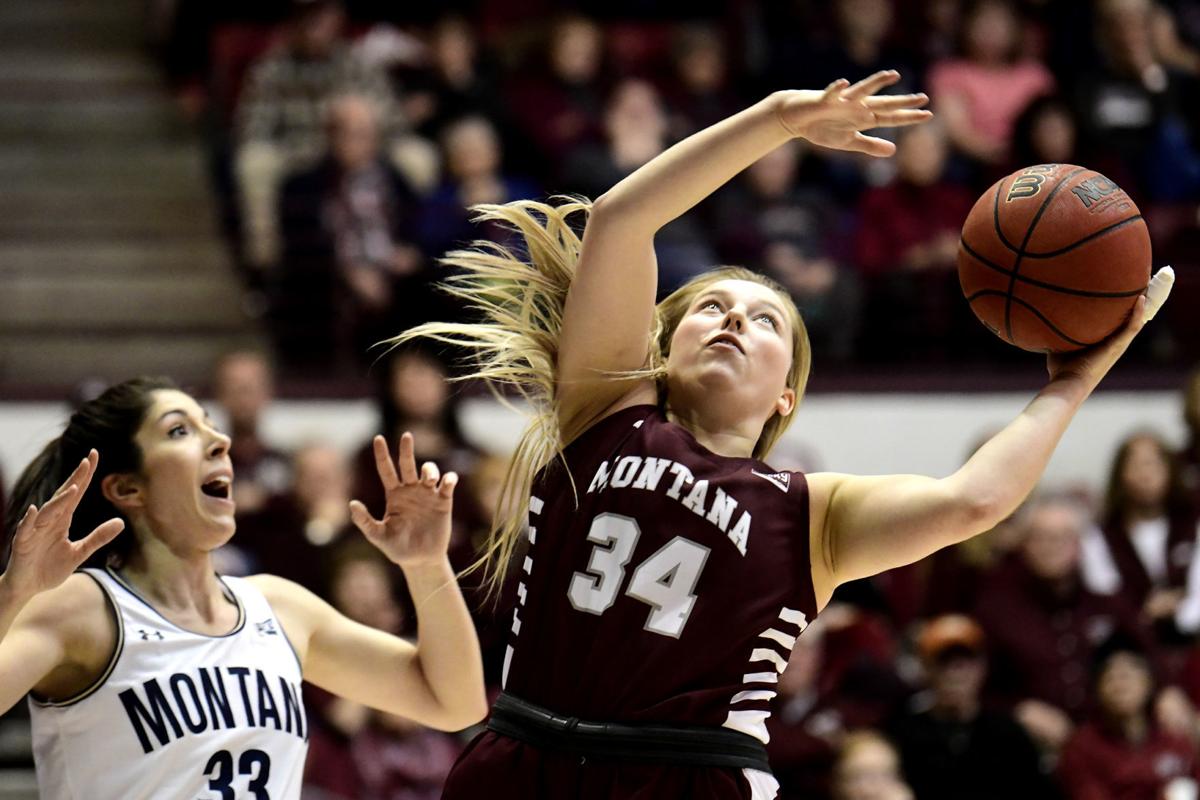 Montana's Madi Schoening (34) shoots while Montana State's Madeline Smith (33) looks on during Saturday's game at Dahlberg Arena. The Lady Griz fell to the Cats, 66-61, in overtime. 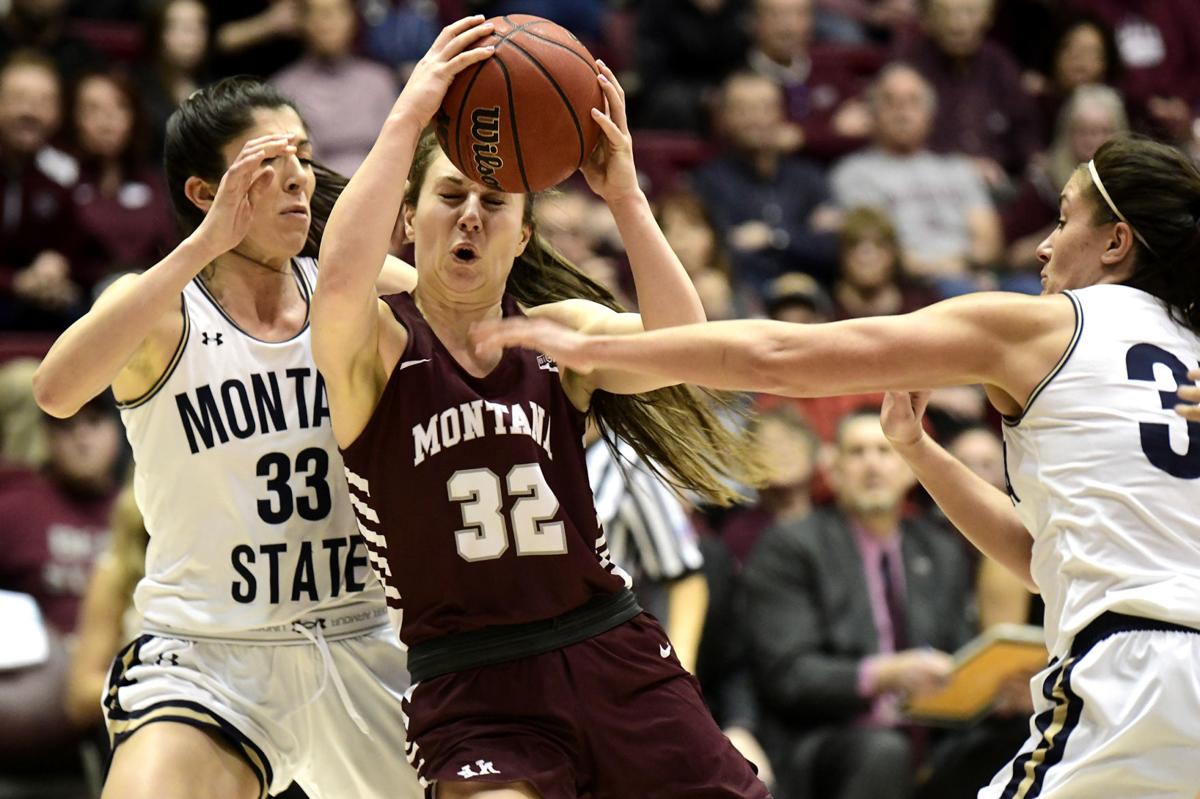 McKenzie Johnston (32) will lead Montana into a critical Big Sky Conference game at Idaho State Saturday. Johnston needs just 28 more points to move into the Lady Griz top-10 all-time list. In this photo, the senior is shown driving the ball in a recent home game against Montana State. 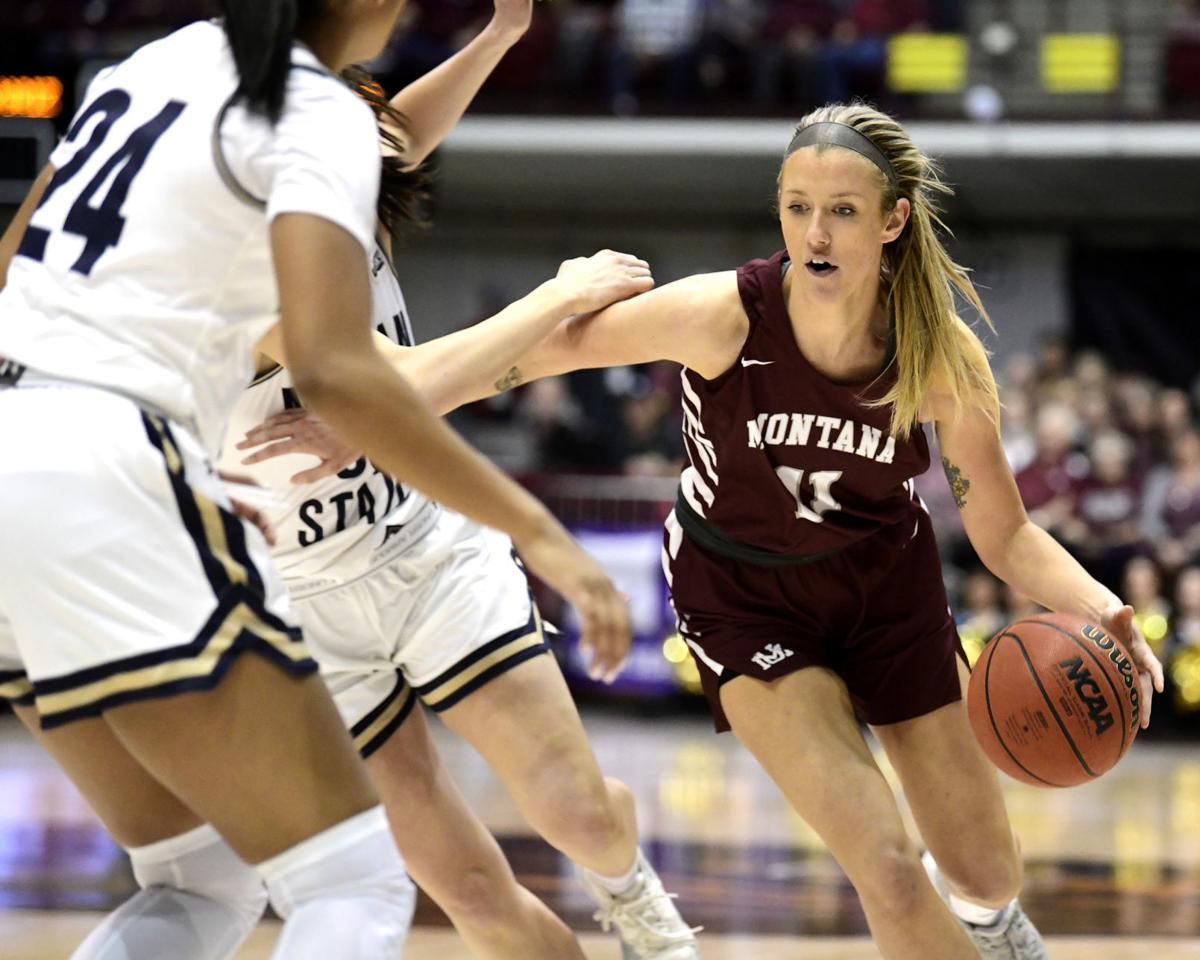 Montana's Abby Anderson (11) dribbles into the lane during Saturday's game against Montana State at Dahlberg Arena.

Montana's Madi Schoening (34) shoots while Montana State's Madeline Smith (33) looks on during Saturday's game at Dahlberg Arena. The Lady Griz fell to the Cats, 66-61, in overtime.

McKenzie Johnston (32) will lead Montana into a critical Big Sky Conference game at Idaho State Saturday. Johnston needs just 28 more points to move into the Lady Griz top-10 all-time list. In this photo, the senior is shown driving the ball in a recent home game against Montana State.

Montana's Abby Anderson (11) dribbles into the lane during Saturday's game against Montana State at Dahlberg Arena.

MISSOULA — Determined to end a string of losses to Montana State, the Montana women's basketball team played with rare focus and intensity for the first three quarters Saturday.

The Lady Griz built a 14-point lead late in the third quarter with the help of a tricky zone defense that confounded the Bobcats. Then Montana fell back to Earth, missing all 15 of its shots in the fourth quarter en route to a 66-61 overtime loss in front of 3,617 fans at Dahlberg Arena.

The win was Montana State's third straight over archrival Montana and sixth in its last seven tries. It also marked the third time in four years the Cats dealt the Lady Griz a heartbreaking, nail-biter defeat in Missoula.

"It's huge," said Bobcats senior forward Fallyn Freije, the hero of the game with 27 points, 14 rebounds and clutch play down the stretch.

"We obviously feel like we didn't do some things right, didn't play our best. You can say all that stuff. But teams that can find a way to win when you are down 14 points, that's really the heart and true family of our team that we're going to come together. It's great to get games like this now."

Freije added two big free throws with 23.3 seconds left in OT and Montana State averted a loss to the hyper-motivated Lady Griz. The Bobcats solidified their spot atop the Big Sky Conference with a 9-1 mark (13-6 overall) and fourth-place Montana fell to 6-5, 11-9.

Lady Griz coach Shannon Schweyen, whose team took a two-game win streak into the game, put the loss in perspective.

"You never get over them. They hang with you for life," she said. "It's one of those things. They're tough. We lost in overtime a couple years ago to them here. But you persevere and get better and go to work Monday. There are positive things you can learn from these games."

The Lady Griz jumped to a 33-27 halftime lead behind hot shooting and strong defense in the paint. Montana State struggled from the floor, hitting just 8 of 30 attempts, including 1 of 9 from 3-point range.

McKenzie Johnston was a catalyst early for the hosts. She scored nine first-half points, hitting 3 of 5 shots from the field and three free throws.

The third quarter had been a bugaboo for Montana in mid-January games but not on Saturday. The Lady Griz took a 48-37 lead into the final frame and Montana State was still in a quandary on the offensive end with 10 minutes left to play in regulation, having missed 32 of 46 shots from the floor.

"We were out of sorts based on what they were doing defensively and that's on me to do a better job of us just not thinking the game and just focusing on executing," MSU coach Tricia Binford said. "The crowd affected us as well. It was really hard for them to hear ...

"It was one of the first games where I've actually had to talk to my team in the huddle and say this doesn't look right. We were a little bit dazed there."

The Bobcats didn't exactly light up the scoreboard in the fourth quarter, hitting 4 of 13 shots from the floor. But they were 6 for 6 from the foul line and Montana managed just three points in the period, struggling with Montana State's man defense after the Cats stopped switching on screens.

"The first half we were taking our time, getting good open looks and things were falling for us, which helps," said Johnston, who finished with a team-high 20 points for the Lady Griz. "In the second half we were rushing shots. They got us out of our tempo and that was a big part of it. We just have to stop having that where we drop off for a quarter."

To their credit, the Lady Griz regrouped in overtime behind the aggressive play of junior forward Madi Schoening. She had three buckets in the first three-plus minutes of OT, the last of which gave the hosts a 61-60 lead with 1:41 left.

Montana wasted a chance to add to the lead on a shot clock violation, then Freije delivered a basket from left of the free throw line to put her team in front for good. Schoening missed a 3-ball and Montana later turned the ball over as the team went scoreless over the final 100 seconds.

"It was just disappointing because we put together such a good ball game," Schweyen said. "We still managed to hang on and let it get to overtime but couldn't get it done.

"We had some things we weren't executing very good down the stretch offensively at all. But I was proud of the way the ladies played. They can play with anybody in the conference."

Montana will hit the road for a game at Eastern Washington Thursday. Montana State will play Idaho in a showdown of the Big Sky's top two teams on Thursday in Moscow, Idaho.

The Lady Griz narrowly lost a hard fought game against Montana State in overtime at Dahlberg Arena on Saturday afternoon.

Malachi Syvrud's spark off the bench and a stingy defense led third-ranked Helena Capital to its fifth consecutive win.