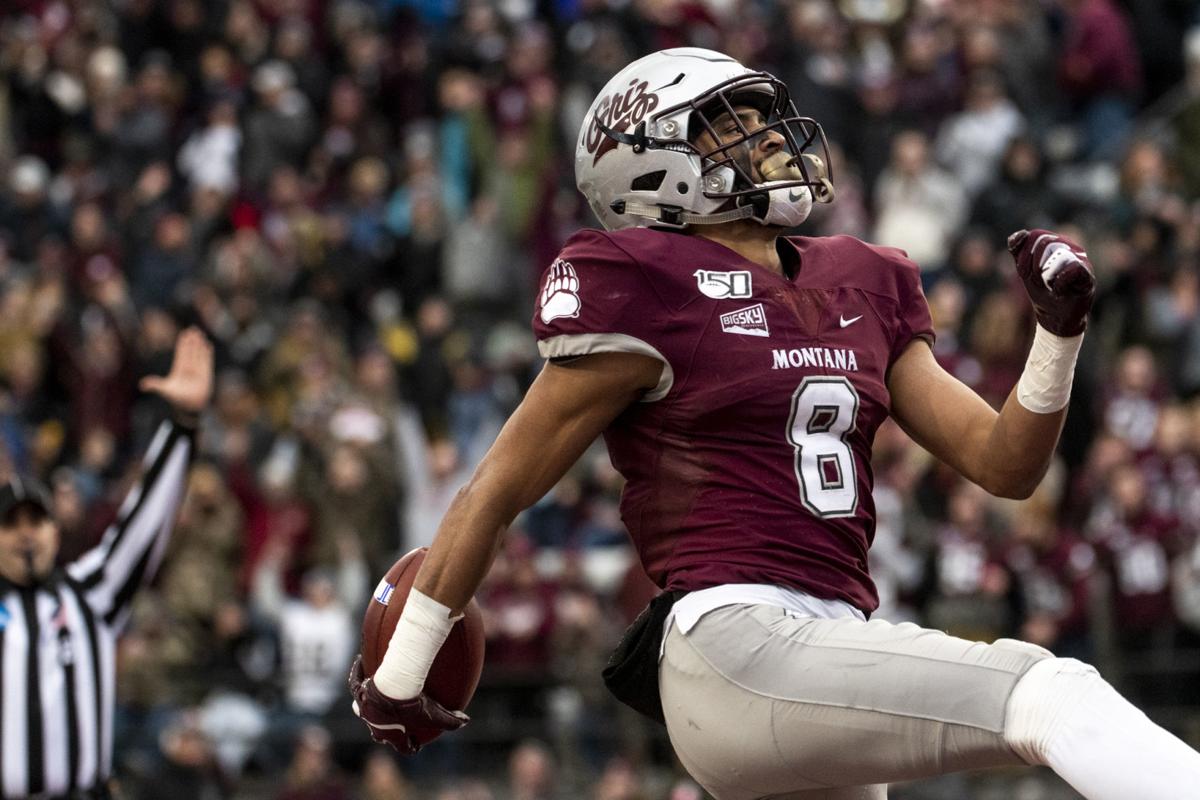 Montana's Samori Toure prances into the end zone at Washington-Grizzly Stadium on Saturday. 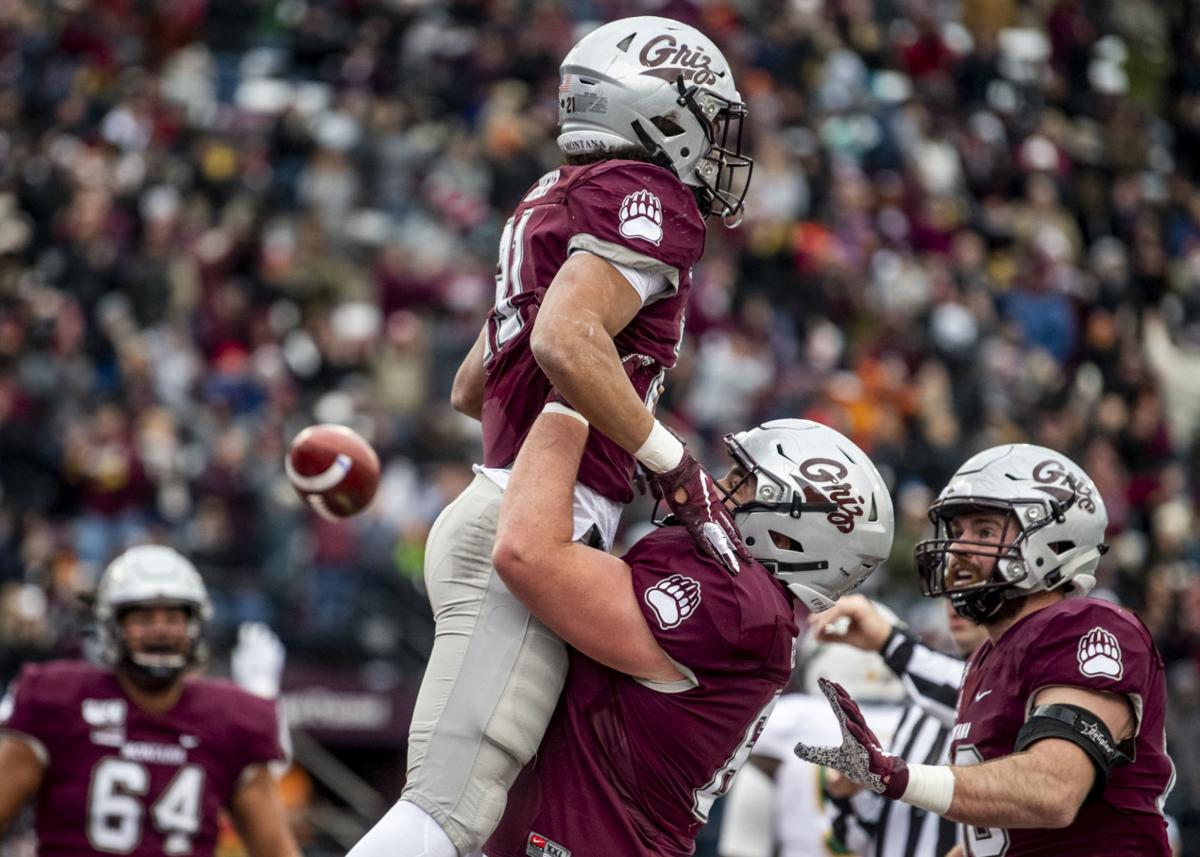 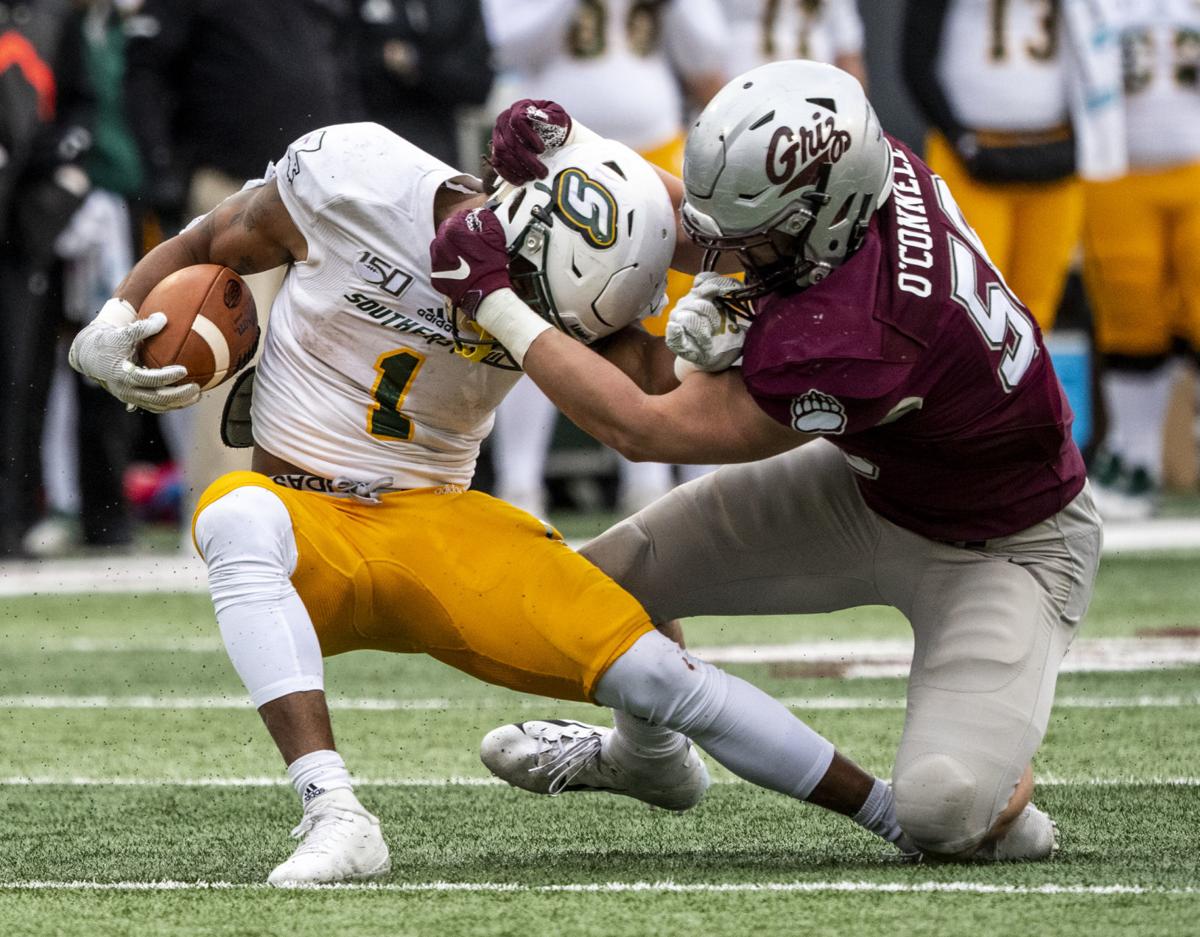 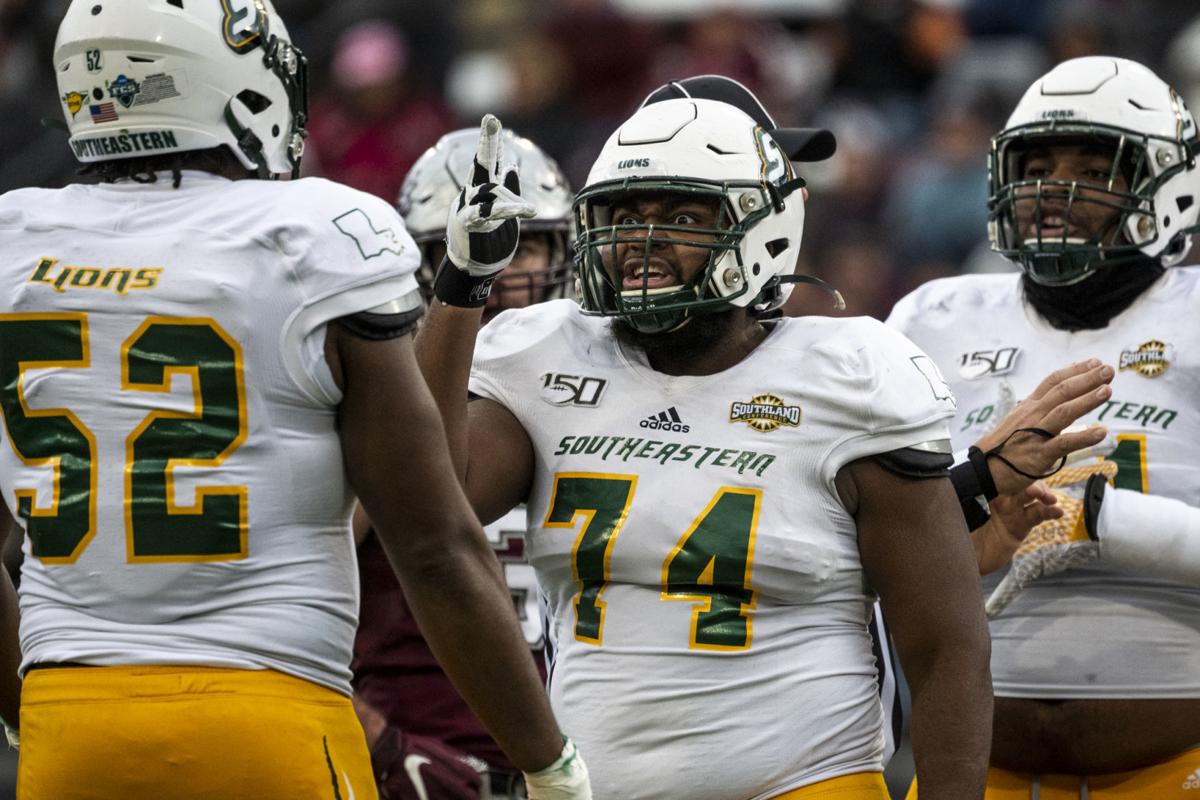 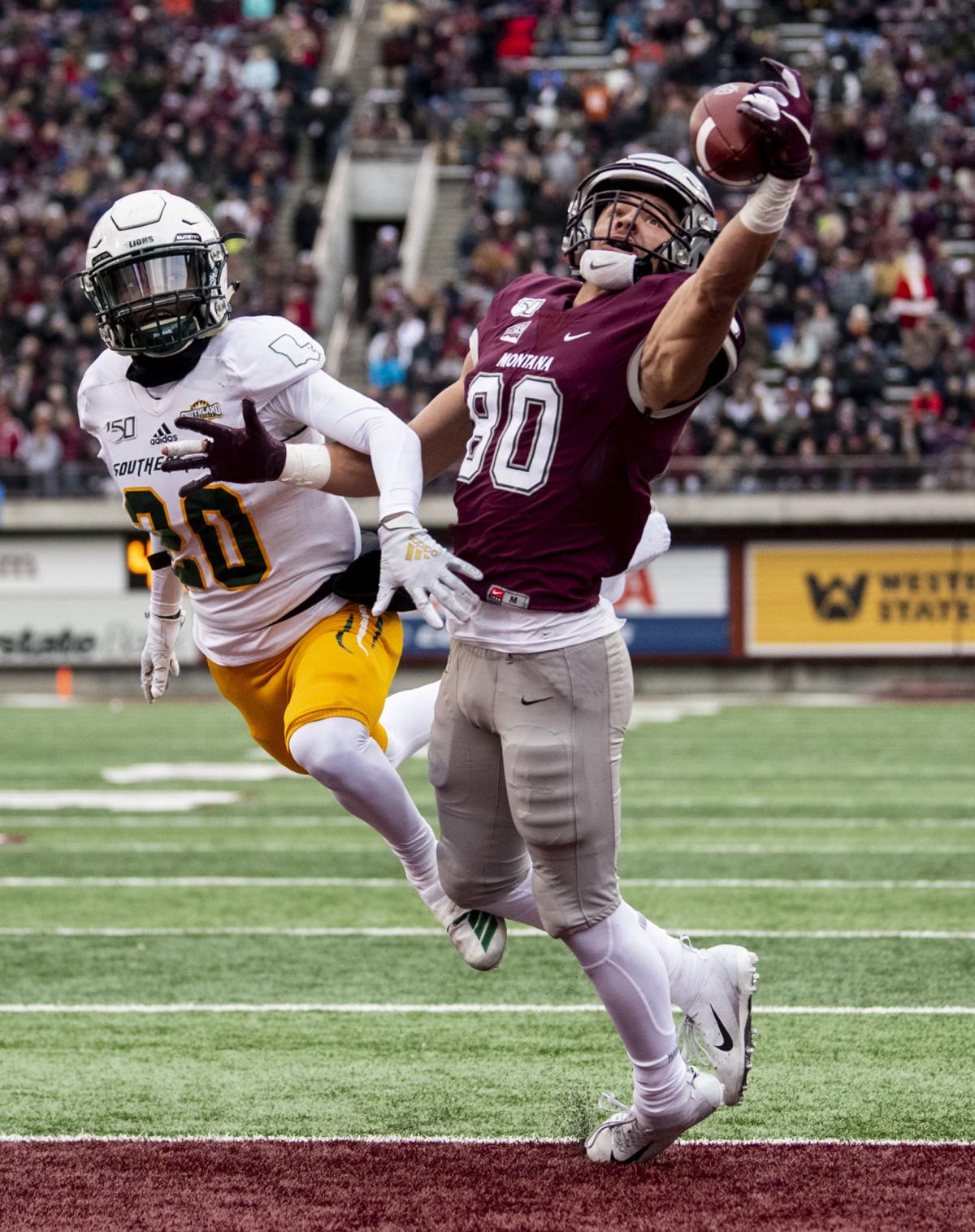 Montana's Mitch Roberts (80) tries to a catch a pass in the end zone ahead of Southeastern Louisiana's Dontrell Smith (20). The pass fell incomplete. 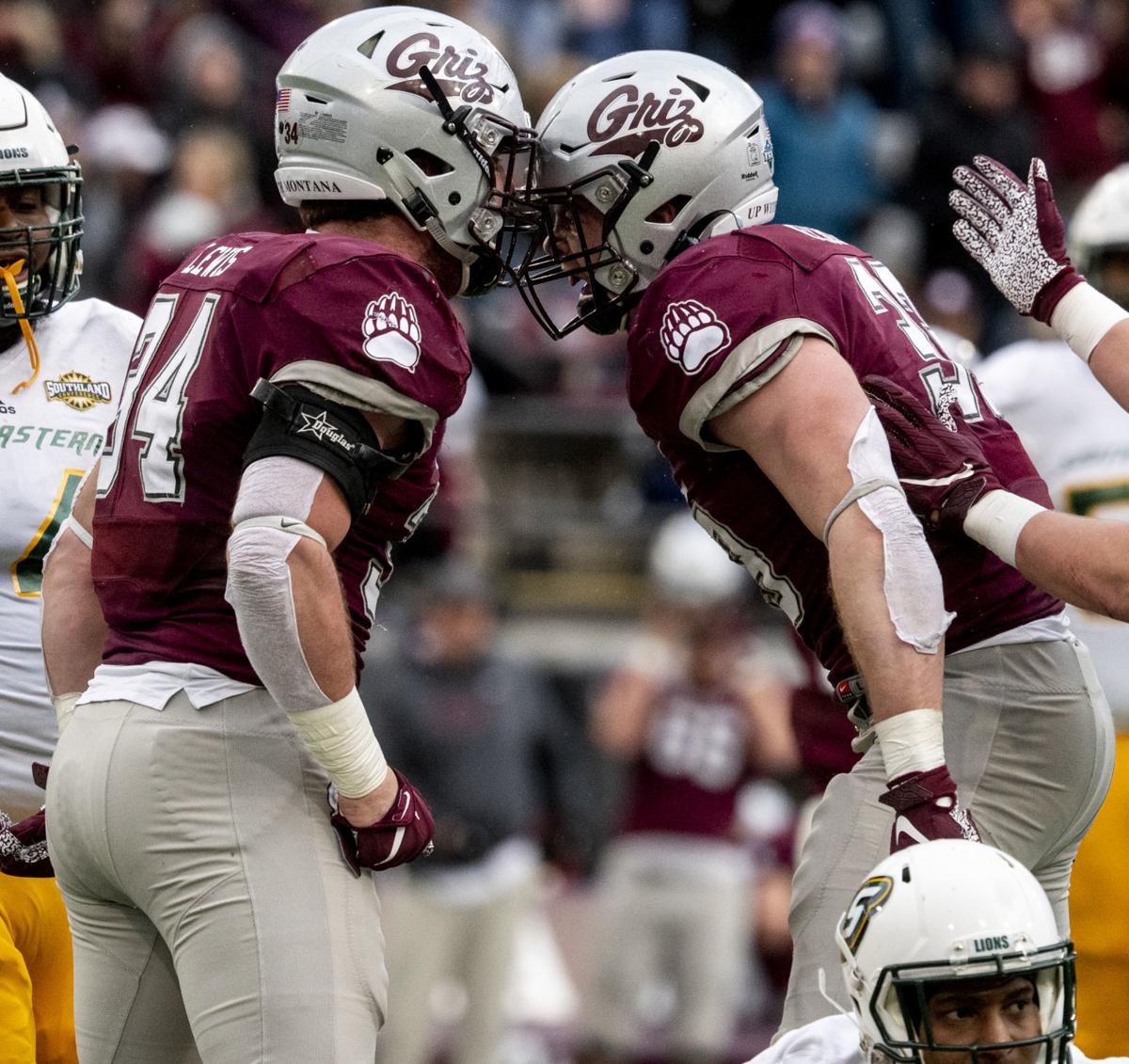 Montana's Samori Toure prances into the end zone at Washington-Grizzly Stadium on Saturday.

Montana's Mitch Roberts (80) tries to a catch a pass in the end zone ahead of Southeastern Louisiana's Dontrell Smith (20). The pass fell incomplete.

MISSOULA — Montana decided sometime Wednesday or Thursday that its first snap against Southeastern Louisiana was going to be a deep shot to Samori Toure if it got the right look from the defense.

Griz quarterback Dalton Sneed got the signal Saturday afternoon, lofted a deep pass and Toure hauled in a 62-yard touchdown reception to kick-start what turned out to be a record-breaking day in front of an announced crowd of 16,550 at Washington-Grizzly Stadium.

Montana racked up season-high totals for yards and points in a 73-28 victory over Southeastern Louisiana in the second round of the playoffs. The Griz moved on to the quarterfinals for the first time since 2009 and will play on Friday night at Weber State, a team they beat on Nov. 16 in Missoula.

“I know that our group had not played a playoff game before, but they looked like veterans and handled all that really well,” Montana coach Bobby Hauck said. “I’m proud of our team. Certainly, the effort level, the plays that were made today offense, defense, special teams, we looked like a good college football team.”

Toure took center stage again in his resurgent season after a sophomore slump that made him change his jersey number this past offseason. He finished with a school-record 303 receiving yards and three touchdowns on 12 catches, giving him 1,410 yards this season, the third most in a single season in school history, with Marc Mariani holding the record of 1,479.

Toure, from Portland, Oregon, also broke the FCS playoff record for receiving yards in a single game, which was set by former Marshall star Randy Moss in 1996 against Delaware.

“That’s surreal just because he’s always been my favorite receiver and my role model growing up,” Toure said. "That definitely means a lot to me. But yeah, right now, I’m just happy that we got this first playoff win out of the way and I’m just excited to see what’s next for our team.”

Sneed found Toure and others on a regular basis, completing 29 of 45 passes for a career-high 459 yards and five touchdowns, which tied his career best. He also found a reliable target in Mitch Roberts, who caught nine passes for 85 yards and one score.

Montana racked up 600 yards of offense despite being unsure of what the Lions’ defense was going to present in terms of coverage, Hauck said. He credited the versatility and veteran stature of the offense with being able to pull that off. It also helps that Sneed had another week to rest his ankle following his return on Nov. 9 from his injury on Oct. 19.

“You don’t throw for that many yards without being sharp,” Hauck said. “It’s good to have our quarterback back closer to 100% than he’s been since the middle of October. So, Dalton had a good week of practice this week. When he practices the way he did, he usually plays well, which he did today.”

While Sneed still didn’t scramble like he had before the injury, he showed movement in the pocket and pointed to his offensive line not allowing a sack as what let to the record-breaking day. It’s just the second time this season the Griz haven’t allowed a sack.

“I know (Toure) got that record today and I’m sitting here and we’re talking about how many yards I passed for, but zero sacks, that’s the highlight of the day for me,” Sneed said. “It’s because of the offensive line and the great job they did. … It was a tremendous job by them.”

Sophomore running back Marcus Knight got in on the record-breaking day, too. He scored four touchdowns — three rushing and one receiving — to set school records with 25 total touchdowns and 23 rushing scores, breaking marks held by Chase Reynolds since 2009.

Knight finished the day with 75 rushing yards on 16 carries, giving the junior college transfer 1,005 rushing yards in his first season with the Griz.

“Marcus has been great,” Hauck said. “He’s made a lot of progress as a player. He’s just a sophomore. I can obviously remember when Chase set that record in 2009. That was a big year for him. It was pretty impressive to go by that. Good for Marcus. Good job by a lot of people helping him do that.”

The Griz defense limited the Lions to 28 points despite giving up 489 yards. Quarterback Chason Virgil completed 36 of 59 passes for 436 yards with four touchdowns and one interception, a 47-yard pick-6 by true freshman Corbin Walker. Montana’s Eli Alford also recorded a safety.

Toure’s 62-yard touchdown answered the Lions’ 29-yard touchdown catch by Javon Conner on their first drive, which was extended by a penalty for roughing the punter. Montana added 17 more points as Brandon Purdy hit a 32-yard field goal — the first by a Grizzly in Missoula in December since 2009 — Knight ran for a 4-yard score and Mitch Roberts caught a 15-yard touchdown pass to give Montana a 24-7 lead.

It was a simple plan of taking what the defense gave them.

“They mixed it up,” Sneed said. “Any time they’d back off, we’d take the easy throws. Any time they wanted to come up, we’d go over the top.”

The teams then combined for 28 points in the final 2:05 of the of the first half. The Lions scored on a 12-yard touchdown reception by tight end Bransen Schwebel, but Montana’s Malik Flowers recaptured the momentum with an 81-yard kickoff return touchdown. Lions receiver Javon Conner then caught a 52-yard pass and Knight added a 7-yard scoring catch.

“I think over the entirety of the season our team’s been pretty exemplary in the area of clock management,” Hauck said. “That was a good job today taking that down and getting the touchdown with eight seconds left. We’re well practiced at it. Our guys handle it really well. Our coaching staff’s all on the same page. Our clock management’s been excellent all season long, and that’s a good example of it.”

The Griz took control from there, scoring the final 28 points against a team that rallied from a 17-point halftime deficit in the first round of the playoffs. Knight had scoring runs of 7 and 9 yards, Toure caught a 47-yard touchdown pass, Alford recorded the safety and Walker had the pick-6.

The No. 6 Montana Grizzlies host Southeastern Louisiana in the second round of the FCS playoffs at Washington-Grizzly Stadium.