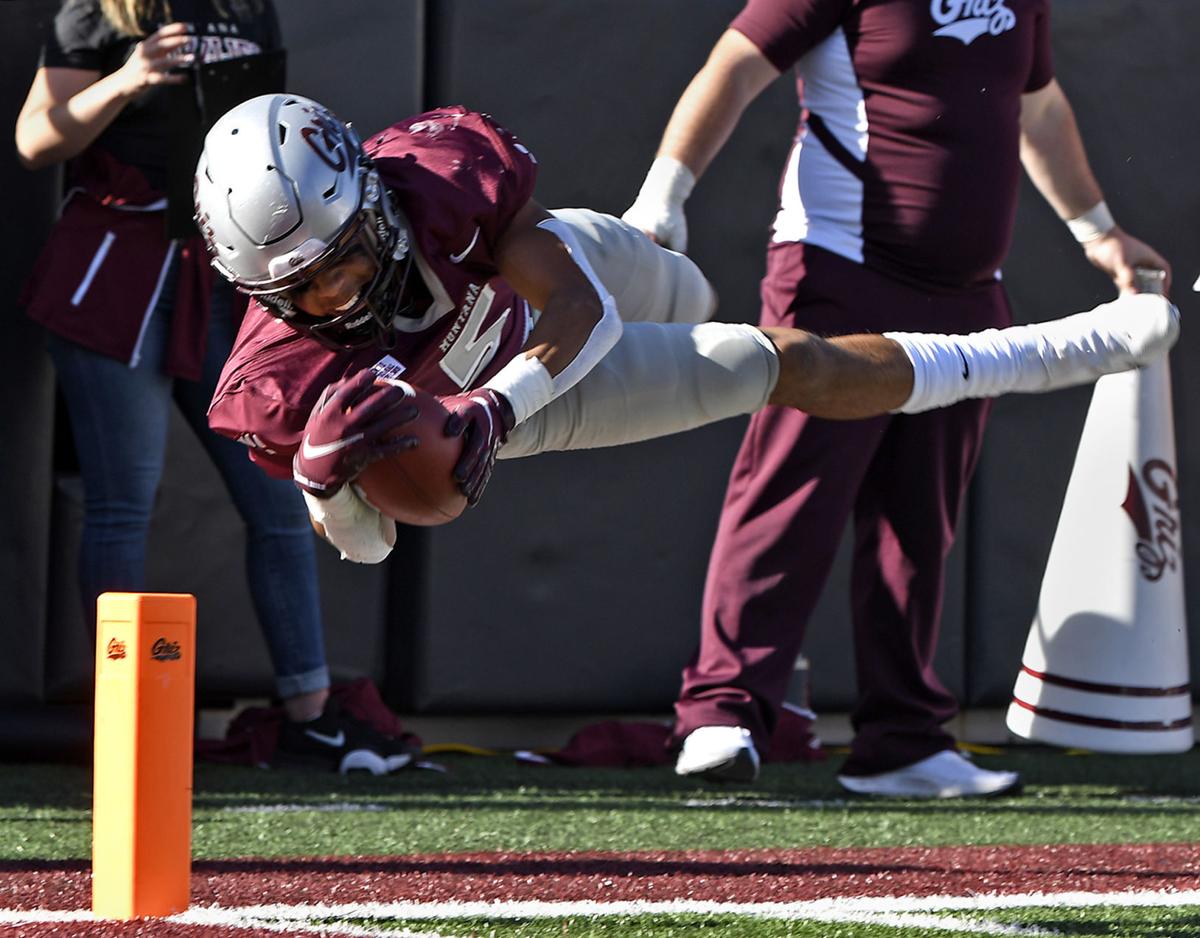 Montana running back Junior Bergen flies out of bounds just shy of the goal line during the Grizzlies' game against Sacramento State on Saturday at Washington-Grizzly Stadium. The Hornets won, 28-21. 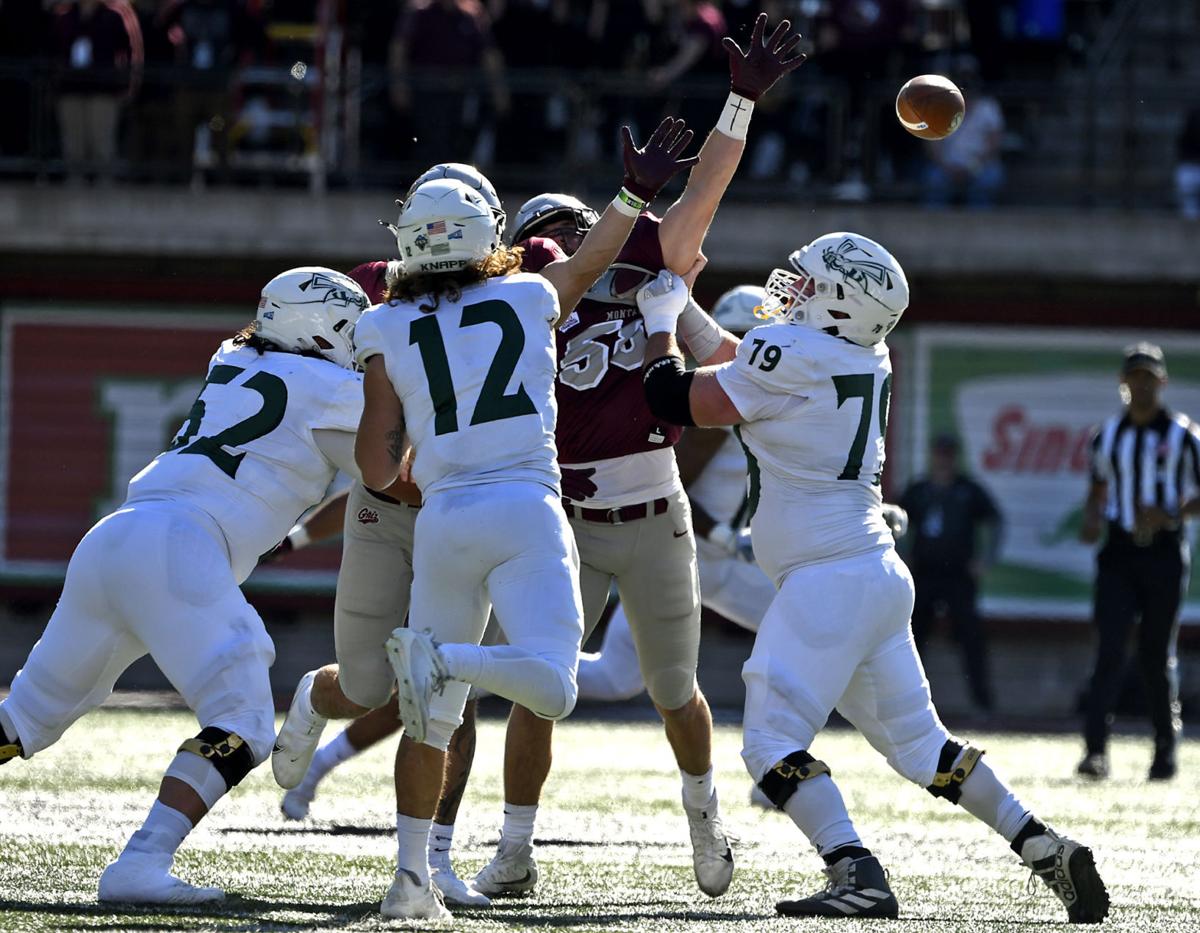 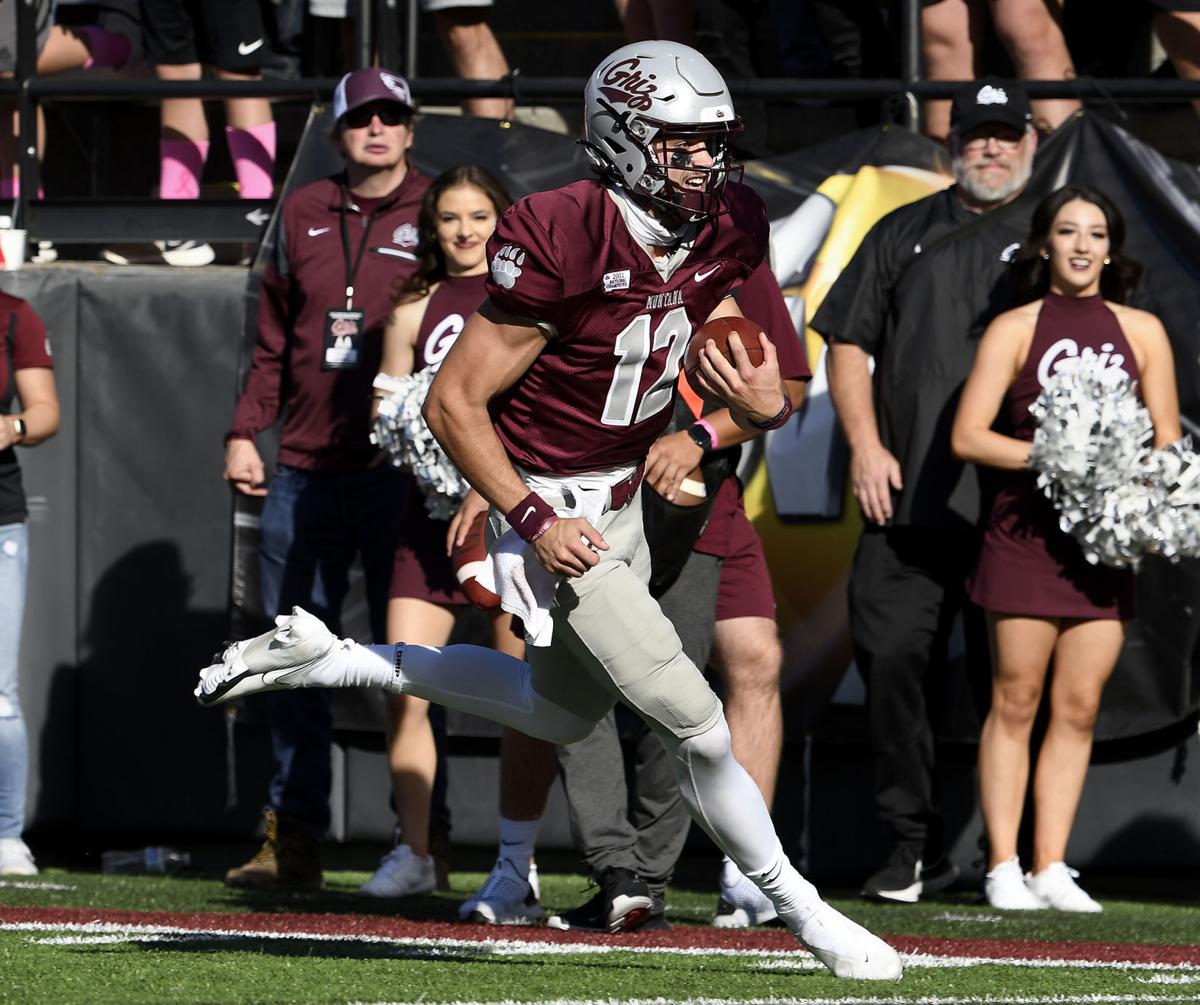 Montana quarterback Kris Brown rushes for the first of his two touchdowns against Sacramento State on Saturday. 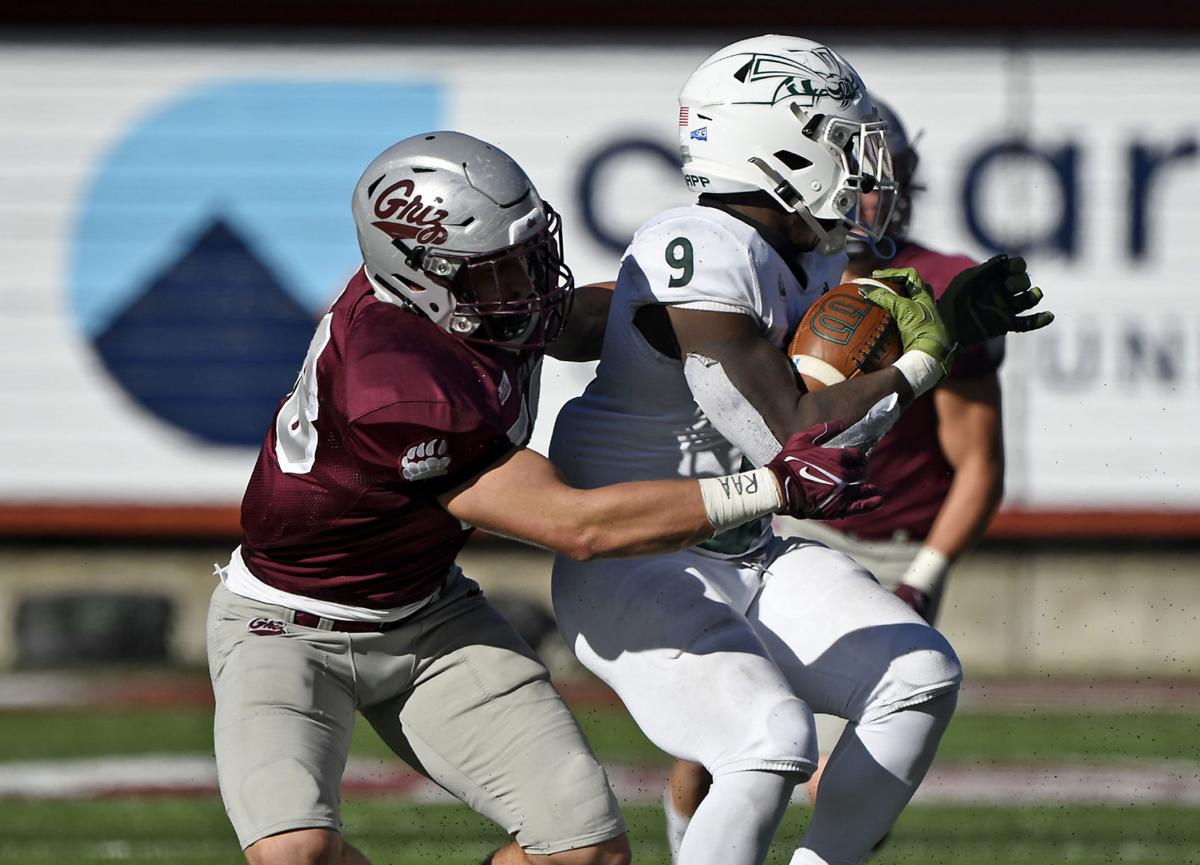 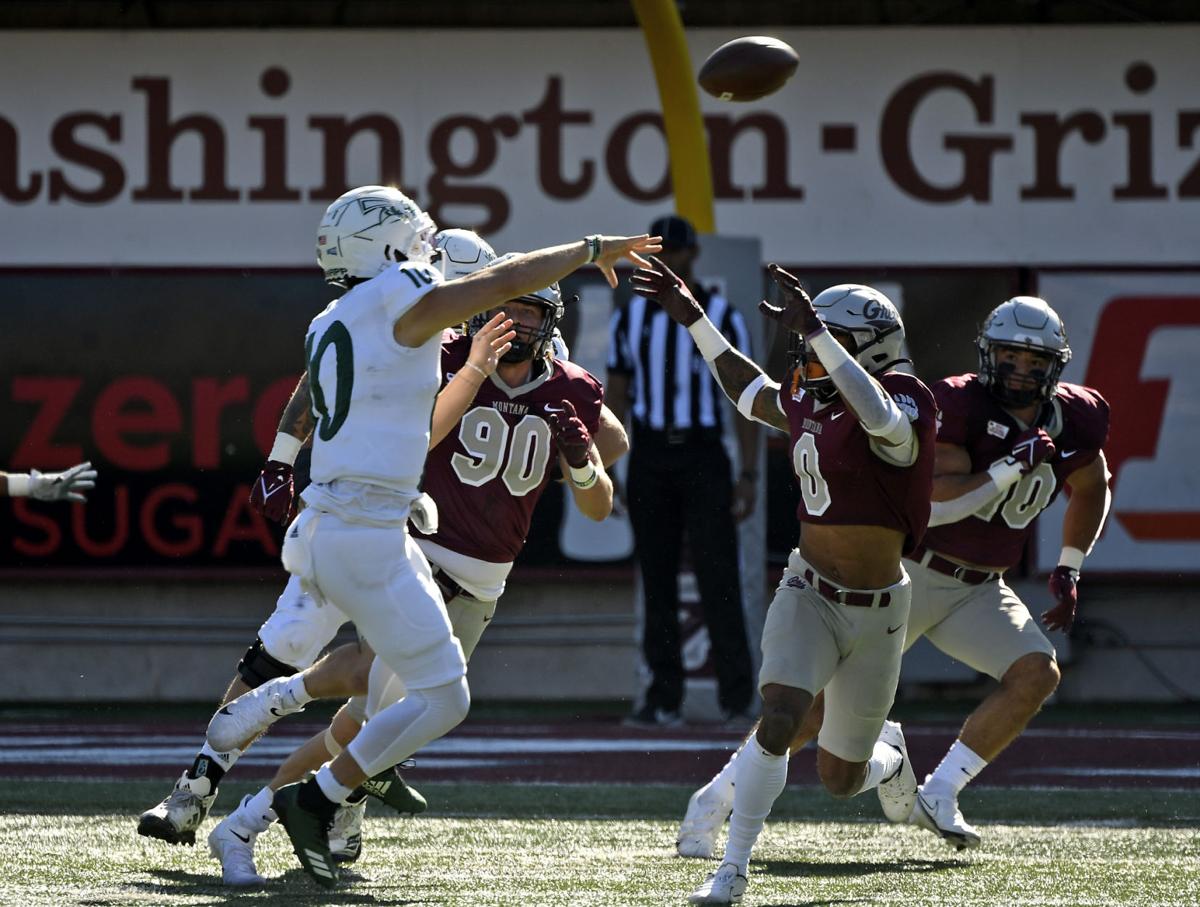 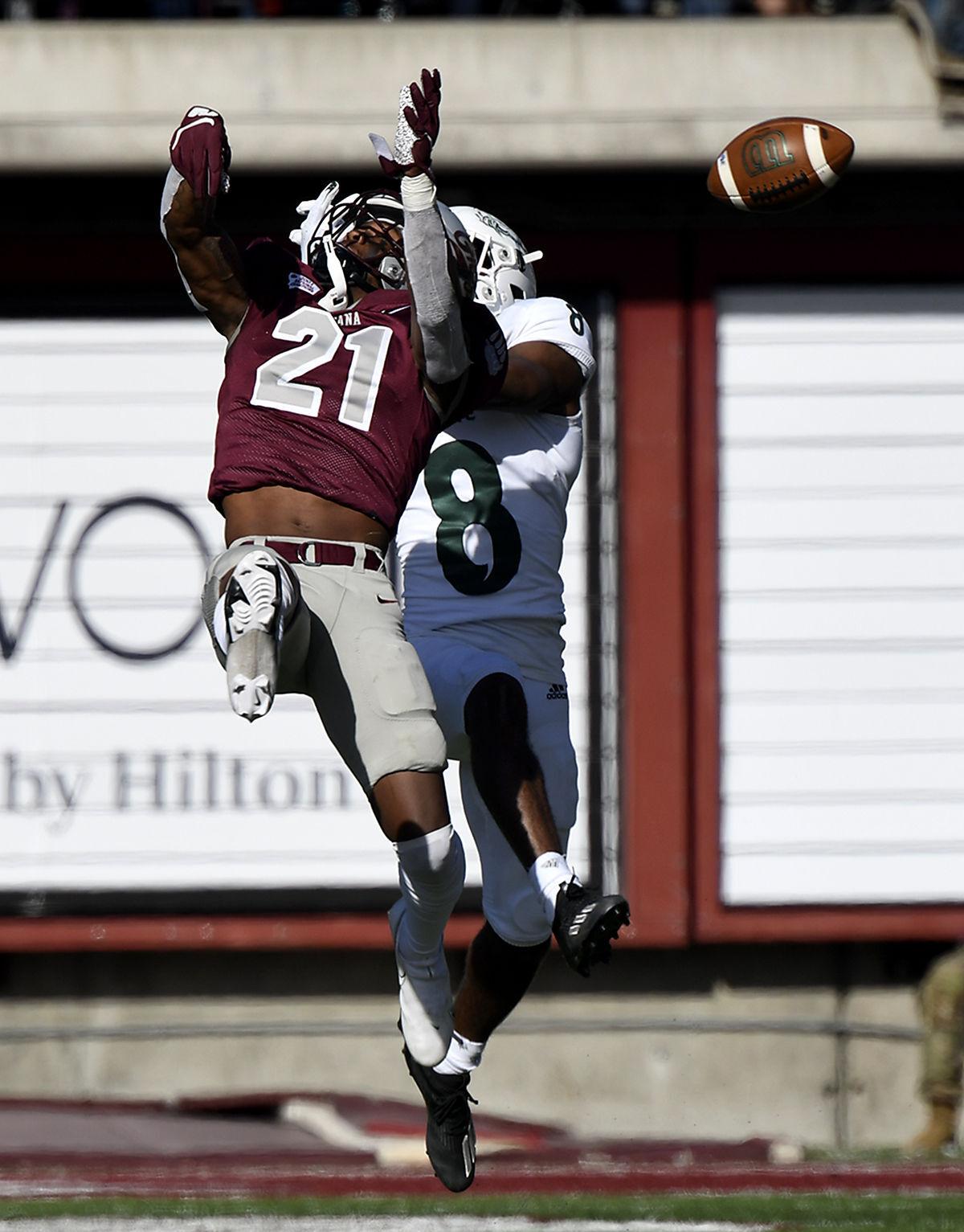 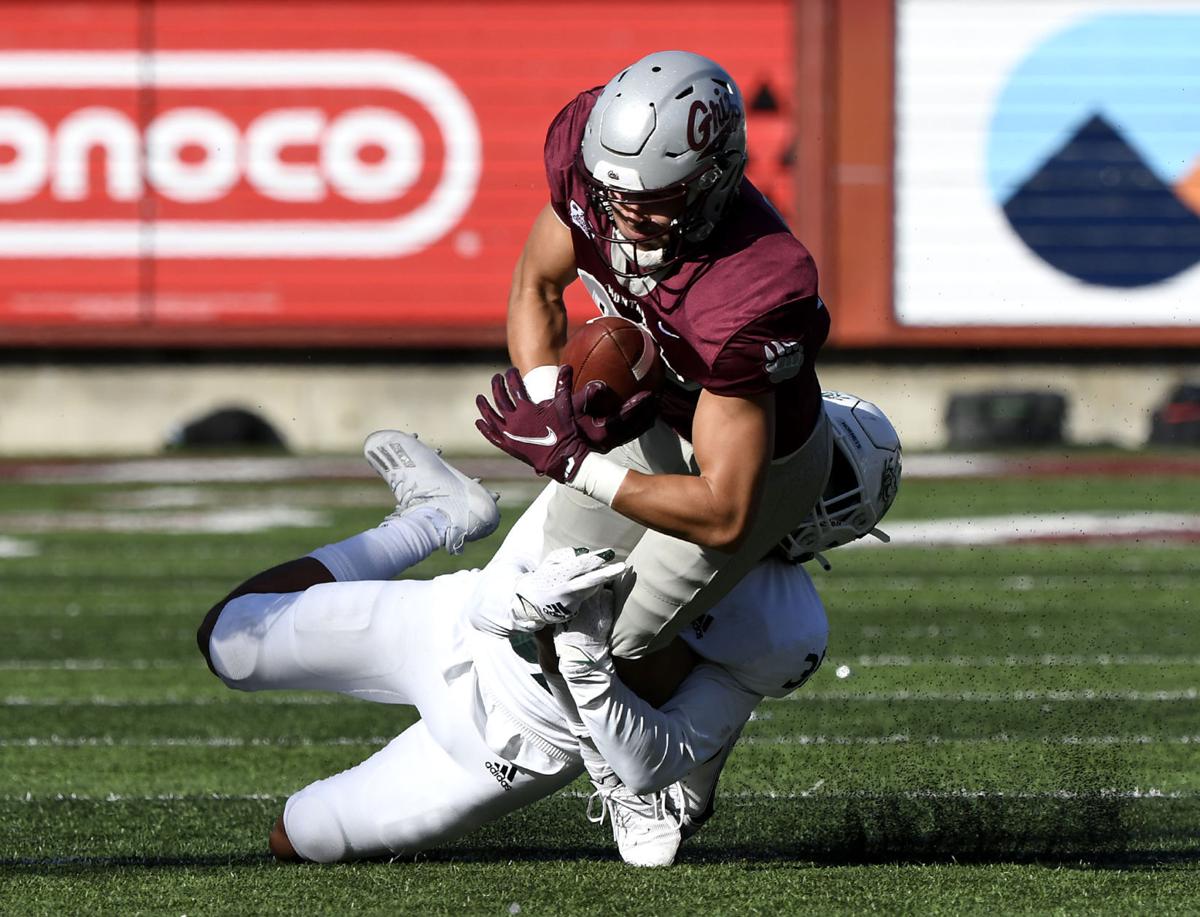 Montana running back Junior Bergen flies out of bounds just shy of the goal line during the Grizzlies' game against Sacramento State on Saturday at Washington-Grizzly Stadium. The Hornets won, 28-21.

Montana quarterback Kris Brown rushes for the first of his two touchdowns against Sacramento State on Saturday.

MISSOULA — Montana was just about to squish the Hornets.

The Griz recovered a muffed punt at Sacramento State’s 14-yard line and were poised to tie the game, setting up a potentially exciting close to the fourth quarter Saturday at Washington-Grizzly Stadium. Then Marcus Hawkins stepped in front of what looked like a sure touchdown pass from Kris Brown to Sammy Akem and intercepted the pass.

It was the biggest momentum swing in a game full of turning points. It also was a microcosm of the Grizzlies’ offensive struggles as they failed to convert the three turnovers they forced into points and finished their four red-zone trips with just 14 points.

UM’s lack of offensive execution reared its ugly head yet again this season, and this time it stung the fifth-ranked Griz worse than before. Their 28-21 loss dropped them to 4-2 overall and 1-2 in the Big Sky as their 12-game home wining streak was snapped. The Hornets improved to 1-12 all-time in Missoula.

Dreams of winning a Big Sky title already required help after a loss at Eastern Washington two weeks ago and may now be out of reach with EWU and Montana State at 4-0 and Sacramento State at 3-0. Even getting a playoff seed as an at-large bid may require winning out.

“We have not been able to capitalize,” Montana coach Bobby Hauck said plainly. “You get presented opportunities in games to either do or don’t, and they did more than we did.”

While fans had been clamoring through the first three games for Brown, the redshirt freshman from Bozeman, he and the offense were met with multiple choruses of boos. The Griz were held without a first-half touchdown for the second straight game and third time in six games.

Brown committed two more turnovers, giving him five through his first three career starts: two interceptions and four fumbles, three of which he lost. He finished 29-of-36 passing for 188 yards, but he didn’t have a completion longer than 16 yards, which came on a swing pass, as the Hornets gave him the underneath routes to prevent big plays.

“The ball goes where it goes,” Hauck said. “The guy has his reads back there, and he throws it where he thinks he should. We’ll go through that with a fine-toothed comb tomorrow and see what we thought of the decision making.”

Senior quarterback Cam Humphrey went through pregame warmups for the first time since injuring his right ankle Oct. 2 at EWU, which Hauck said was to “see how he could do.” Humphrey didn’t play, and while he’s dealt with his own struggles, he at least brings the veteran presence of someone who’s been in college for six seasons.

When Brown was sacked on the Grizzlies’ final two offensive plays as they were trying to mount a final-minute comeback, it was emblematic of the type of day the offense had. Brown has been sacked eight times in two games, while Humphrey had been sacked just six times in four games.

“I think generally the protection’s pretty solid,” Hauck said of the O-line. “It’s been pretty good. It’s pretty solid. I think, I’ll have to look at it, but I think sometimes the ball’s either not coming out quick enough or we’re not trusting that protection rather than it being a protection breakdown. Now at the end, there was a couple we got beat.”

Montana managed only 84 rushing yards on 29 carries, an average of 2.9 yards per rush. True freshman running back Xavier Harris finished with six rushes for 13 yards, but his last carry came with 4:10 remaining in the first half as Hauck said that “he was unable to continue.”

Harris’ absence didn’t affect the play calling, Hauck said, but it did leave the Griz with Junior Bergen, a converted wide receiver and fifth-string running back, as their lone ball carrier. He finished with 11 rushes for 47 yards, while Brown chipped in 12 rushes for 24 yards, including touchdown runs of 2 and 23 yards, the latter of which was UM’s longest play of the game.

The Griz had a 67-yard punt return touchdown by Keelan White in the first half called back by a penalty. They made two field goals that half after getting down to the 6-yard line and 14-yard line, the latter coming at the conclusion of a two-minute drill. It was the second time in two weeks they settled for a field goal to end the half, with last week’s being a failed fake field goal run.

“We practice that a lot, you know, so we should be good at that,” Hauck said of the two-minute drill when asked how hard it is for a freshman to operate it. “The one at the end of the first half was pretty good. We got the field goal. … We practice that a lot. I don’t know. I don’t know. Shoot, if I had the answers to some of these questions, we’d be happier right now.”

The Griz trailed 14-6 at the half, but they came into the game having outscored their opponents 333-74 in the second half of games during their 12-game home winning streak. They barely eked out a 15-14 edge Saturday.

“Our team’s resilient,” Sacramento State coach Troy Taylor said. “There were many a times where the game could have turned one way or another, and it did. We talked about playing through the ebbs and flows.”

UM played from behind the whole game after Hornets quarterback Jake Dunniway connected with Chris Miller for a touchdown on the opening drive of the game. He completed 17 of 29 passes for 227 yards, three touchdowns and one interception, hooking up with Jared Gipson for two scores. Quarterback Asher O’Hara ran 17 times for a game-high 72 yards and one score.

The Griz tied the score at 21-21 but then gave up a touchdown on the next drive. It was tough sledding against defensive coordinator Andy Thompson, a former UM linebacker who stifled the Griz while his teammates from the 2001 national title team celebrated their 20th anniversary at the game.

“He’s the smartest football guy that I’ve been around,” Taylor said. “I’ve been around some really, really smart guys, and there’s nobody smarter than him. The plan he put together … he’s as valuable as they get in our program.”

Whoever starts at quarterback next week, they'll have to deal with an opposing crowd. Montana hits the road to play at historical rival Idaho.

Montana is defeated by Sacramento State 21-28 on Saturday at Washington-Grizzly Stadium.

On the weekend they honored their 2001 national championship team, the Grizzlies fell to Sacramento State. Here's what you may have missed fro…

Members of Montana's 2001 national championship team have raised nearly $300,000 for the athletic department ahead of this weekend's 20th-anniversay celebration.