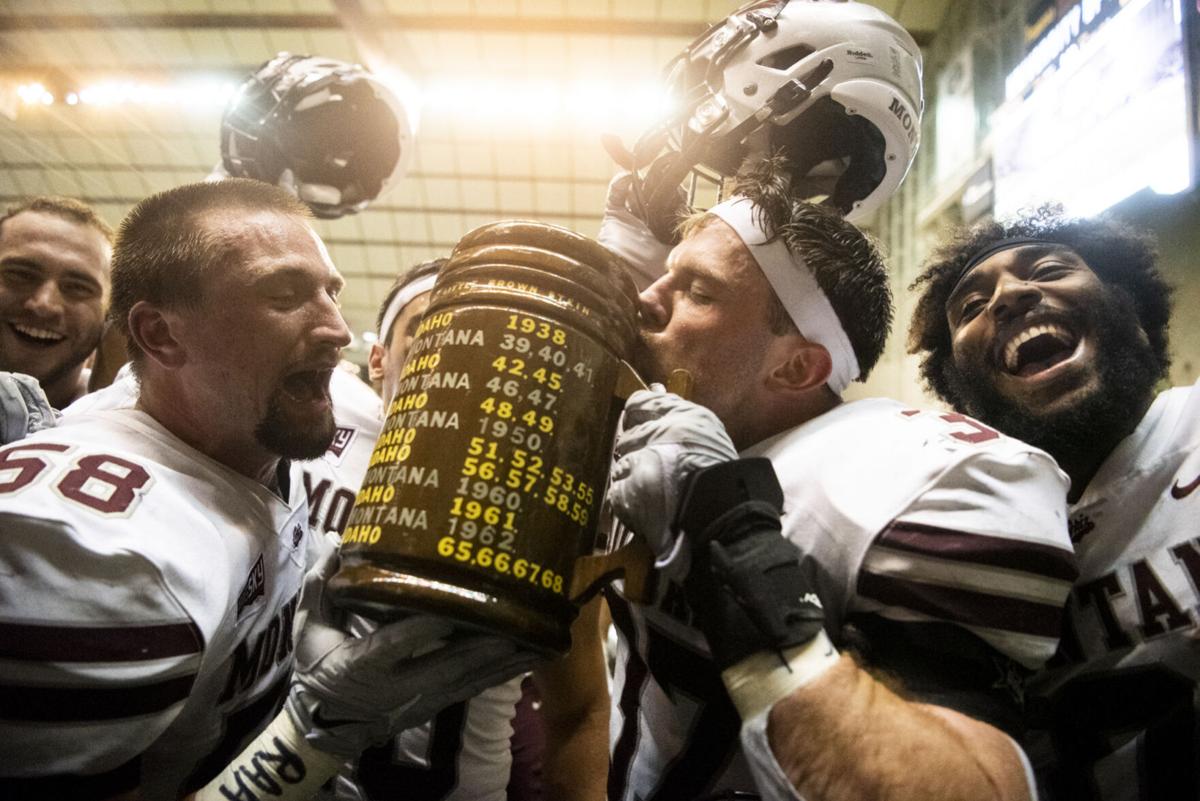 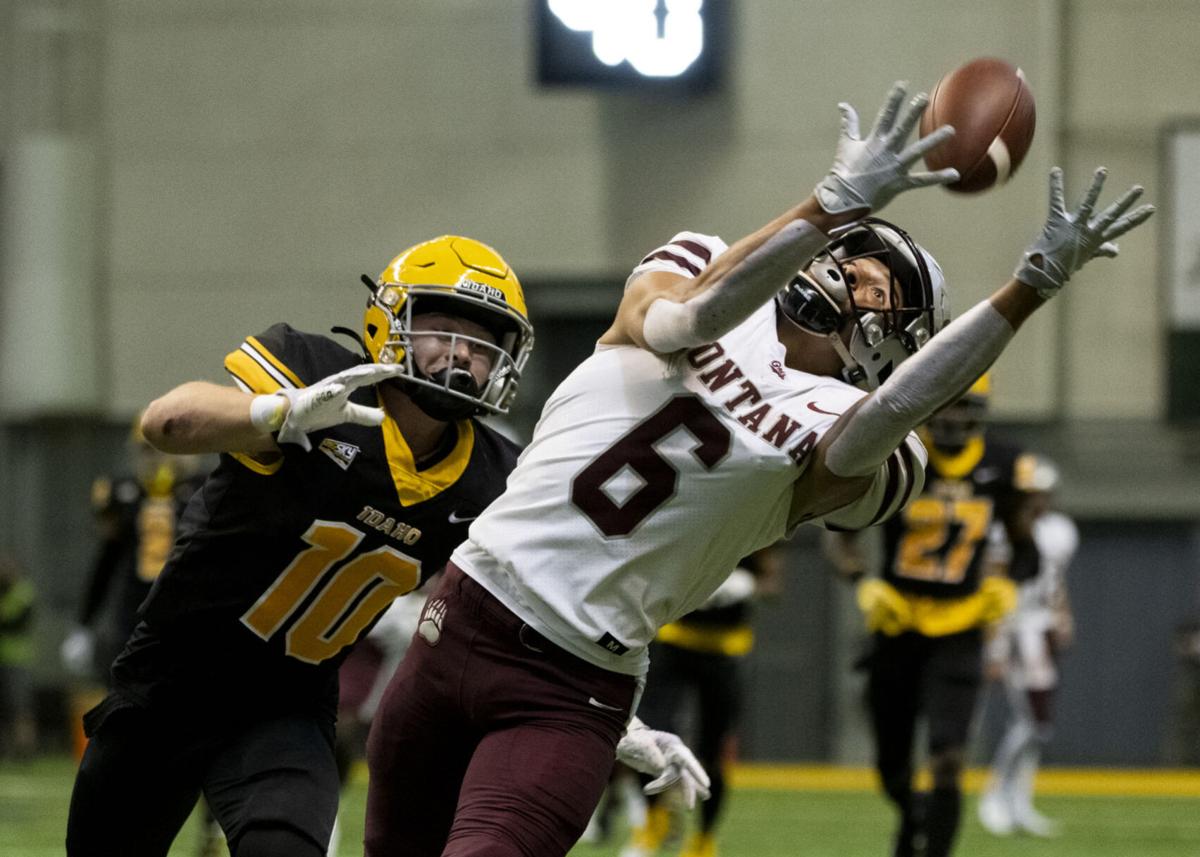 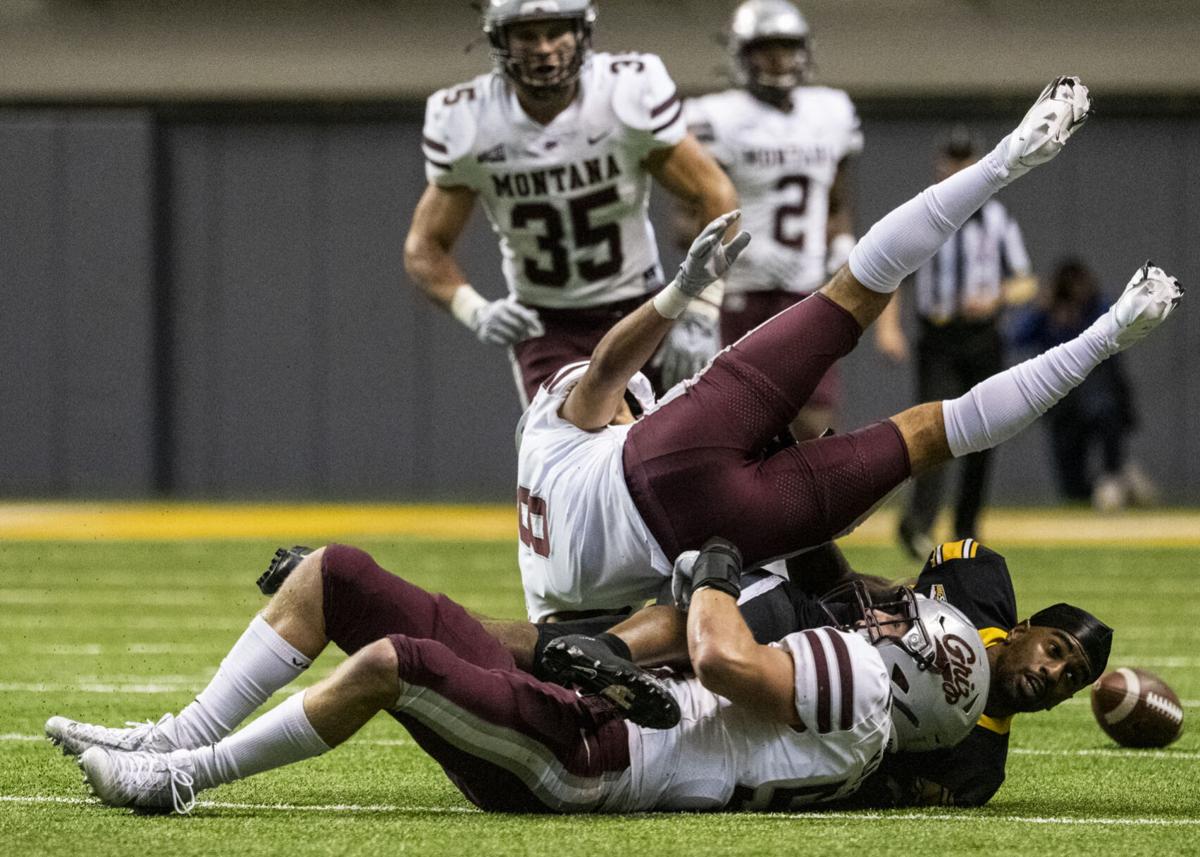 Idaho’s Jermaine Jackson (1) has his helmet knocked off while attempting catch a pass against Montana’s Michael Matthews (52) and Corbin Walker (8). 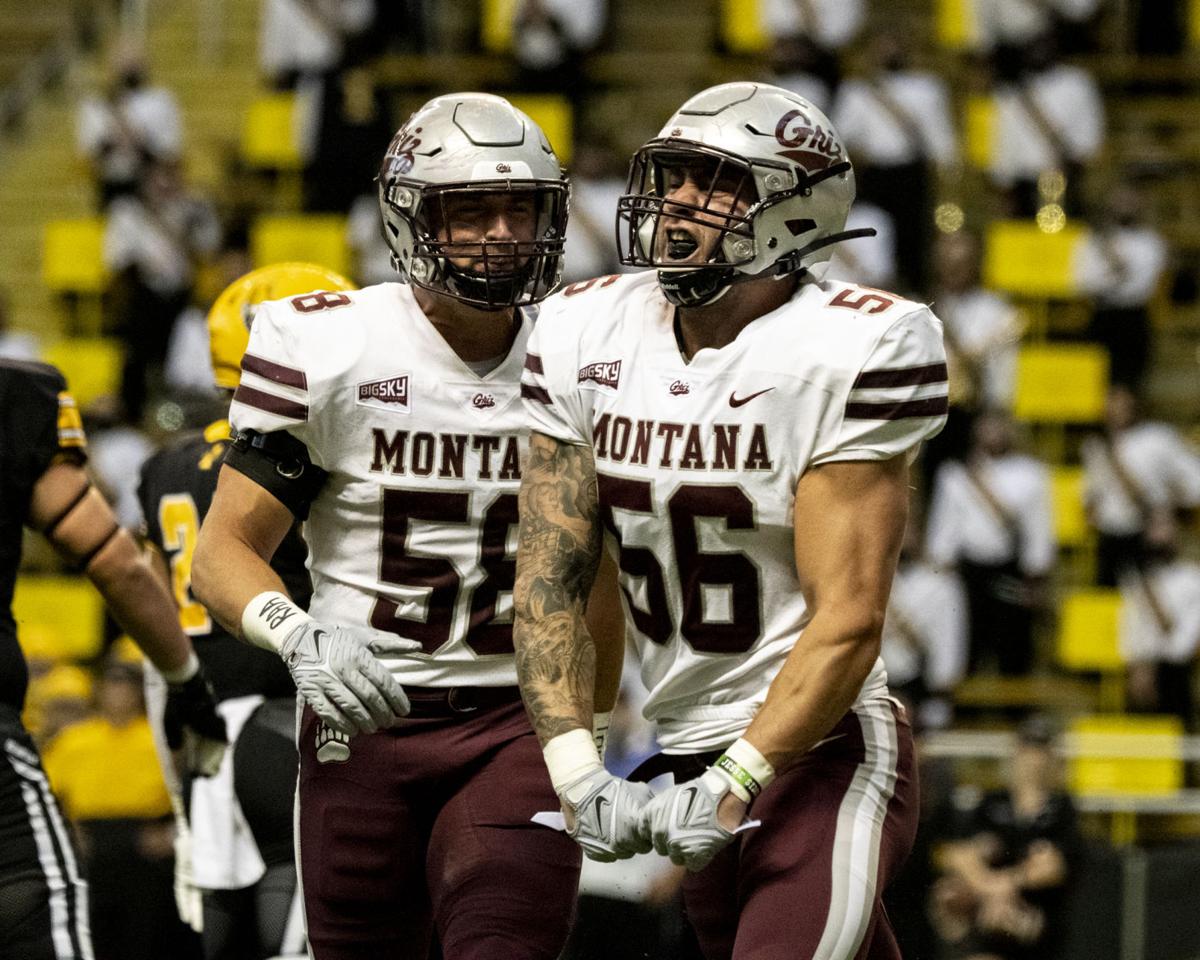 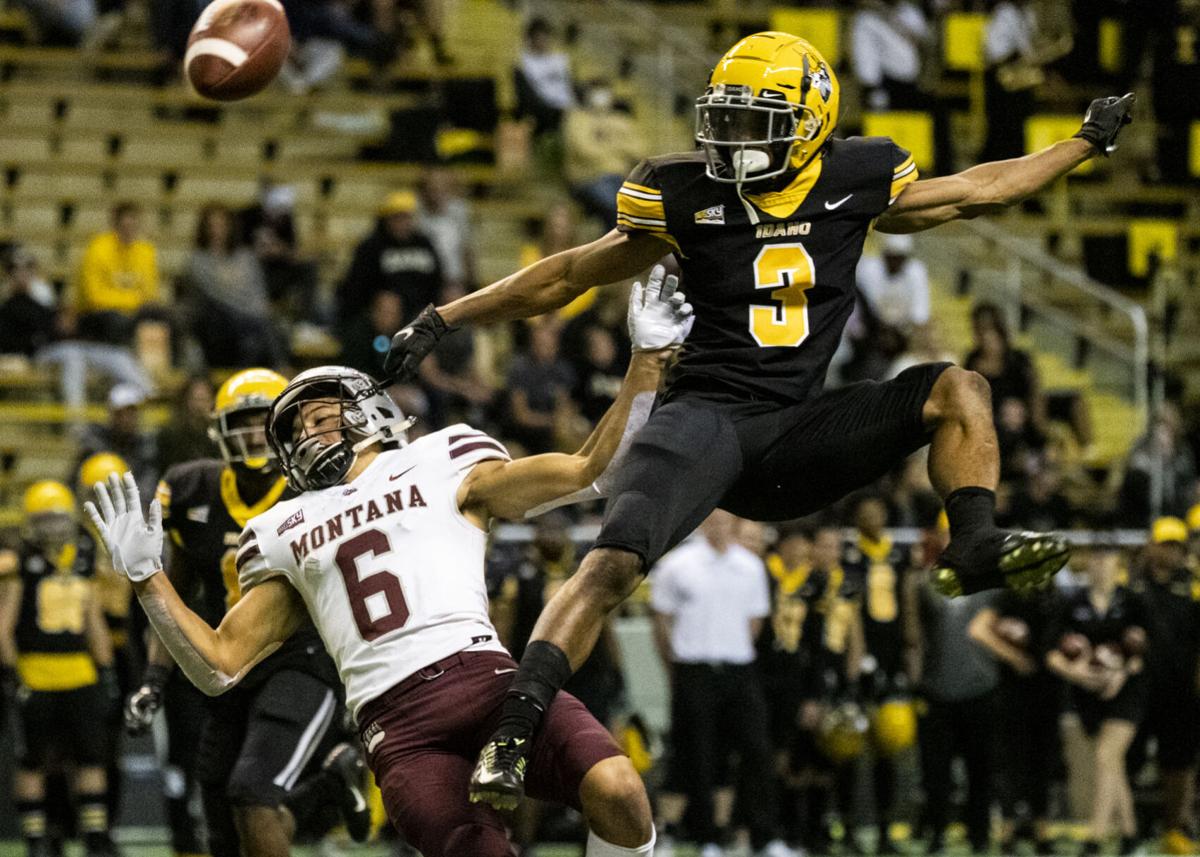 Idaho’s Jeremiah Salaam (3) collides with Montana’s Keelan White (6) while he attempts to make a catch during Saturday's game.

Idaho’s Jermaine Jackson (1) has his helmet knocked off while attempting catch a pass against Montana’s Michael Matthews (52) and Corbin Walker (8).

Idaho’s Jeremiah Salaam (3) collides with Montana’s Keelan White (6) while he attempts to make a catch during Saturday's game.

He mulled over if it was just because Brown has gotten more reps as he made his third career start. He considered if it was that Brown had settled in by connecting on some early passes.

Hauck later mentioned he felt Brown was “really comfortable” with the game plan. He even offered that the Griz changed the plan, seemingly to something better suited for Brown after he had said they didn’t simplify any aspects of the offense when Brown made his first start on Oct. 9.

Whatever the balance was of those and other factors, the Grizzlies’ offense scored its second-most points through seven games as senior quarterback Cam Humphrey was sidelined for the third consecutive game as he recovers from a right ankle injury. They sandwiched all their points between two Idaho touchdowns as they rolled to a 34-14 win at the Kibbie Dome.

In doing that and regaining their early season defensive swagger, the 11th-ranked Griz showed that they’ve far from quit on the season after two losses in the prior three weeks. They improved to 5-2 overall and 2-2 in the Big Sky, tied for fifth in the league behind two undefeated teams and two one-loss teams.

“They went out and executed better than they have in quite some time,” Hauck said. “I’m not sure when the last time we played better than that on offense. So, it was a good effort.”

Brown threw for a career-high 256 yards, the most by a UM quarterback in 2021, fall or spring. The opportunity for such a game looked to be there while facing an Idaho team that entered the game 113th in the FCS by allowing 282.2 passing yards per game

Brown completed only 55.9% of passes (19 of 34), down considerably from 80.6% the previous week, but that was partly because the Griz took deep shots more often instead of settling for short passes near the line of scrimmage. He completed seven passes of 10 or more yards.

Brown’s biggest improvement showed up in the box score by not showing up. He was sacked just once after going down eight times in the previous two games. He also didn’t commit a turnover after he fumbled four times and was picked off twice in those two games.

“I think comfortable consistently through the game rather than in spots would be my assessment just from watching him,” Hauck said of Brown.

Wide receiver Mitch Roberts, a Missoula Sentinel grad, finished with a career-high 145 receiving yards on seven catches. His 70-yard catch-and-run was the Grizzlies’ longest play of the season and set up Brown’s 3-yard touchdown run to put the Griz up 27-7 in the third quarter. He also had a 31-yard grab, the seventh-longest passing play for UM this season.

Wide receiver Sammy Akem caught seven passes for 72 yards, including a 39-yard deep shot that set up a 6-yard touchdown pass to Cole Grossman to give UM a 14-7 lead in the second quarter. That 39-yard reception is tied for UM’s fifth-longest play overall this season.

“I think that was kind of the game plan going in, that we could attack the ball down field more,” Roberts said. “Once we got our run game going as well, our pass opened up quite a bit too.”

The Griz tallied 99 yards and three touchdowns on 33 carries. That came even as they were missing their top four running backs because of injury. They then lost center AJ Forbes on the opening drive, right guard Moses Mallory moved to center and later left with an injury, leaving the Griz with their third-string center and right guard for a brief period before Mallory returned.

True freshman Junior Bergen, a Billings Senior grad, carried the ball 18 times for 77 yards, both single-game highs for the birthday boy in his first start. His 10-yard TD run tied the game 7-7 in the first quarter, and his 19-yard TD run pushed the lead to 34-7 early in the fourth quarter.

True freshman Colter Janacaro, a Missoula Big Sky grad, added 14 yards on four carries. He ran for a 59-yard touchdown run, but it was negated by a penalty.

“Those guys did a good job,” Hauck said. “It’s a physical position. It’s a physical game for true freshmen to be in there. They got a lot of contact. I’m proud of them for owning up to it and performing well.”

As the Griz put together long touchdown drives, they kept their defense off the field and allowed them to rest up. That looked like it might be needed when the Griz allowed Idaho to score on a 2-yard touchdown run by Aundre Carter to open the game.

On the next 14 drives, UM held Idaho to 179 yards as the Vandals went to their fourth-string quarterback after starting the game with their third-stringer. Junior cornerback Justin Ford intercepted a pass for the fifth consecutive game, while senior cornerback Omar Hicks Onu had his first interception with the Griz.

“If you just watch our sideline, watch us on the bench, when they score, we’re going crazy,” UM linebacker Pat O’Connell said of the Griz offense. “When they’re putting those drives together, it feels amazing. I know that those guys are working their tails off to do what they’re doing, so that feels really good, and it’s got to feel really good for them.”

The special teams showed up in the form of senior kicker Kevin Macias making a season-long 48-yard field goal and hitting a 27-yarder, both in the second quarter, to turn a 14-7 lead into a 20-7 advantage at the half.

“I think we’ve got a confident team,” Hauck said. “They showed it tonight.”

On Saturday, Patrick O'Connell and Montana's defense looked much more like the dominant unit they had been the first few weeks of the season.