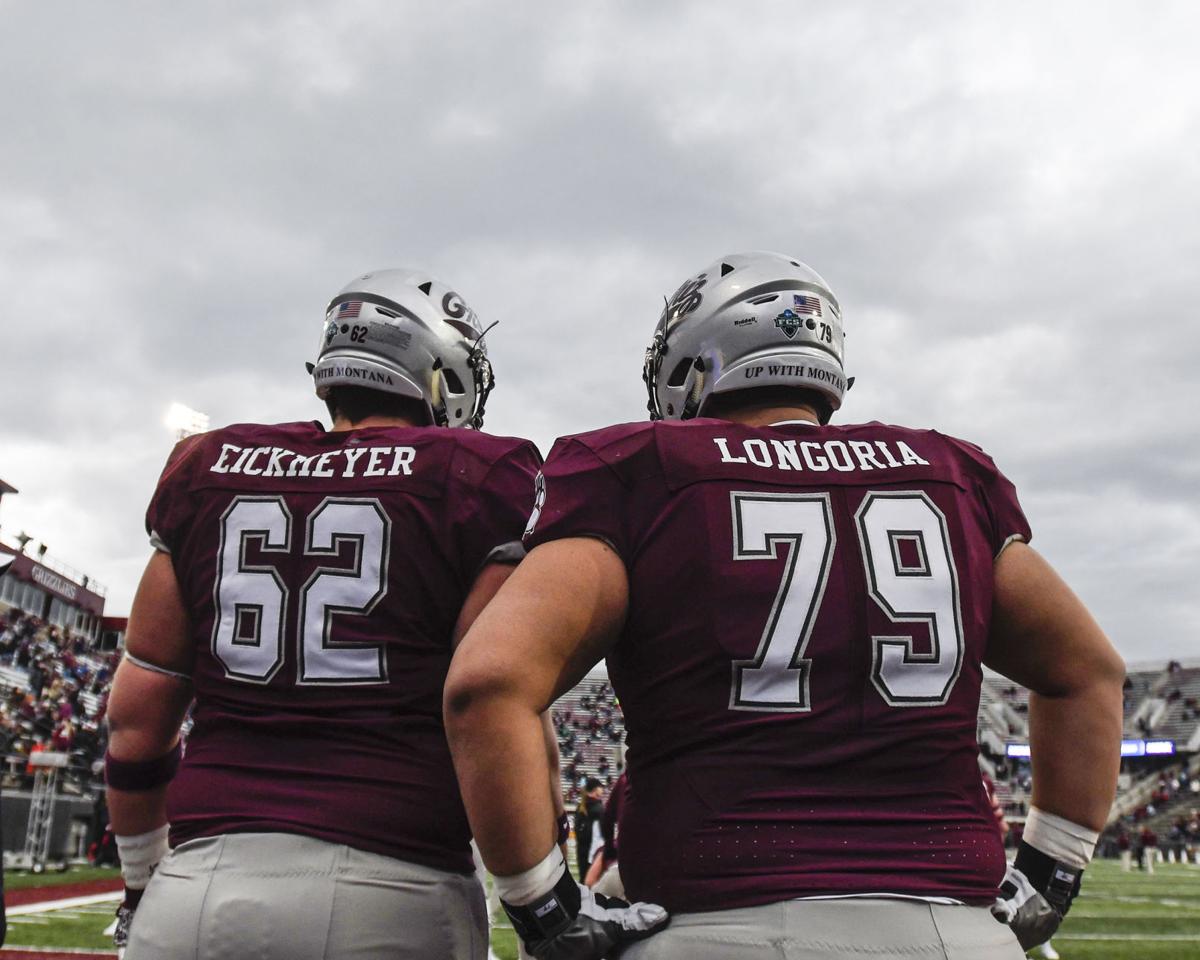 Montana's Dylan Eickmeyer (62) and Esai Longoria (79) stand near each other during warmups before the Grizzlies' FCS playoff game against Southeastern Louisiana at Washington-Grizzly Stadium last week. 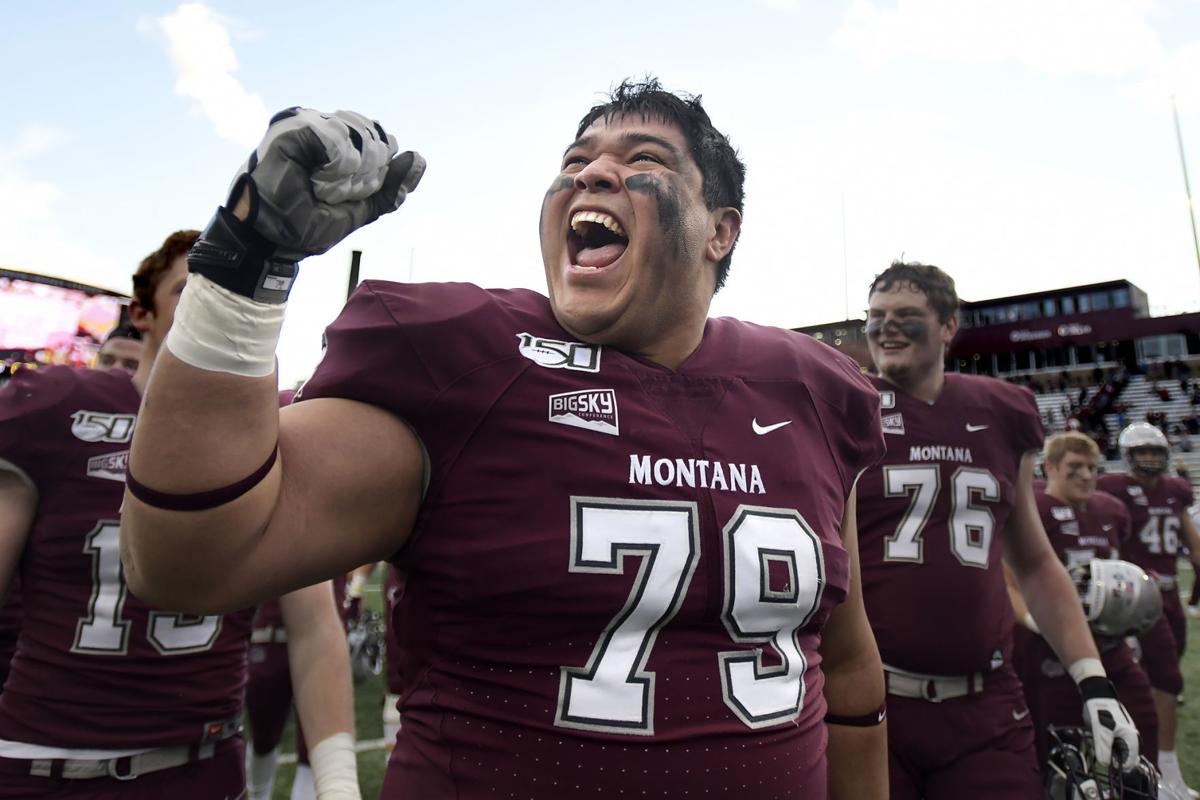 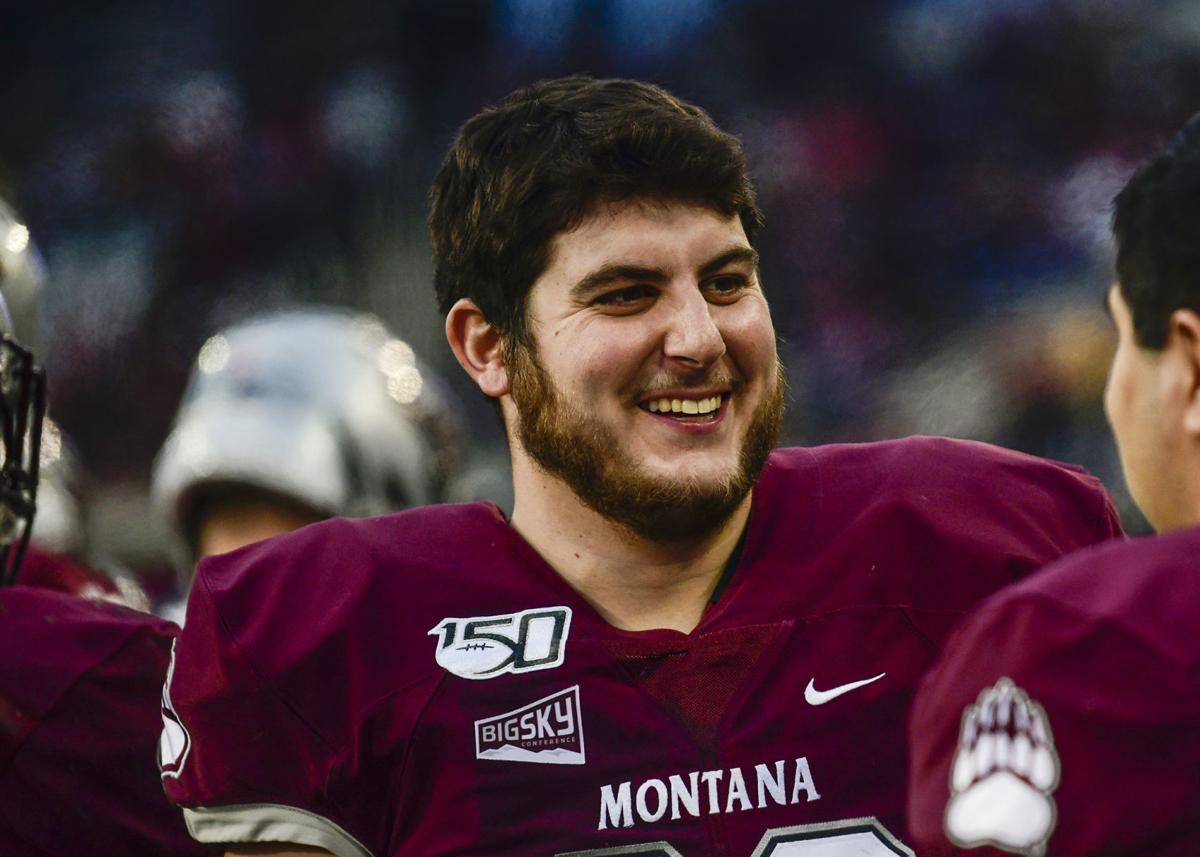 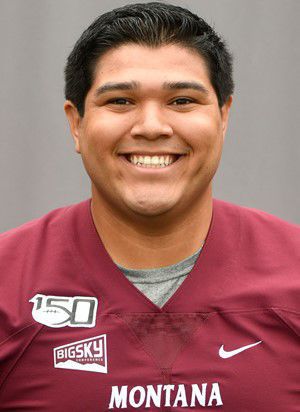 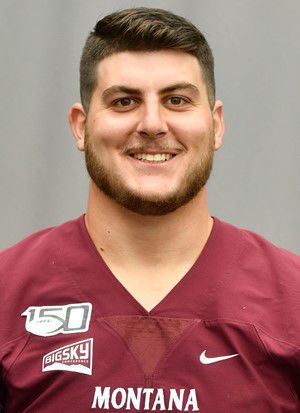 Montana's Dylan Eickmeyer (62) and Esai Longoria (79) stand near each other during warmups before the Grizzlies' FCS playoff game against Southeastern Louisiana at Washington-Grizzly Stadium last week.

Longoria will even go to Eickmeyer’s mom’s Facebook page to find any photo he can of the Griz offensive lineman from when he was a kid, in high school or in college. Longoria will use those photos as the header image on his Twitter page, putting in a new picture about once a month over the past four years.

Eickmeyer knows all about the photos, and the two can’t help but break down laughing when talking about the odd tradition that started when they became good friends at dinner the night before their first day of fall camp as freshmen at Montana.

“He just tries to find the funniest picture of me and puts it on there and texts me to go check it out,” Eickmeyer said. “I think I’ve been his Twitter image since freshman year. It’s too funny.”

“I’ve called him the longest commitment of my life,” Longoria chimed in. “I must have gone through 30 pictures of him at least. The first time I did it, my mom texted me ‘Who’s that guy on your Twitter?’ I had to explain to her it’s just something we goof around with. We get a good laugh out of. I think some guys on the team do, too.”

The friendship between Longoria and Eickmeyer has been persistent for four years, whether it was on the football field, talking about their love of baseball or going fishing.

Their drive to continue playing for the Griz and graduate with their degrees has also been everlasting despite a lack of playing time that could lead others to quitting or transferring. But that’s now how they operate.

“No one should every quit, no matter how much or how little they’re playing,” Montana coach Bobby Hauck said. “That’s a quitter’s mentality. Certainly, those guys don’t have it. Beyond that, they’re loved and respected by their coaches and their teammates. They’re great team members. They’ll do anything they can to help their football team.”

Eickmeyer and Longoria have combined for just three starts and 12 appearances, the latter largely in blowouts across four years in Missoula.

From an outsider’s perspective, they go mostly unnoticed, even by linemen standards, but their impact is well received as leaders on the scout team in practice — Eickmeyer on the offensive line and Longoria back at home on the defensive line.

“They’re both kind of in charge of the fronts,” Hauck said. “When you’re prepping for another team, the look we get from the front on either side of the ball is vital. The freshman don’t understand what it takes.

“So, those two have been very valuable to us in terms of our preparation. They kind of lead the charge.”

Longoria passed up an offer from Washington to come to Montana. It was a baseball scholarship, not a football opportunity, but it was still the Huskies of the Pac-12 reaching out to a kid from Caldwell, Idaho.

When the former power-hitting first baseman decided the day-to-day grind of baseball wasn’t for him his senior year, he soon after accepted a football scholarship from the Griz after visiting campus to watch them host North Dakota in 2015.

Longoria had wanted to quit football and focus on baseball when Washington offered him before his sophomore year, but his dad encouraged him to continue with both sports. It’s that never-say-quit message he’s heard from his parents, sisters and girlfriend that’s helped him stick with Montana despite playing in just seven career games off the bench.

“The amount of support I get from them, I felt an internal feeling to not let them down along with not letting the coaches down because I knew that I couldn’t give up on this,” Longoria said, noting that his dad has missed only one home game in four years and his mom two games. “It was my dream to come up and play here and just be a part of this place.”

Longoria came to Montana as a defensive lineman for former coach Bob Stitt. He redshirted in 2016 and played in one game in 2017 but didn’t collect any stats.

Enter Hauck, who moved Longoria to the offensive line to help a depleted group. He played in just two blowout games, but he continued on with the team, trying to help in any way possible, even at a new position.

“When they asked me to move, I was willing to sacrifice whatever for the better of the team, but it was scary because I didn’t play it in high school,” Longoria said. “In my own head I’m a perfectionist, so what I want to do is be great at what I’m doing.

“So, that was kind of scary because I thought I wasn’t going to be able to be great at it. That first spring, taking it one practice at a time and being coachable really helped me take on the role and help the team in the best way I could.”

Longoria stayed with the offensive line until the second week of this season. The coaches asked him to move back to the D-line to play the role of a North Alabama defender, and he’s stayed there ever since. He’s played in a season-high four games this year, mostly in blowouts but helping on special teams by blocking on field goal attempts.

Longoria will be graduating with a degree in communications and is hoping to get into public relations. He has volunteered at schools back home and served as a pen-pal with kids, he said, enjoying meeting new people, getting to know them and helping them — an opportunity aided by his time at Montana.

“I knew this place was special from the day I got here,” Longoria said. “Every day I wake up, it’s a special place. That was something I could never come to terms with giving up.

“Being surrounded by coach Hauck and all the coaches and just being committed to them and this state and this town, it was something I couldn’t live without. I knew I had to stay and finish out and get my degree and walk across the stage and take our senior day and love just every minute of it.”

Eickmeyer also played baseball in high school, but the New York Mets fan and former catcher wanted to play football. He got that opportunity when Montana offered him after he visited campus for a lineman camp prior to his senior year of high school.

The Tucson, Arizona, accepted the offer from Stitt, redshirted his freshman year and played in two games as a reserve lineman in 2017. When Hauck came in, things began to look up for Eickmeyer. He started in the season opener, a home win under the lights against Northern Iowa.

“Getting to step on the field and play with the guys you work with all year and you work up to that first moment, it’s just something I’ll never forget,” Eickmeyer said. “It was an awesome feeling with it being a night game, too. My parents were in the parent section. It was just awesome for me.”

He started in the next game and in one more game later in the season because of an injury along the line, but those were the only times he saw the field that year. As transfers came in this season and others returned to help the line improve, Eickmeyer hasn’t played this year.

That hasn’t kept him down or taken the smile off his face while talking about his time with the Griz. It’s pushed him to continue battling and trying to improve.

“My parents always said, ‘If you start something, always finish it, never take the easy way out and quit,’” Eickmeyer said. “It’s just ‘Keep your head down and go to work even if things aren’t going your right way because you’re there for a reason and stick it out, finish it out.’”

Like Longoria, Eickmeyer has been on scholarship four years and will be graduating in May. He’s majoring in psychology and is working on a certificate in forensics.

He isn’t sure what the future holds but is enjoying his time with the Griz as it finds down and his journey comes full circle.

“I knew that as soon as I came here, I was going to finish out no matter what,” Eickmeyer said. “For me, it was my word, my commitment. I came here to be a Grizzly, and I’m going to leave here a Grizzly. That’s what I want to do.

“There’s no better place to be in the country with this atmosphere, the support of the coaches and the fans and the guys around you. It’s just an awesome feeling.”