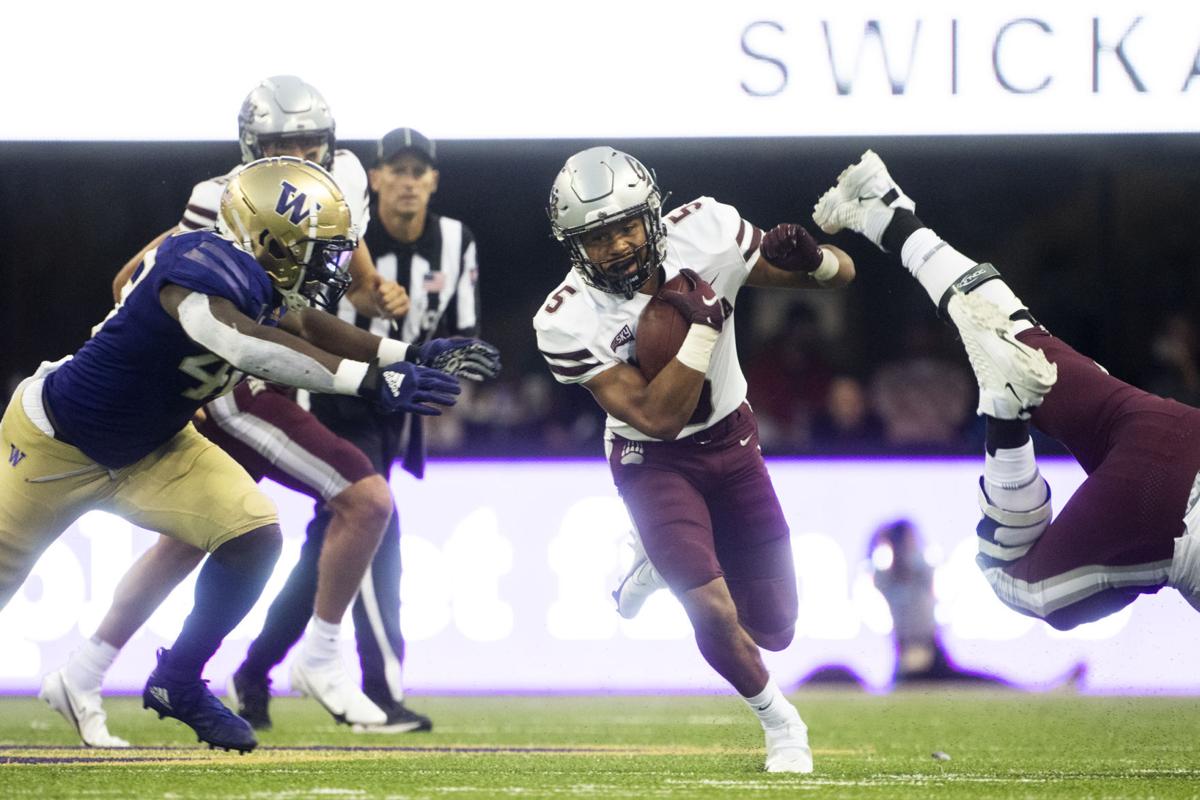 Montana true freshman running back Junior Bergen (5) runs the ball during the Grizzlies' 13-7 win over Washington on Sept. 4 at Husky Stadium in Seattle. The Billings Senior grad is second on the team with 192 rushing yards to go with one touchdown and 54 receiving yards. 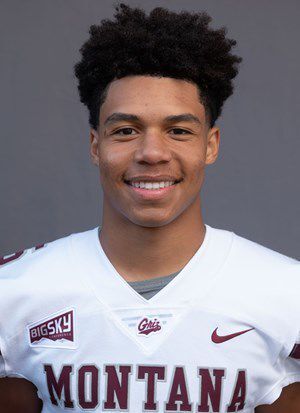 MISSOULA — The simple answer for Montana coach Bobby Hauck was good things might happen if he got the ball in Junior Bergen’s hands.

So, the true freshman from Billings Senior was moved from the loaded wide receiver room to the depth-depleted running back position the week before the season opener after an injury to backup Nick Ostmo. The Griz were already missing All-American Marcus Knight due to an injury in the spring, and Bergen had been an all-state dual threat QB as a high school senior in 2020.

In five games, Bergen is second on the team in carries and rushing yards, is one of five players to score a touchdown on the ground and is coming off a season-high 80-yard outing Saturday. He’s been a key addition after he left Montana State in April following the departure of Cats head coach Jeff Choate and came to UM expecting to play wide receiver, the position where he was all-state twice in high school.

Bergen became the No. 2 option when Xavier Harris, the third stringer elevated to first string, missed the second game of the year with an injury. After Bergen sat out the third game, he was again the second option when Isiah Childs, the fourth stringer elevated to second string, was limited to one play Oct. 2, one play Oct. 9 and no plays Saturday while dealing with an injury.

When Harris left in the first half Saturday for an undisclosed reason, Bergen had to carry the rushing load along with quarterback Kris Brown. He totaled 80 yards on 11 runs and tallied six catches.

Bergen has rushed the ball 45 times for 182 yards and one touchdown this year. He had a season-high 73 yards against Western Illinois and a season-high 14 carries against Dixie State.

Bergen has also caught 10 passes for 54 yards. His six catches for 33 yards against Sacramento State are both season highs.

When Bergen played in his fifth game of the season Saturday, he burned his redshirt. The NCAA recently began allowing players to play in up to four games and still preserve their redshirt.

“I think, generally speaking, true freshmen are just trying to survive,” Hauck said. “They’re trying not to let the team down. When they’re playing, there’s usually some injury or something like that. He’s doing a good job of holding up his end. I’m proud of him.”

Idaho has used four quarterbacks. Senior Mike Beaudry played in the first five games and started three times before missing this past Saturday with an injury. He has 110 of the team’s 163 pass attempts, completing 64.6% of his passes for 155.2 yards per game. He has three of the team’s six touchdown passes and one of the five interceptions. He has 83 yards on 21 runs.

Freshman CJ Jordan also missed Saturday’s game with an injury after starting once and playing four times. He’s completed 14 of 31 passes for 49.5 yards per game with two touchdowns and two picks. He’s run 23 times for 131 yards and one score.

Idaho has a run-first mobile QB, which UM saw for the first time last week. Sophomore Zach Borisch, who started for the second time and played for the sixth time Saturday, leads Idaho and is 10th in the Big Sky with 52.8 rushing yards per game. He’s carried the ball a team-high 59 times and has four rushing scores. He’s just 5-of-8 passing for 104 yards and one touchdown.

Idaho also played freshman Gevani McCoy for the first time Saturday. He completed 7 of 14 passes for 82 yards with two interceptions. He had four runs for minus-1 yard.

“They’re a little bit hard to get a beat on offensively,” Hauck said. “They’ve got a lot of offense, so we’ll have to get into the plan this week and get a good one together.”

He added: “I think it’s a lot based on which quarterback’s in the game. They’re kind of different based on who they play. There have been some games where they had two of them in and then they move them around a little bit. So, try to get a handle on that.”

After facing a Sacramento State team with three assistants who were ex-Griz players, Montana will face another team with multiple coaches who spent time at UM or are from the Treasure State.

Cornerbacks coach Vernon Smith played at UM from 2000-03, spending one season playing for Hauck. He was part of the 2001 FCS title team, was a second-team All-American in 2002 and earned All-Big Sky honors three times.

Defensive coordinator and safeties coach Mike Breske coached at Montana from 2000-02 and 2010-11. In those five seasons, the Griz were the national runner-up in 2000, national champs in 2001, quarterfinalists in 2002 and semifinalists in 2011.

Head coach Paul Petrino was an All-American quarterback at Carroll College. His nephew Kyle Samson played for Hauck’s Griz in 2003 and is currently the head coach at Montana Tech. His cousin Mike Petrino was an assistant coach and interim head coach for the Montana Lady Griz.

Wide receivers coach Tony Spencer played and coached at Carroll College, where he was an All-American defensive back and all-conference wide receiver.

“On their defensive staff, they have some guys that we have really high regard for with Mike (Breske) and (D-line coach) Luther Elliss and Vernon Smith,” Hauck said. “They play really hard on defense. I think they’re very physical. I really like their front seven and what they do. So, they do a lot of good things. They tackle. They’re coached well.”