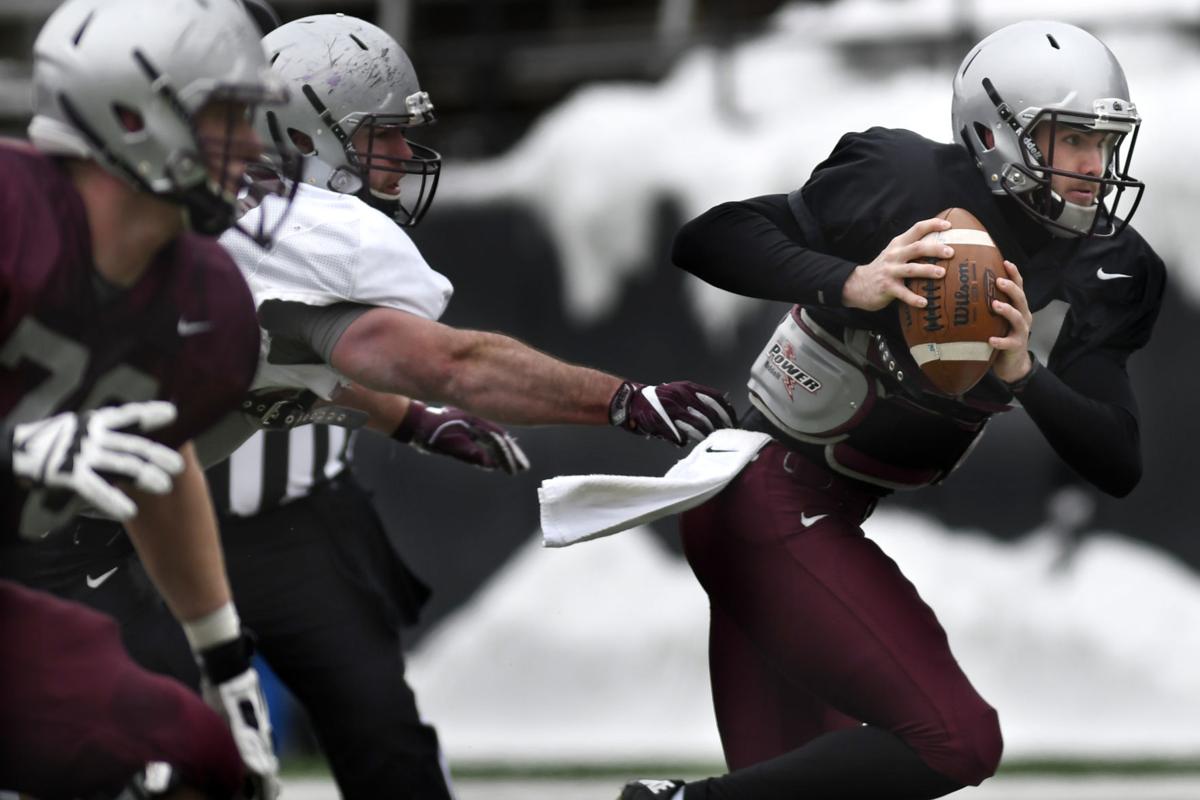 Montana quarterback Dalton Sneed runs with the ball before getting tagged by defensive end Jesse Sims, a Stevensville product, during Friday's scrimmage in Washington-Grizzly Stadium. 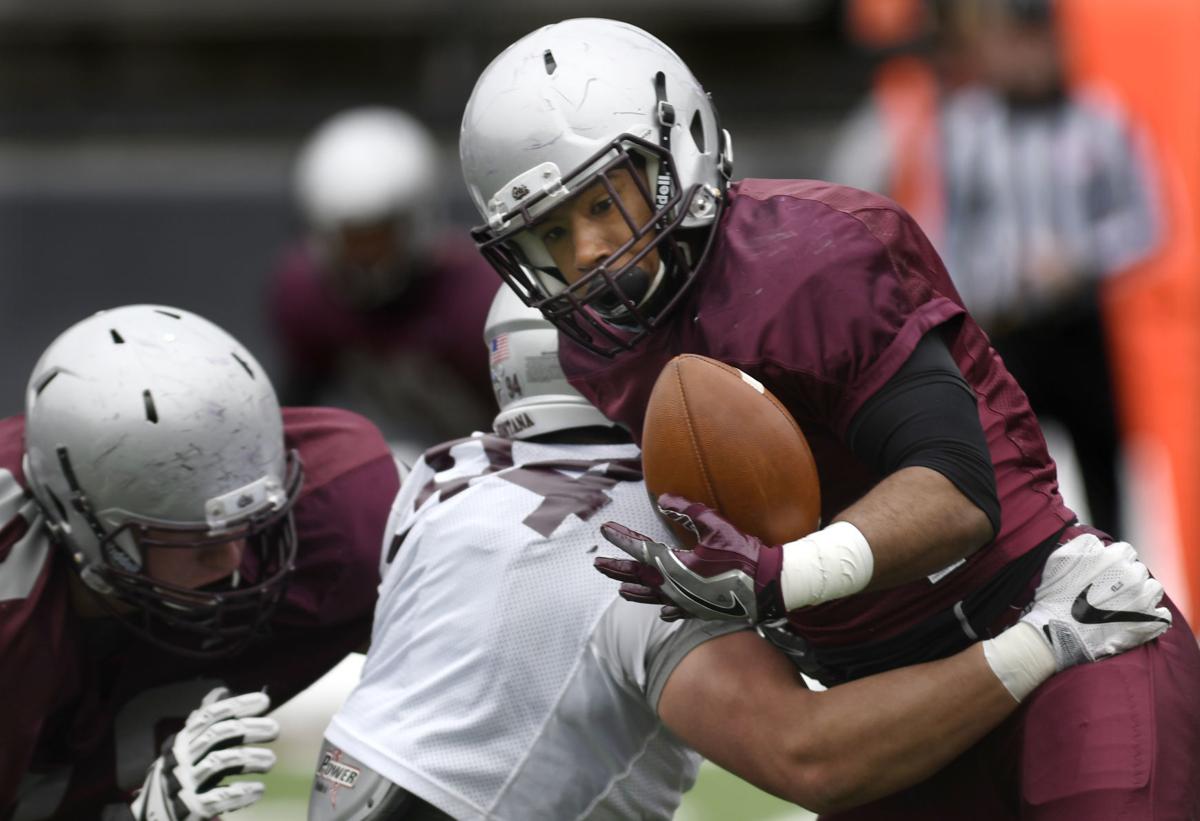 Sophomore running back Rey Green nearly fumbles the ball during the beginning of the scrimmage.

Montana quarterback Dalton Sneed runs with the ball before getting tagged by defensive end Jesse Sims, a Stevensville product, during Friday's scrimmage in Washington-Grizzly Stadium.

Sophomore running back Rey Green nearly fumbles the ball during the beginning of the scrimmage.

MISSOULA — As the whistles blew to signify the start of Montana's first open scrimmage of spring, junior transfer quarterback Dalton Sneed trotted onto the field along with fellow transfer running back Adam Eastwood.

Sneed handed the ball off to Eastwood for the first two plays from scrimmage while lined up deep inside Montana territory before attempting his first pass: a quick look at junior wide receiver Jerry Louie-McGee that fell incomplete to end the first series.

Last season's starting quarterback, Gresch Jensen, came out for the second series, which also started at the offense's 2-yard line. Jensen connected with Brennan Corbin for 3 yards for the first completed pass of the day. That drive eventually stalled after three consecutive hand-offs to junior running back Alijah Lee and a pass intended for Mitch Roberts that didn't connect.

It took 22 plays before the offense got on the board.

"It takes a little while to get in rhythm as an offense, so when people talk about momentum, it's real, you can feel it," Jensen said of the slow start. "Once you get in rhythm, you start getting plays, chipping away at it, it just goes from there."

But after that slow start, the two began to thrive inside a blustery and chilly Washington-Grizzly Stadium.

Their rushing statistics were similar too. Sneed finished with 12 net yards rushing, while Jensen had seven.

The offense put up 397 yards of total offense and had 12 touchdowns.

"Last scrimmage, the offense wasn't clicking," Sneed said. "Today we were. I think offense won the day against the defense and we put a lot of points on the board and everybody's doing their 1/11th. Everyone's doing their job and I think that's what really got us moving the ball down the field today."

Also on the ground, Eastwood and senior running back Alijah Lee had similar days. Eastwood racked up 41 yards rushing, while Lee hit 40 yards rushing with a touchdown.

Through the air, sophomore wide receiver Samori Toure ignited with three touchdowns on his three receptions for 35 yards. Two of his touchdowns came from Jensen, while the first one came from Sneed.

He wasn't the only one with multiple touchdowns. Redshirt-junior wide receiver Justin Calhoun had two receiving touchdowns — one from Sneed and one from Jensen.

Wideouts Keenan Curran, a senior, and Samuel Akem, a sophomore, had the other two receiving touchdowns.

"They should have been picks," Tilleman said after the scrimmage, shaking his head.

Senior punter Eric Williams had two punts — one for 40 yards and the other for 38 yards.

Junior kicker Tim Semenza was on duty for PATs and field goals. He connected on his last field goal, a 27-yarder, but missed the first two. The first missed field goal ricocheted off the right upright, while the second was wide left.

Semenza made four of his five PATs as well, with his lone miss coming after he hit the left upright.

"Kickers miss kicks. You watch on Sunday, they miss kicks," Montana coach Bobby Hauck said. "The crime is to miss consecutive ones. We'll just keep going. I thought our guys, again, the weather wasn't real good. It was cold and pretty damp. They handled the ball well, so the snappers, holders, were good."

Hauck was pleased with the game-like situations that were presented on Friday in the 94 plays that were run: red zone, deep within own territory, near mid-field, etc.

"We got to work some very specific situations. From an educational standpoint with our team, that will be good," Hauck said. "The film will be valuable for our guys to teach off of on Monday and Tuesday next week. The effort was good.

"I liked the way our ball handlers handled the inclement weather. We didn't turn it over, we didn't put it on the ground. We snapped it, we checked it, we did all those things without any issue in that regard, so that was good."

But, as always, there's more work to be done.

"Never. Nobody is. We're not even close," Hauck said, with a smile, of if his players on track to where he wants them to be. "That's the way coaches are. It's never worth a damn until we actually play somebody and get more points than they do."

NOTES: Most players currently on the roster got in on the action Friday.

New faces: Several new players — both walk-ons and a transfer — were recently added to the roster. Some of them have been participating in spring ball since the start.

The lone new transfer is Connor Fohn, a redshirt-junior safety who came to UM via Carroll College. Fohn is originally from Salem, Oregon. Even though he's a transfer, Fohn is still considered a walk-on.

There are also four new walk-ons on the roster, with most of them hailing from the Treasure State.

Spring game: Montana has two more practices before next Saturday's spring game. The spring game kicks off at 1 p.m. on April 14 at Washington-Grizzly Stadium. Tickets are $5.