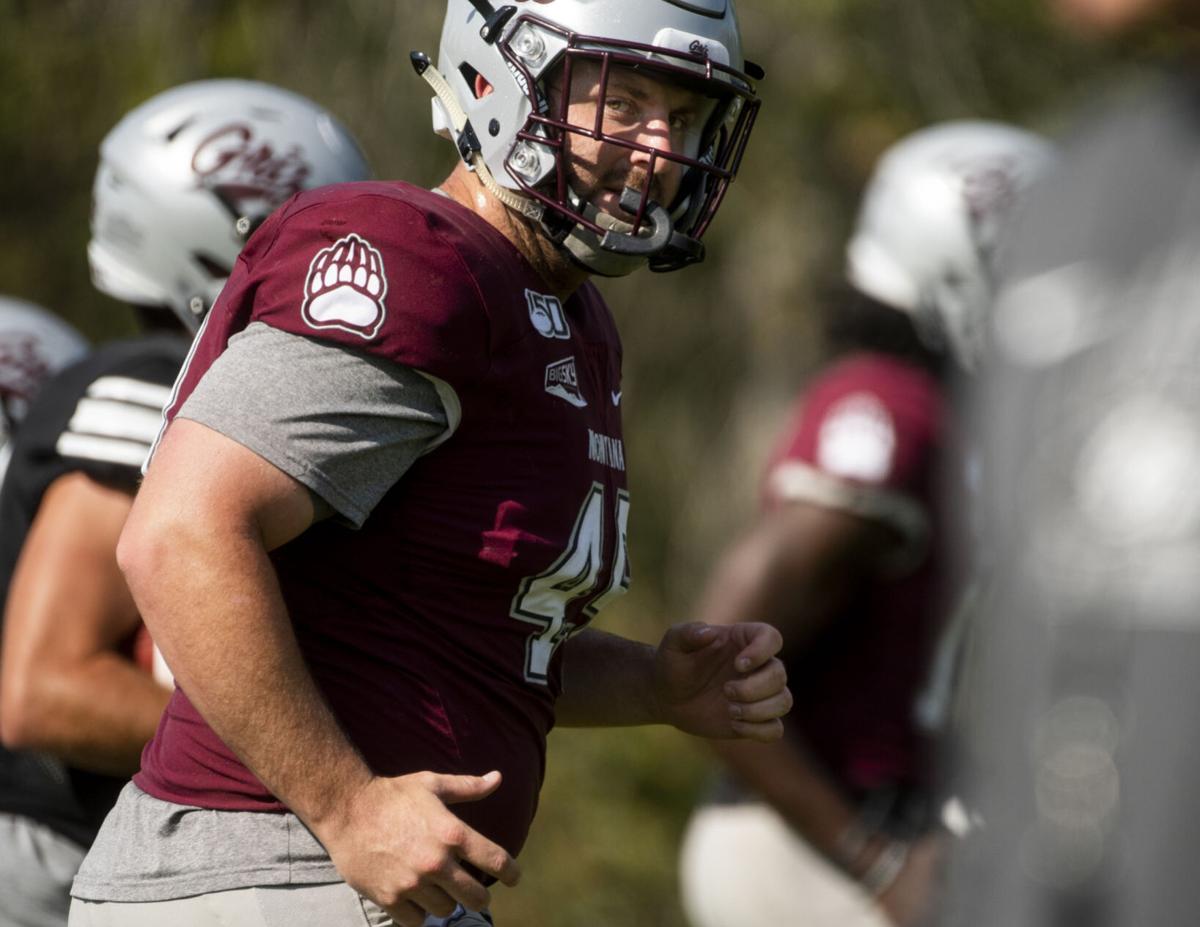 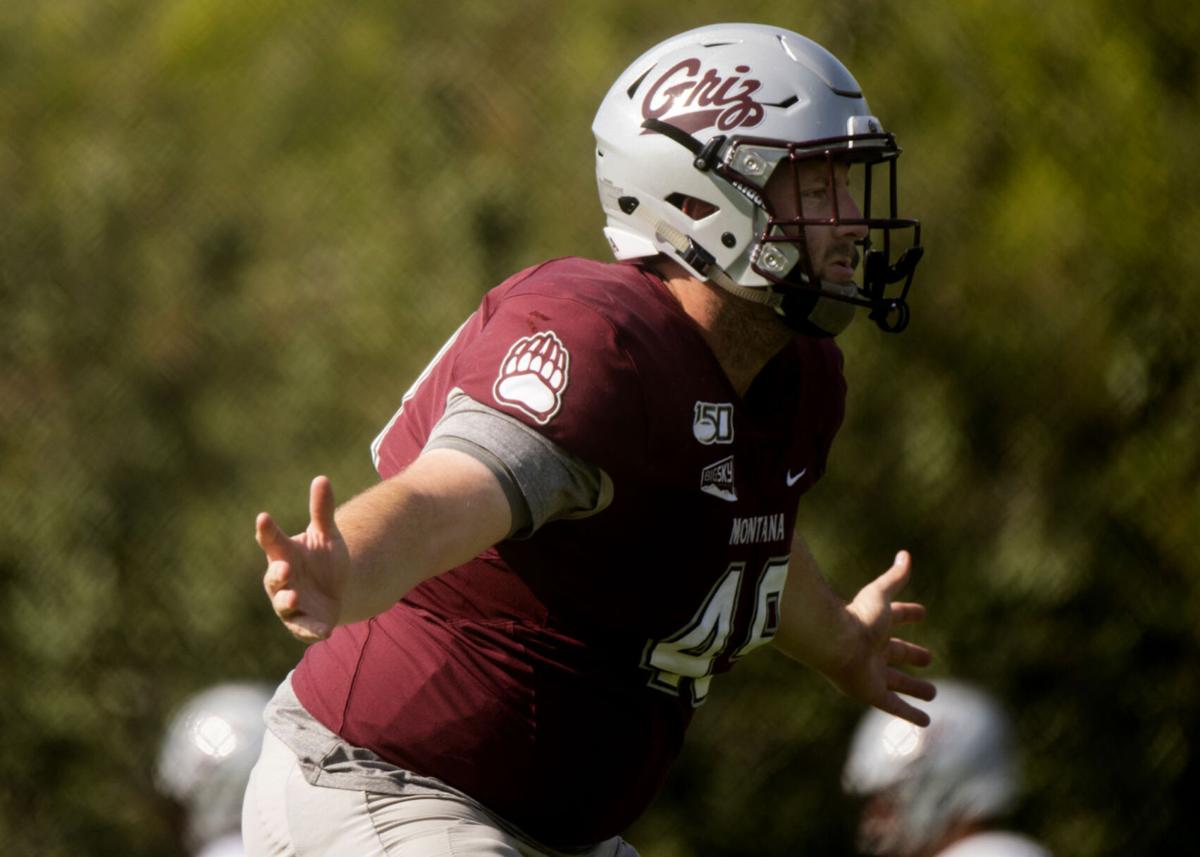 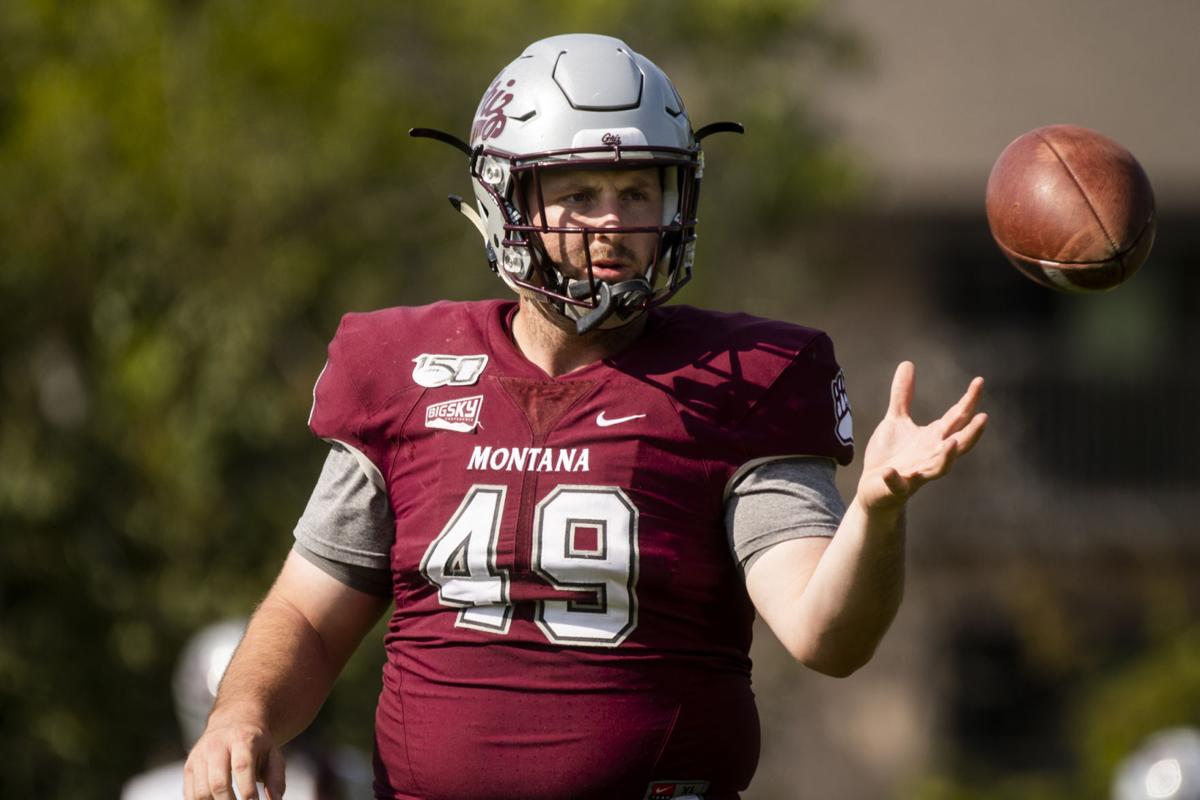 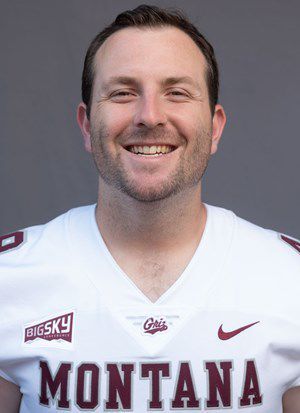 MISSOULA — Jace Lewis turned to Matthew O’Donoghue while running off the practice field at the Riverbowl on the University of Montana campus.

Without missing a beat, O’Donoghue returned fire to his fellow senior.

“Thanks, Kidder, I’ll throw that in the interview,” O’Donoghue jawed back, purposefully calling Lewis by the last name of Caleb Kidder, a former player who wore the No. 37 legacy jersey Lewis is donning this season.

O’Donoghue’s quick wit and ability to throw jabs help make him popular among the team. It’s all in good fun, but if you come at O’Donoghue, you better not miss. That’s also true on the ping-pong table in the locker room, where his skills are matched by only a couple others.

“He’s the king of trash talk,” Lewis said. “He’s just a goofy kid. There’s nothing not to like about him.”

O’Donoghue does care about his teammates, and that endears him to them. Once you’re in with him as a friend, you’re in for good. He even treated all the other specialists on the team to a lunch of burgers and fries at Thomas Meagher Bar at the close of preseason camp.

“He just treats guys the right way,” punter Brian Buschini said. “Anytime you can do that, that’s the mark of a good person.”

O’Donoghue and his friends also enjoy golfing, which is how he ended up working at the Missoula Country Club. He’s a bartender there but has pitched in at the pro shop when Connor Sproull, the PGA Pro at the country club, needed to take off some time.

“He’s just a true team player to work wherever and whenever he’s needed,” Sproull said. “It’s rare to find that these days, that jack-of-all-trades. He’s a Swiss Army knife, kind of like how he is with the Griz.”

O’Donoghue’s teammates and coaches love his effort on the field. He’ll run through M drills pretending like he’s a running back. He’ll even try to run over a defensive back on special teams coverage plays in practice.

“He makes what he does important. It’s important to him to be good at it,” Montana coach Bobby Hauck said. “He’s just a guy that loves his team and loves Griz football.”

O’Donoghue’s highlights of making tackles on special teams and catching two-point passes as a long snapper bring joy to many.

“I don’t think he’s ever had any enemies except maybe the opponent,” said Doug Case, who coached O’Donoghue at Foothill High School in Santa Ana, California.

Even O’Donoghue recognizes he doesn’t look like a typical football player at 6-foot-1, 260 pounds. His down-to-earth nature is well received by fans, especially on social media.

“It’s kind of cool, but I don’t know what they like so much. I’m not the best looking guy out there,” he said, laughing. “I’ve talked to a few people, and they just like how I hustle around the field. That’s one thing I’ve learned in football is you can always control your effort.”

His All-American status takes it all to another level. And it coalesces to make him a cult hero because when a long snapper’s name is known, it’s usually because he’s royally screwed up.

“Look at him, an All-American,” safety Gavin Robertson said, unable to hold back his laugh at the thought. “It’s crazy. He loves it. We love him. Just a good dude.”

O’Donoghue keeps a quote from Lewis in his Twitter bio: “Don’t talk about it, be about it.”

“We’d just be screaming that in the weight room when we’d be lifting our freshman year at 5:45 every morning,” O’Donoghue recalled. “He would yell that. It was kind of like a joke, but talk actually is cheap, so we got to go out and do it.”

Their time together in the old weight room is a favorite memory for O’Donoghue and Lewis. Those early morning workouts emphasized to O’Donoghue the importance of hard work.

“College football taught me I got to work as hard as possible all the time,” he said. “I can’t be slacking off or else you’ll never play. You just got to keep working hard.”

O’Donoghue learned a similar lesson from his father, a principal who coached him in football, baseball and basketball growing up. It was his father who convinced him to start long snapping going into high school because it would be his best chance to play in college.

“My dad would push me harder than anyone to be as good as I could be,” he said. “He always told me to never be settled with being OK or good, try to be great. Then my mom was always my No. 1 fan.”

Neither O’Donoghue nor his father had any experience with long snapping, so he did it his own way until he went to some camps. He was a varsity long snapper in high school for three seasons in addition to playing center and taking an occasional snap on the defensive line.

“I’d be here on a weekend after our game to break down the next opponent and I see him working on his long snapping or working out in the weight room,” Case recalled. “He just knew that being a top-notch long snapper might lead to some big things.”

O’Donoghue eventually became a better long snapper than a pitcher and designated hitter, so he chose to pursue college football over baseball. He had only one offer, from UM, but eagerly accepted it and won a three-way battle for the starting job after redshirting his first season.

“He’s not a monster of what you think of a college type of kid,” Case said, “but he understood leverage, knew how to block, hustles on everything he does, has tackling skills. If he wasn’t the biggest kid, he knew how to handle his opponent. He was smarter than most kids on the field.”

Long snapping isn’t as simple as people think. It’s different than a center snapping the ball to a quarterback, so O’Donoghue can only laugh when Moses Mallory and Dylan Cook have tried to long snap, only to have the football roll back most of the 15 yards to the punter.

O’Donoghue didn’t break out until Hauck was hired and brought his special teams acumen to UM. That led to O’Donoghue being involved as a receiver in two-point attempts.

He had never caught a pass on any level until a two-point conversion against Western Illinois in 2018. He caught another in 2019 against Sacramento State.

“He’s an unreal long snapper, too,” Lewis said. “He can whip the ball back there. It’s always fun watching him run down on punts, make plays. That’s actually one of my better memories when he catches those two-point passes and the whole stadium goes crazy, everyone’s banging him on the head. It’s cool. It’s fun to see.”

O’Donoghue’s hustle is evident on punt coverage when he races down the field to make a tackle. That effort even led to him recovering a fumble against Cal Poly in 2018, which is Hauck’s favorite memory of him.

“It was a big play,” he said. “It’s not common that a long snapper makes a big play like that.”

Then again, O’Donoghue is uncommon.

As for if O’Donoghue will go back to California, like Lewis taunted, he’ll get there eventually.

“I’m not in a huge rush to be a normal person,” O’Donoghue said.

What he wants to do with his life might not be classified as a normal person anyway. He wants to become a police officer, following in the footsteps of an uncle, who’s a sergeant in Los Angeles County.

“I feel like I can make a good difference in the world,” he said. “I’ve always been interested in law enforcement. We could always use good police officers, and I think I could be a good police officer. I think I do a good job of being a good person in general, at least I hope I do.”

Buschini, who’s a criminology major and whose father served in law enforcement, thinks it’s a good fit for O’Donoghue.

“He’s really big on doing what’s right,” he said. “He’s pretty good about keeping a calmer head. They look for that in law enforcement. They don’t want someone that loses their cool. I think he’ll be good at whatever he puts his mind to.”

Much like being a long snapper, police officers are usually doing something wrong when their names are well-known.

O’Donoghue will apply for the police academy a few months after finishing school in December. He majored in communications and is taking extra classes in criminology.

“I think he’s good with people,” Hauck said. “That’s a serve-and-protect-the-public job, so I think he’ll be great.”

Before O’Donoghue ever makes it back to California, he’s soaking up his time in Montana. He could’ve already moved on to the next phase of his life, but he couldn’t pass up one final opportunity with his teammates.

He took advantage of the extra year of eligibility the NCAA granted all athletes because of the pandemic and is looking to go out on top with a Big Sky title and national championship.

“I want to finish it out right,” he said.

One thing for sure is he’ll be missed in Montana.

“Wherever he goes,” Buschini said, “he’ll light up whatever room he’s in.”

The Grizzlies held their home opener against Western Illinois. Here's what you may have missed from their second week.

On Saturday, the Montana Grizzlies will play their first meaningful home game since the second round of the 2019 FCS playoffs.