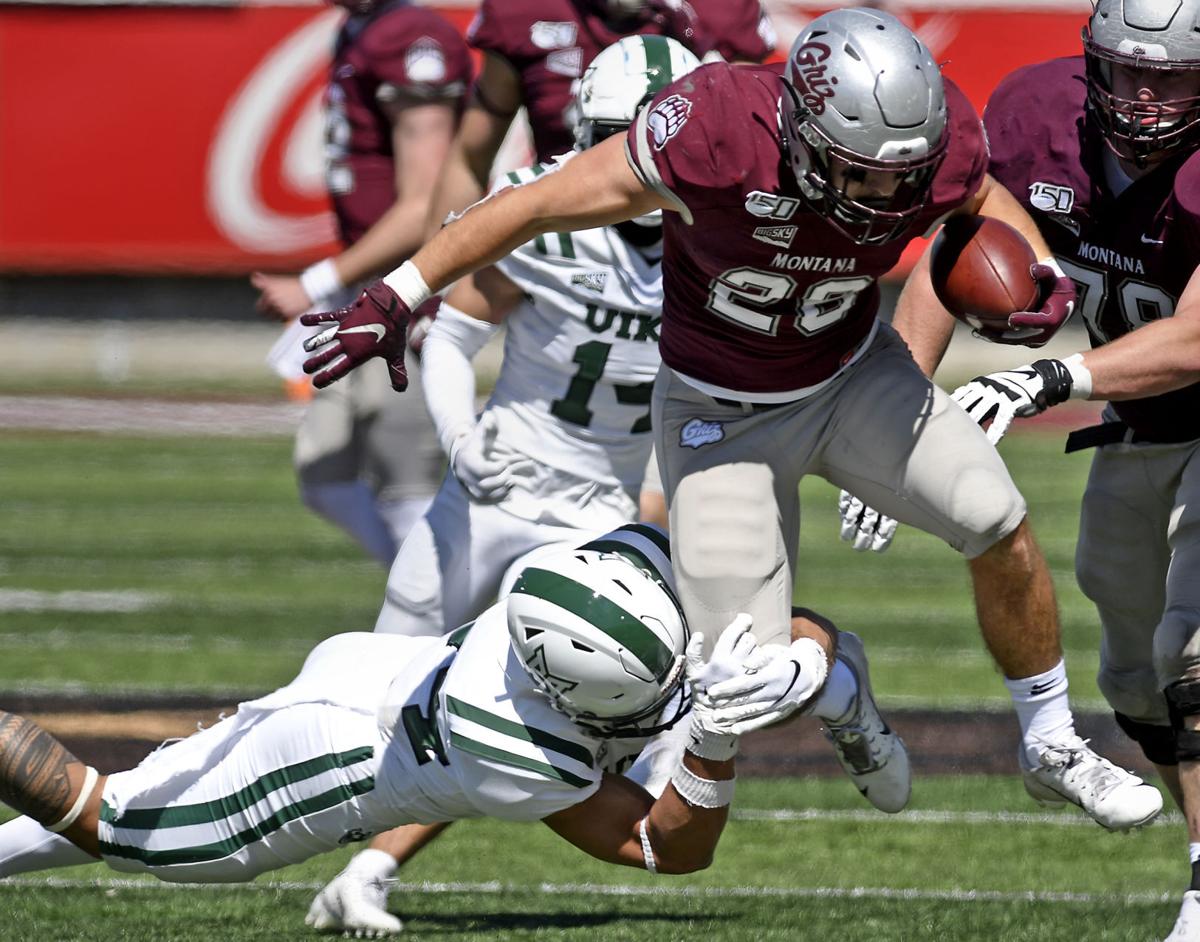 Montana running back Nick Ostmo is tackled by Portland State's Ty Apana-Purcell during the Grizzlies' 48-7 victory on Saturday at Washington-Grizzly Stadium. 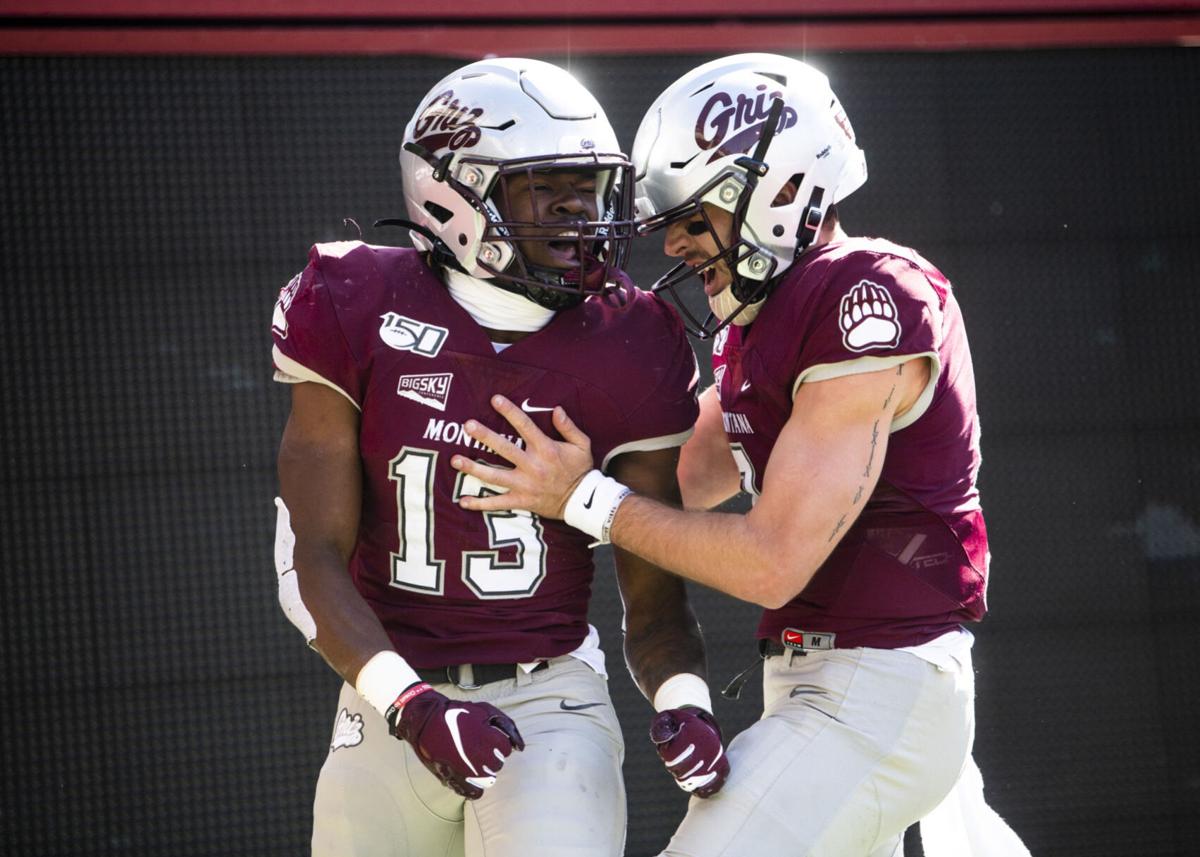 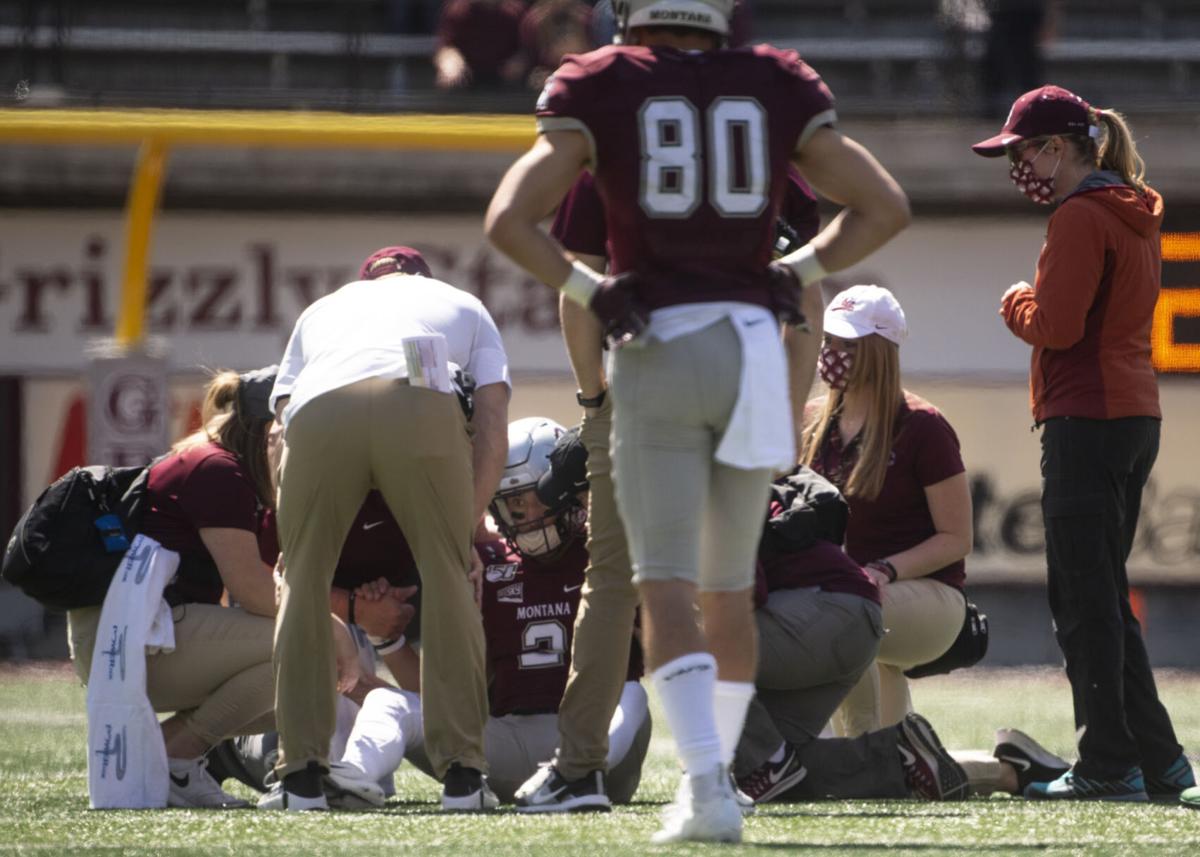 Montana quarterback Cam Humphrey (2) sits on the field after getting hit by two Portland State defensive players during Saturday's game. 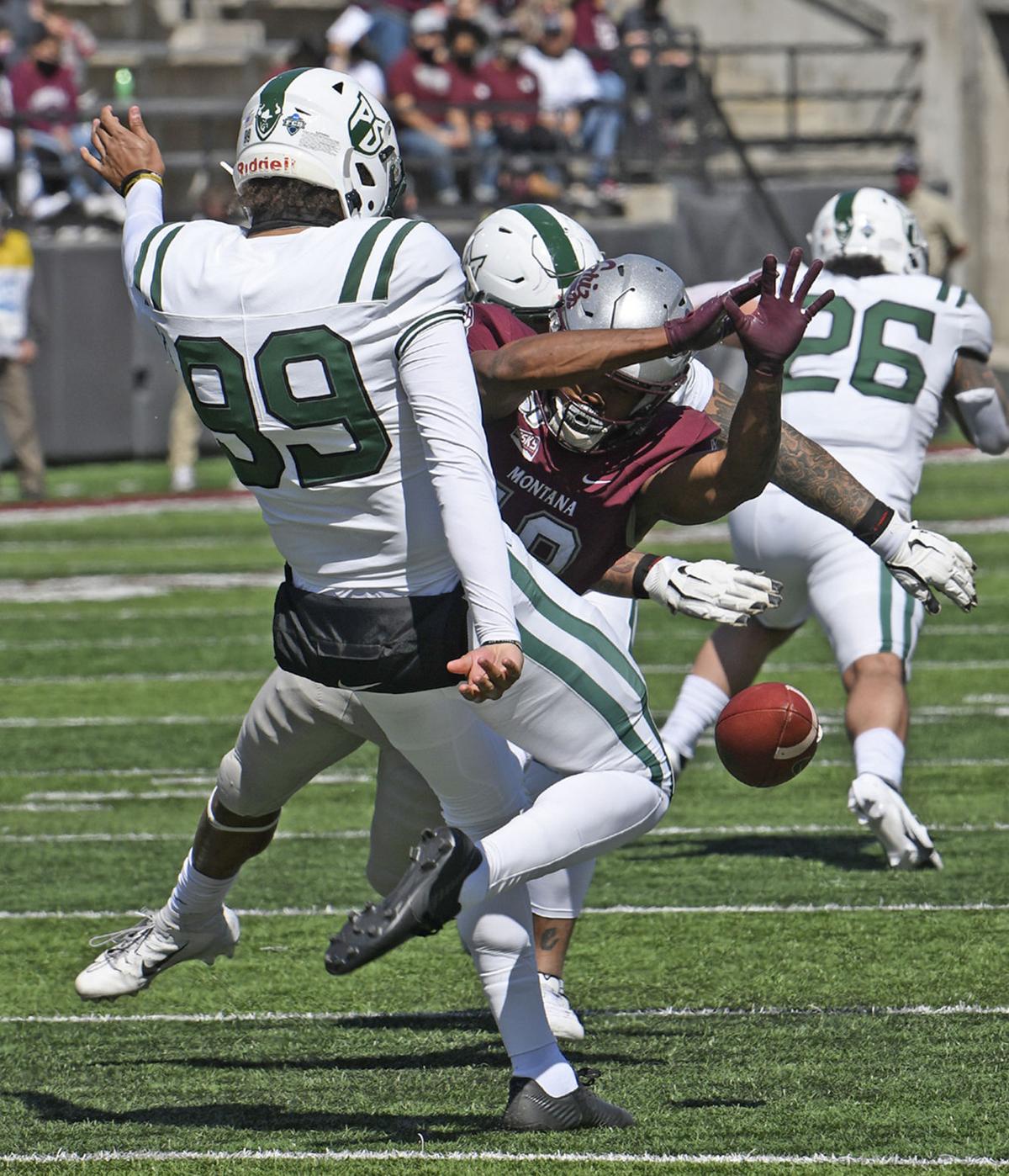 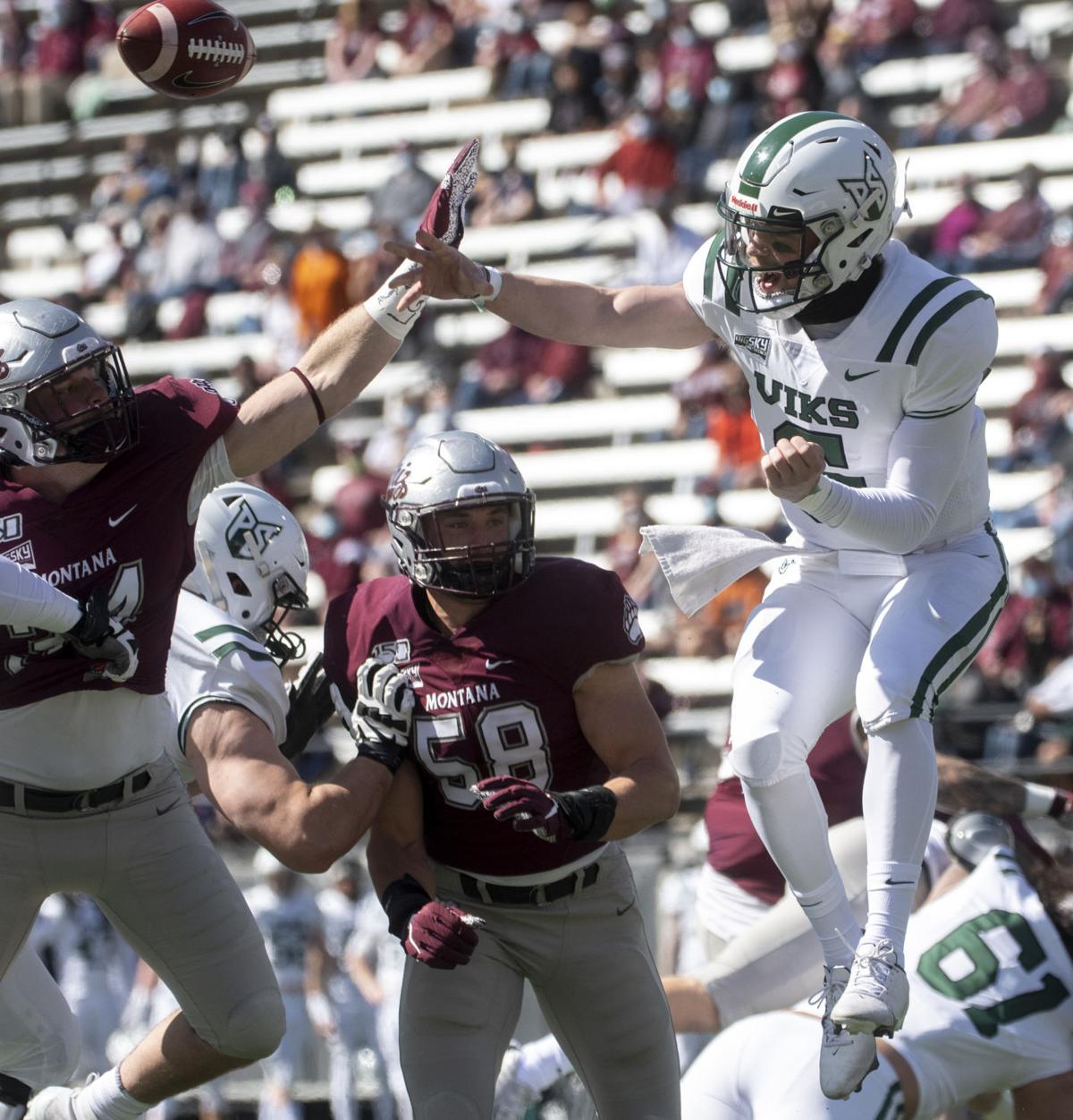 Montana running back Nick Ostmo is tackled by Portland State's Ty Apana-Purcell during the Grizzlies' 48-7 victory on Saturday at Washington-Grizzly Stadium.

Montana quarterback Cam Humphrey (2) sits on the field after getting hit by two Portland State defensive players during Saturday's game.

MISSOULA — Montana allowed four conversions on third and fourth downs and gave up 10 points — not in one quarter, one half or even one game.

That’s what the Griz allowed in 120 minutes across two spring football games, the second of those being a 48-7 pounding of Portland State on Saturday at Washington-Grizzly Stadium in Missoula. Combined with the 59-3 win over Central Washington last week, UM outscored its opponents 107-10 in two spring games, and that was with some offensive struggles.

“We had a couple of goals this spring,” Montana coach Bobby Hauck said after the win over PSU, a perceived higher caliber of competition than CWU. “The first one was to win, certainly.

“The second one was to send a message that we have a good football team here in Missoula at the University of Montana, and I think that message has been sent. I like our team. I’m fired up about the next couple months getting ready for the fall, and I can’t wait for September.”

Montana’s motto since Hauck came back to UM in 2018 has been “Return to Dominance.” The Griz went through a rocky 6-5 season that first year, including an upset loss to Portland State, but they rebounded to make the FCS playoff quarterfinals in 2019 as they look to make it back to the national title game, where Hauck took the team three times from 2003-09.

PSU coach Bruce Barnum took Hauck’s words to another level as his offense looked like it got left on its leisurely cruise on Lake Coeur d'Alene. He knows his O-line is the team’s weakness, he was missing his top receiver from 2019 and PSU was playing its first game while UM got to play last week. But the Griz still held the Vikings to 2 of 17 on third and fourth downs and allowed just 293 yards and 12 first downs.

“Their front seven will carry that team a long way,” Barnum said. “I’ve been in this conference for many moons, and that defense, the Griz are back. I don’t care what you say, whether how good we are or not because I think we’re pretty good in some spots. But that football team is the Griz of old.”

Headlining UM’s front seven is senior linebacker Jace Lewis, a Townsend native who was named the Big Sky preseason defensive MVP. He lived up to that billing as he tallied eight tackles, 2.5 tackles for loss, 0.5 sacks, all team highs.

Lewis also returned an interception 20 yards. It was the lone turnover forced by the Griz, although they did create four turnovers on downs as they held PSU to 0 of 4 on fourth downs in addition to 2 of 13 on third downs as they mixed in blitzes.

“The D-line up front, they eat up double teams the whole game so we can flow and make plays,” Lewis said. “They make it pretty easy on us throughout the game.”

The front seven is looking like it has the depth Hauck covets, but UM had playmakers all over on its way to 10 tackles for loss. Junior linebacker Marcus Welnel, from Helena Capital, had two TFLs, while junior safety Robby Hauck and junior defensive tackle Eli Alford each had one. Welnel, Hauck and senior safety Gavin Robertson all had five tackles.

Junior cornerback Justin Ford, a Louisville transfer, impressed for another week with his ability to navigate to the ball carrier and put a licking on them. He finished with four tackles and stopped a fourth-down conversion when he raced over to shove a pass catcher out of bounds.

UM held senior quarterback Davis Alexander to 15-of-25 passing for 193 yards, one TD and one interception. The Vikings’ lone score came on a 73-yard catch-and-run when Mataio Talalemotu got behind sophomore cornerback Corbin Walker and showed his breakaway speed.

The Griz never allowed PSU to establish a run game, giving up just 100 yards on 35 carries. Alexander led the team with 33 of those yards and was sacked once.

“They did a nice job of bottling him up,” Barnum said. “When they add one (defender in the box), we have to be able to throw the football, and we couldn’t because of their defensive line. They got pressure and stymied or made Davis Alexander take off.”

While the defense dominated, the running backs came up huge as UM gobbled up 248 rushing yards and ran for five touchdowns. The Griz finished with 511 total yards of offense, 25 first downs and went 8 of 18 on third and fourth downs.

Senior quarterback Cam Humphrey was 19-of-26 passing for 239 yards, two touchdown passes of 54 yards to Gabe Sulser in stride and 15 yards to Sammy Akem on a post route to turn a 14-0 lead into 27-0 at the half. He was picked off once and left early in the third quarter after a hit from two defenders had him limping, yet the offense still rolled up 48 points.

It might not matter who plays quarterback if the defense can sustain this level of play, the special teams continues to flip the field and the skill players are solid. Sulser again led the way in receiving yards, this time with 83 on four catches.

With Hauck feeling his team sent a message this spring, the question is how many other teams are going to notice? They’re probably focused more so on the FCS playoffs, which Montana won’t be participating in because it opted out of the Big Sky’s spring season.

One team should take notice, even if they don’t consider UM a threat: Washington, the FBS team the Griz open up against on Sept. 4. Barnum made sure to give the Huskies a heads up about the caliber of team that’ll be coming in there, and that was before he got to see his team with high hopes get demolished by Montana.

“I called Washington a while back, and I told them they’re going to be in the national championship,” Barnum said of the Griz. “That’ll be a playoff team next year in our conference.”

Photos from the Grizzlies' 48-7 victory over Portland State in their second of two spring games at Washington-Grizzly Stadium, Saturday, April…

After the fall 2020 season was canceled, the Grizzlies played two games against Central Washington and Portland State in the spring of 2021.

The Montana Grizzlies are hosting Portland State at Washington-Grizzly Stadium for the second of two spring football games after playing no games in 2020.