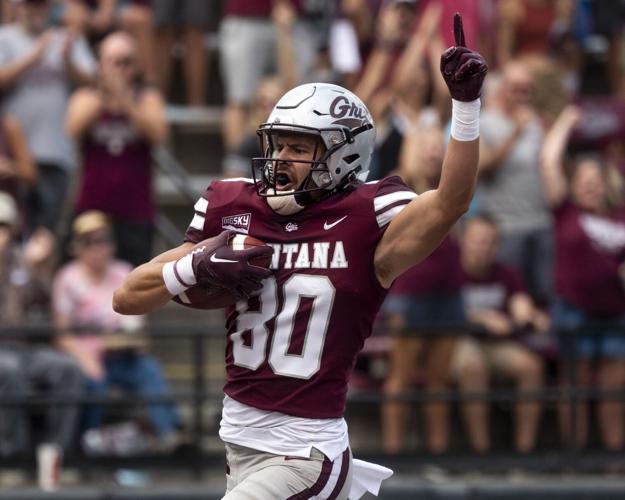 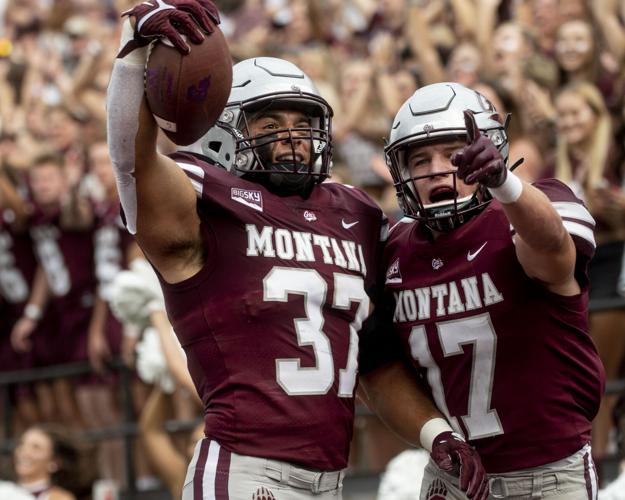 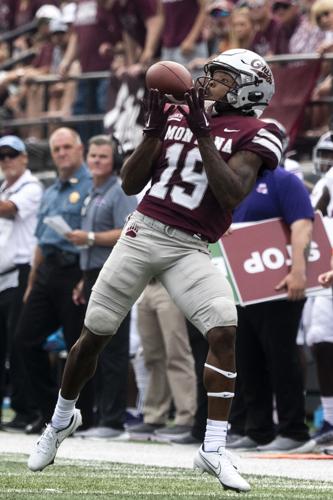 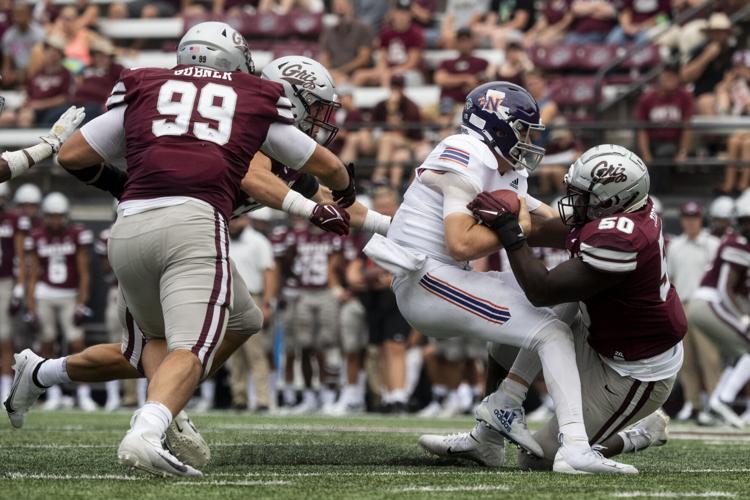 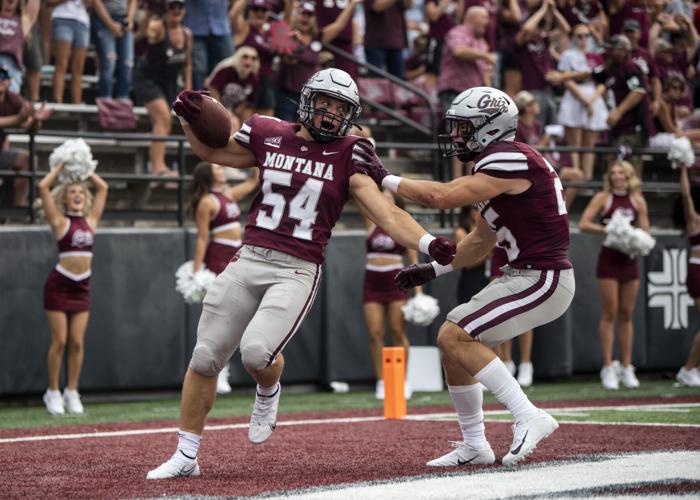 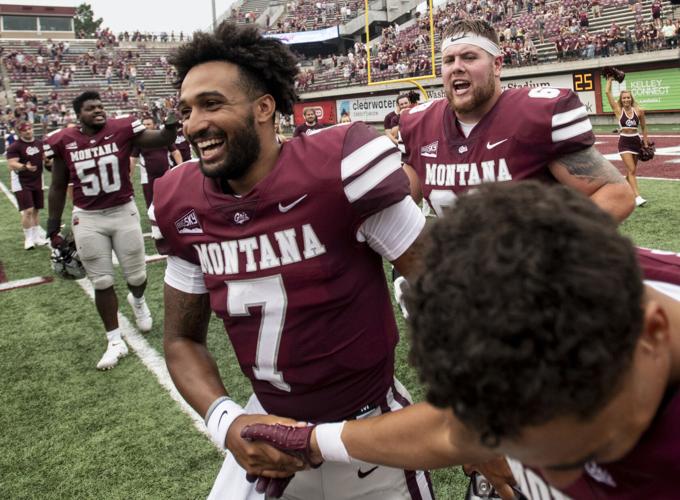 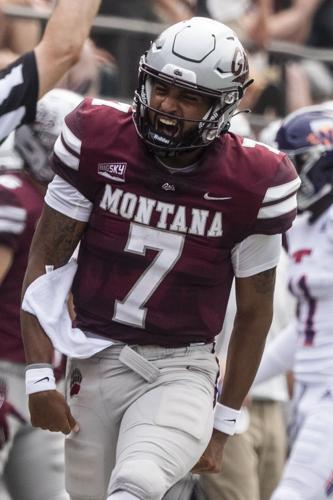 Montana quarterback Lucas Johnson (7) celebrates after making a break down the sideline during the Griz home opener against Northwestern State at Washington-Grizzly Stadium, Saturday, Sept. 3, 2022. 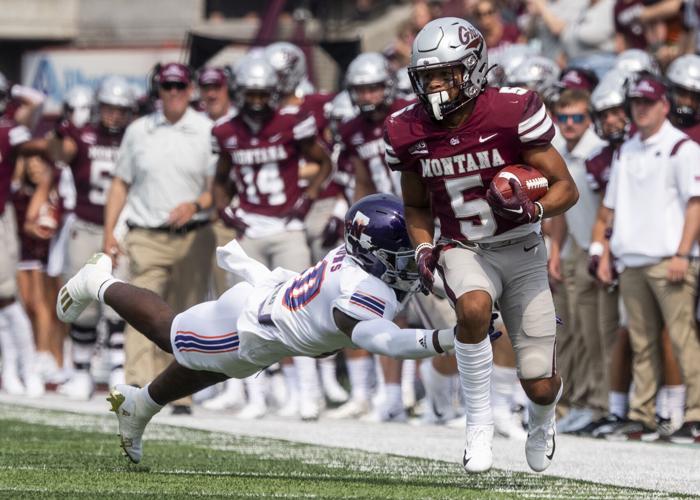 Montana quarterback Lucas Johnson (7) celebrates after making a break down the sideline during the Griz home opener against Northwestern State at Washington-Grizzly Stadium, Saturday, Sept. 3, 2022.

MISSOULA — Lucas Johnson was igniting Montana’s offense by running for multiple gains of 20-plus yards and throwing a pair of touchdowns in the first quarter Saturday at Washington-Grizzly Stadium.

His play over the first three drives of the season opener against Northwestern State was starting to make a statement that the Griz might have found their quarterback. Montana coach Bobby Hauck certainly was beginning to feel that about the San Diego State transfer who he’s reunited with after trying to recruit him out of southern California several years ago.

“I didn’t tell him this, but first quarter he threw a couple really nice passes and then he took off and ran for a first down, and I just said, ‘Man, we got the right guy in the program,’” Hauck said after a dominant 47-0 victory. “I hadn’t seen him play a live game since high school, probably (his) junior year in high school, so it’s been a long time. I’m glad he’s with us.”

Johnson is glad to be playing as a seventh-year senior who originally thought his eligibility was up last year. He’s played in the ACC at Georgia Tech and the Mountain West at SDSU, but the announced crowd of 24,096 impressed him. More importantly, he kept his composure in that environment.

Johnson completed 15 of 24 passes for 208 yards and four touchdowns as he spread the ball to seven players. The Griz offense controlled by coordinator Timm Rosenbach showed creativity in scoring touchdowns on their first and third drives.

They then went 3-and-out on their second drive and lost 3 yards on their fourth drive. They went with their second-string O-line on the fifth drive, which Hauck said was “because it’s hot out” weather-wise.

“I felt comfortable, just real comfortable with the offense we have,” Johnson said. “I mean, we have so many playmakers and we have a really good line, so it’s just my job to get them the ball. So, it makes my job really easy.”

Mitch Roberts, a senior receiver from Missoula Sentinel, finished with six catches for 103 yards and two scores. Those scores doubled his career total after he entered the game with 96 catches for 1,134 yards and two touchdowns in 39 games.

The 30-yard score on a wide receiver slip screen, a new wrinkle in the offense, made it a 7-0 lead. The 13-yard score on a post route with five receivers and an empty backfield gave UM a 13-0 lead in the first quarter.

Junior Bergen, a sophomore from Billings Senior, showed his true freshman season was no fluke last year, when he filled in at running back to help a depleted group. Back to his natural position, he caught two passes for 61 yards and returned four punts for 55 yards.

His 14-yard touchdown on a swing pass into the flat after a fake fly sweep and his explosive burst for a 47-yard catch-and-run score on a crossing route stretched UM’s 26-0 halftime advantage to 40-0 by the opening minutes of the fourth quarter.

“I think a lot of it came down to just our tempo as an offense,” Roberts said. “We got going early. Our coaches put a great game plan together for us. We just went out and made plays and everyone did really well.”

Johnson showcased his wheels by rushing seven times for 76 yards. He gained 89 yards on six carries and was sacked just once, for 13 yards, which is a positive sign for a young offensive line. His longest run, 37 yards out of the diamond formation on a read play, came during UM’s second scoring drive and was more than the 36 yards Northwestern State rushed for as a team.

Running back Marcus Knight ran six times for 26 yards and put UM up 19-0 in the first half on a 7-yard touchdown run in his return from an ACL injury. It was his first score since 2019, when he broke Chase Reynolds’ single-single school record for rushing and total touchdowns.

Running back Nick Ostmo, who returned from an ankle injury in 2021, gave Montana a 47-0 lead in the fourth quarter with his 36-yard touchdown run. He rushed for 62 yards while carrying the ball nine times, the most of the seven Griz rushers.

The Griz displayed a balanced offensive attack with 211 rushing yards and 253 passing yards. By comparison, the Demons totaled 219 yards while taking 12 tackles for loss and four sacks. The physicality of the Griz running backs impressed Hauck and caused problems for the Demons.

“Montana, they’re a very power run team, very disciplined O-line, good running backs,” NSU linebacker Race Moser, who had a game-high 10 tackles, said. “The top offenses we’re used to going against (in the Southland Conference) are very spread, tempo, just like ours. That’s what we’re very accustomed to is teams speeding it up and getting it out to the edges. Montana, they just ran it right down us. It was a big adjustment.”

The Griz gave Johnson and the offense some help by adding a special teams score. Janacaro blocked a punt that linebacker Tyler Flink recovered and returned for a touchdown to stretch the lead to 26-0 right before halftime.

Northwestern State coach Brad Laird was impressed with Johnson. He was a record-setting quarterback himself in the 1990s and has since been a defensive coach trying to limit offenses.

“He’s got a lot of experience coming from San Diego State,” Laird said. “It may be a new experience with a new team, but it’s definitely not a new experience for him playing on Saturday afternoons. I thought he controlled the game.”

The No. 3 Grizzlies (1-0) opened their season by shutting out Northwestern State at Washington-Grizzly Stadium.