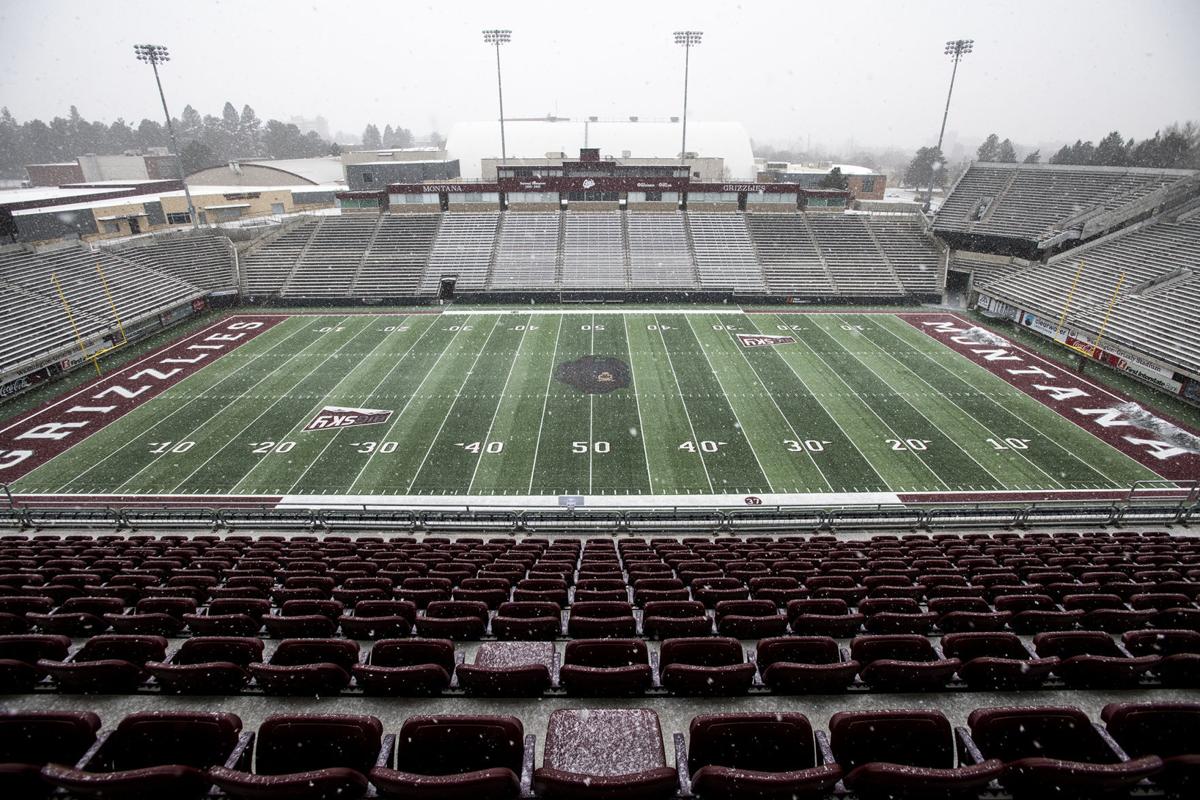 Montana and Montana State announced Friday that they won't be playing the Big Sky Conference football scheduled for this spring. A potentially modified schedule of non-conference games is in the works. 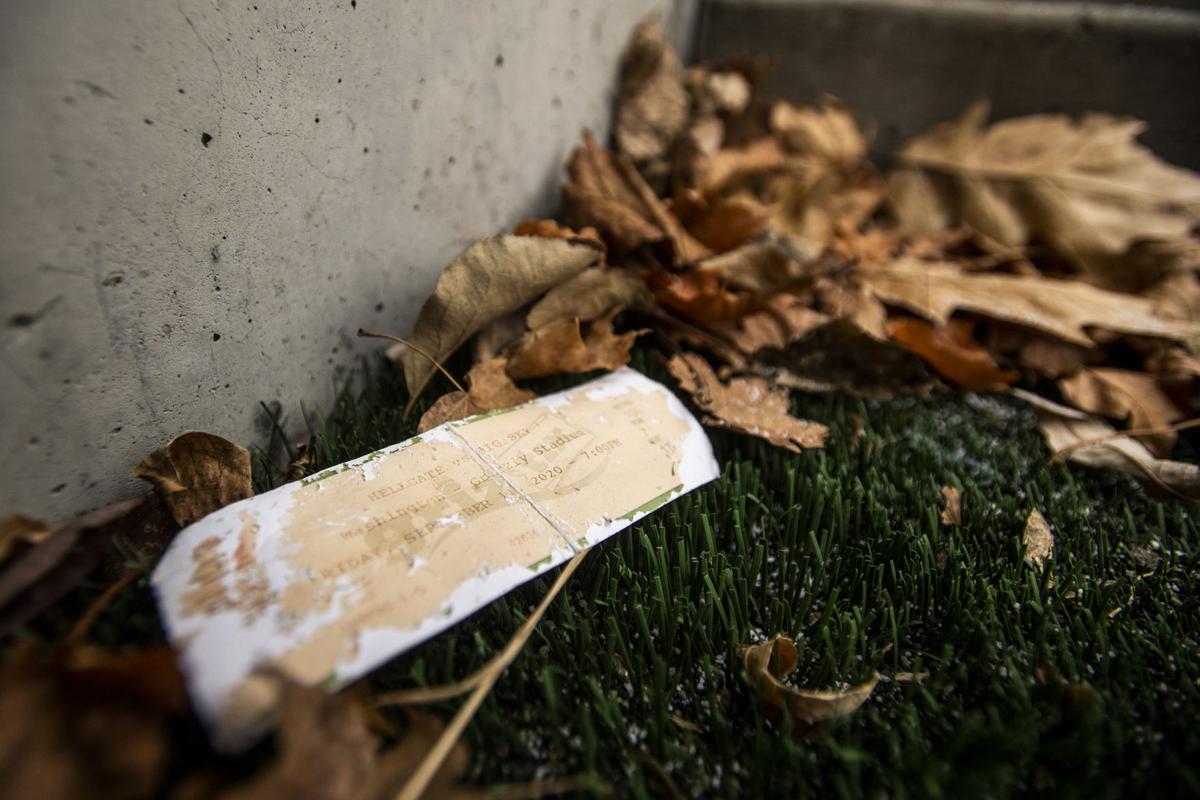 An old ticket for a high school football game sits on the field at Washington-Grizzly Stadium.

Montana and Montana State announced Friday that they won't be playing the Big Sky Conference football scheduled for this spring. A potentially modified schedule of non-conference games is in the works.

An old ticket for a high school football game sits on the field at Washington-Grizzly Stadium.

MISSOULA — Montana won’t be playing any of its usual opponents on the football field this spring, if the team plays at all.

The Grizzlies opted out of the Big Sky Conference spring football season Friday and might instead possibly play two non-conference games. The move was made in unison with Montana State and takes both out of contention for the Big Sky titles and FCS playoffs.

Twenty-seven FCS teams have opted out of the spring season so far, according to HERO Sports, while 100 still intend to play.

“Good to have some closure,” Montana athletic director Kent Haslam said in a Zoom call. “We will miss football, there’s no doubt about it, but it is good to know what we’re doing now in the spring.”

Montana football coach Bobby Hauck noted the “morale is good” among his players, although they were subdued when they were told about the new plan for spring.

“They were fine,” Hauck said in a Zoom call. “They didn’t start crying and they didn’t throw a party.”

Football at Montana had already been affected in the fall when the Big Sky moved the season to the spring due to the coronavirus pandemic. At the time, finances were a major factor because of NCAA-mandated COVID testing.

Now, the costs and availability of those tests are more reasonable and in place at UM, but that wasn’t at the heart of the choice to forego the spring season. For Montana, the decision revolved around the safety of preparing for a season in a Montana winter, while also keeping an eye on being ready for the fall 2021 season.

“The economics for us plays a factor as well,” Haslam said. “But this decision was more focused on the safety of a football program competing that much and preparing by Feb. 27.”

Haslam said they discussed starting the Big Sky season later to delay the practice start date for UM and MSU in the winter. Two bye weeks are built into the schedule, meaning the season could’ve started March 13, but that would leave no makeup opportunities.

With no schedule change, UM and MSU did what was best for them.

“We want to compete this spring,” Hauck said. “We just don’t believe playing a complete conference schedule is in the best interest of our team. Preparing to win a championship in February with no indoor facility would be difficult at best, if not impossible.”

Neither UM nor MSU have an indoor practice facility to escape the brutal Montana winters, but both have that in their facilities master plan. Hauck declined to comment on the hypothetical question of whether UM would’ve played if it had a practice facility, but he did say having such a facility “would certainly enhance our offseason training.”

Keeping open the possibility of games will give the team a chance to play against outside competition. Hauck emphasized if the Griz played somebody else that it wouldn’t be a scrimmage, and the intent would be to win.

“We need to go compete. We need to play a little bit,” he said. “This modified schedule allows our players to compete while keeping the focus on fall 2021.”

The Griz haven’t played since December 2019 against Weber State in the FCS playoff quarterfinals. Their next scheduled game is Sept. 4 at Washington, and they would’ve had to play six league games and potentially up to 10 games with the playoffs this spring if they stuck with the Big Sky’s schedule.

That many games and practices would increase the chance of injury and potential virus spread.

“I’m personally optimistic that fall of 2021 will look very much like fall of 2019 looked,” Haslam said. “With vaccines moving out and folks saying that it looks like we’ll be more back to normal, I actually think this decision looks toward fall of 2021 and plays into why we made that decision.”

What remains to be seen is if any non-conference games are played, or even scheduled. Haslam is targeting April while staying within the NCAA-allowed window for playing non-playoff games, which is Feb. 27 through April 17. In a normal spring, teams aren’t allowed to play games.

No opponents are set yet, but Haslam expects both games to be at home against non-Division I opponents. In addition to UM and MSU, Portland State opted out of the spring season Friday, while Sacramento State had done the same during the fall semester.

“I don’t foresee us playing any Big Sky Conference schools,” said Haslam, who noted that if UM and MSU don't play this year, then who gets to host the rotating rivalry game in 2021 will be decided at the conference level as the league talks through the season's schedule. The 2022 schedules and beyond have to be reset because Southern Utah is leaving for the WAC.

Playing two home games instead of foregoing spring altogether might give UM a chance to make money from football ticket sales. As of now, the Missoula City-County Health department isn’t allowing fans at UM basketball games, aside from two family members per Griz player.

That will be re-evaluated by April, but Haslam said, “our plan is to get two games regardless” of whether fans are allowed at football games. On the flip side, UM won’t have to pay travel costs for three road games, which would’ve been the case if it played the Big Sky’s schedule.

“Hopefully we do have a few thousand people that we can get in here and help feed their appetite to watch Griz football,” Haslam said.

Even if Montana doesn’t play any games this spring, the Griz are in line to at least have a normal spring routine as they prepare for 2021. The team is in strength training, will move into a strength and conditioning combo in a few weeks and then begin a regular spring camp, which normally starts in early March and ends in early April.

“I feel great about that,” Hauck said. “We have a plan, we have direction, so let’s go.”

The Cats and Griz initially hoped to be a part of the league's six-game spring season, but now they're looking at possibly playing two games each.