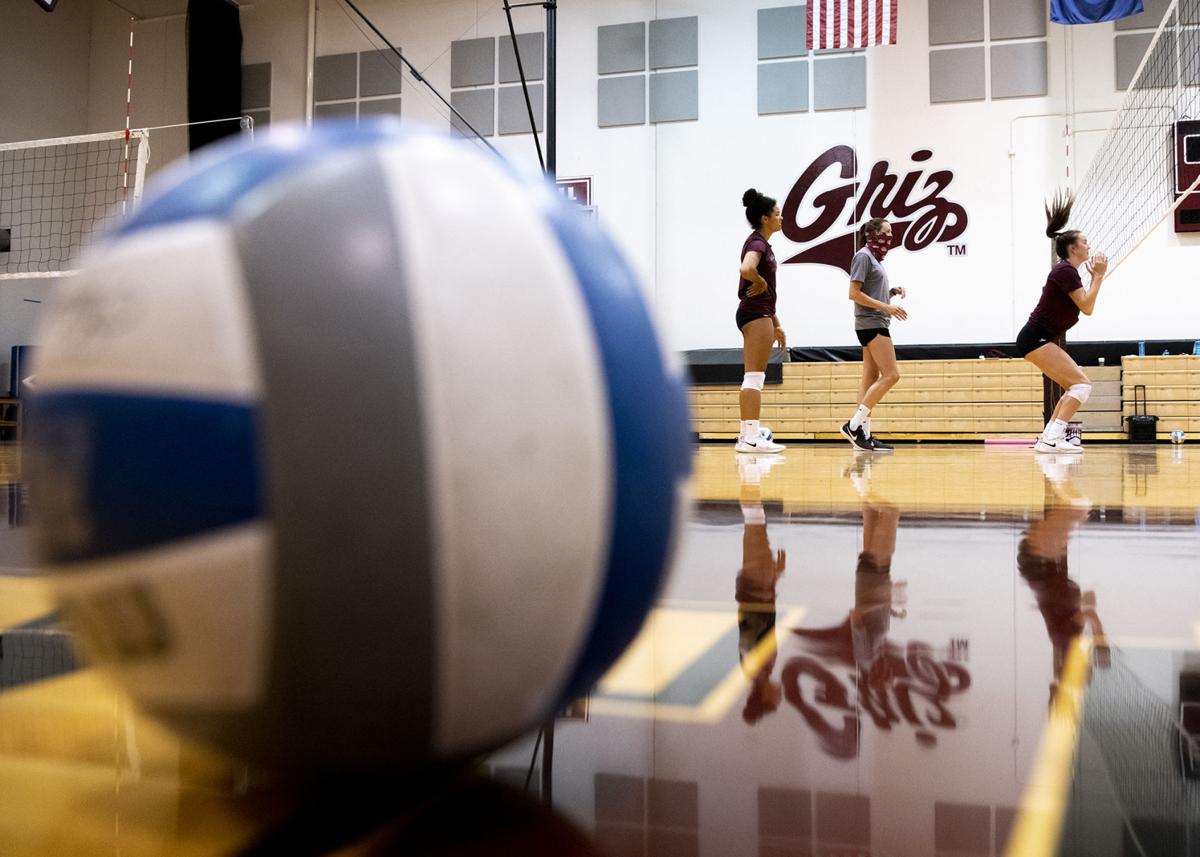 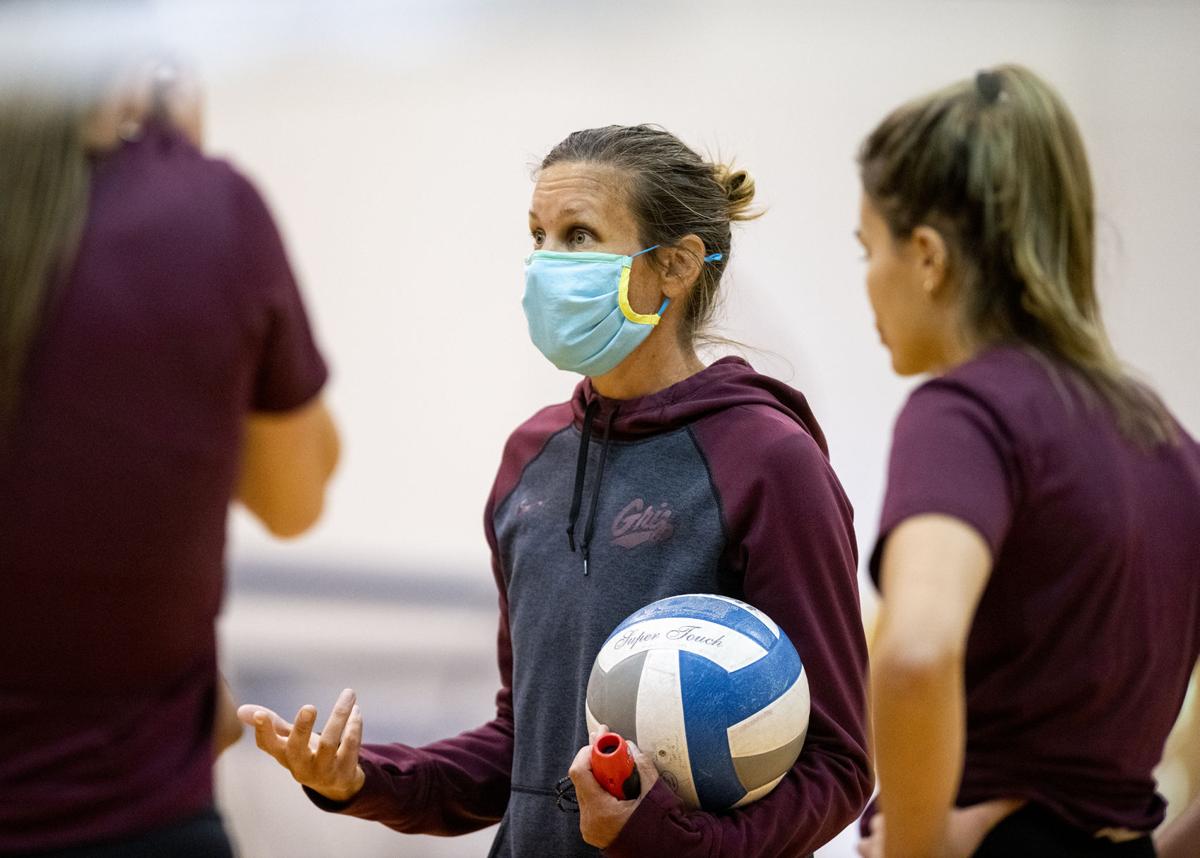 Montana volleyball coach Allison Lawrence speaks to her players during their practice on Tuesday at the Adams Center. The fate of the 2020 Big Sky Conference volleyball season will likely be determined Wednesday. 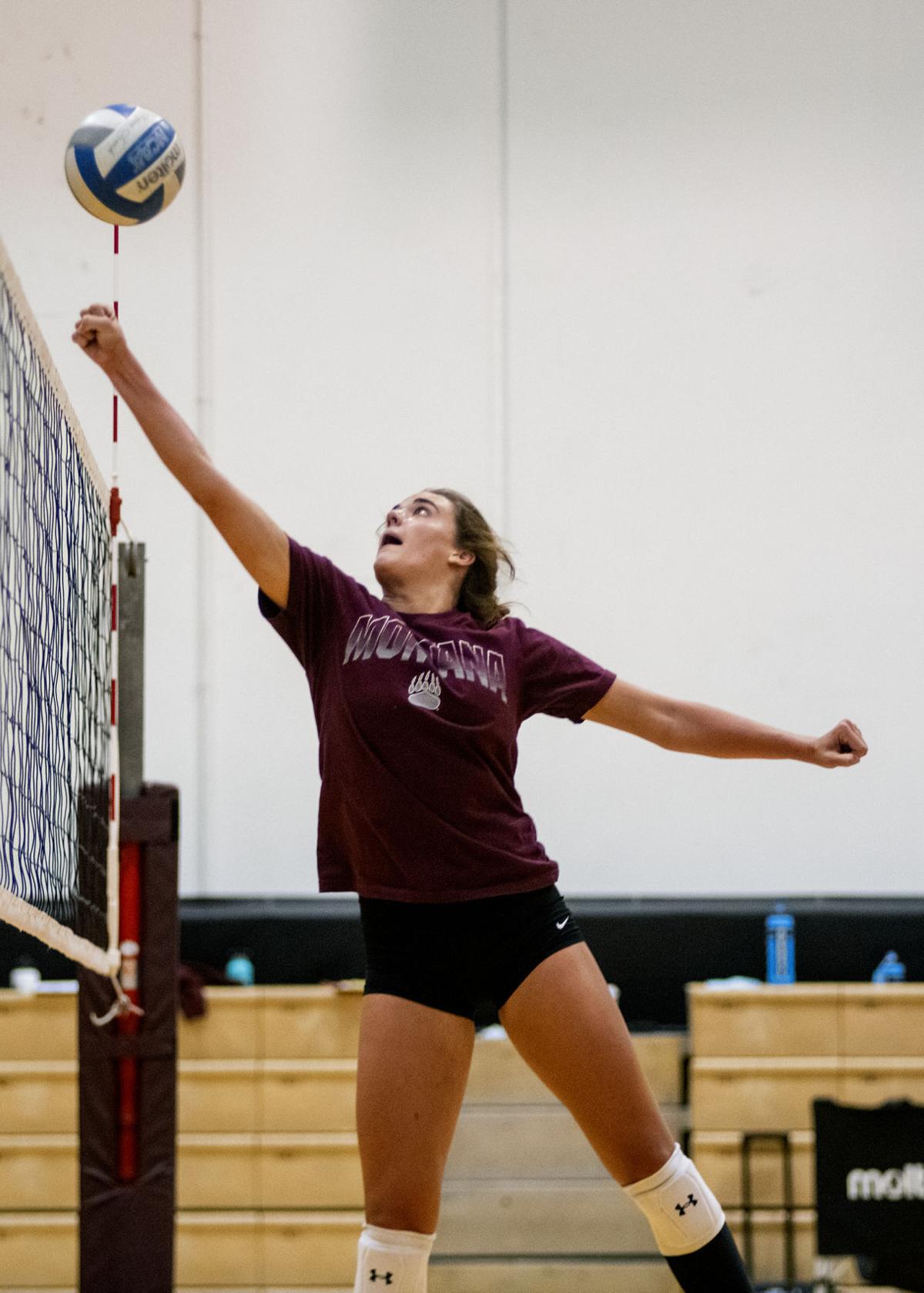 Montana Grizzly junior setter Jordyn Schuette hits the ball over the net during practice on Tuesday.

Montana volleyball coach Allison Lawrence speaks to her players during their practice on Tuesday at the Adams Center. The fate of the 2020 Big Sky Conference volleyball season will likely be determined Wednesday.

Montana Grizzly junior setter Jordyn Schuette hits the ball over the net during practice on Tuesday.

MISSOULA — For the fleeting hours when the Montana Grizzly volleyball team is practicing on the court in the West Auxiliary Gym, things are normal.

Coaches and training staff are wearing masks, of course, as are the players who aren’t scrimmaging or taking part in drills. The players still have to remind themselves they cannot high-five or celebrate closely during a point and there are other reminders of the coronavirus pandemic in the background.

But they are playing and practicing and for them, that means quite a bit right now.

“I think all of us underestimated how good it would feel after so many months of being restricted to just move, to be together,” UM volleyball coach Allison Lawrence said after a Tuesday morning practice.

“Like to laugh with them has retroactively changed my last four months in a way that I'm so thankful to them … it’s so good to be not only in a routine, but together. And I think it puts us at peace where regardless of what happens with our season, we're together and we're able to enjoy doing what we love.”

Montana got started with official practices on Monday after volleyball players were allowed into the Champions Center a few weeks ago. The football team has been in the facility since early June with the other sports tentatively scheduled to get in the mix later in the summer.

As of now, the Big Sky volleyball season is still a go. The first day of competition is set for Sept. 18, with the Grizzlies scheduled to host Montana State.

The Big Sky football season, of course, has been moved to the spring. Eastern Washington announced on Monday they will have no fall sports.

Erasing the Eagles from the schedule leaves the UM volleyball team with 15 matches in a modified schedule. The Grizzlies are slated to play seven dates of back-to-back conference matches, along with an extra against the Bobcats.

Volleyball coaches around the conference had input into the scheduling changes, which mostly were to help cut down travel and play more matches against opponents closer to home.

“I really like our adjusted conference schedule,” Lawrence said. “There's parts of it that are so, so new with the back-to-back …

"I think that it'll challenge us to really prepare differently. And it'll create a lot more opportunity for some upsets and some really close exciting matches.”

She added: “I think it's an appropriate change that feels like it has safety in mind as well. We're not traveling in between and all over.”

Lawrence and her team have no idea if they’ll be able to play in the fall. Griz soccer and cross country are in a similar situation. A decision by the Big Sky Presidents Council is expected Wednesday.

There is a small glimmer of hope.

“It sucks that football is canceled, but if volleyball gets to keep going, we’ll be, like, you know the team for the town and that’s a big responsibility that I don’t think a lot of people think about,” redshirt senior transfer Peyten Boutwell said. “So I’m pumped, if that’s what ends up happening … that’ll be all on our shoulders and that’s what we’re training for.”

The players know at least part of potentially playing rests on keeping themselves healthy. Mask usage has been vital and the coaching staff is proactive about it.

Constant sanitizing of equipment is also important and even things like how they enter and leave the practice facility have been carefully planned out. Players also get their temperature checked and go through a screening before they are allowed inside the facilities to workout or practice.

With volleyball being such an emotionally charged sport, one of the biggest challenges has been avoiding celebratory contact.

“We're such a close team and not being able to go and like hug each other all the time has been strange,” Griz redshirt sophomore and Missoula Sentinel product Elsa Godwin said. “And like, we still try to give high fives but we're not necessarily supposed to all the time. It's not having that natural connection that has been kind of weird.”

The constant shifts and changes have been tough on athletes and coaches both, but they have been able to make the most of the situation.

“I think collegiate athletics in general prepares us for these types of moments,” Lawrence said. “I think you go into a season, imagining how it's all going to play out. And then you can have injuries you can have, or a player gets sick, you know that there's all kinds of scenarios where you're very much not in control.

Eastern Washington bailed out on all fall sports, but will the rest of the Big Sky Conference follow suit? We will likely find out Wednesday.