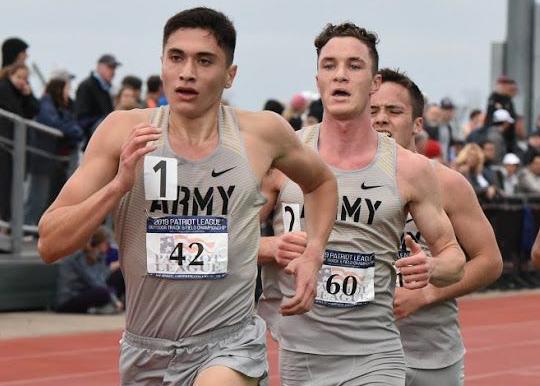 Missoula Sentinel grad Marshall Beatty (No. 42) accomplished a rather unusual and impressive athletic/military feat at West Point recently. In this photo Beatty is shown competing for the track team in a meet this spring.

MISSOULA — With the Fourth of July looming, the timing seems right to celebrate one of Missoula's most impressive cadets on his unusual athletic achievement at West Point.

It's not your typical headline grabber, although Marshall Beatty has racked up his share of those as a freshman member of the cross country and track teams at the United States Military Academy. In early May he won the 10K and took third in the 5K at the Patriot League Championships.

But this is different. Off the radar, if you will.

Beatty pushed the limits of his athleticism this past spring in a test called Cadet Field Training (CFT). It's sort of a military version of Cross Fit, which is a high-intensity fitness program incorporating elements from several sports and types of exercises.

There's a lot of hurdles, literally and figuratively speaking. You have to complete a nasty obstacle course and meet requirements for push-ups, dead lifts, shuttle runs, heel-to-bar crunches and even a rifle marksmanship test.

The hardest part is a 12-mile run, called a ruck march, in which the cadet is saddled with a heavy back pack and required to finish in under 2 hours and 45 minutes.

"It was pouring rain and there's endless uphills and downhills," Beatty told 406mtsports.com. "We thought we'd be fine if we just ran the downhills and stepped out the flat and uphills.

"But because the course was longer than it was supposed to be, we had to run a lot of it. It was a little bit ridiculous because those five people that made it under the time stamp are all my teammates and all Division I cross country and track runners. We're designed for stuff like that. There were other cadets that have different abilities and it seemed like an impossible feat for them."

Beatty did more than just meet all the CFT requirements. He had the highest score out of his entire class of 130 cadets.

Marshall was presented with an award called the Recondo badge. To put his feat in perspective, he was honored in a parade.

The ultimate reward is a ton of options when he graduates from West Point. Someday he'd like to be an infantry platoon leader, go to Ranger School and apply for Special Forces selection.

But before that, he has big goals for his sophomore cross country and track seasons. He wants his name to be remembered for a long time in West Point, New York.

"My goal for being at the academy is to break a lot of the track records that have been standing for a long time," said Beatty, who focuses on the 10K and 5K, where he ran a personal-best time of 14 minutes, 11 seconds at a Bucknell meet in mid-April.

"For my sophomore cross country season this fall, we're shooting for our team to go to NCAA nationals. We were close last year and if we don't make it as a team, I'd like to make it as an individual."

Considering Beatty's dad ran for the Montana Grizzlies and his mom for the Washington Huskies, it's not surprising Marshall is a stellar athlete. But what he accomplished in earning the Recondo badge, including attaining expert shooter status, is special.

He may not get any parades in Missoula. But he probably deserves one for his commitment to excellence and his country.