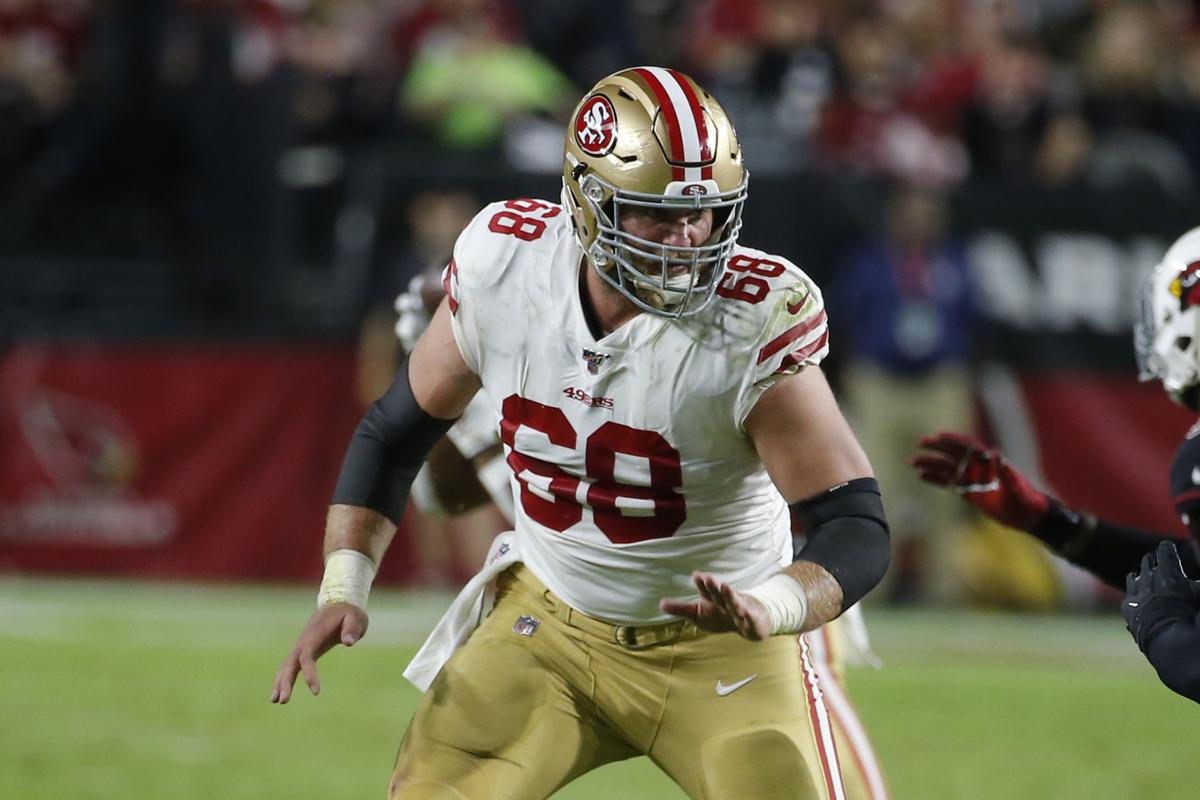 49ers guard Mike Person blocks in a game against the Cardinals during the 2019 season. Person, of Glendive, announced his retirement on Sunday. 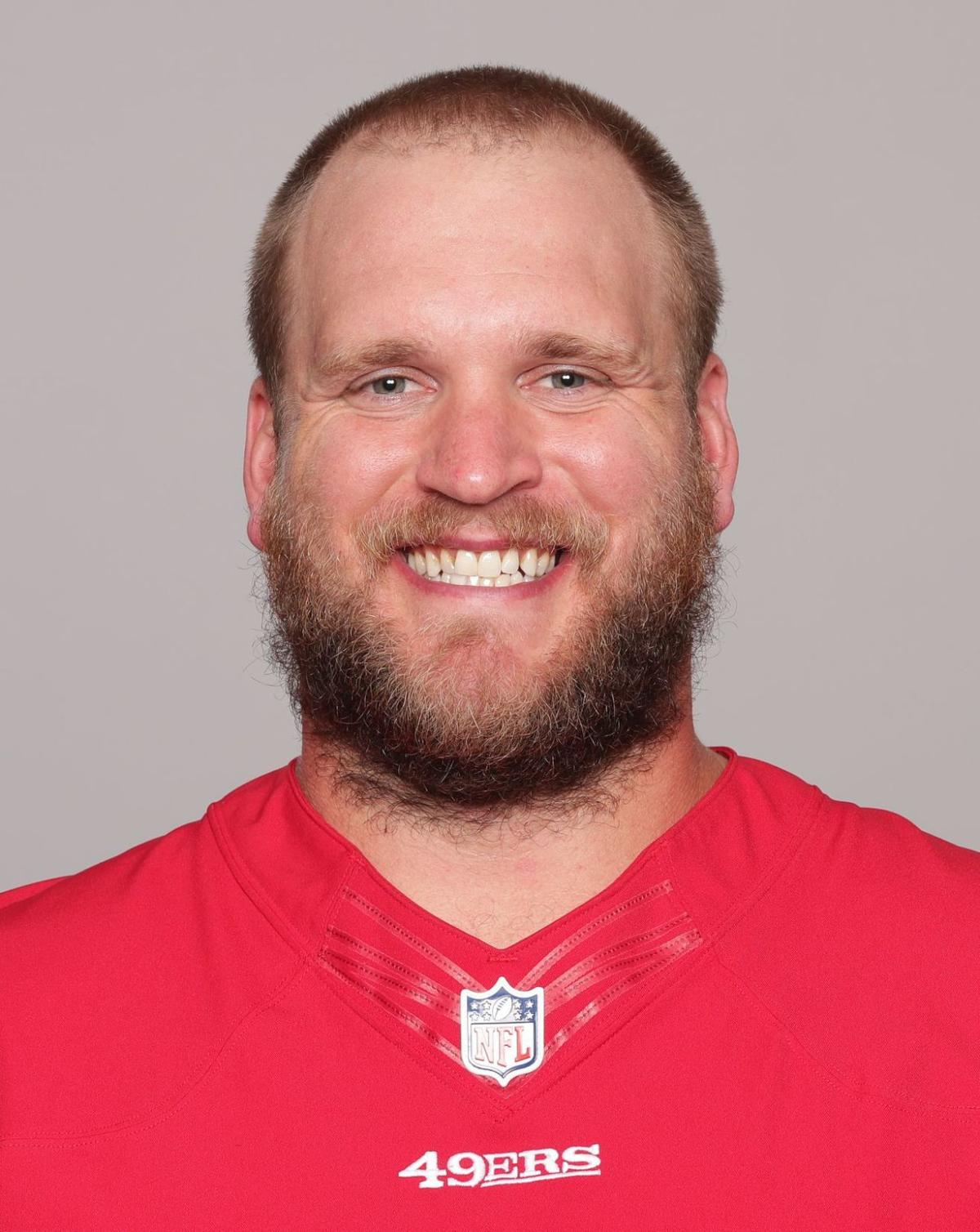 BILLINGS — Mike Person was preparing to embark on a guided fishing tour Sunday on the Muskegon River in Michigan in search of rainbow and brown trout, a Father’s Day gift from his wife, Kelly.

But he wanted to make an official declaration beforehand: Person, a Glendive native and Montana State product who spent nine years in the NFL and started at right guard for the 49ers in Super Bowl LIV in February, announced his retirement from professional football to 406mtsports.com.

Citing aches and pains and a desire to spend more time with his wife and three growing children, Person, 32, said it took a few weeks to arrive at the decision to retire after being released by San Francisco in March.

But he also said he is at peace with it.

“I just feel like now is the right time,” Person said during a phone interview. “Obviously I wish it would have ended differently, especially this past season. You take a beating, and anybody who’s played knows that. At some point you just have to tell yourself now is the right time.

“My kids are getting older and most likely I’d spend the entire season away from them if I were to sign with someone. I’ve missed too much already.”

Person currently resides in Columbus, Ohio, with his wife and their kids Sean, 5, Nora, 3, and Eli, 1. He opted to retire despite multiple offers from other NFL teams.

Person was a seventh-round draft choice of the 49ers in 2011, and spent time with the Seahawks, Chiefs, Rams, Falcons and Colts before returning to San Francisco in 2018. It was there that Person had his most sustained success, starting 30 games and helping the 49ers win the NFC championship last season.

Person played all 58 offensive snaps for San Francisco in Super Bowl LIV in Miami against Kansas City. The 49ers were in the lead with less than six minutes left, but ultimately surrendered 21 unanswered points in the fourth quarter and lost 31-20.

“It’s crazy. You make it there and you’re on top of the world. And then you lose, especially in the fashion that we did, it is one of the most demoralizing things,” Person said. “It was tough to get over. To be honest with you, I don’t know if I am over it quite yet, or if I ever will be.

“If you play football, that’s what you dream of, winning a Super Bowl. We were close. We just didn’t make the plays when we needed to.”

The 49ers released Person on March 19, which reportedly saved the team $2.5 million in salary cap space. Person had two years remaining on a three-year, $8.2 million contract extension he signed with San Francisco after the 2018 campaign.

Person had been cut before, but this time, he said, was different.

“It was definitely unexpected, but that’s the way it goes,” he said. “You have to deal with it and move on. There’s not many guys who have never been cut.”

Person said he took a few weeks to come to his decision.

“It was in the back of my mind. I knew once this contract played out, if it had, that I would retire,” he said. “It’s one of those things where 75% of you wants to be done with it but there’s that 25% that knows you can still do it and still play.”

Person said he took a month off after the Super Bowl and that he started to feel better physically. But once he resumed his workouts the same aches and pains returned.

He said he still has trouble with the neck injury that sidelined him for the last two games of the 2019 regular season, along with problematic knees, elbows, wrist and other general wear and tear.

“You have to weigh how your body feels,” he said, his voice seeming to crack a bit. “And it’s not feeling great, to be honest.”

During his career, Person was cut from three teams that eventually went on to play in the Super Bowl — the 49ers in 2012, the Seahawks in 2013 and the Falcons in 2016 — before finally getting his chance in the big game last season.

In all, Person played in 73 games in the NFL with 48 starts. He appeared in three playoff games.

His versatility and ability to play different positions along the offensive line, including center, made him valuable during his journeyman career.

He started 35 games in a row on the offensive line at Montana State under coach Rob Ash, and helped the Bobcats win the Big Sky Conference championship as a senior in 2010, a year in which he was named an All-American.

Before that, Person was an all-state player at Dawson County High School in Glendive, from where he graduated in 2006. His dad, Jim, was his high school coach.

“If I had to use one word it would be ‘chaotic,’ just because of all the ups and downs that I had,” Person said, summing up his career. “I didn’t quite get the highest of highs that you can possibly have, but I had some big highs and I had some low lows. They tell you constantly that it’s a business but you don’t realize it until you are actually in it.

Person said he and his family plan to remain in Ohio for the time being, but that he is mulling over what he wants to do next.

If possible, Person would like to remain involved with football, either as a teacher and coach at the high school level, or perhaps in college or the pros. But the ability to settle down and not move every two or three years is appealing to him.

As is the time he’ll now be able to spend with his family — and the potential for solitude on the river with his fishing pole.

“I’ll fish as much as I can,” Person said with a light laugh. “I’m going to try to make up for some lost time, both out here and at home.”