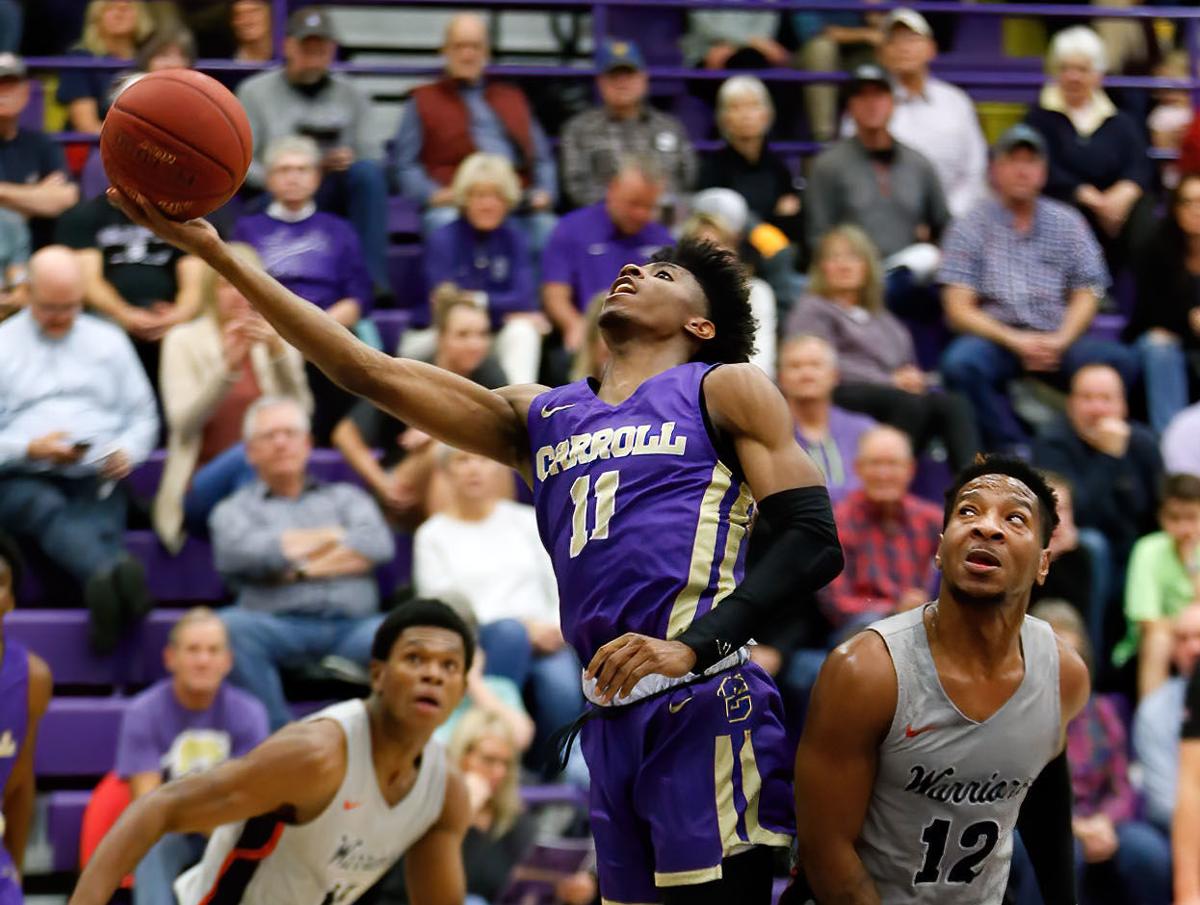 Carroll’s Dennis Flowers is fouled by Lewis-Clark State’s Damek MItchell as Flowers drives to the hoop Friday night at Carroll. 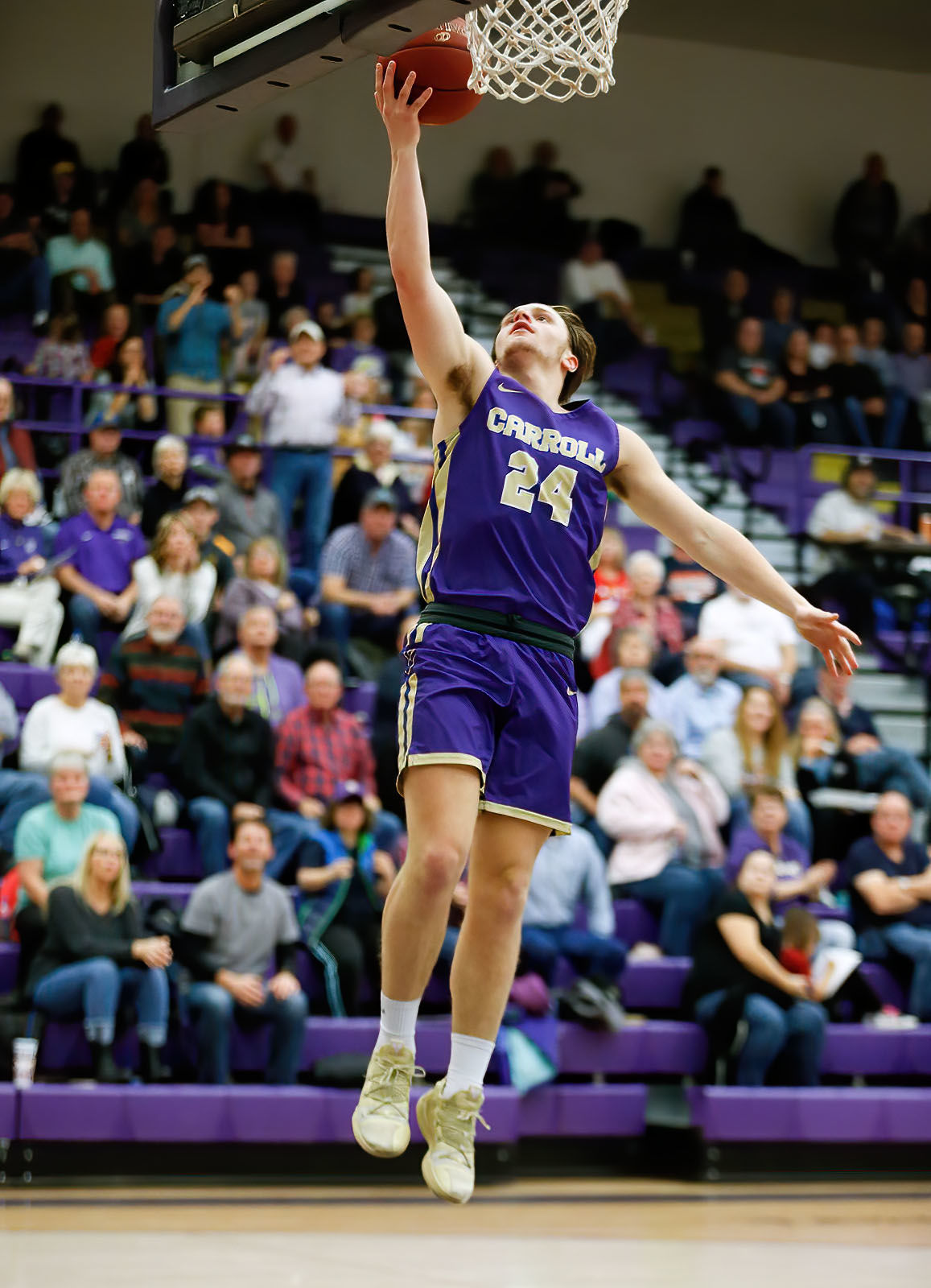 Carroll’s Jonny Hillman goes in for a layup after a steal Friday night at Carroll.

Carroll’s Dennis Flowers is fouled by Lewis-Clark State’s Damek MItchell as Flowers drives to the hoop Friday night at Carroll.

Carroll’s Jonny Hillman goes in for a layup after a steal Friday night at Carroll.

HELENA — Carroll College senior guard Dane Warp cracked a smile as he came out of the locker room.

Just three days after hitting three game-tying free throws with 0.6 seconds left to help clinch an overtime victory over Montana Tech, he scored a game-high 26 points against No. 14 Lewis-Clark State.

More importantly, his team came away with a 78-69 win in front a raucous crowd at the PE Center.

“Not bad,” Warp said, cracking a smile again. “We are a young team, but we are responding to adversity very well. The last two games have been really tight games. I think it going to help us out later.”

No one knew what to expect from Carroll this season.

The defending NAIA runners up brought in eight true freshmen and were picked by the Frontier Conference coaches to finish fourth this season.

Even coach Kurt Paulson said there were plenty of unknowns heading into this week.

You just don’t know how the guys are respond,” Paulson said. “They just came out and played hard.”

The Warriors entered the night ranked No. 14 in the NAIA Coaches Top 25.

They had a win over NCAA Division I Idaho.

And they showed why jumping out to a 16-12 advantage over the first eight minutes.

But Warp wouldn’t let the game get out of hand.

His team was still trailing 21-15 after Lewis-Clark State’s Travis Yenor hit a three but he had nine of the team’s 16 points.

As the first half continued, Carroll crept closer after he got a little help.

Freshman point guard Dennis Flowers III drove the lane to cut the deficit down to three points and then sophomore forward Jovan Sljivancanin scored a pair of baskets to put the Saints on top.

Carroll ended the half on an 8-0 run that saw a 3-pointer from Flowers III and a break away layup by Jonny Hillman.

Sljivancanin ended the half with a 3-pointer that electrified the student section as the halftime buzzer sounded.

“Jovan had a good week too,” Warp said.

Of course, he was talking about 25-point performance against the Orediggers on Tuesday.

“He presents an interesting matchup for teams,” Warp said. “He is extremely crafty and I think a lot of people under estimate him.”

The combination of Warp and Sljivancanin pushed the Saints throughout the second half.

Sljivancanin hit a hook shot in the paint to put the Saints ahead by eight points while Warp put on a nifty up-and-under play to catch the Warriors off guard.

Still, Lewis-Clark State did not go away.

Guard Josiah Westbrook hit a 3-pointer in the corner and wouldn’t let the Saints’ advantage get higher than six points.

But as time was running down, Sljivancanin and Warp stepped aside for freshman Dennis Flowers III.

He hit a pull-up 3-pointer with five minutes left and drove through teeth of the Warriors defense to put the Saints ahead by six points with 73 seconds left.

“My teammates just always encourage me in practice and never to stop shooting,” Flowers III said. “Hitting some layups early really helped and by the end I was just confident.”

Carroll’s win is the fourth in six games dating back to last season.

While the Saints start the Frontier a perfect 2-0, now they take a break as they head down to Glendale, Arizona starting on Dec. 14 to participate in the Catus Classic.

“These are some good teams that we are going to see,” Warp said. “Now, we have to go back and put some good work in practice.”