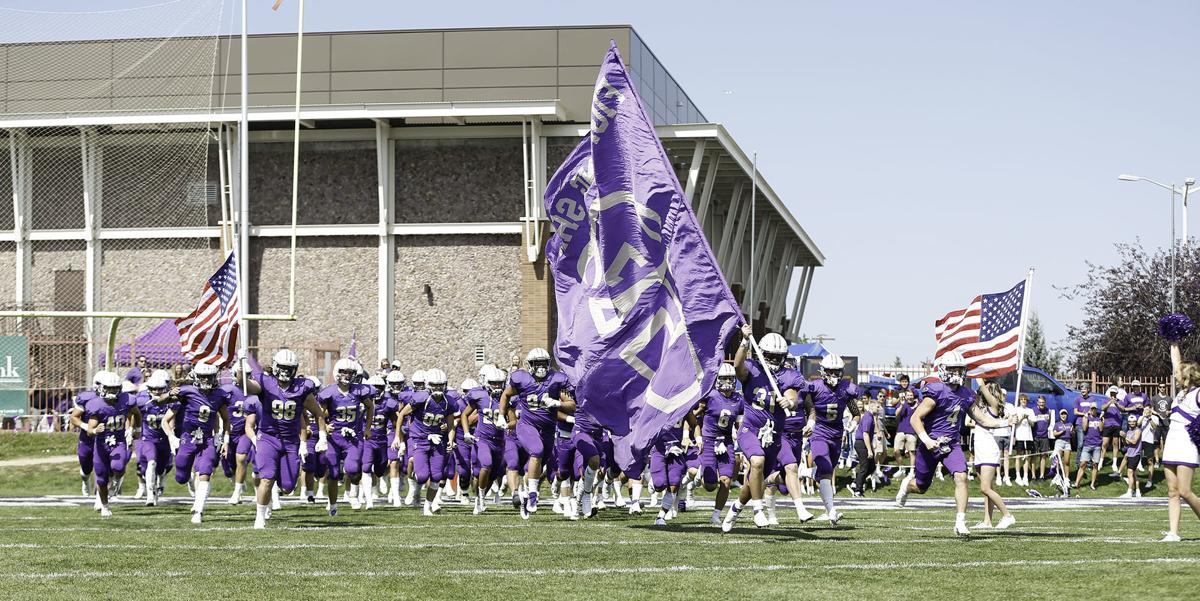 Carroll's football team takes the field before a game against Montana Tech earlier this season.

Pictured: A team believed to be the 1957 Carroll football team.

HELENA — Carroll is a school rich in football tradition. The sport has been played at the college for more than 100 years and it is a program with more than 500 all-time wins. On Thursday, just before the current Saints team took the practice field in preparation for its next-to-last home game of the season, the players gathered to share in some of that tradition.

Ted Lechner, a former football player at Carroll and a member of the 1957 and 1958 teams, passed away in September. He was an all-conference player for the Saints and was elected into the school’s athletic Hall of Fame in 1975.

To honor their friend and former teammate, Jerry Loendorf and Con Lacey met with the Carroll football team to talk about Ted and share some memories. They also asked the players to play in memory of Ted this weekend against Southern Oregon.

“This team plays like Ted,” Loendorf said. “Ted was one of those guys that never gave up, always played till the whistle. Just played tough all the time. I told [the team] about some tackles that he made. Con has a grandson on the team, Ted Lechner has a grandson on this team. Some of us guys who are survivors of that team — there aren’t many of us left — but something we could do for Ted is to have a football game played [in his honor].”

Lacey, the grandfather of Connor, Nate and Thomas McGree and whose father played football for Saints, described Ted as “a different person” on the football field. Due to shoulder injuries, Ted was forced to stop playing football during his sophomore year, but stayed at Carroll, graduated, and ended up earning a Master’s degree from the University of Washington School of Social Work.

“Two things we kinda focused on [with the team] was the kind of player he was. Just one of those guys that never quit,” Loendorf said. “Was tough on the field, but he was a very kind person, too. He was your friend, your teammate, but also a special friend and a special teammate.”

To Liam Lechner, a redshirt freshman kicker on Carroll’s current football team, Ted was more than a teammate and friend, he was family. Liam is Ted’s grandson, and even though he said his grandfather was a humble man about everything, including his playing days, Liam said Ted loved playing football and loved doing it for the Saints.

“It means a lot. He played here and is in the Hall of Fame here. I’m sure that he’ll be watching over the team this weekend as we take on Southern,” Liam said. “I’m sure that it would make him really happy to have all of us come together and play this weekend for him.”

Carroll sang the fight song prior to taking the same practice field many Saints teams of the past have utilized and sweated on to get ready for games.

“The tradition around here has just been unbelievable,” Carroll head coach Troy Purcell said. “The tradition and the blood, sweat and tears on this field of the older Saints. Then with the new Saints coming in and continuing that legacy and tradition of excellence around here and the quality of football and the quality of developing young men...It’s really fun playing for everybody that played in the past.”

Currently 4-4 on the season, Carroll is looking to get over .500 for the first time this season. Southern Oregon, at 3-5, is the Saints’ opponent on Saturday, a team Carroll has not beat since 2015 (6 games). The last two times these teams have matched up, the Saints have fallen by a single point, including a 34-33 loss on the road earlier this season.

The Saints will carry all the momentum into this game having won three of their last four contests. SOU enters on a three-game losing streak, while Carroll is averaging better than 32 points per game over its last five.

“I would love to get a win for him,” Liam said. “Win or lose, he’ll be happy that we played the game for him, but I would like to get him a win. I think that would be a lot of fun.”

Carroll kicks off with Southern Oregon on Saturday at 1 p.m. from Nelson Stadium.