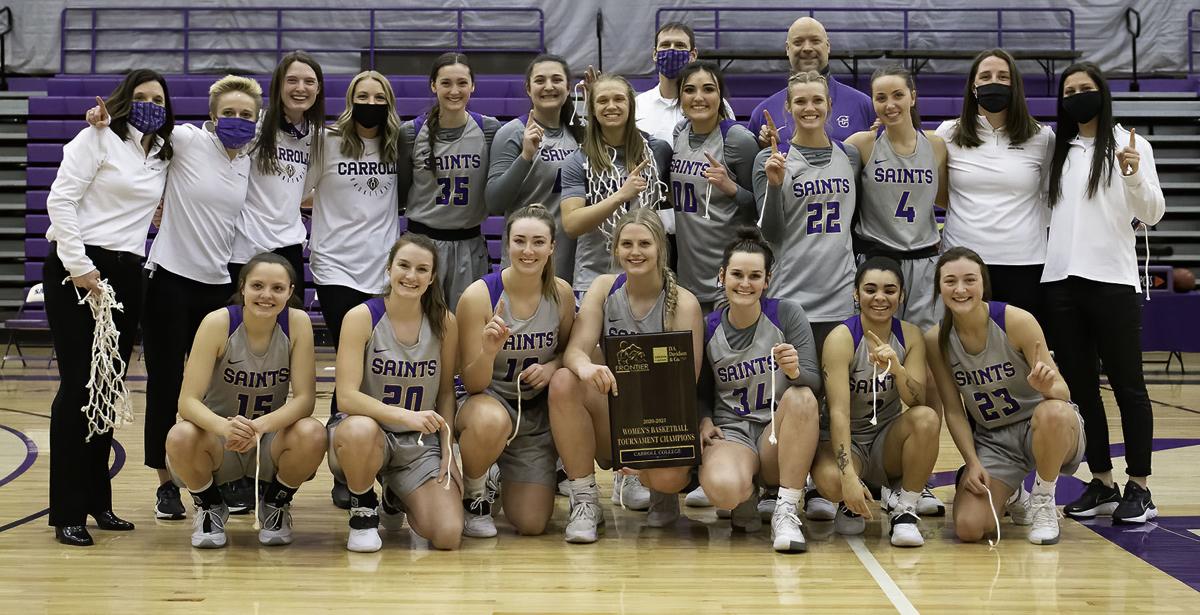 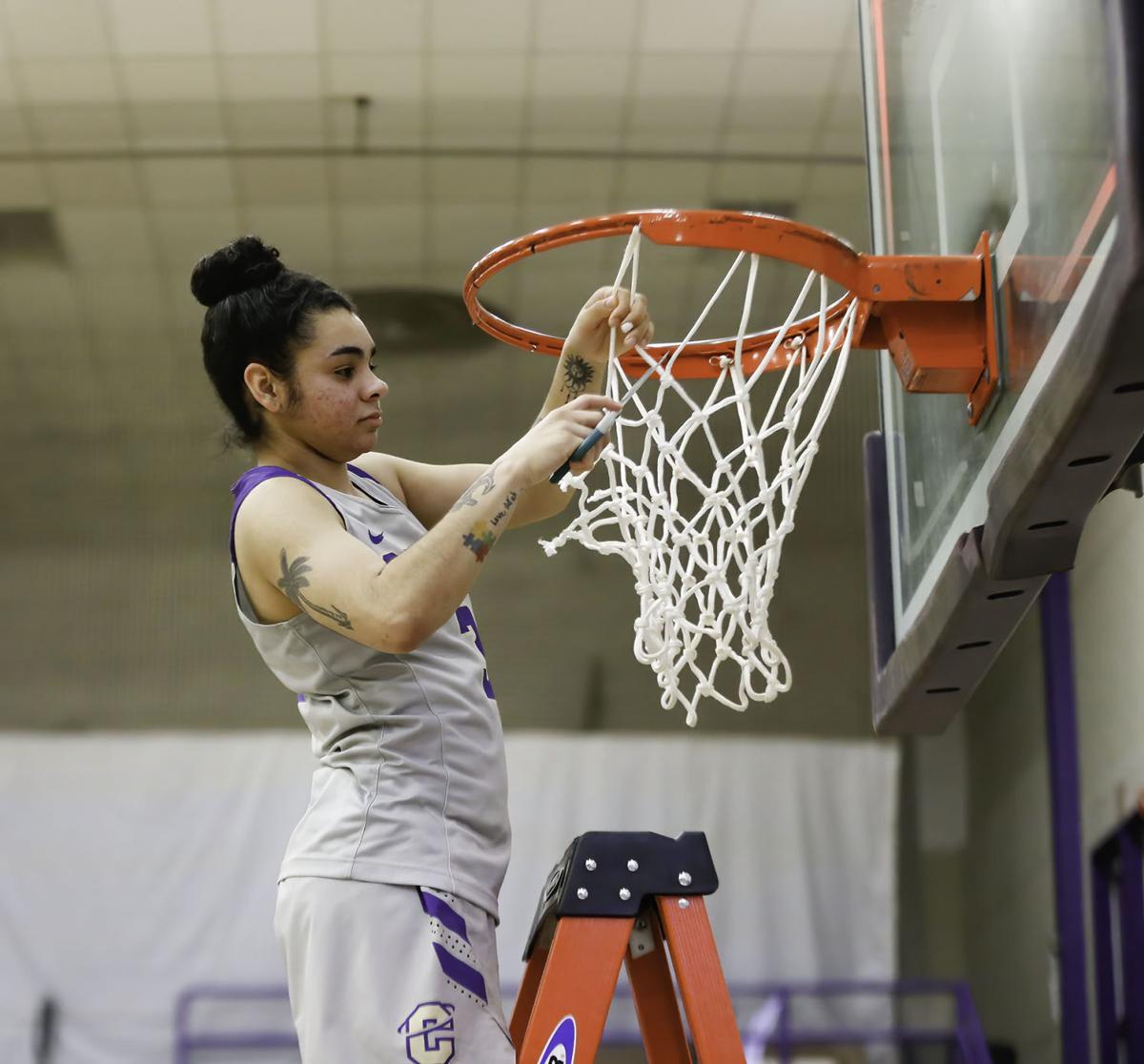 Jaidyn Lyman is shown cutting a piece of the net after she and Carroll downed Western in the Frontier Conference Women's title game Monday night in Helena.

Jaidyn Lyman is shown cutting a piece of the net after she and Carroll downed Western in the Frontier Conference Women's title game Monday night in Helena.

HELENA — For the third time in four seasons, the Carroll women’s basketball team laid claim to the Frontier Conference Tournament Championship. A 70-62 win over Montana Western on Monday night inside the PE Center helped the Saints accomplish that and finish the league slate at 21-2.

“It’s pretty special,” senior Danielle Wagner said of the win. “We came out tonight firing and we were confident and aggressive. It was pretty amazing, the energy was contagious and it just followed through the whole game.”

Intensity, intensity and more intensity was the story for the Saints early in the ball game. Without fans in the stands, Carroll’s bench carried plenty of energy to go around as the players on the court built a sizable advantage.

Carroll owned a 25-point lead by halftime, but Western, with their pressure and zone defense, battled back, getting within two possessions down the stretch.

“We knew we had to come out and be the better team right at the beginning,” Wagner said. “They’re a great team, obviously that’s why they’re in this position, and they’re a great defensive team and we knew we had to do the little things correctly. For us to start that first half and be up by 25 [points] was just huge for us going into that second half, especially with our legs getting tired.”

The Saints’ senior class, however, stepped up and led Carroll through, even after point guard Kamden Hilborn fouled out in the fourth quarter.

Playing in their third league championship game, seniors Danielle Wagner and Christine Denny combined for 30 points on 10-for-25 shooting. Denny notched a double-double with a team-high 18 points and 10 rebounds, while sophomore Jamie Pickens added 17 points and 12 rebounds for a double-double of her own.

Pickens scored the first seven points of the contest for Carroll and had 12 points by halftime. Her 5-for-5 shooting in the opening 20 minutes helped the Saints shot 54.8 percent from the field and over 43 percent from 3-point range.

Carroll’s defense kept Western to just 20 points in the first two quarters as the Bulldogs shot 23 percent from the field as a team. The Bulldogs made their run at Carroll in the third quarter, cutting the lead down to 13 points at one time. Senior Jaidyn Lyman, however, banked in a 3-pointer at the third quarter buzzer, stretching that advantage back to 16 points.

“For us, we were scoring, Western was having trouble getting stops and that kind of affected their offense,” Saints head coach Rachelle Sayers said. “Then they were pretty apprehensive, they weren’t as aggressive offensively and then all of a sudden they started turning us over and getting stops on us then it was the flip side. We became apprehensive on offense because we weren’t able to get stops and the two were kinda working together.”

As Carroll went cold from the field in the second half to the tune of 21.4 percent shooting, Western continued causing havoc and finding the bottom of the net. Junior Brynley Fitzgerald and redshirt senior Paige Holmes each finished with 16 points. Fitzgerald got 12 of her’s at the free throw line on Monday as she shot just 2-for-10 from the field.

Nevertheless, in the waning minutes of the fourth quarter, Western found itself right back in the game, but unable to convert on several attempts to draw closer and potentially grab the lead. Carroll knocked down its free throws late, finishing the contest 15-for-18 from the charity stripe to hang on despite being outscored 42-25 in the final 20 minutes.

“We just tried to stay disciplined on defense,” Wagner said. “When we got the ball on offense, we could have as many good shots as we wanted, but we were looking for the great shot and just to get it in the person’s hands who was hottest at that moment.”

Lyman gave Carroll eight points off the bench in what was also her third league championship game to go with three assists. Junior Sienna Swannack finished with two made 3-pointers and six points, but paced Carroll with four assists in the win.

Sophomore Shainy Mack was the last in a trio of Bulldogs to break double digits on Monday. Her three 3-pointers helped her score 11 points, while Holmes narrowly missed a double-double with nine rebounds.

For the game, neither team shot better than 40 percent despite Carroll’s quick start, but the Saints did out-rebound Western 46-27 overall and 17-7 on the offensive glass. Pickens helped the Saints hold a 10-point advantage on points in the paint at 28-18 and Carroll converted its slew of offensive boards into 21 second chance points.

With what will go down as Carroll’s 10th-straight win, the Saints also finished off the regular season and tournament title sweep, a feat they last accomplished during the 2017-18 season. The Saints also moved to 11-0 inside the PE Center this season and will now have to wait until the NAIA Selection Show on Thursday to find out their National Tournament seeding and next opponent after locking up an automatic bid with a win on Monday.

Until then, it will be all about celebrating for a Carroll team that has checked off two of the three items on its to-do list this season. Next box to check: national title.

“I don’t know that I’ll ever coach a better group of kids, and not just as players, but as people,” Sayers said. “Their commitment to our school and program and to me, is second to none. I hope they all come back, but if they don’t, I hope this is a year that is memorable as it can be because they deserve it. Couldn’t be more proud of them and it was just really special to be able to share that ceremony, cut down those nets, hold up that trophy, with just our group.”