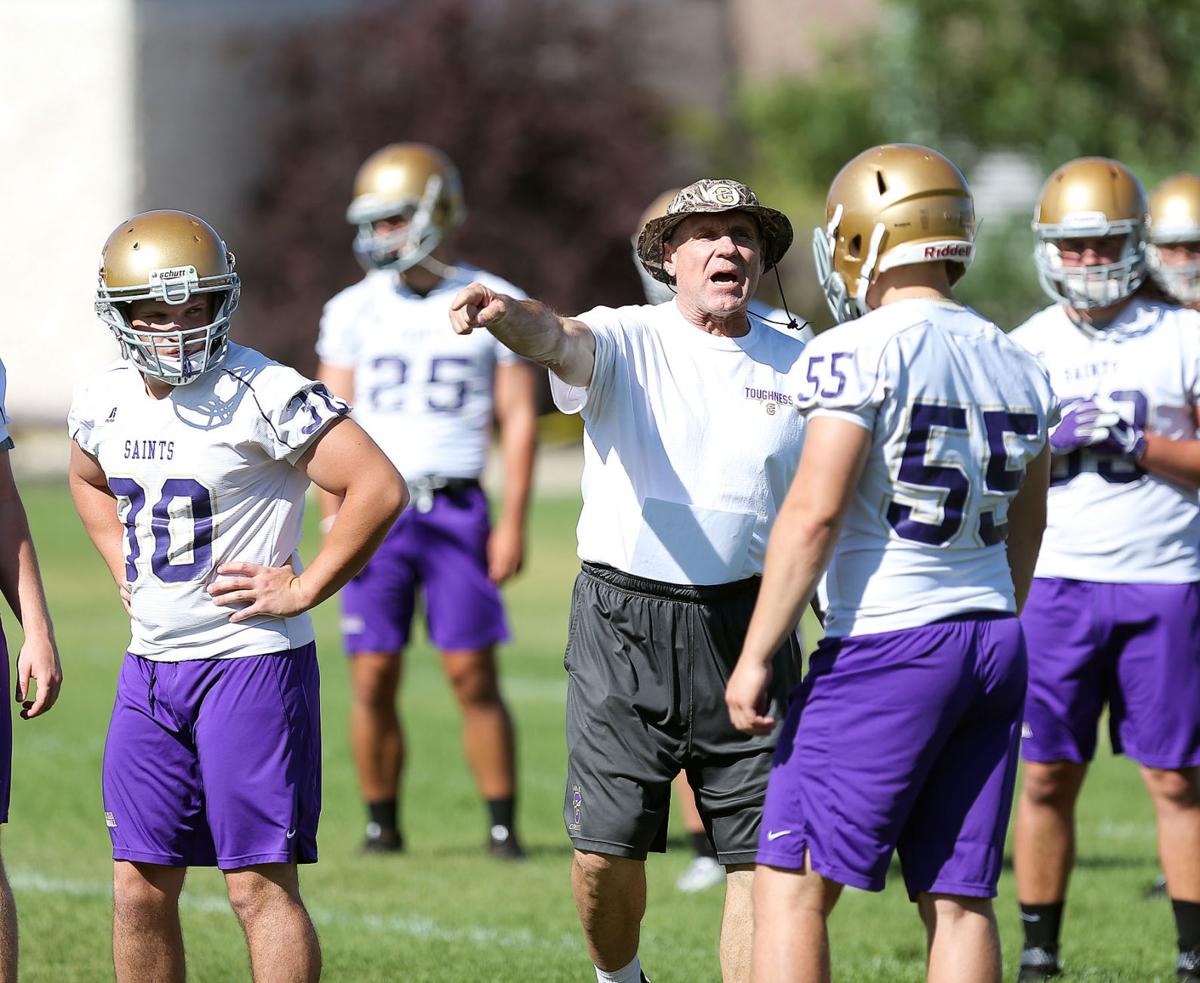 Mike Van Diest directs his players during a practice in the fall of 2018. 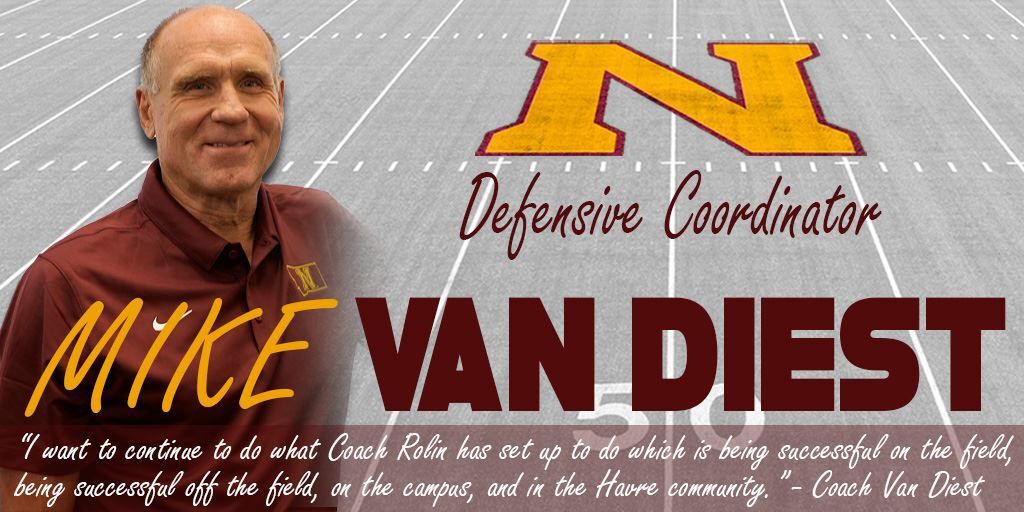 “For the last couple years, I’ve been watching film by myself on a laptop in our kitchen,” Van Diest said in a phone interview on Tuesday. “I’ve got our kitchen table covered in white notebook pads. I’ve got film here and there and I’ve been talking to different college coaches that are friends of mine around the country...You’re never too old to learn. I’ve been trying to stay on top of the game, I’ve been watching film. I’ve taped a lot of games off of ESPN.”

He accepted a job on staff at the University of Mary in early 2020, but after the team’s season was canceled due to the COVID-19 pandemic, Van Diest spent his fall volunteering with Helena High’s football program.

That is what Van Diest was focused on and prepared to do for another fall, that is until Montana State Northern head football coach Andrew Rolin came calling a couple weeks ago.

Rolin offered the NAIA Hall of Famer the Lights’ defensive coordinator position, and after conversations with his wife Heidi and sons Shane and Clay, Van Diest became the newest member of Northern’s football program.

“Very unexpected,” Van Diest said of the job offer. “A couple people had reached out to me last spring and winter about a couple different opportunities...This was something that was very unexpected, but it was very welcoming once I got the phone call and Heidi and I talked about it. It just seemed like the more I talked about it [with family], the more we kinda put the wheels in motion. It looked like it was an opportunity that would be very, very inviting and something I’m really looking forward to.”

Carroll beat Northern twice in 2018, Rolin’s first season in Havre and Van Diest’s last as top man with the Saints. Up until recently, coaches meetings and various Frontier Conference-related events that season were the only contact the two had.

Van Diest’s decision, however, was aided, at least in part, by the conversations he had with a former player with connections to Northern.

Former Carroll All-American tight end Casey FitzSimmons grew up an hour outside of Havre, and following the close of his NFL career, has been active within MSUN circles.

According to Van Diest, FitzSimmons has a good relationship with Northern’s Chancellor Greg Kegel and was on the committee that recommended hiring Rolin in December of 2017.

With that insight into Northern, Van Diest was thrilled to jump back into the coaching ranks.

“The love of the game really doesn’t leave you if you’ve done it for the right reasons...Coaching is my lifeline, I have a great love for coaching and I’ve enjoyed it,” Van Diest said. “I’ve been at the top and I’ve been at the bottom. It’s not an ego thing, I don’t have to do it to feed my ego but I do it because I enjoy the game and I love the game of football. I love Saturday afternoons.”

Sunday was the newly minted coordinator’s first with Northern and was spent watching film and talking personnel. Getting to know the players and finding the strengths and weaknesses of the defensive unit is an important first step.

Figuring out whether Northern is better suited for a 3-4 scheme or a 4-3 scheme also hinges on where the depth and talent of the personnel resides, according to Van Diest.

Statistically speaking, Northern’s defense has been the league’s worst over the last two seasons. In four games this spring, the Lights allowed 30 points per game and over 430 yards of offense to opponents. The defense also ranked last in the conference in rush defense and opponent third down percentage.

“We’ve gotta earn [the players’] trust,” Van Diest said. “I’m gonna be the third coordinator they’ve had here recently. It’s a lot of new terminology, it’s a new personality. My voice is going to sound different than Rich Stubler and Rich’s sounded different from the guy before him. It’s a matter of those players trusting us and understanding that what we want for them is the best for them.”

Pat Hammond, Dylan Wampler and Joshua Rose were all-conference selections as sophomores for Northern past season season. Wampler and Joel Hadley also paced the Frontier in tackles per game with 12.5 and 10 and were the No. 1 and No. 2 tacklers on Northern’s roster in the spring.

“I am encouraged about the direction we are headed,” Rolin said in an MSU-N press release. “We graduated only one player from the spring. We are bringing in some talented players and we are finally getting to the point where we have experience and maturity, as well as some leadership and ownership of the team.”

Turning Northern’s defensive fortunes around will not be easy. Van Diest will have about a month once preseason practices start to begin installing his scheme before Northern plays College of Idaho on Aug. 28.

Teaching effort is first up on the coaching staff’s mind when the full team reports, and off that, they will begin working on other aspects.

“Effort after the first couple of days is not going to be negotiable,” Van Diest said. “[The players] are gonna have to learn what I believe is effort and what the rest of the coaching staff believes is effort. Once we get the effort down and we don’t have to teach effort anymore, now we can really concentrate on those first three phases of assignment, alignment and technique.”

A hallmark of Van Diest’s defenses at Carroll was how gap responsible defensive linemen and linebackers were. All that stems from assignment and alignment, according to Van Diest, but it will also take great communication to make things move in the right direction.

Van Diest said he and his wife have made various plans for 2022. Before that happens, however, the legendary coach will guide Northern’s defense through an 11-game schedule that includes one non-conference contest.

Oct. 9 sees Northern travel to Helena to face Carroll in what will be Van Diest’s first time back inside Nelson Stadium as an active coach. That day is also homecoming for the Saints.

“I hadn’t given it any thought until I got about 30 messages on my phone last night and this morning from former players...I’ve got business to take care of that day, but that’s a long way down the road,” Van Diest said. “We’ve gotta get ready for College of Idaho to open up the season. I’m excited. They’ve got a beautiful stadium there. It’ll be a great time to welcome the school, the city of Havre and the Hi-Line to that game and open this stadium up the right way.”

“I think I’m going to use the Monday Night Football slogan. Are you ready for some football? We certainly are.” -- Frontier Conference Commissioner Kent Paulson