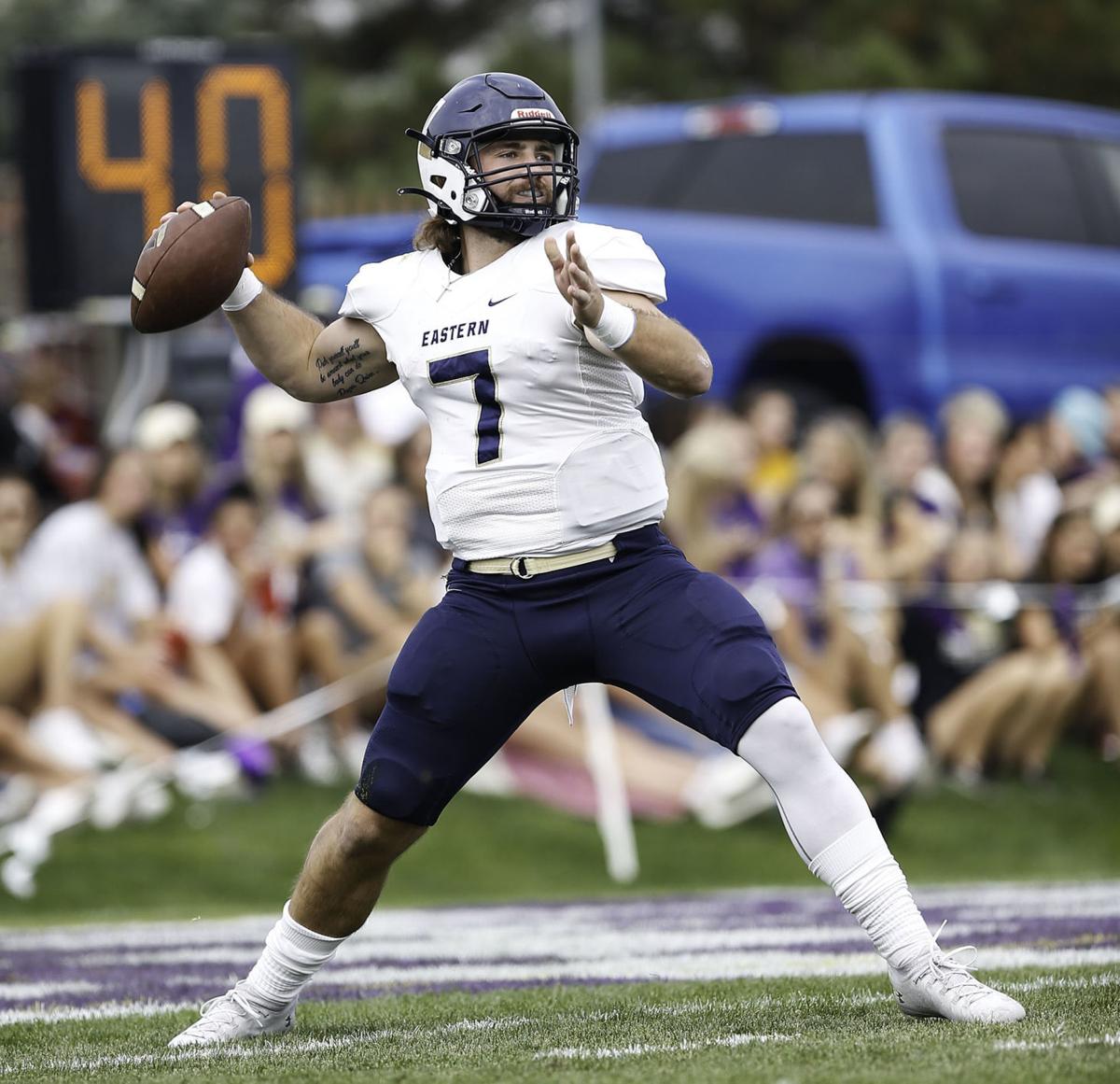 Eastern Oregon quarterback Kai Quinn looks to complete a pass in a win against Carroll last Saturday inside Nelson Stadium. 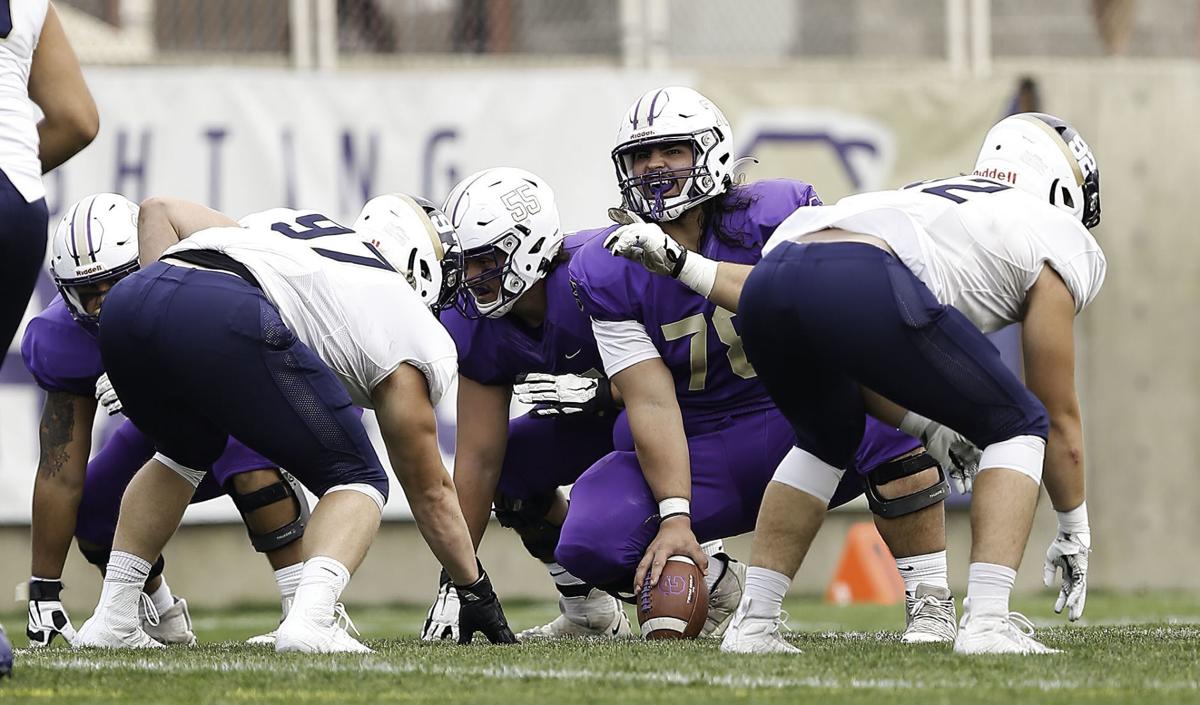 HELENA — All eight Frontier Conference football teams were back in action on Saturday after an open date. Like in the first two weeks of league games, this week’s slate featured a good balance of close contests, as well as convincing wins by College of Idaho and Montana Western.

This week also helped to build some separation into the conference standings. With a win over Carroll, Eastern Oregon moved to 3-0 on the season and became the final remaining undefeated team in the conference after Rocky Mountain College fell to Montana Tech. Western, College of Idaho and Rocky Mountain all currently sit at 2-1 after three league games, while Carroll, Tech and Southern Oregon are 1-2. Montana State Northern is the lone winless team at 0-3.

Spring in their step?

Programs that had not played since the fall of 2019 prior to this season won two games in three opportunities over teams that played in the spring of 2021 on Saturday. Western downed Northern 42-28 and Tech held off a Battlin’ Bears rally to win 31-29.

Saturday’s slate of games drops spring teams to 5-4 overall against teams that previously played in the fall of 2019 through four weeks of play. In the last two weeks, teams that played in the spring of 2021 are 1-3 against their counterparts.

Carroll’s contest with Southern Oregon is the lone game on Saturday in which the two factions of teams (fall of 2019 and spring of 2021) matchup.

At times this season, it seemed as if defense was optional in the Frontier. Already this year teams have given up at least 30 points nine times, with Northern having allowed 42 points in each of its first three contests.

In the early-going, however, three teams have seemingly separated themselves from the rest of the conference when it comes to defensive points allowed.

College of Idaho, Carroll and Eastern Oregon are all allowing less than 20 points per game after three league tilts. The Yotes gave up just three points and 205 yards of total offense to Southern Oregon on Saturday, while both the Mountaineers and Saints allowed no more than 10 points against each other.

Both College of Idaho and Carroll rank inside the top-25 nationally allowing 16.7 and 17.7 points per game, while Eastern Oregon checks in at No. 31 in the NAIA ranking giving up 19.7 points per contest.

As for the rest of the Frontier, Southern Oregon, Western and Tech are the next three teams in terms of defensive points allowed at 26, 28.3 and 28.7 per game.

Frontier Conference in the polls

As the last remaining unbeaten in the Frontier, and after a 10-7 win over Carroll, Eastern Oregon moved up two spots to No. 11 in the NAIA coaches’ top-25 poll released on Monday.

Western’s two-touchdown win over Northern meant the Bulldogs remained stationary in the poll at No. 23. College of Idaho was the second of three teams in the receiving votes category, while Rocky Mountain, ranked No. 24 last week, dropped from the poll following a loss to Tech.

*Leaf also earned NAIA National Player of the Week honors for his performance.

A battle between the top-two preseason favorites to win the Frontier, both teams will enter the weekend after wins on Saturday. College of Idaho looked better getting its victory, but Eastern Oregon is playing at home, and it feels like quarterback Kai Quinn is primed for a big game after the defense carried the Mountaineers to a win over Carroll.

Western is scoring better than 34 points per game through four contests, including 42 points in each of its last two victories. Jon Jund threw four more touchdowns (and three interceptions) against Northern on Saturday, but will guide an offense that ranks 24th in yards per game (434.8) into a matchup with Tech.

The Lights have given up 42 points in each of their three losses this season. Teams are racking up better than 450 yards of offense, on average, against Northern in the early-going. Rocky Mountain has a quarterback in Nate Dick who has thrown for 834 yards and eight touchdowns through three games, including a 350-yard effort in a loss to Tech on Saturday.

Both teams’ offenses were held out of the end zone in losses on Saturday. The Raiders seem to be a throw-first team and average better than 280 yards through the air per game. Quarterback Matt Struck is already over 700 yards passing in three contests, he has also tossed six touchdowns and turned the ball over just once through the air.

Carroll struggled offensively on Saturday against Eastern Oregon, and while the Saints are flying to Ashland, Oregon, they are still tasked with figuring things out on the road this weekend in a battle of 1-2 teams.

HELENA — It might be hard to believe, but the mid-way point of the regular season is right around the corner. Through four games and five week…