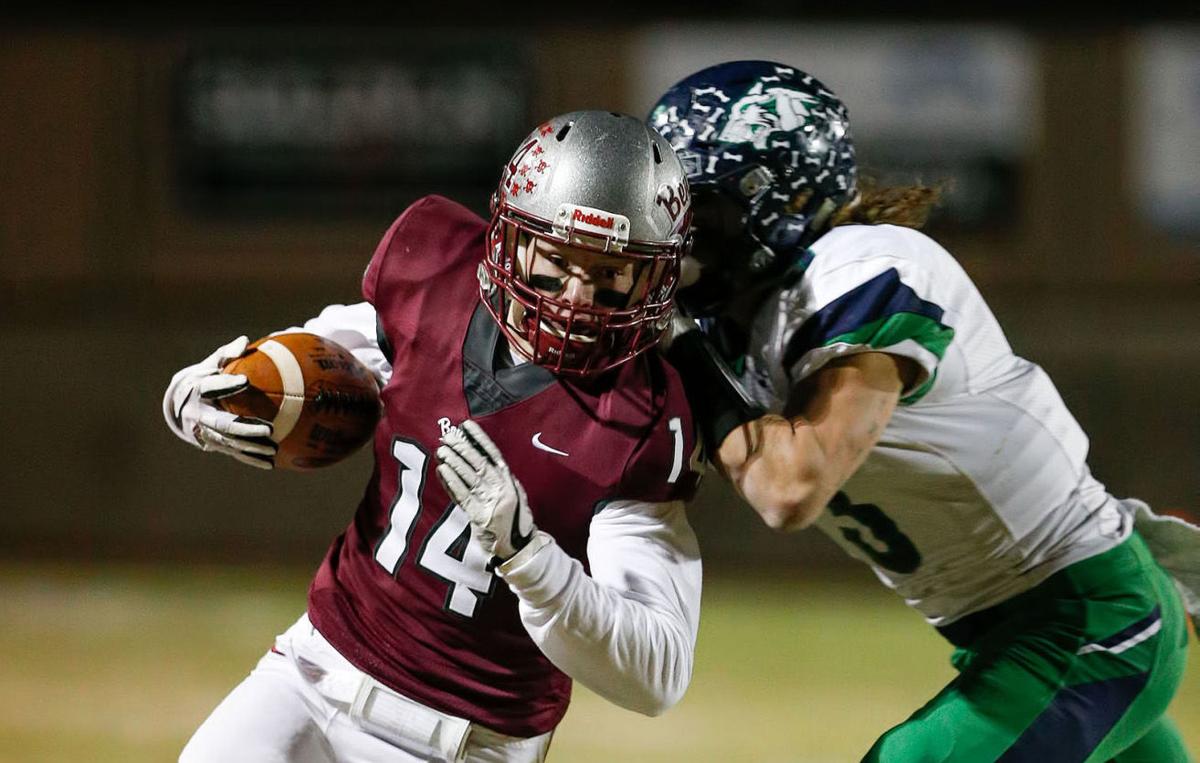 Helena High’s Zachary Spiroff is forced out of bounds by Glacier’s Dew Deck during a football game at Vigilante Stadium in November 2018. 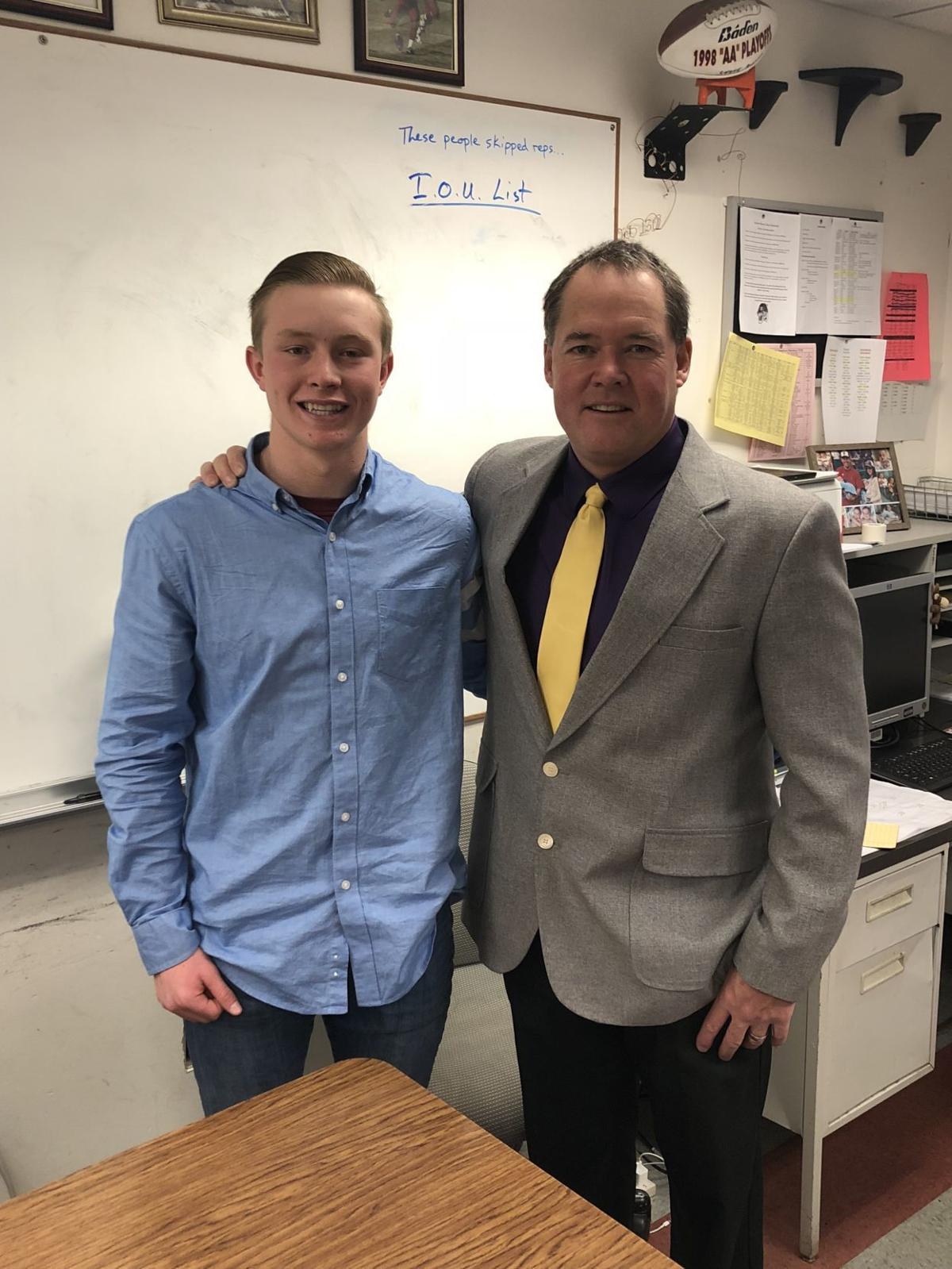 Helena High’s Zachary Spiroff is forced out of bounds by Glacier’s Dew Deck during a football game at Vigilante Stadium in November 2018.

HELENA — Zachary Spiroff is the type of player to take advantage of opportunities in football since the time he was called up to the varsity level his junior year at Helena High.

Spiroff, who was the Bengals full-time cornerback and played multiple wide receiver positions in his four years at Helena, announced on Twitter Wednesday morning his decision to continue his football career at Carroll College.

The decision to sign with Carroll came eight days after the Saints announced Troy Purcell as it's a new football coach to take over for long-standing coach Mike Van Diest.

Spiroff talked to several football players at Carroll to learn how they felt about the coaching change. After he heard more about Purcell from players and his high school coaching staff, he felt more comfortable about his decision.

Before signing with the Saints, Spiroff admitted to teetering between Montana Tech and Carroll.

"As soon as coach Purcell took the job, I was interested because I knew he was a top quality coach, and all of my high school coaches said great things about him," Spiroff said. "I am excited to get the opportunity to play under him. Honestly, Carroll was just kind of a fit for me. I was back-and-forth (with my decision), but after Purcell came aboard, I wanted to be part of that excitement."

Spiroff, who generated some light interest from Montana, ultimately decided the NAIA level would give him more opportunities.

"I talked to some of the current players at Carroll, and I wanted to get their take and make sure Purcell was going to be a fit for me as a player," Spiroff said. "I just heard more and more outstanding remarks, and everyone was so positive about what he is doing."

According to Helena football coach Scott Evans, Spiroff generated interest from several regional and out-of-state colleges. Evans said he felt Spiroff's decision to sign with Carroll is based on proximity.

"By his junior season, colleges started asking about him," Evans said. "He had interest from multiple colleges. He would go visit different places, but I think he chose Carroll because of its proximity to home. He wanted to stay close to home, and they offered the degree field he wanted."

I am incredibly blessed and thrilled to announce that I will be continuing my educational and football career at Carroll College! I can’t thank the people enough who have helped me to get this opportunity in my life. Thank you! #gosaints ⚜️

"I considered Montana Tech because they have a solid football program," Spiroff said. "The big thing was for me, my parents, and my family is that I enjoy being around them. They are the biggest thing in my life, and I wanted to be as close as possible to them."

Spiroff, who has been around football from a young age, developed a natural intuition for the game, Evans said.

"Zach grew up around football," Evans said. "He's been around football and worked harder and harder than you can imagine getting better at the game. When we called him up to varsity in his junior year, he took full advantage and was always in the gym all of the time trying to develop in all aspects."

Evans, who has known Spiroff for six years and coached him for four, expressed optimism in Spiroff's ability to move forward in his transition from Class AA high school football to the NAIA level.

"Zachary picked up the nuances of the game," Evans said. "He just got better year in and year out, and it was a great progression to understand where he had to progress too."

Spiroff quickly began carving a reputation in football as a multi-dimensional athlete.

With the Bengals, Spiroff played multiple formations as a wide receiver. He attributes playing both sides of the football to enhancing his success as a defensive back.

"It's effective to know what the other side of the field is trying to throw at you," Spiroff said. "That has been crucial to succeeding as a defensive back."

His work ethic and determination allowed him to earn an opportunity to play college ball in spite of being undersized.

"The thing I attribute most is my hard work to getting to this point to succeed," Spiroff said. "If I stopped and gave credit to all of my coaches (for helping me get this far), I could go on forever because they instilled in me that hard work is the key to success. They all played with a major contribution to what I've done throughout my high school career, and now starting through my college career."

Evans speculated that Carroll would recruit him primarily as a defensive back and punt returner, which is where he excelled at with the Bengals.

"Every player has to decide that it is the best option for them," Evans said. "It came down to a couple of colleges, and Zachary made a wise choice for him and his family as well."

Spiroff also believes he will play in the positions where he excelled at Helena, but is open to playing new positions with the Saints.

"My goal is to bring back the winning ways of Carroll," Spiroff said. "Growing up, you hear about their accolades as a football program. They were pretty impressive, including six national championships and countless wins. I want to help them get back to that point where they are competing for a national championship."

Spiroff, who has been around football from a young age, developed a natural intuition for the game, Evans said.

"Zach grew up around football," Evans said. "He's been around football and worked harder and harder than you can imagine getting better at the game. When we called him up to varsity in his junior year, he took full advantage and was always in the gym all of the time trying to develop in all aspects."