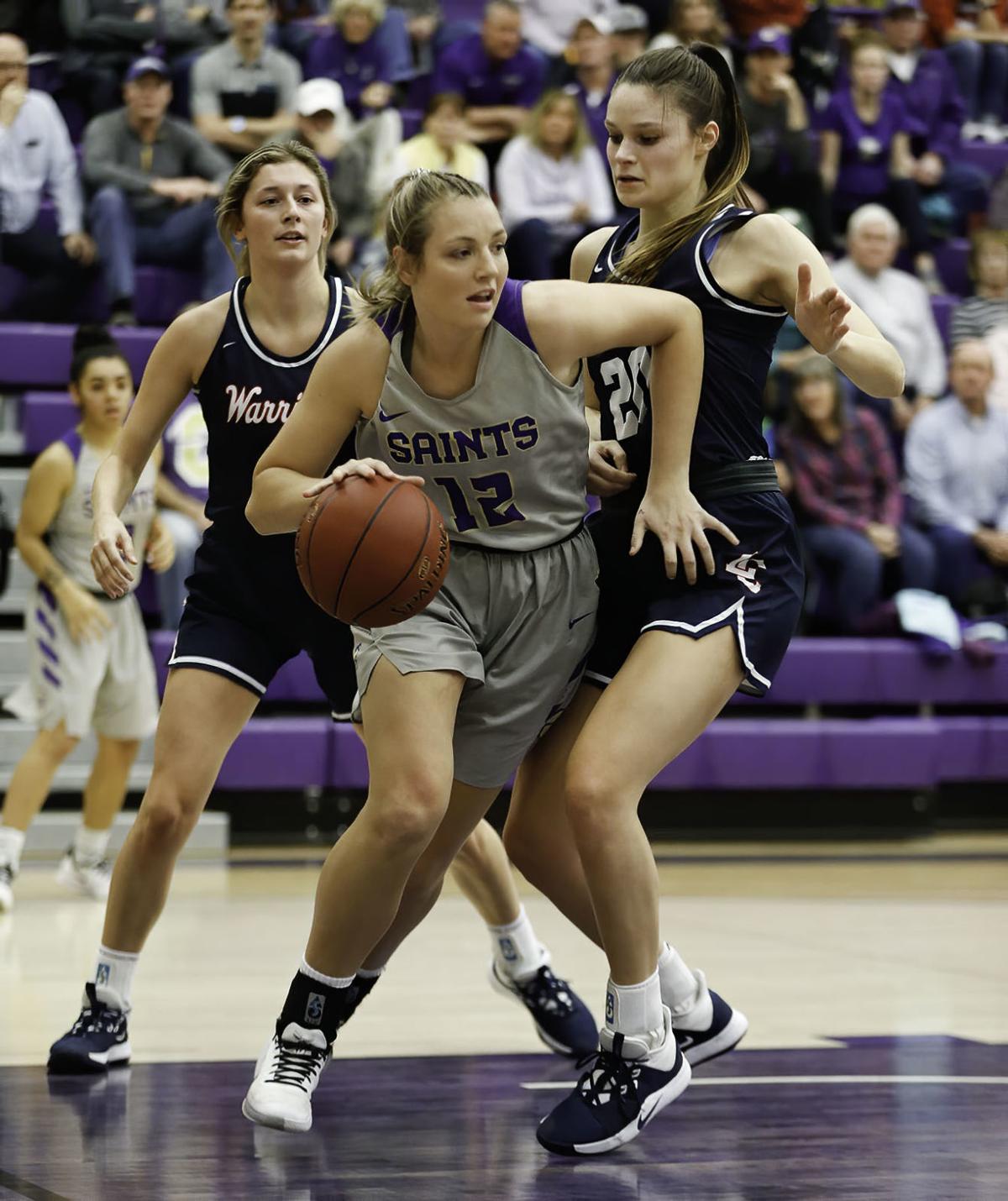 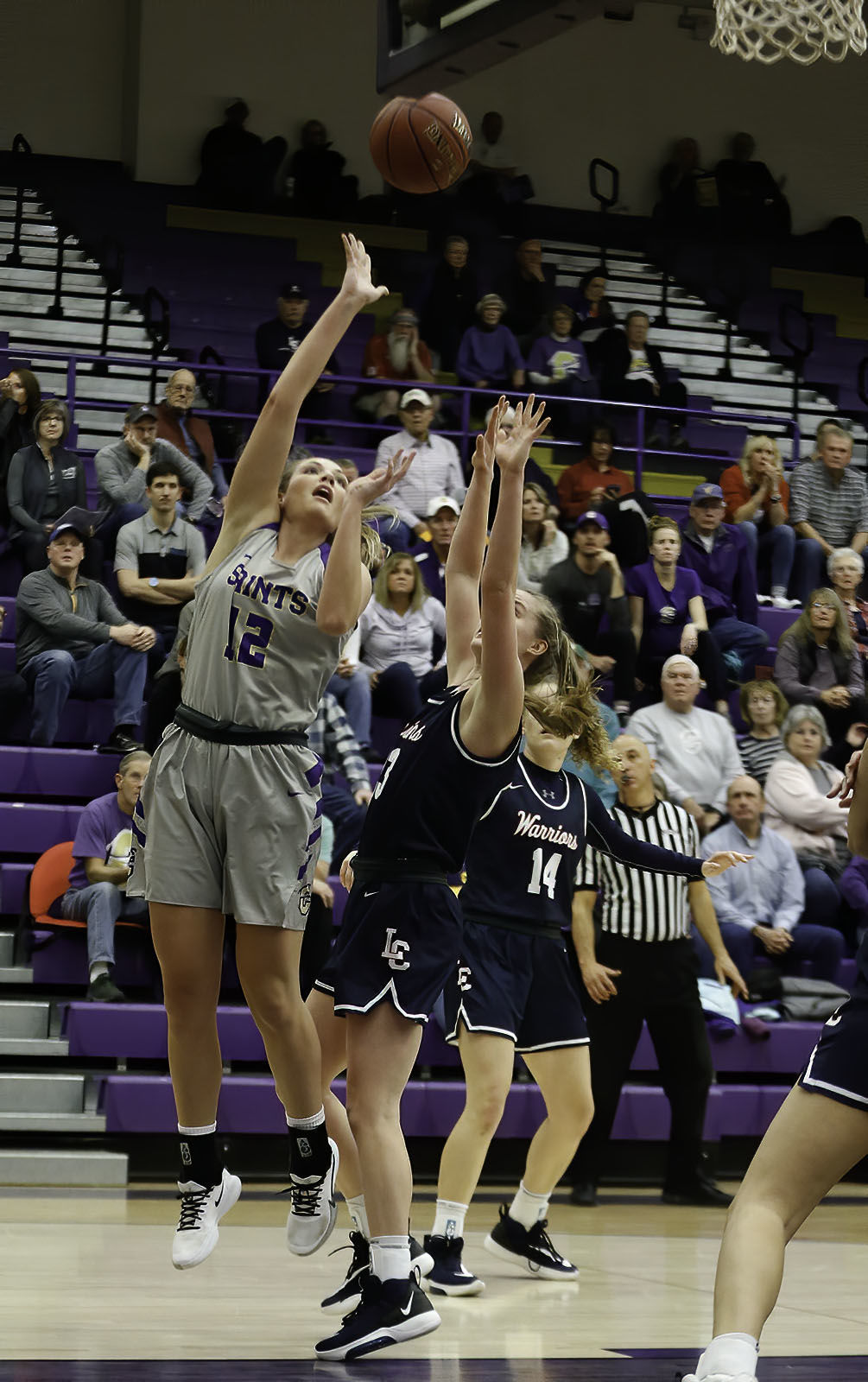 It also hasn’t seen as many tall teams.

Ultimately, the combination of a tall team playing a zone defense ended up being too much as the Saints lost to Lewis-Clark State 69-61 at the PE Center on Friday night.

"We let (Lewis-Clark State) control the tempo all night and their length bothered us," Sayers said.

Lewis-Clark State started the game in a 2-3 zone defense.

It was meant to take away Carroll’s inside game.

But the Saints didn’t waste anytime going right at the Warriors zone defense .

Sophomore point guard Kamden Hilborn banked in a 3-pointer followed by a shot in the paint by Christine Denny.

Hilborn added another 3-pointer from the top of the key and the Saints held a 10-3 lead midway through the first quarter.

That was until the Saints bench came in to give the starters a break and Lewis-Clark State took advantage.

The Warriors are one of the Frontier Conference biggest teams, with players such as 6-foot Kiara Burlage and 6-2 Abbie Johnson who muscled their way inside.

Lewis-Clark State finished their 10-0 run with a shot by Hannah Burland inside and had momentum for the rest of the quarter.

“We definitely let their zone get to us today," Salonen said.

Carroll started to get its offense going in the second quarter once the starters came back in.

Denny hit a shot to shrink the deficit down to two points, and the Saints finally broke through when Maddie Geritz converted a three-point play.

But the biggest factor that can stop momentum is turnovers.

Sayers expressed how proud she was of her team back on Tuesday when the Saints committed just five turnovers to Montana Tech’s 18.

At the end of the first half, Jaidyn Lyman lost the ball, followed by a turnover by Sienna Swannack. Taylor Salonen and Denny also added to the turnover total, and after the first 20 minutes, Carroll committed a total of 12 turnovers.

During the second half, Lewis-Clark State continued its hot shooting.

It had already made 54 percent of its shots in the first half and, in the second half, continued where it left off.

Burlage hit a bucket followed by Johnson hitting a 3-pointer from the top of the key.

Lewis-Clark State extended its lead to as many as 15 points with just under three minutes left in the third quarter, but the Saints stuck around.

Salonen hasn’t scored that much during her senior season, but she found her touch against the Warriors’ zone.

She hit a jump shot just in front of the 3-point line and a 3-pointer in the corner.

Carroll cut the deficit down to as few as seven points, but Lewis-Clark State started to pull away.

When time began to become a factor late in the fourth quarter, the Saints started to extend the game by fouling.

Hilborn and her teammates got within six points, but it was too much of a deficit to overcome.

Hilborn did finish with a career high 15 points that included five 3-pointers.

“It comes down to discipline,” Salonen said. “We have to be more disciplined and communicate better.”

Carroll moves away from league play until January.

For the rest of December the team will travel to Glendale, Arizona, for three games in the Phoenix Frontier Classic.

Salonen said it might just be the thing that her team needs.

“It’ll be a good week to give our legs a break and doing things we know we can do,” Salonen said. “We just have to go to Arizona and get some wins.”