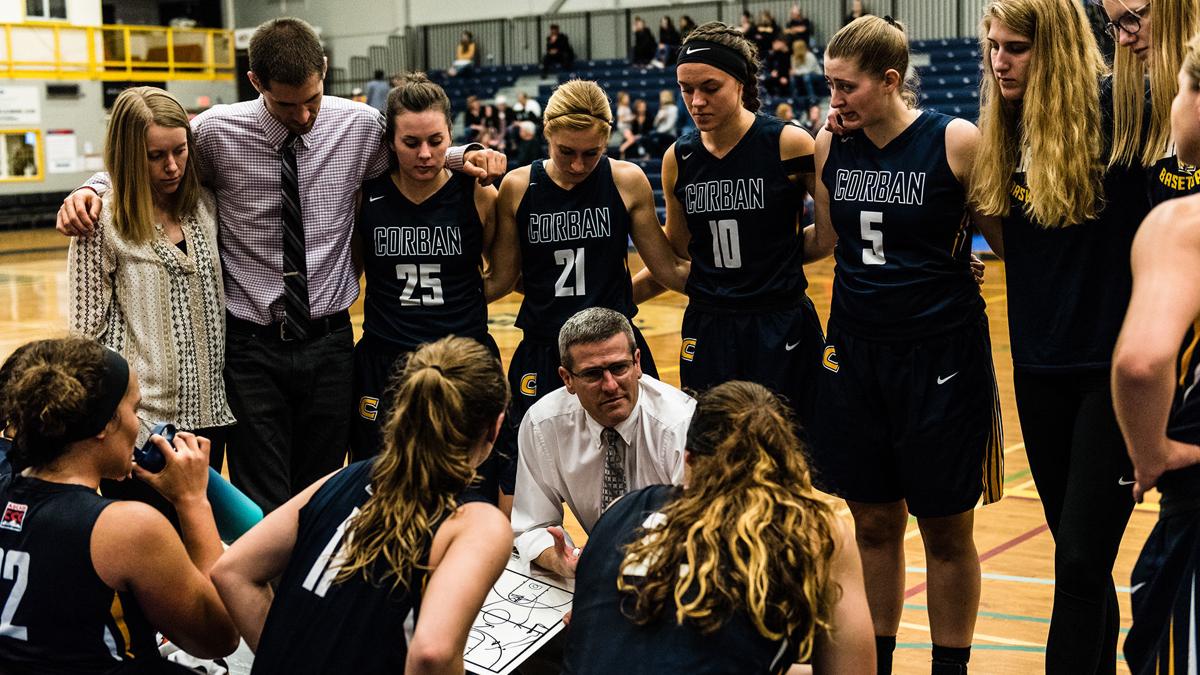 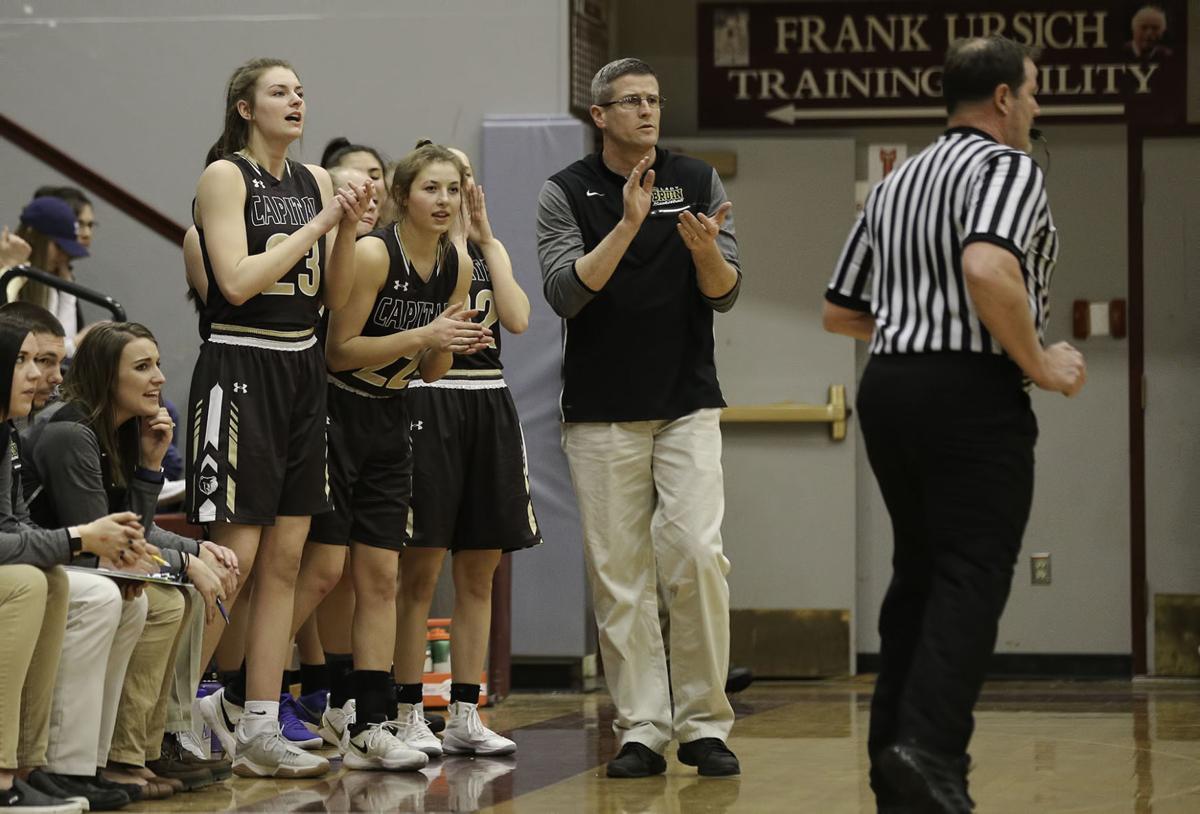 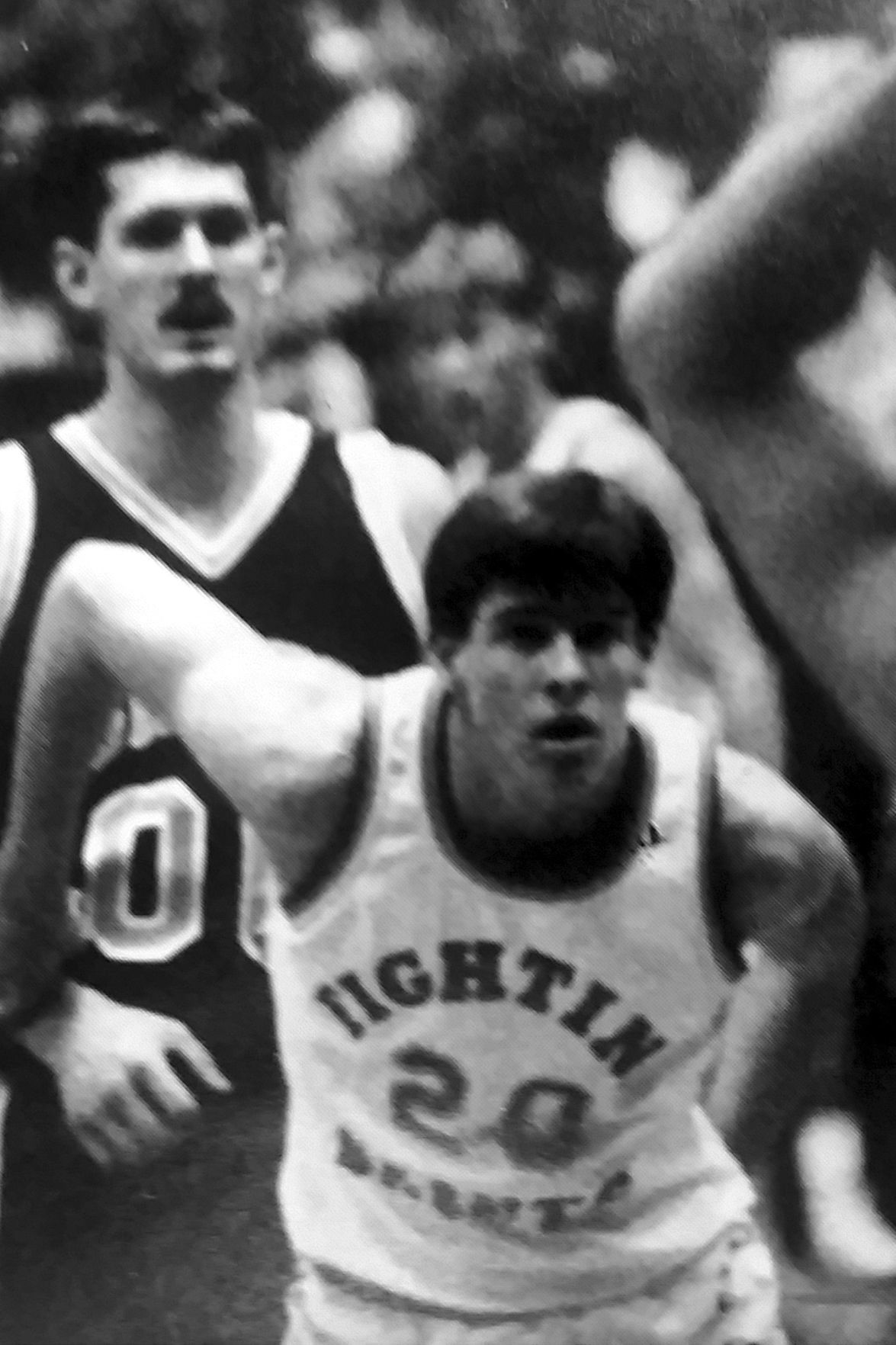 Carroll College guard Bill Pilgeram scored a career-high 2,515 points which is most in school history. 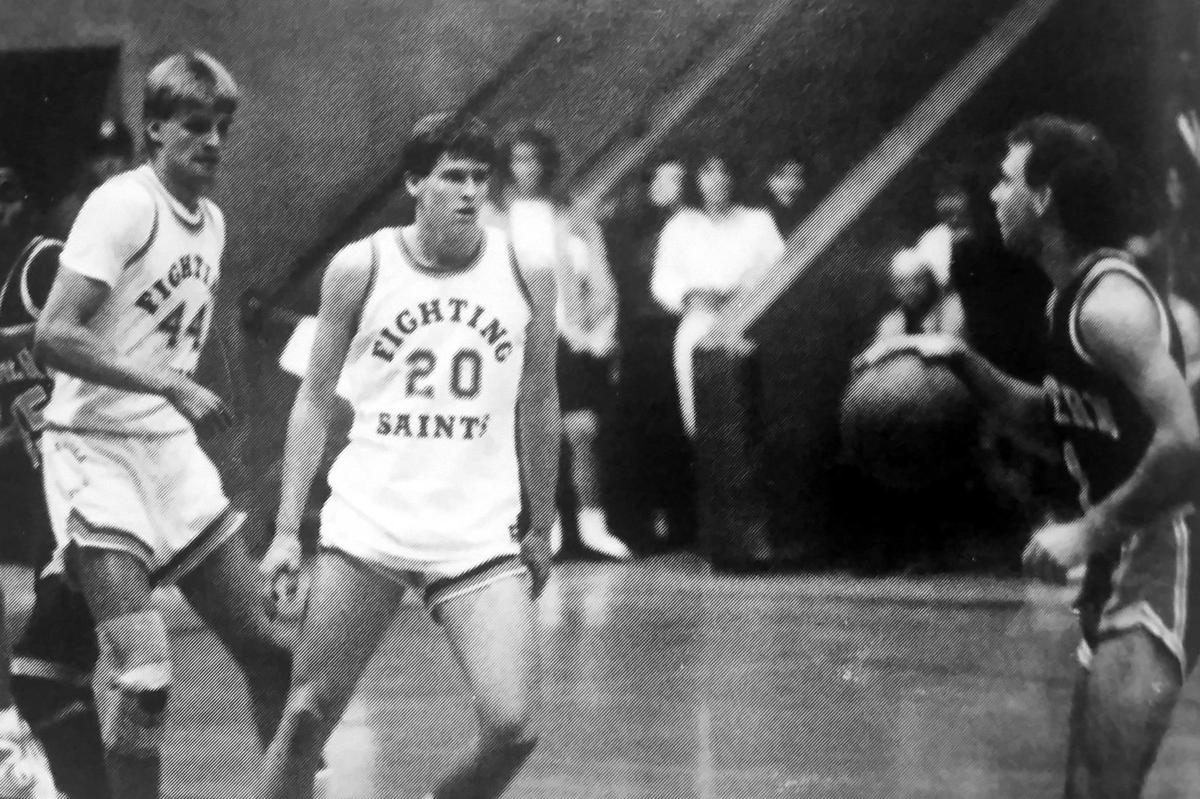 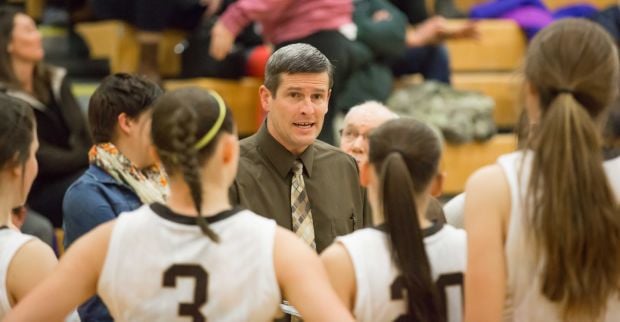 Capital High coach Bill Pilgeram discusses strategy with his team before the beginning of the third quarter of the season opener against Butte. 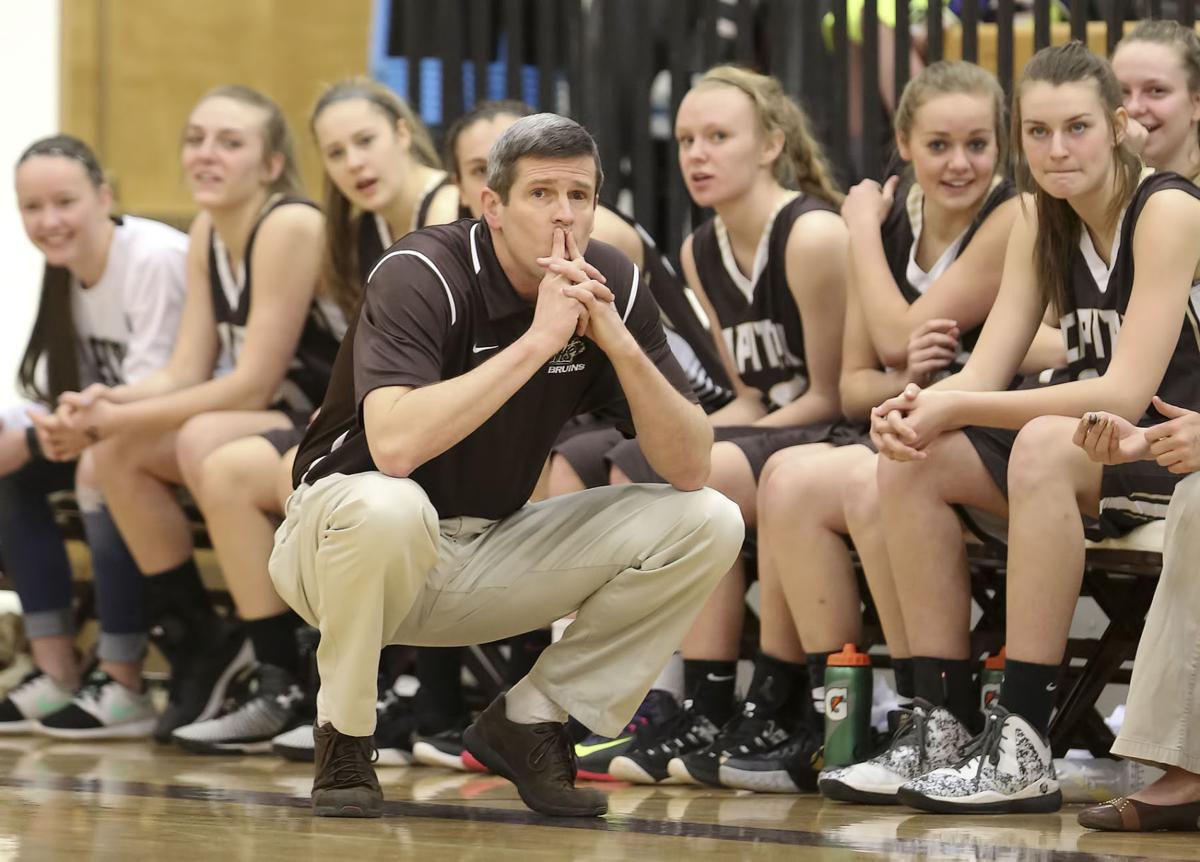 Capital coach Bill Pilgeram watches as his Bruins take a 20-point lead in the third quarter of Saturday’s game against Glacier.

Carroll College guard Bill Pilgeram scored a career-high 2,515 points which is most in school history.

Capital High coach Bill Pilgeram discusses strategy with his team before the beginning of the third quarter of the season opener against Butte.

Capital coach Bill Pilgeram watches as his Bruins take a 20-point lead in the third quarter of Saturday’s game against Glacier.

HELENA — Bill Pilgeram could be the best men’s basketball player that has come through Carroll College.

Over a four-year career, he scored 855 field goals, culminating in a record 2,515 points for the school.

Not to mention, he holds three Frontier Conference Player of the Year awards, made 57 percent of his shots and shot 91 percent from the free throw line.

But if you remind him of all of those accomplishments, his response might not be what you’d expect.

“Honestly, it takes me a little bit by surprise,” Pilgeram said. “I didn’t view myself as a supreme athlete. I wasn’t focusing on how many points I could score. I just did the best I could do.”

Whether he was taking jump shots in the PE Center or, later in his career, coaching women’s basketball, his mindset has remained the same.

“I was just very good at the mental part of the game and was very consistent in everything I do,” Pilgeram said.

Who knew those beliefs would make such an impact on the Helena basketball community?

Growing up in Plains

Pilgeram fell in love with the game of basketball at a very young age while growing up in Plains.

“Basketball was just the game for me,” Pilgeram said. “I enjoyed it the most, I felt like I had the most success with it and I just love the flow from offense to defense.”

By the time he entered Plains High School, his skill turned him into a scorer and his team was well on its way to success.

“Everybody (in Plains) did sports, but Plains was a big basketball town,” Pilgeram said. “We had a group with just a lot of athletes. We had one of those runs where basketball became the No. 1 thing.”

By the end of his high school playing career, he had helped guide the undefeated Horsemen to a Class B State Championship during his senior season.

He averaged 28.3 points per game and was named the State Tournament MVP.

“We were probably more talented my junior year but we didn’t do well at state (that year),” Pilgeram said. “Everything just sort of fell into place.”

By his senior year, basketball made a change that took his game to the next level.

The NBA was the first to adopt the 3-point line in 1979. Shortly thereafter, the NCAA implemented the same rule. It wasn’t until 1987 that high school courts were being repainted to add the arc.

“I remember reading the newspaper that the 3-point line was going in so, that day, I went out to my court and painted the 3-point arc on the farm,” Pilgeram said. “Three is always better than two.”

Pilgeram already knew how to make a jump shot from that range, but it didn’t take long for him to figure out how to make more of an impact.

“It just made (my game) more dangerous,” he said. “They had to come out and guard me.”

Pilgeram knew he wanted to play college basketball but decided to take a risk with the college he chose.

Sure, Carroll was looking at him, and he was close to signing, but he chose instead to walk on at the University of Gonzaga.

“I decided I had to chase the dream a little bit,” Pilgeram said.

He redshirted, never seeing any time in a game, but gained experience from his teammates and other players around him.

One particularly influential player for him was Utah Jazz point guard John Stockton.

Stockton graduated from Gonzaga in 1984, but would come back and play with the players before his fall camp.

“I have always looked up to him, and I have never met a more competitive and genuine guy than he was,” Pilgeram said.

After one season, he made the choice to come back to Montana and, right away, he knew Carroll was the right fit.

But did he know he would break records?

It didn’t take long for Pilgeram to make an impact for the Saints.

He started immediately. By the end of his sophomore year, he was the Frontier Conference’s Player of the Year, averaging 28.7 points, 4.8 rebounds and five assists per game.

“I came a long way physically, mentally and emotionally, but I felt like I was facing competition at a higher level,” Pilgeram said. “I just gained more and more confidence and was able to develop more abilities on the offensive end.”

By his senior season, he had led another team to a championship, this time a Frontier Conference title under first-year coach Gary Turcott.

“That was my proudest moment, because we were close the years before and always had the potential to be Frontier champions,” Pilgeram said. “It was just so satisfying.”

Pilgeram’s fire to become a coach first began to smolder when he was a player at Carroll helping out during summer camps.

After graduating, he pursued a coaching career. He was recruited by his old high school coach to help out as an assistant for the boys basketball team in Colville, Washington.

One year later, he was promoted to head coach.

“It really helped springboard me forward but it didn’t stop me from trying to grow each year,” Pilgeram said.

He spent five years in Colville before he got a call from Turcott with an opportunity to come back to Helena.

“He was the first one to let me know the Helena Capital job was open,” Pilgeram said. “I was always interested in coming back, so I thought it was a perfect fit.”

His resume as a girls coach included 11 state tournament appearances, two runner-up finishes in 2007 and 2013 and a state championship in 2015.

But aside from a successful run on the court where he finished with a 12-year record of 184-89, winning 64.7 percent of his games, he taught his players consistency.

“It’s about making the plays you know you can make and being confident in your game,” Pilgeram said. “It really helped me as a player so I really try to instill in the players that I coach.”

Current Capital girls coach Katie Garcin-Forba, who was an assistant under Pilgeram for eight years, said the biggest thing she learned from him was to develop relationships with players.

“I couldn’t have asked for a better mentor,” Garcin-Forba said. “They need to know you care about them before everything else. Being able to see things from his prospective was a huge takeaway.”

Capital finished the 2017-18 season with a 20-6 record and a second round loss, but no one expected what would follow.

Pilgeram became eligible to retire from teaching, so he sat down with his wife and discussed their future.

He wanted to try coaching college, but only at a few schools.

“It was a very short list,” Pilgeram said. “Carroll was on that list, Corban University (in Salem, Oregon) was on that list because of my daughter playing there. These were small Christian schools that just do things the right way.”

He applied to Corban and was named head coach in May 2018.

But it was hard leaving a town that was like a second home to him.

“I love the kids I coached at Capital,” Pilgeram said. “Whenever you spend 20 years coaching one team in one community, you create a lot of strong ties. There is going to be a little bit of pain, but it was one of my goals to coach college. I will always be a Bruin.”

Garcin-Forba also had mixed emotions that he was leaving.

He was a good friend to her and, more importantly, a mentor on the bench.

“I was so excited for him and his family but I was also disappointed, because our coaching together was coming to an end,” she said. “It was just an end of an era, and I knew something new in my coaching career was coming about.”

Adapting to the college game

When Pilgeram stepped onto Corban’s campus, he quickly had to adapt to the college game.

“It is definitely different,” Pilgeram said. “There has been a learning curve, but also an opportunity to grow as a coach.”

One difference was recruiting players to play for him.

“In high school, you just take the team you have and your goal is to make them the best you can,” Pilgeram said. “In college, your team two years from now is your responsibility and you have to find players that fit. It’s an exciting challenge, but also stressful.”

During Pilgeram’s first two seasons, the Warriors have averaged 21.5 wins and made the second round of the NAIA Division II National Tournament in 2019.

He has no thoughts of leaving, and is now immersed in a combative Cascade Collegiate Conference. He still preaches consistency and maintains a program that competes at the highest level.

Pilgeram didn’t waste time returning to compete against his alma mater as a college coach.

His Warriors lost to Carroll in a non-conference game 57-48, and he admitted it was a little strange coaching against his alma mater.

“I’m a Saint, and I’ll always be a Saint,” Pilgeram said. “But that pride and that competitor comes out in me and I want to do well against them.”

He got some retaliation this past year where he returned the favor with a 65-56 win in Oregon.

The rubber match was supposed to be scheduled this upcoming season in Helena, but both schools had to cut scheduling due to coronavirus pandemic concerns.

I would definitely anticipate getting with (Carroll coach) Rachelle Sayers and continuing these games against each other,” Pilgeram said. “We fully plan on doing that as soon as we can make it work.”

Pilgeram might not remember every single one of his 855 career field goals. He will probably stay humble when people remind him of being Carroll’s all-time scorer.

But whatever basketball court he stands on, whether it be in the PE Center, Capital’s gymnasium or now at Corban, he will share his love for the game of basketball with his players.

And he will do that by preaching the importance of one thing.

“I remember reading the newspaper that the 3-point line was going in so, that day, I went out to my court and painted the 3-point arc on the farm,” Pilgeram said. “Three is always better than two.”

People always talk about Carroll College football's six national championships but there were other teams that laid the foundation.