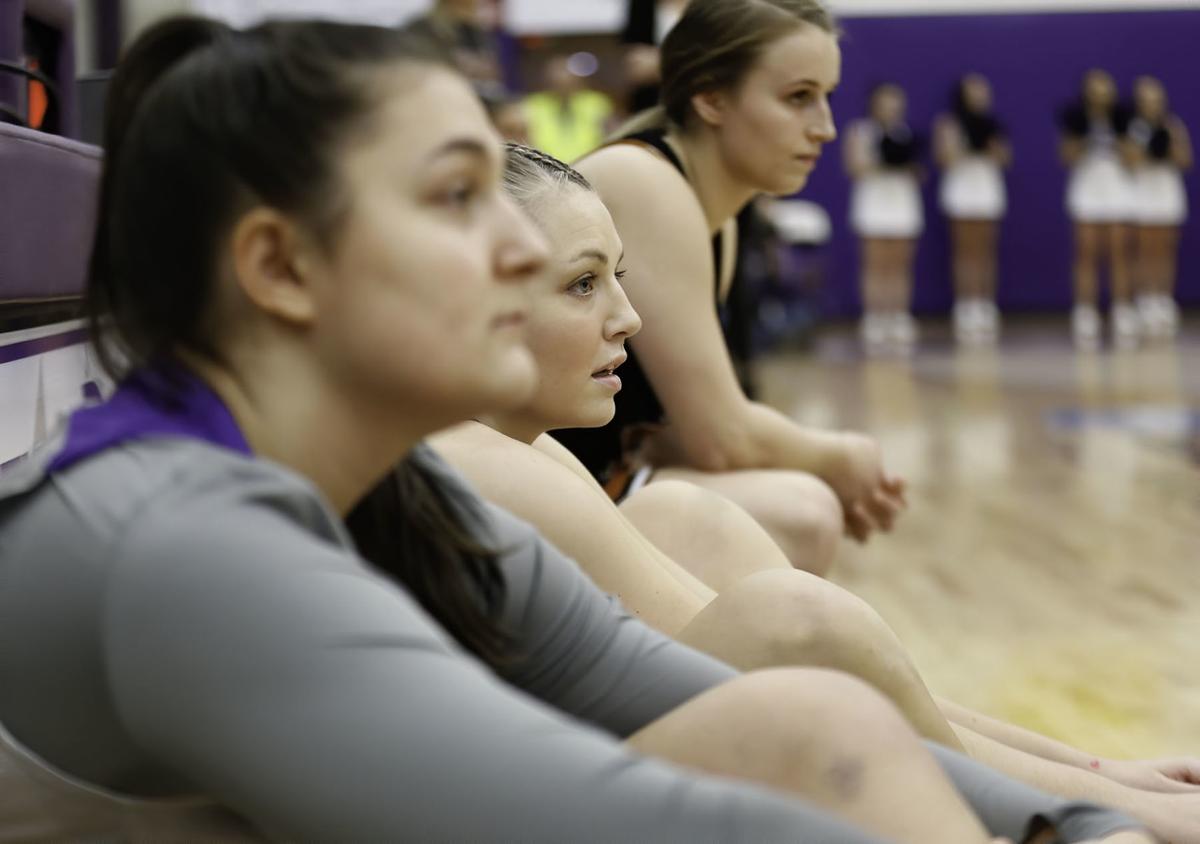 Carroll College senior forward Taylor Salonen, middle, sits at the scorers table waiting to go into the game last Wednesday against Montana Tech. Salonen has started just two games this season but has been a key contributor to the women's basketball team this season. 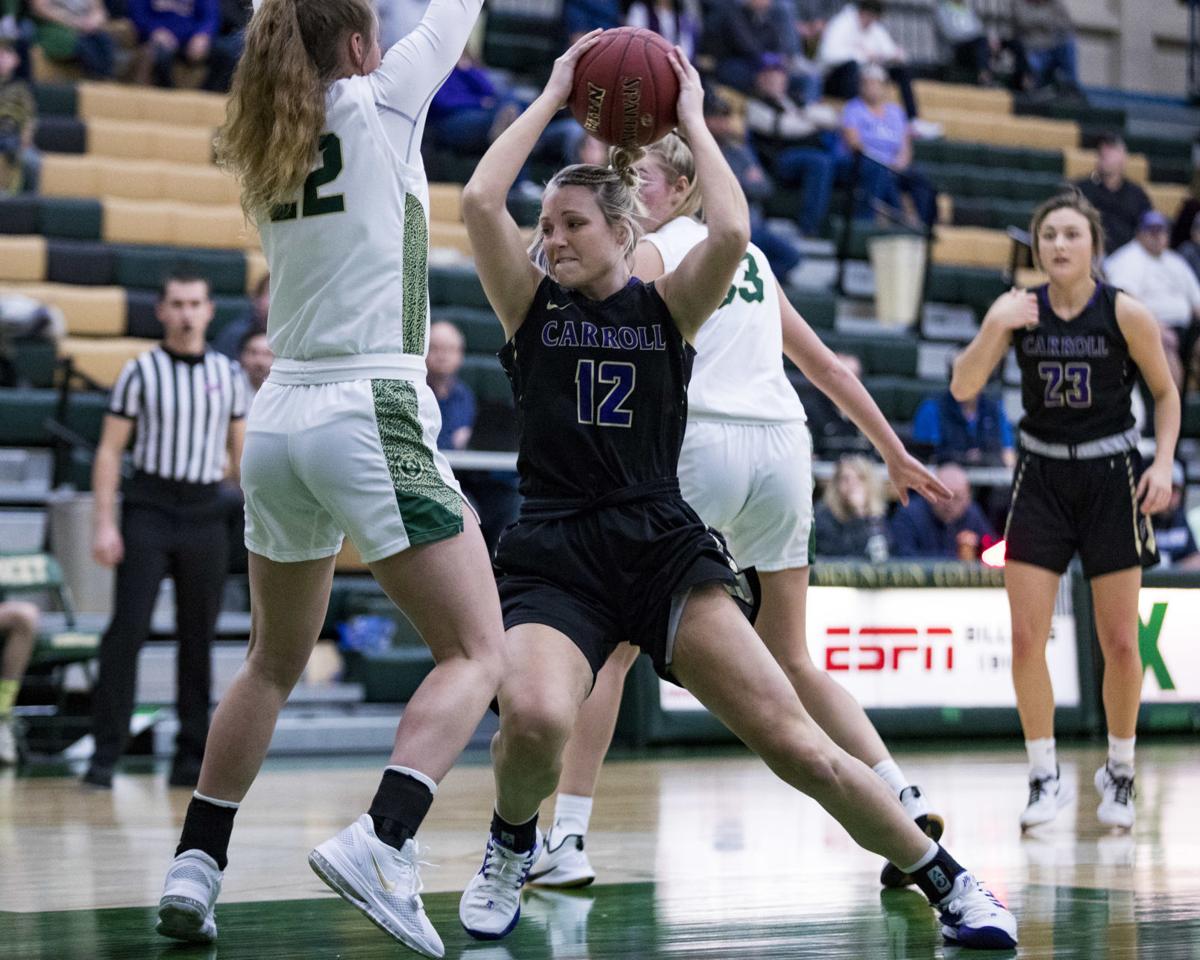 Carroll College senior forward Taylor Salonen, middle, sits at the scorers table waiting to go into the game last Wednesday against Montana Tech. Salonen has started just two games this season but has been a key contributor to the women's basketball team this season.

She watches the pomp and circumstance of the the Saints starting lineup getting introduced, but that doesn’t bother her.

Salonen knows it’s her time to shine when coach Rachelle Sayers points at her to get in the game.

“I’ve had that mentality the last four years,” Salonen said.

Salonen has started just two games this season but has more experience playing college basketball than the rest of her teammates.

She leads the team, having played in 112 games and has shot a consistent 42 percent from the field and 40 percent from behind the 3-point arc.

Over her career, she has occasionally put up the big numbers, such as a 13-point, 14-rebound performance against the University of Lethbridge in 2017, and has also been recognized as the Frontier Conference Sixth Person of the Year, but she is perfectly fine putting up 3.9 points and grabbing 3.3 rebounds over her career.

This season, her 4.6 points per game might not be gaudy, but that’s not what Sayers is looking for.

“She is one of those players, whether it is injury or what have you, who has been a great backup because we have had to play her at (power forward) and (center),” Sayers said.

After a season-ending injury to Cassidy Kosena early last year, Sayers moved junior Christine Denny to power forward position and Hannah Dean to center. Salonen was stuck coming off the bench, but because she is able to play multiple positions in the post, she became a useful asset.

“She was the first one off the bench for whoever needed the breather first,” Sayers said. “When you have somebody who can play two positions like that and you start them at one, you end up having two positions tired at the same time.”

And whether Salonen is in the game for five minutes or 20 minutes, she doesn’t complain.

“She is a leader for us,” Sayers said. “She probably doesn’t get the praise she deserves for everything she does, but she does a ton for us.”

Salonen has only put up 11 points as her season-high, against Lewis-Clark State back on Dec. 6, but that doesn’t mean she isn’t capable of putting up big shots.

She hit two clutch free throws to defeat Rocky Mountain back on Jan. 15 in Billings and, more recently, showed off her range to Lewis-Clark State when she sunk two 3-pointers late in the game last Saturday in Lewiston, Idaho.

“She is such a smart player, and her perimeter skills are very guard-like,” Sayers said. “I trust her. I was proud of her taking those two big shots when we really needed it.”

That also includes trusting her on defense.

Salonen has seen plenty of minutes in late-game situations and could have the daunting task of guarding Rocky Mountain senior forward Markaela Francis.

Over the last four games, Francis has averaged 15.7 points per game to go along with 9.5 rebounds.

“There is so much emphasis to get her the ball. You can’t relax,” Sayers said. “She has also become a great passer because she has learned to read the double teams. It makes her tough to guard.”

But, as on offense, Sayers trusts her senior even though she doesn’t start the game.

“You want to be in at the end of the game,” Sayers said. “Obviously, starting is fun with all the hoopla of it all, but it’s about who is in the game at crunch time, and that is Taylor.”