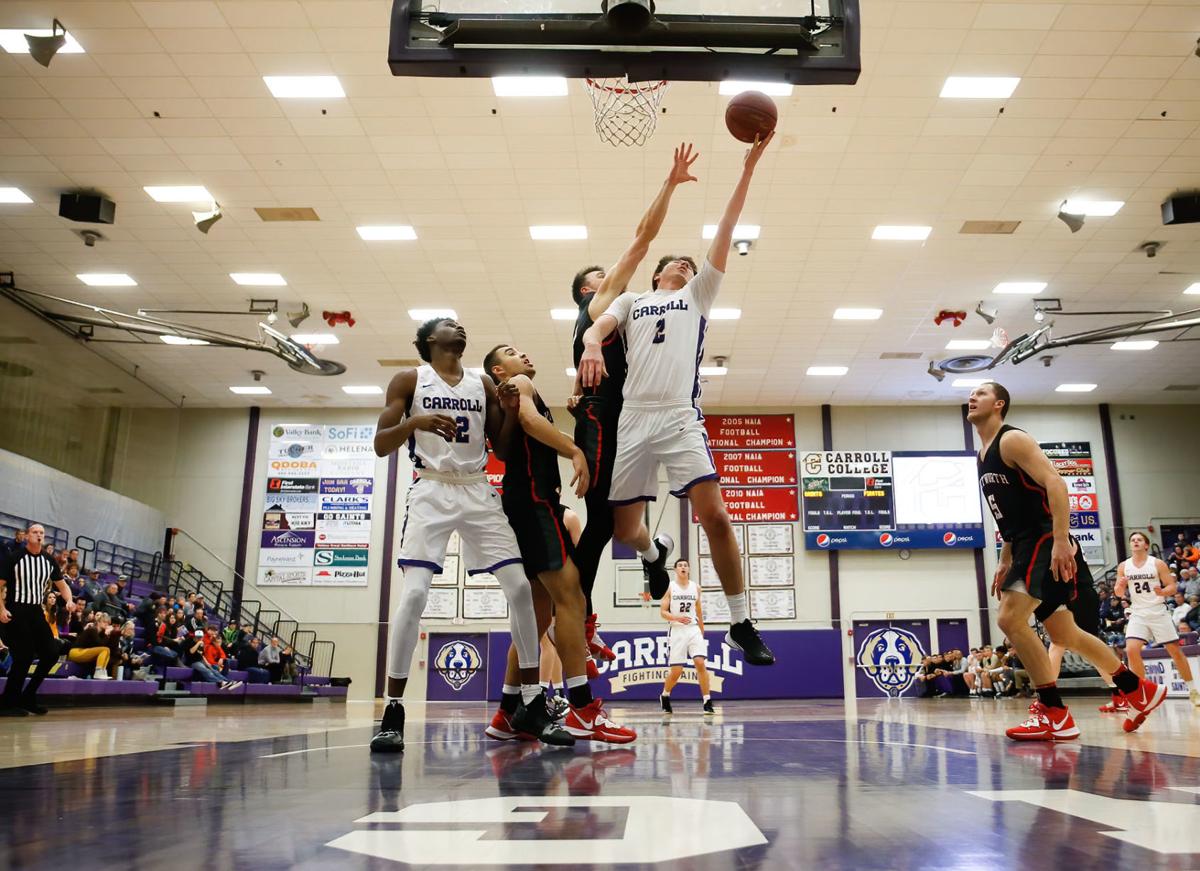 Carroll College senior guard Dane Warp scores a bucket earlier in the season for the Saints, who rolled to a 111-33 win Thursday night against Concordia-Edmonton. 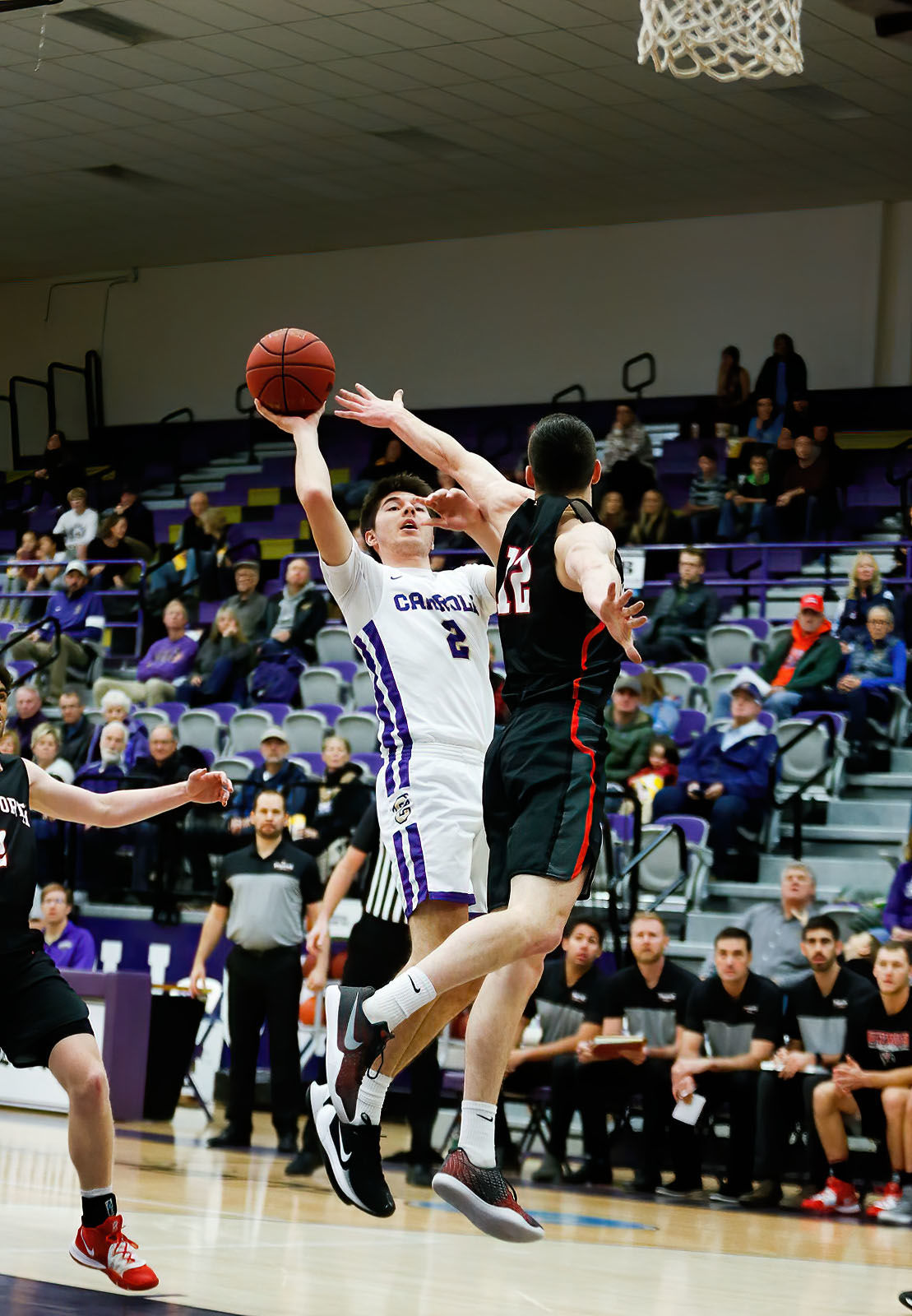 Carroll’s Dane Warp goes up for a shot over Whitworth’s Same Lees during Saturday’s game at Carroll College.

Carroll College senior guard Dane Warp scores a bucket earlier in the season for the Saints, who rolled to a 111-33 win Thursday night against Concordia-Edmonton.

Carroll’s Dane Warp goes up for a shot over Whitworth’s Same Lees during Saturday’s game at Carroll College.

He went to high school 12 miles south of its campus in Spokane, Washington, and was even recruited by the Pirates.

And he reminded them how efficient he could score the basketball.

Campbell finished with a career-high 23 points that included four 3-pointers as the Saints took down Whitworth 79-61 Saturday afternoon at the PE Center.

“I’ve struggled with the three a little bit over the last few games,” Campbell said. “I just came in confident and let it fly.”

Campbell hadn’t made a 3-pointer in a game since Nov. 2, when Carroll defeated Eastern Oregon.

Over the last three games, he had missed all seven attempts.

That changed in the first two minutes when he nailed a shot from the top of the key.

He hit another with five minutes left until halftime.

He had eight points, but his team was only ahead by a possession.

Carroll (4-2) returned to Montana on Tuesday after a tough California trip that saw two losses to Hope International and Westmont.

Coach Kurt Paulson wanted his team to be tested. He knew Frontier Conference play was right around the corner.

“We have had a tough schedule so far, but that’s what we wanted,” Paulson said.

He watched his team increase the lead to 28-21 with just under four minutes remaining in the first half.

But the Pirates were not left behind.

Campbell finally stopped the run with a bucket in the paint as the Saints held 30-29 halftime advantage.

Paulson has preached all season the importance of being aggressive and attacking the rim.

Entering Saturday’s game, the Saints had only made 37 percent of their shots from the outside.

And in the second half, his players responded.

Campbell’s offense was hidden behind players such as Matt Wyman and Match Burnham last season, but there was no one to overshadow Campbell against Whitworth.

“When the ball got rotated around, he benefited when it came back to him,” Paulson said. “It starts with ball movement.”

The Saints increased their lead up to as many as 15 points with six minutes left in the game and there was no slowing down.

The Pirates even had the opportunity to put together a five-point play after Campbell was called on an off-ball flagrant foul for hooking and holding while Whitworth made a 3-pointer, but the rally was squashed.

Campbell might have shone against his hometown team, but he also had some help. Senior Dane Warp also scored 23 points, while Sljivancanin scored his second consecutive double-double with 14 points and 10 rebounds.

“We have been settling for outside shots up to this point,” Paulson said. “We needed to get those free throws and points in the paint.”

Tech is coming off an exhibition loss to BYU but stunned Montana earlier this season.

FULLERTON, Calif. — The Carroll College men’s basketball team knew it was a young squad heading into this season.