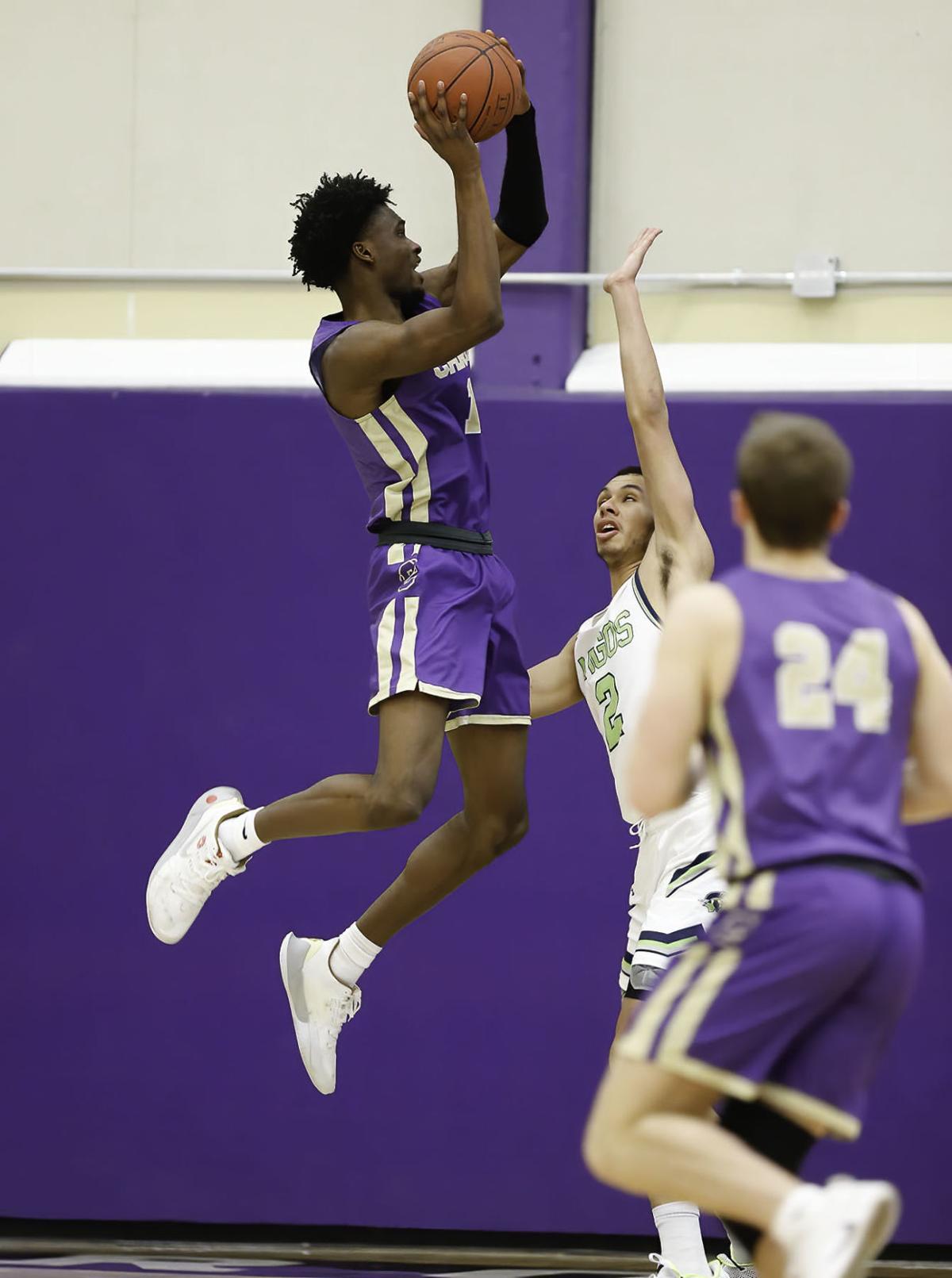 Carroll's Ifeanyi Okeke looks to score the basketball during a game against Providence last season. 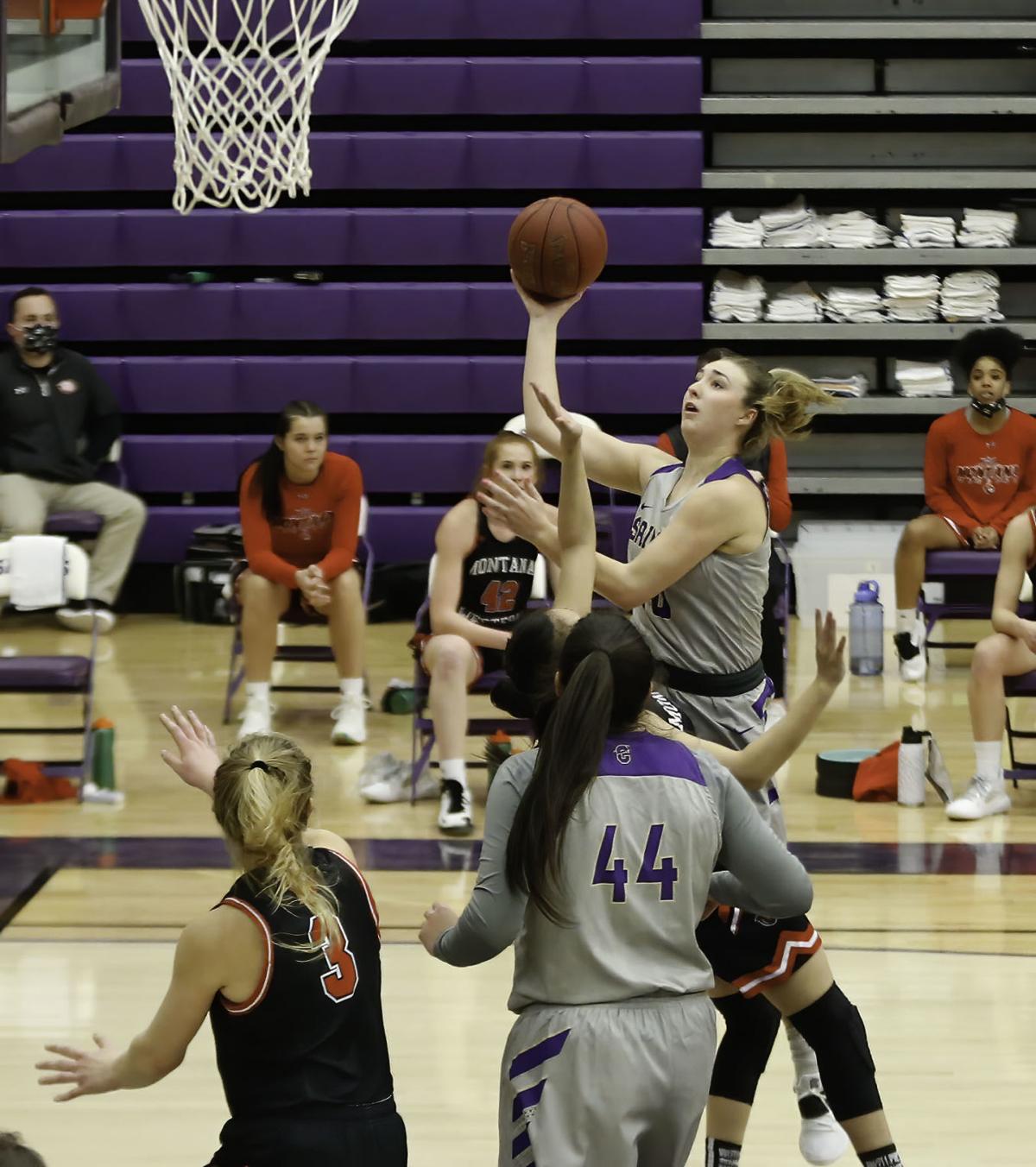 Carroll's Christine Denny attempts to score the basketball in a game against Montana Western last season.

Carroll's Ifeanyi Okeke looks to score the basketball during a game against Providence last season.

Carroll's Christine Denny attempts to score the basketball in a game against Montana Western last season.

HELENA — For the first time since the COVID-19 pandemic began, the bleachers of the PE Center accommodated fans for a Carroll basketball event. Four days before the men tip off their season and a little less than two weeks before the women do the same, both Saints teams took to the court for the annual purple-gold scrimmage.

“It felt good, it was exciting,” Carroll junior Ifeanyi Okeke said. “It’s been a whole year. We build energy off each other, but it’s different when we have fans. It felt good to be back out there with fans.”

Okeke, who was a member of the white team, was all over the court on Monday night. He pulled out some post moves, but also showcased a polished mid-range jump shot that netted him multiple buckets. Okeke also rose above the rim and slammed down some thunderous dunks, a couple on fast-breaks, and one on a designed lob play.

“Ifeanyi has been playing really well this whole fall,” Saints head coach Kurt Paulson said. “He’s gonna have a big year. He should be a guy we can count on every night...He’s versatile and he’s so athletic. He’s a weapon, for sure, on both ends of the floor.”

Okeke earned co-sixth man of the year honors as a sophomore, averaging 7.3 points and 4.7 rebounds per game. He has started a combined 19 games in his two seasons with Carroll, but has played important roles each year. He is athletic enough to guard nearly every position on the court, and skilled enough offensively to find ways to put the ball in the hoop. Throw in a mid-range game like he was displaying on Monday, and he becomes difficult to stop. His work this summer has earned him a spot in the starting lineup, according to Paulson.

“Most of my emphasis this summer was just to work on my mid-range game,” Okeke said. “I feel like that’s something that can help me get to the rim easier. It just makes the game a lot easier for me. Building strength, gaining weight. I started my freshman year for a few games, so it’s not anything new, but it feels good to be back in the starting lineup.”

The purple-gold scrimmage was the first time many Saints fans got to see the crop of newcomers on Paulson’s team. All of the incoming freshmen saw playing time on Monday night. Both Garrett Long and Andrew Cook suited up for the white team.

Long was the primary ball-handler when the Saints were running point guard Shamrock Campbell off screens and he was the one who found Okeke for a couple dunks. Cook shot the ball well off-the-dribble and worked his way to the rim on occasion.

“We’re gonna do that,” Paulson said of having players other than Campbell handle the basketball. “[Shamrock] has been waiting for us to get some other ball handlers, give him a break every once in a while. That’ll be nice for him to have that this year…

“[The freshmen] did look good. We knew they were going to be good, so that kinda reassures us. It’ll be an exciting group and we’ll add the young guys to the vets and we’re hoping we can mesh them.”

Paulson said his team scored the ball well during the scrimmage, but that means there is work to do defensively. This Saints team looks like a group that will hang its hat on the defensive end of the court, but with some young players, staying disciplined on that end of the court will be key.

For the Carroll women, a team laden with seniors, Monday was the final purple-gold scrimmage for players like Dani Wagner, Christine Denny, Emma Madsen and Jaidyn Lyman who exercised their extra COVID-related eligibility.

“Coach kinda said it to us, but for us seniors, we know what the drill is every single time we step on the floor, especially the first scrimmage like this,” Wagner said. “We had a little bit of nerves, but I think we’re all just ready to go.”

Saints head coach Rachelle Sayers said she was pleased with the effort from her group in a scrimmage that is used to gauge conditioning and how well players know and understand the offense. Sayers said her team showed some nerves on Monday night, but that she feels her team is ready to go with a little less than two weeks before the first game to clean up some stuff.

“I think we’ve gotta get in a little better shape,” Sayers said. “I think we’re really gonna have to really start locking in on some zone, we’ve worked a lot of man-to-man. We’re going to see a lot of zone, so we’ve gotta be prepared for that. We’ve just gotta take each day and find a way to get better. These guys are hungry to get going, but once we start games, we don’t have a lot of practice time...We’ve gotta use this next week and a half to really get ready.”

Like with the men’s team, it was the first time the women had played in front of a home crowd since the pandemic began, a long enough time for the return to normalcy to feel strange.

“It was different. We’ve kinda been used to a silent gym, maybe one or two people in the gym watching us,” Wagner said. “It brings a little bit of nerves but I think we’re all excited for that energy to come back into the gym.”

On Friday, the Carroll men will do the honors and tip off the 2021-22 basketball season against Yellowstone Christian College. The women will follow eight days later on Oct. 23 when Southeastern University visits the PE Center.

In a lot of ways, the purple-gold scrimmage was the last thing standing between Carroll’s basketball teams and the start of the season. Now, the real games against different opponents can begin.