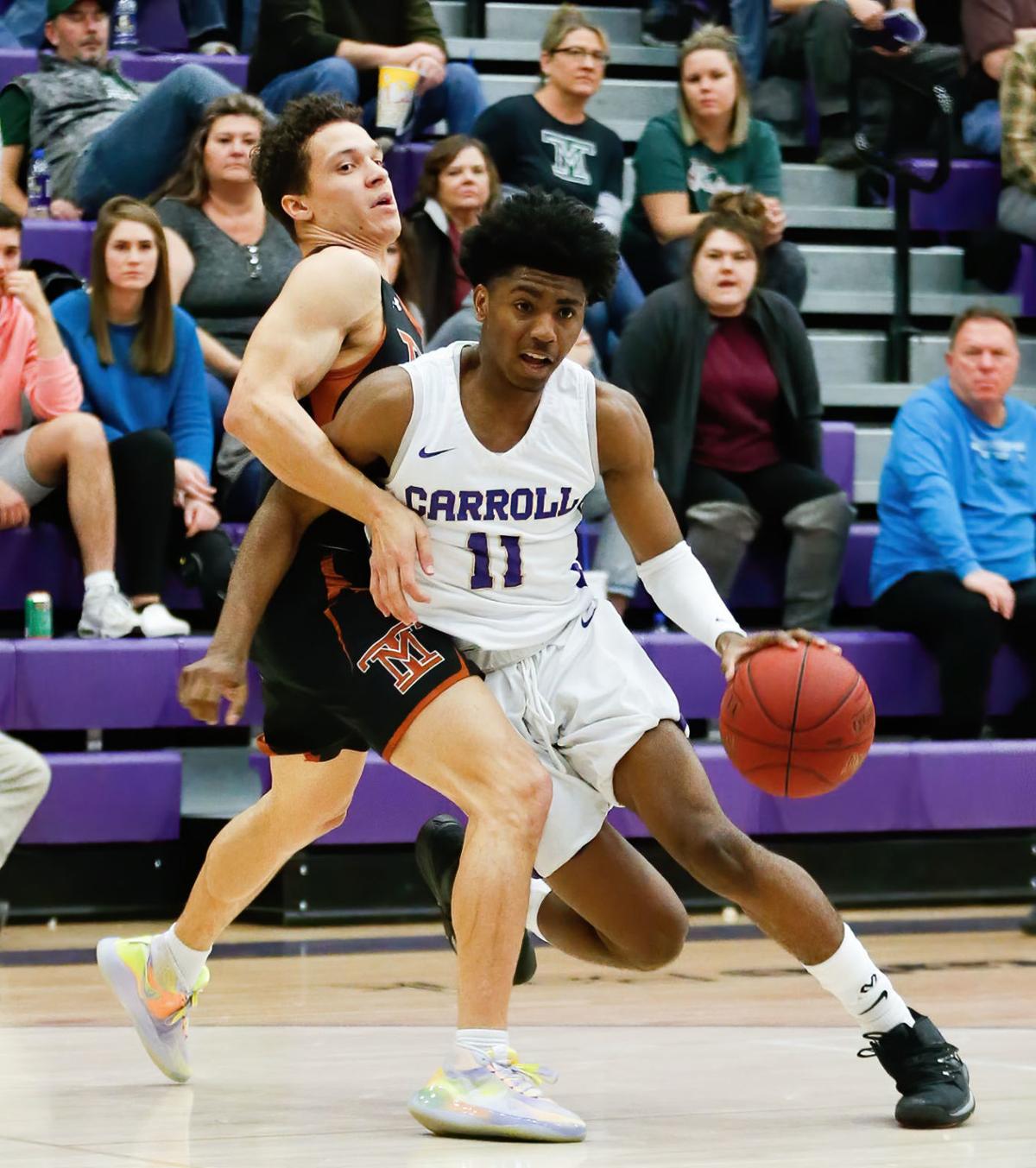 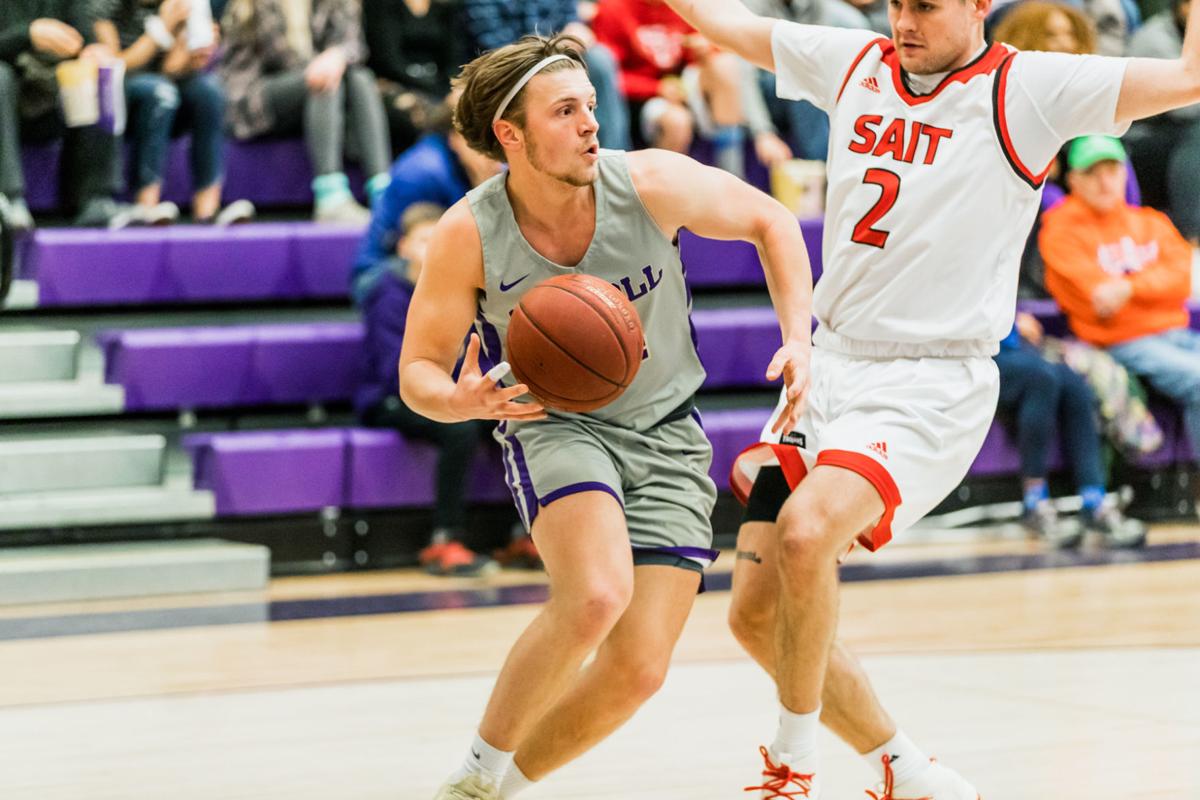 Carroll College freshman forward Jonny Hillman drives to the hoop last month in Helena. The Saints return to the PE Center on Saturday to host No. 7 Providence at 7:30 p.m.

Carroll College freshman forward Jonny Hillman drives to the hoop last month in Helena. The Saints return to the PE Center on Saturday to host No. 7 Providence at 7:30 p.m.

HELENA — University of Providence junior guard Zaccheus Darko-Kelly has had a fruitful career playing in the Frontier Conference.

He has won conference Freshman of the Year award, was selected to the NAIA All-American second team and now is averaging 21.4 points per game.

Teams know what to expect.

The Saints’ youthful rotation features six freshmen and two sophomores who will face Providence (15-0, 3-0 Frontier) on Saturday night and have never played against Darko-Kelly.

“Our team is so young and confident that they don’t know any better, and I love it,” Paulson said. “They haven’t seen some of these teams or players and they just think it’s another game.”

There is one player on the roster that has seen what Darko-Kelly can do first hand.

Carroll senior guard Dane Warp squared off against Darko-Kelly during the 2017-18 season. Their last meeting was in the Frontier Conference Tournament title game where Darko-Kelly was held to 16 points.

Warp had help that game from teammates Matt Wyman and Ife Kalijaye.

And that’s exactly how Carroll (12-3, 3-0 Frontier) plans on containing Darko-Kelly this time around.

“We have to play team defense,” Paulson said. “We can’t just try to stop him with one guy.”

Not only has Darko-Kelly shown athleticism at the rim but also the ability to hit a 3-point shot and find teammates.

This season he has made 48 percent of his outside shots and leads the team averaging 5.1 assists per game.

But Paulson thinks his team is up for the challenge.

Even during the Saints’ NAIA Tournament run, they ran into Oklahoma City’s Chris Williams averaging 19.2 points per game.

“It’s going to be a good test for us,” Paulson said.

Darko-Kelly should not be a new name for those who have followed Frontier Conference men’s basketball over the last three years.

Coach Steve Keller recruited him out of Missoula Sentinel High School, where he was a Western AA All-State guard averaging 16 points a game.

After spending two years at Montana Western, he followed Keller to Providence but, because of NAIA transfer rules, was forced to sit out all of the 2018-19 season.

His return to the court last October proved he didn’t miss a beat, putting up 23 points in the season’s debut against the University of Lethbridge.

Now, he leads the undefeated Argos in every offensive category.

And that’s not to mention his surrounding cast that includes point guard Brandon Cotton putting up 15.5 points per game and forward Jaxon Hashley posting 9.4 points and 6.1 rebounds.

So, what do they need to do to take down the Argos?

Warp said the home court advantage will help, but it will come down to containing Darko-Kelly.

“A win would be huge for us,” Warp said. “The goal each season is to protect your home court, and this game is no different. It’s just what we have to do.”

Carroll has won the last six games against Providence dating back to 2015 and has compelled an 63-6 record (.913 winning percentage) over the last five seasons.

The Saints have won their last three games including a 63-49 win over Montana State Northern on Tuesday night.

But the Saints knows Providence will be a tough test.

The Argos are led by the duo of point guard Emilee Maldonado and post Parker Esary who both claimed their 1,000th career point last week.

Carroll is led by junior guard Danielle Wagner who is averaging 14.4 points per game.

Ryan Kuhn: Carroll’s Jovan Sljivancanin might give Zaccheus Darko-Kelly run for his money for Frontier player of the year

HELENA — University of Providence junior guard Zaccheus Darko-Kelly stands in a league of his own.

How much spring football practice did Big Sky Conference teams get in, and what does it mean