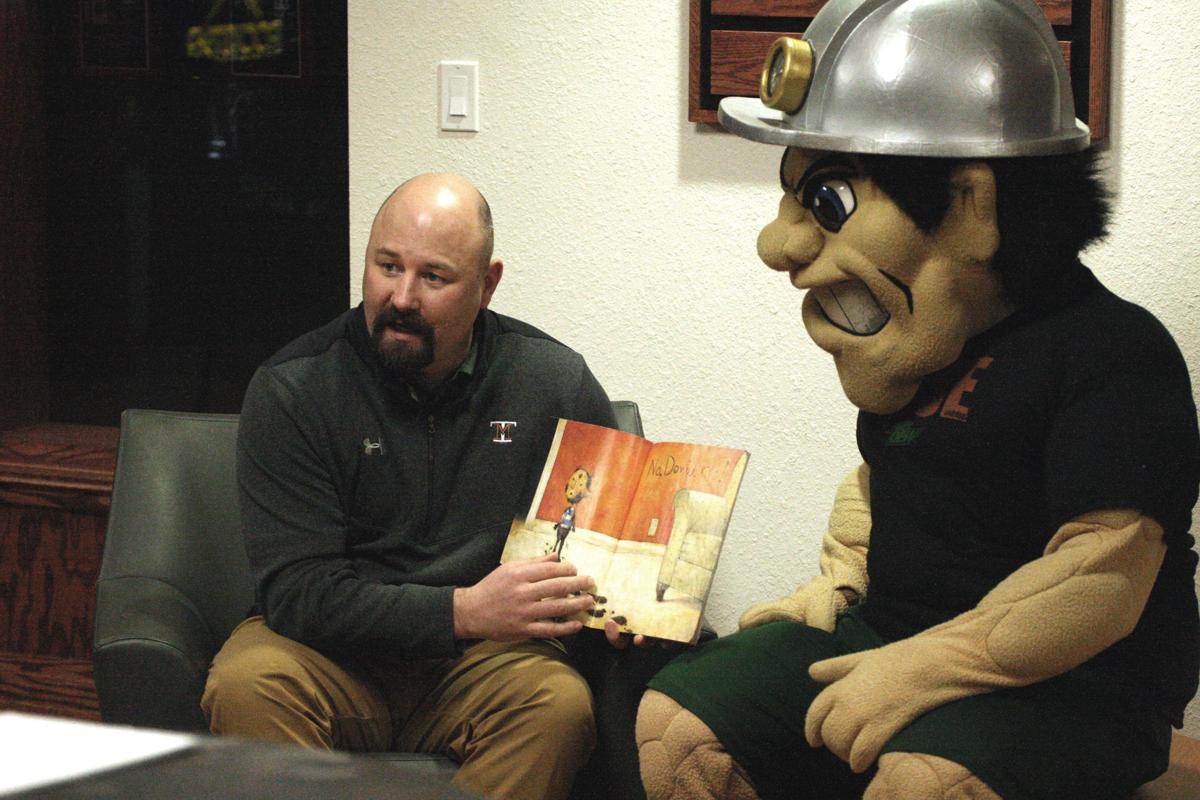 Montana Tech athletic director Matt Stepan and "Charlie Oredigger" read to the camera during a video shoot. The Orediggers’ “Together We Learn, Together We Rise” started with the idea to shoot one video,” Stepan said. “’How cool would it be for Bob Green to read a story like "Goodnight Moon?'' But then it took off when coaches jumped in and asked, ‘How can I help?’ 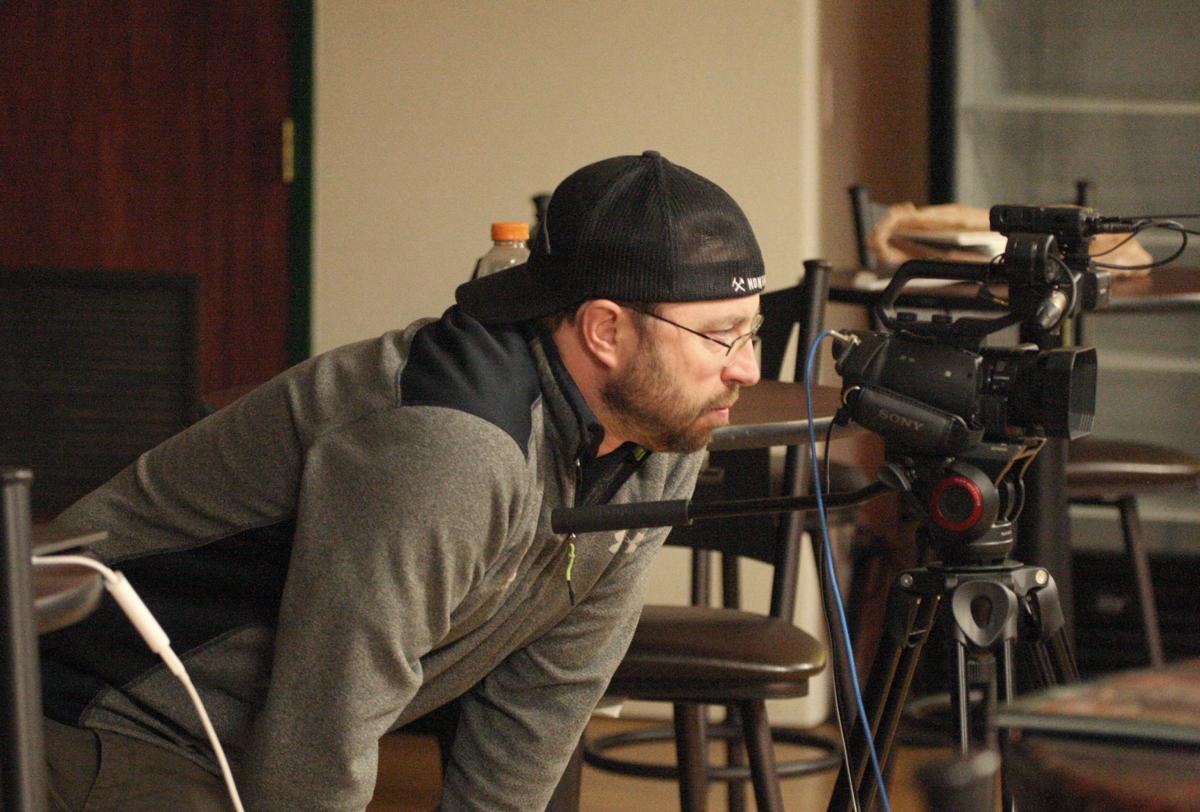 Montana Tech athletic director Matt Stepan and "Charlie Oredigger" read to the camera during a video shoot. The Orediggers’ “Together We Learn, Together We Rise” started with the idea to shoot one video,” Stepan said. “’How cool would it be for Bob Green to read a story like "Goodnight Moon?'' But then it took off when coaches jumped in and asked, ‘How can I help?’

There’s a fun atmosphere in the HPER facility as Montana Tech’s crew prepares to film.

The production and talent aren’t necessarily in their element. Orediggers athletic director Matt Stepan, sitting in front of the camera, is told to speak up into the lavalier mic pinned to his shirt, while head golf coach Sean Ryan plops on the head of “Charlie Oredigger,” Tech’s mascot.

At this point in the spring semester, Stepan, Ryan and associate executive athletic director Nick Bowsher are typically in the midst of the spring sports season, but with spread of COVID-19 sending students home and canceling winter and spring sports, the three have been part of a new team effort.

“It started with the idea to shoot one video,” Stepan said. “’How cool would it be for Bob Green to read a story like "Goodnight Moon?'' But then it took off when coaches jumped in and asked, ‘How can I help?’

“It’s a way for people to tune into something and take their mind off everything else going on. What started off as a one-off with [former football head coach Bob] Green has taken off into something bigger and something that the public is really enjoying.”

Is there anything better than Coach Bob Green reading your a story?! I don’t think so! 🌙⚒📚#TogetherWeLearn #TogetherWeRise https://t.co/IiARsZjtks

Now, less than three weeks removed from the sudden shift in work and process, Tech’s athletic department is putting out near-nightly videos of coaches and staff reading children’s stories, while also releasing PSAs on good practices to combat the spread of COVID-19.

For Ryan, helping out in front of and behind the camera is nothing new. The former Oredigger golfer has gone on to become head coach of the program as well as Tech’s director of basketball operations, and says the variety of tasks he takes on makes each day special.

“We get to be involved at Tech in so many different aspects,” Ryan said. “Currently sitting on a couple of campus recovery and student activity committees, wearing a variety of different hats makes coming to work a different opportunity every single day. I don’t quite know what I’ll end up doing. I might shoot a video at 1 p.m. or be creating infographics that can tie into the community.”

Remember you can support & make an impact on Digger Athletics at the following link:https://t.co/tQYrbw6Bby https://t.co/euu6TTilu6

On this particular Monday, Ryan takes on the role of Charlie Oredigger. While Stepan reads, Ryan follows along like the children watching at home.

Meanwhile, Bowsher is adjusting the camera and checking his laptop. Bowsher, like Ryan, balances several different responsibilities, but is the crew’s cameraman, directing and ensuring that the visuals and sound are up to par.

“I have a background from college doing TV production,” Bowsher said. “Plus, I’ve been in charge of all of the game operations on the Jumbotron and with streaming over the last six to seven years."

Bowsher’s background is coming in handy as he navigates wires and screens, but the nine-year member of the Orediggers’ staff says it’s the Mining City’s knack for eye-catching acts that has propelled Tech’s athletic department to making videos.

“There’s great unity in Butte,” Bowsher said. “The other part of Butte pride is doing things big. We’re going to shoot for it and when [the opportunity] comes up, we’re going to keep producing bigger and better stuff.”

The arrival of uncertainty has shifted Tech’s athletic landscape in a variety of ways, and many of the impacts and changes are likely not tangible or visible yet.

But the Orediggers are not worried about “ways to win” off the playing field, says Stepan and Montana Tech football head coach Kyle Sampson.

Instead, the first priority is ensuring the safety of their students and doing what they can to uplift the Oredigger community.

“We want to be close with the people in Butte,” Sampson said. “’What are some good ways we can reach out to the young kids in Butte and across the state?’ We want to represent this community well. Anything we can do, especially in these times right now, to help out… Personally, my three little kids look forward to every night when we put (the videos) out. It’s been a cool thing.”

Instead of visiting recruits and meeting with the Orediggers in spring practice, Sampson and the athletic department are answering questions about video length and social media optimization.

Coach Kyle Samson reading “Just Me and My Dad” to Charlie and Orediggers everywhere for the #TogetherWeLearn #TogetherWeRise campaign! ⚒🏈📚

Remember you can support and make an impact on Digger Athletics af the following link:https://t.co/tQYrbw6Bby pic.twitter.com/ssbt2yzzzT

“We had to make sure we kept the videos below the two minutes and 20 seconds that Twitter will allow,” Sampson said. “My kids are big "Berenstain Bears'' fans and we couldn’t do those because they’re a little long, but I’m a big Mercer Mayer fan so that was a big one for me to read.”

The chance to provide community outreach and positivity has put Tech’s athletic department into high-gear, as Sampson and company balances the need to monitor and assist student-athletes with a new task of making more videos, as one of Tech’s first videos hit over 6,500 views since being posted on Facebook.

Stepan says that the Orediggers’ “Together We Learn, Together We Rise” initiative is just starting, and plans are in the works for more types of videos.

Coach Bob Green (@coachbobgreen) has an imporant message about how to properly wash your hands for the #TogetherWeLearn #TogetherWeRise campaign! Thanks to the Butte-Silver Bow Health Dept. for the great advice to keep us safe and healthy! ⚒️⚒️⚒️https://t.co/tQYrbvOZMY pic.twitter.com/b2QNurF1K7

“We’re not done,” Stepan said. “We’re going to continue to put out the stories, do other learning activities, physical activities like ways to get a workout in at home and stay physically fit in your own basement or yard.

“Really, what we’re trying to do is reach out to our community to let them know we’re here.”

DILLON — The challenge that Montana Western football faces is the same as many programs across the country: uncertainty.