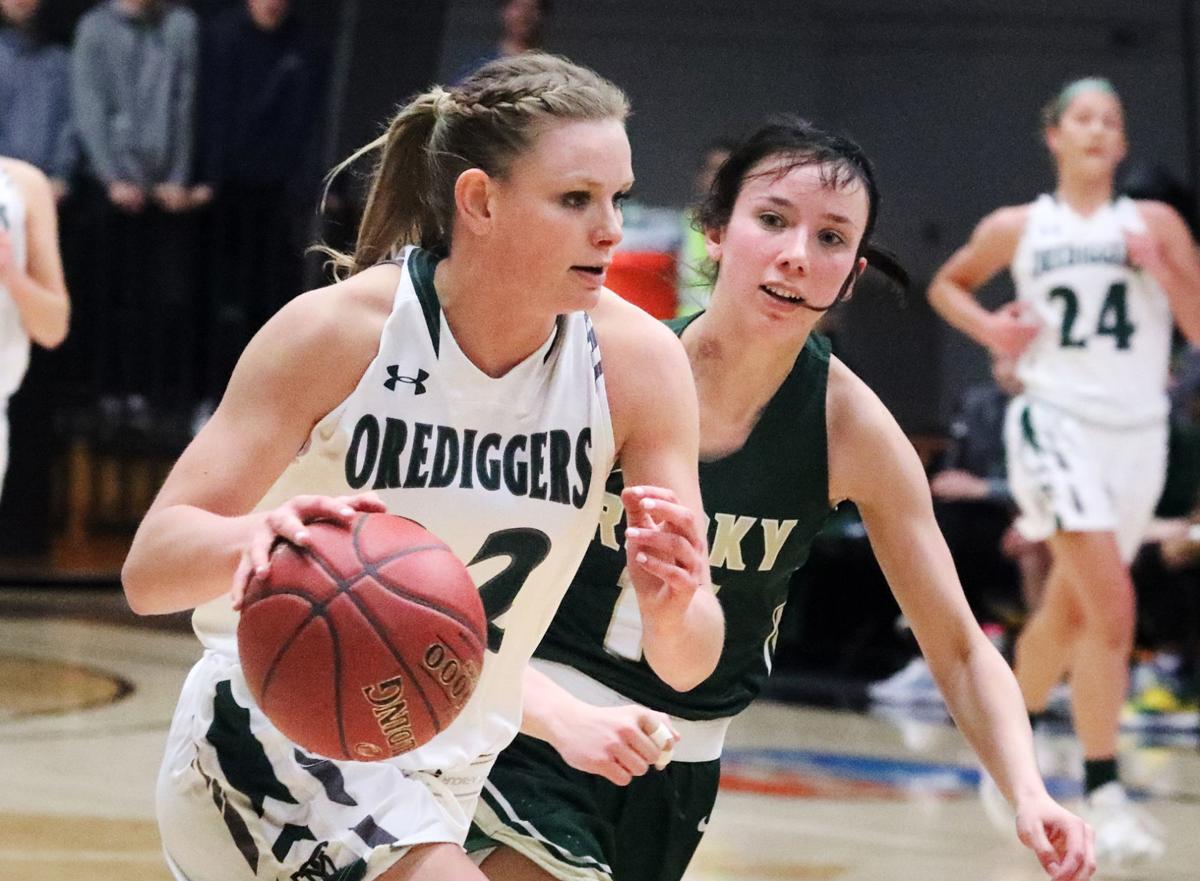 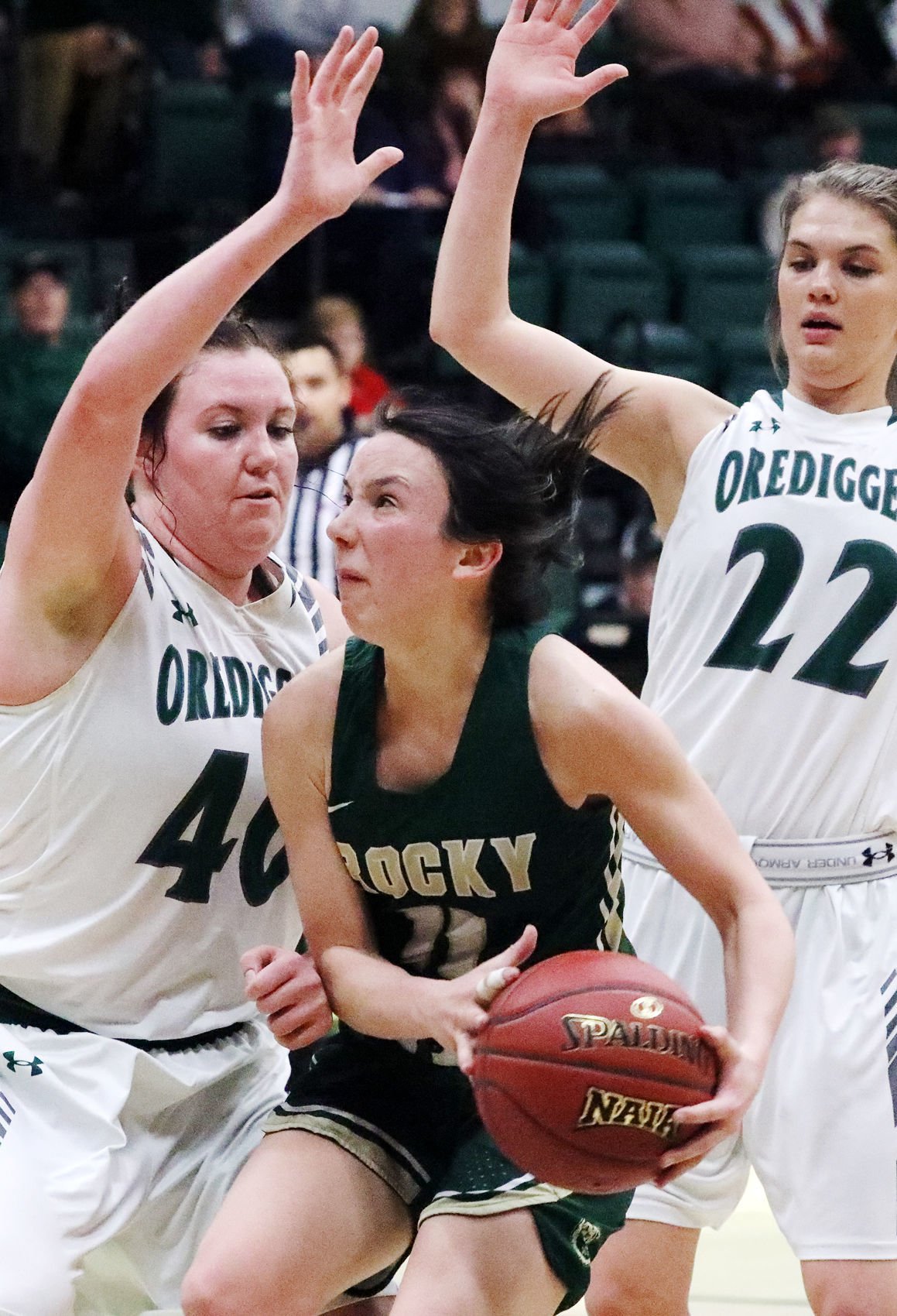 Tech's Kaylee Zard and Dani Urick defend as Rocky's Kloie Thatcher takes the ball to the hoop on Thursday evening in Butte.

Tech's Kaylee Zard and Dani Urick defend as Rocky's Kloie Thatcher takes the ball to the hoop on Thursday evening in Butte.

BUTTE — Another close game at Kelvin Sampson Court ended in another tight loss for Montana Tech.

Rocky Mountain College defeated the Orediggers 63-52, as the Battlin’ Bears took a late advantage in the fourth quarter to bounce back from back-to-back losses and improve to 13-5, while dropping Tech to 11-8 on the season.

“Francis had a huge night,” Keller said. “She was five-for-five at half, obviously we want to get her all the touches we can… [Pointer] came in and did a great job, she got 20 off the bench.”

In a 40-minute contest that both teams felt they could have played better, the first 10 minutes were probably the messiest.

However, the Orediggers simply didn’t shoot well enough to take advantage, only ahead 11-8 after one quarter, and the largest Tech leads coming at 16-10 and 23-17 despite Sanon’s squad getting opportunities for a large halftime advantage.

Both teams turned up the heat in the third quarter, with Tech’s Williams going off for 11 points in just a handful of minutes and Rocky sophomore and Butte Central alum Kloie Thatcher had a six-point quarter with a big trey to make it a two-point game.

Montana Tech head coach Carly Sanon said that her team has to find a way to finish to snap the Orediggers’ losing streak, which now sits at six straight games.

“We just kind of stumbled in the last three minutes,” Sanon said. “Last weekend we lost both games by a total of four points, it came down just to the end. Today, we’re ahead most of the game, but we need to finish games.”

Tech’s inability to distance themselves from the Bears eventually came back to haunt them, as Rocky duo Francis and Pointer hit several big shots down the stretch to give the Bears an initial advantage, before an Antuanisha Wright three-pointer made it 53-48 with just under two minutes to play, a big enough gap for Rocky to maintain as the game drew to a close at 63-52.

Keller discussed the importance of heating up offensively late, and how tight the Frontier Conference is at the moment.

“You look at our last three games,” Keller said. “One was an overtime game, one was a one-possession game, the other was a three-point game late, so it comes down to executing at the end of the game and players stepping up and making plays.”

Rocky was led by Francis’ 20, which Pointer matched off the bench, knocking down two treys in the process. Thatcher’s third-quarter explosion helped her reach 11 on the night, rounding out the Battlin’ Bears’ top scorers.

For the Orediggers, Williams’ 20 separated her as the only double-digit scorer for Tech, with sophomore Dani Urick and senior Kaylee Zard contributing nine points each. Junior Mollie Peoples added eight points to Tech’s total.

“I thought Mesa [Williams] was really steady on the offensive end,” Sanon said. “Of course Tavia [Rooney] had 14 boards, and then Kaylee [Zard] had nine and 11, was close to a double-double tonight and played well for us.”

Tech takes a short breather before welcoming Montana Western to the HPER Facility on Saturday, while Rocky stays on the road, traveling to Lewiston, Idaho for a clash against Lewis-Clark State.