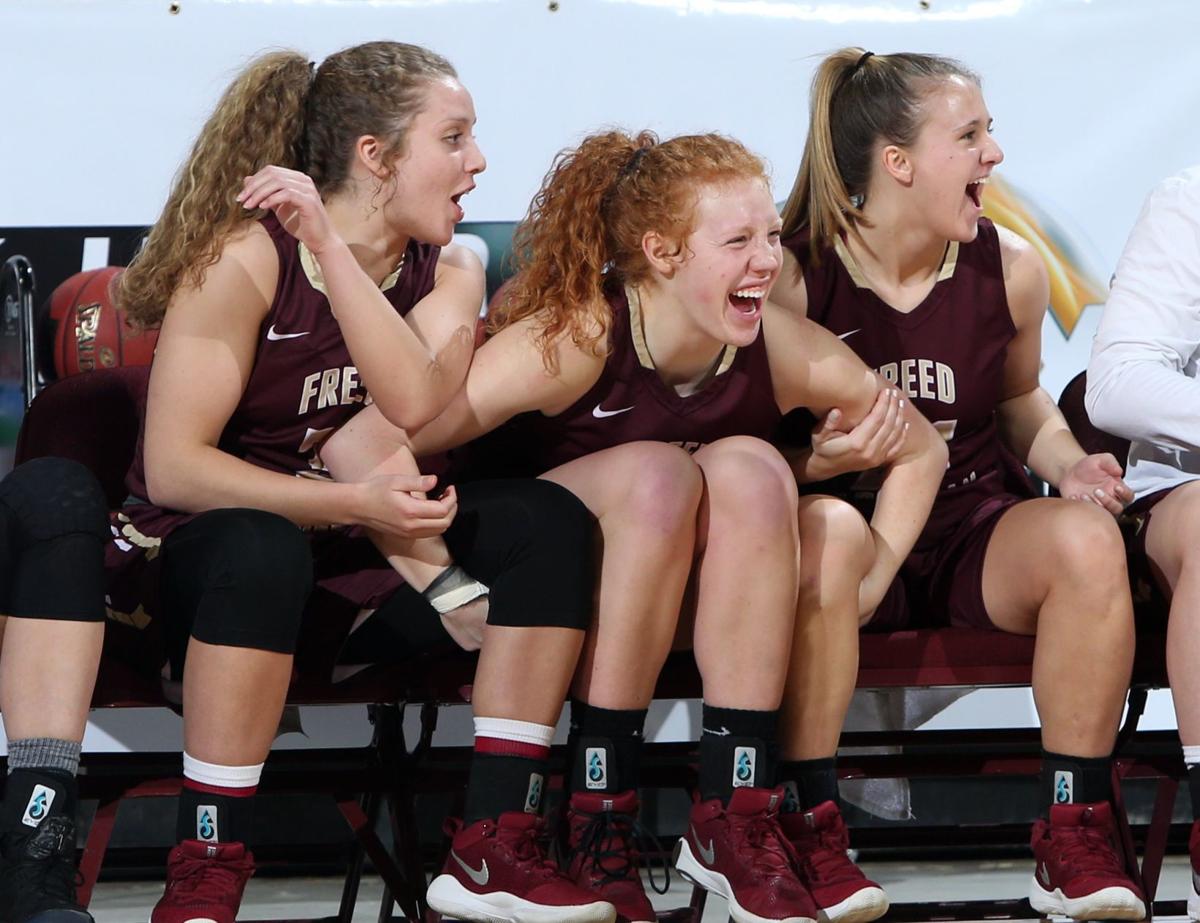 Freed-Hardeman players react in the final minutes of their semifinal win over Montana Western at the NAIA Division I Women's Basketball Championships at Rimrock Auto Arena at MetraPark on Monday. 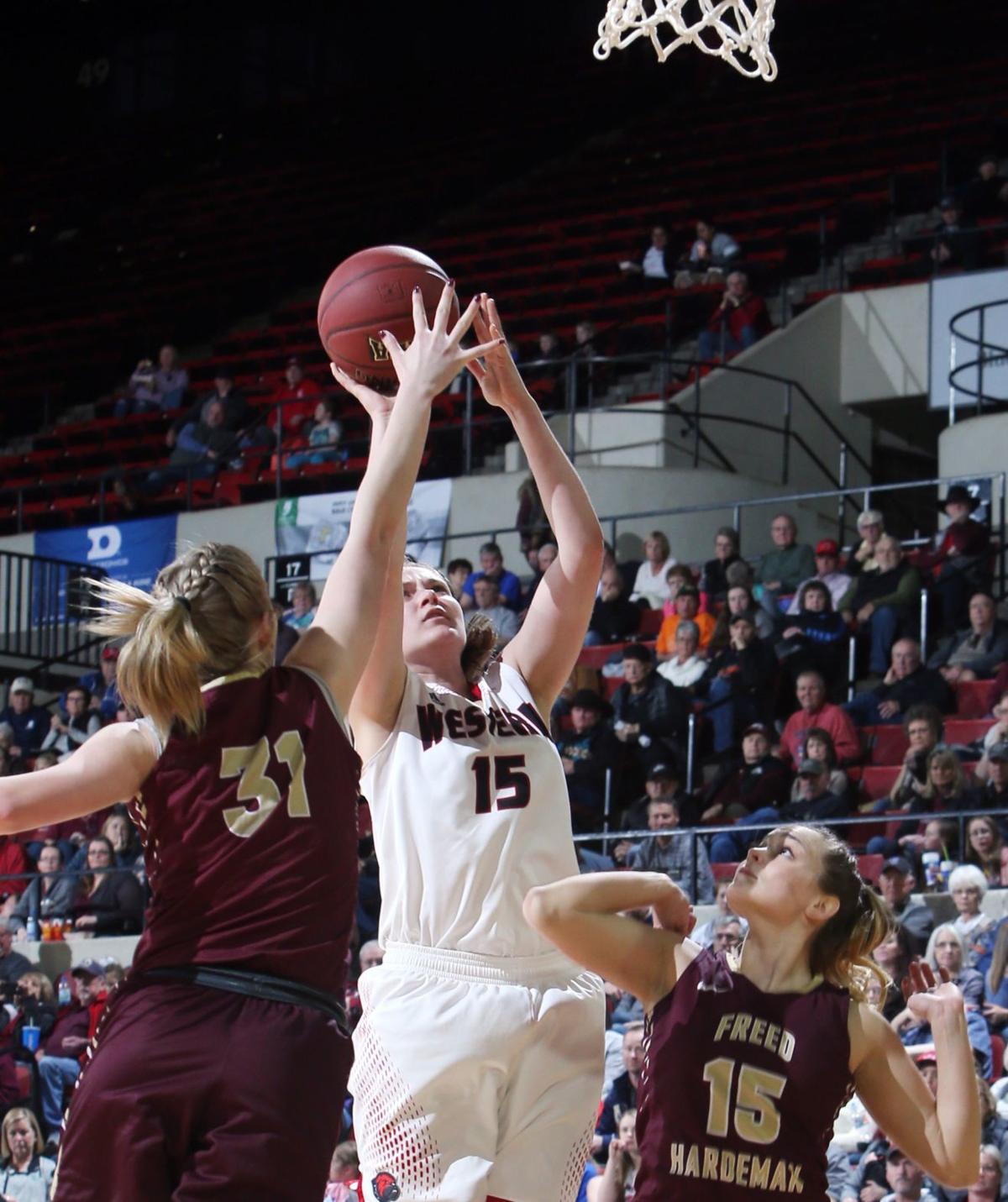 Montana Western's Britt Cooper puts up a shot over Freed-Hardeman's Tiffany Pate (31) and Carrie Hatchel (15) in a semifinal game at the NAIA Division I Women's Basketball Championships at Rimrock Auto Arena at MetraPark on Monday.

Freed-Hardeman players react in the final minutes of their semifinal win over Montana Western at the NAIA Division I Women's Basketball Championships at Rimrock Auto Arena at MetraPark on Monday.

Montana Western's Britt Cooper puts up a shot over Freed-Hardeman's Tiffany Pate (31) and Carrie Hatchel (15) in a semifinal game at the NAIA Division I Women's Basketball Championships at Rimrock Auto Arena at MetraPark on Monday.

And that was just fine for the Freed-Hardeman’s women’s basketball coach.

Because long nights watching video are a byproduct of one thing: Winning.

The Lady Lions advanced to the championship game of the NAIA Division I Women’s Basketball Tournament with a 61-50 win over Montana Western Monday night.

“Dr. Pepper,” said Neal of what fuels his late-night scoring sessions. “We might have to stop at the store. I think I’m down to one.”

Freed-Hardeman (32-4), ranked No. 2 in the final regular-season NAIA Top 25 poll, last played in the title game in 2014. The Lady Lions are making their 22nd consecutive appearance at the national tournament.

Photos: Montana Western falls to Freed-Hardeman in the NAIA semifinals

Montana Western takes on Freed-Hardeman in a semifinal game of the NAIA Women’s Division I National Championship at Rimrock Auto Arena at MetraPark.

“We wanted to take away what they do best, penetration and hitting wide open 3’s,” said Sylman of defending the Bulldogs. “We try to make teams do what they don’t want to do.”

Sylman was quick to credit Neal’s scouting reports for the Lady Lions’ success.

“Preparation,” she added. “Coach gets us well prepared. “We know what everybody is going to do before they do.

“Coach is losing a lot of sleep.”

Freed-Hardeman turned a flurry of UMW turnovers into a 19-6 first quarter lead.

“We were tight,” said Bulldogs’ coach Lindsay Woolley. “We made some uncharacteristic turnovers early.”

UMW got within 30-26 by halftime but the Lady Lions turned another handful of UMW turnovers into an 11-4 run to extend their lead again.

“I knew they would keep playing hard,” Woolley said of his team. “They just guard you so hard. They are a well-coached team. Any time you get down to a good team like that, it’s hard to come back.”

Sylman, elevating over UMW defenders, finished 11 of 23 from the field with a pair of 3-pointers. Kim Mallory added 12 points, while Tiffany Pate had 15 rebounds, three steals and three blocked shots.

“I’m a mid-range player,” Sylman said. “I’m pretty comfortable there. I had a different mindset for this game … lock down on defense and attack.”

Brianna King led the Bulldogs with 22 points, while Cierra Lamey had 10. Britt Cooper finished with 12 rebounds.

UMW returns all five starters for next season. “I know this will motivate them for next season,” Woolley said. “Hopefully, we can add a few more pieces in the offseason.”

While Woolley was already looking toward the future, Neal was preparing for another marathon video session.

“I was up to 1 a.m. one night and 4 a.m. another,” he said of his tournament week. “On Sunday, we had a little longer to prepare. The players went to the ski lodge (Red Lodge) and I stayed back to watch film.

“This might be a long one. We haven’t seen these two teams.”