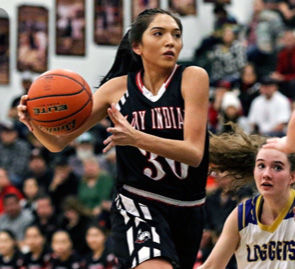 Browning's Dulci Skunkcap was a first-team all-state player and led the Indians to a 28-2 record against Northwest A competition in her career. 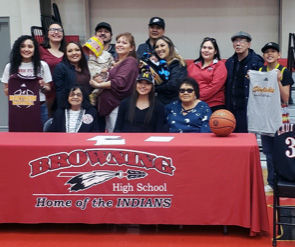 Dulci Skunkcap is surrounded by family as she signs her letter of intent to play basketball at MSU-Northern.

Browning's Dulci Skunkcap was a first-team all-state player and led the Indians to a 28-2 record against Northwest A competition in her career.

Dulci Skunkcap is surrounded by family as she signs her letter of intent to play basketball at MSU-Northern.

Skunkcap earned all-state and first-team all-conference honors as a senior. She also was voted Class A Northwest Most Valuable Player.

Skunkcap helped her teams earn Class A state tournament bids in 2018, 2019 and 2020. She was the team’s “Miss Defense” in 2018, a two-year team captain, and led the Indians in assists and steals as both a junior and senior.

As a senior, she averaged 12 points, 4.8 rebounds, 3.4 assists and 2.7 steals per game. She was fourth in the state in assists and ranked in the top 10 in six statistical categories in the Northwest A.

For her career, she scored over 500 points and her teams were a combined 28-2 in Northwest A competition.

“Dulci is a great addition to our program” Mouat said. “She has good length, sees the floor very well, and has a good all-around game. She can really get to the rim and has the ability to be very explosive. I like the fact that she can play a number of positions on the floor and love her competitiveness. She comes from a basketball family and a strong program in Browning.”

Skunkcap was also a two-time all-conference honorable mention middle and outside hitter in volleyball. A two-time team captain and team Most Valuable Player, she led Browning in blocks and kills for two straight seasons.

Skunkcap carries a 3.9 grade-point average and plans on majoring in health promotion or biology. She hopes to later attend physical therapy school.